The wee parking area on the B8077 just off the A85 contained road laying vehicles so parked on the verge beside the gate to the old quarries track. Not long after setting off along the track a herd of highland cattle was blocking the way ahead - early morning feeding time. Discretion being the better part of valour, I took a wide detour through some boggy ground before getting back to the track.

Followed the track round into the start of Coire Chreachainn.

The track branched off up Coire Chreachainn and I went left up the hillside into Coire Ghlas.

The track seemed to go on further than was marked on the map but I knew I had to pick a spot and head up towards Monadh Driseig. Couldn’t see a track so just headed up the hill - very steep at times with hands needed off and on.

Looking towards Beinn a’Bhuiridh from the ascent 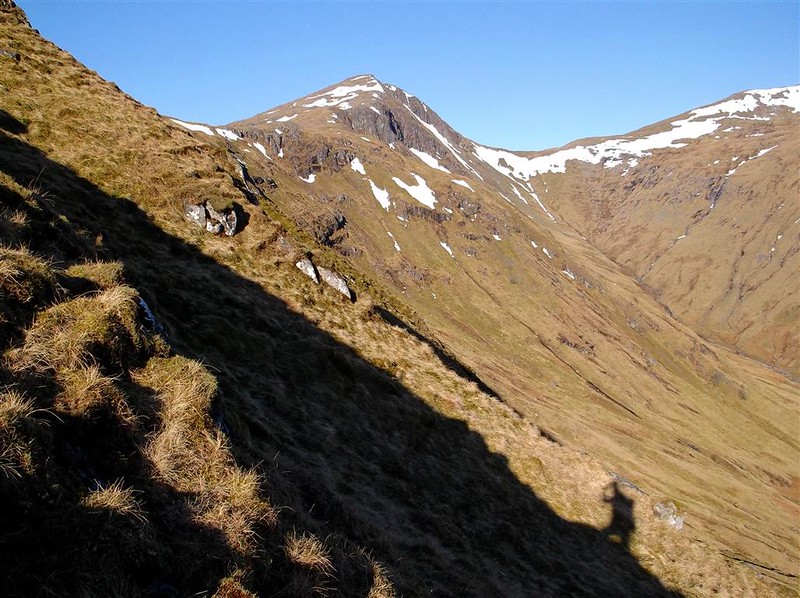 Took some time but eventually got up to the top and went past Monadh Driseig. Beinn a’Bhuiridh wasn’t too far away but looked as though there were some snow patches to avoid - was still carrying full winter gear just in case.

Up around some crags and stayed to the left to avoid most of the snow patches.

Got to a wee cairn then headed further to the west to get to the summit cairn.

Had a break and sat in the sun before heading back. Had thought about descending via Coire Ghlas but decided just to head back down via Monadh Driseig.

Back on the track, the cattle were dispersed across the field and on the track - had no choice other than to walk through them this time.

Back at the car there were several other cars parked along the B8077. Got ready and drove back along the A85 then up the B8074 Glen Orchy road to the lay-by at the Eas Urchaidh falls.

Had some more food, got ready and set off over the bridge. Met two canoeists and saw some more canoes sitting at the side of the track. Followed the mountain biking trail up though the forest.

Glimpses above the trees of where I was heading.

From here on there were more signposts so just followed them rather than take a possibly incorrect route in the trees.

More glimpses above the trees.

Headed northerly up into Coire Chailleach.

Steep section before getting to the top where there was a fairly flat walk to the summit cairn.

Stopped for a break in the sun and to eat some more food. Then set off back down towards the trees. Had been thinking about adding on the Graham, Beinn Donachain on the return leg. However, it would mean an extra 350m or so of ascent and a longer walk back to the car - decided that I’d had a good enough day and so just headed back to the style and the walk back through the trees.

Back to the car, got ready and drove up the rest of the Glen Orchy road to the A82. Don’t think I’d been up this road before - it’s a nice drive and there were many cars parked with tents up at the side of the road. Nice weekend for it.

Two nice Corbetts by the look of it, RH. Funnily enough, I drove past the parking spot for Beinn a'Bhuiridh this morning, and would have fancied giving it a go, but didn't want to be too late home with work tomorrow, so made do with a short chill-out by Loch Lomond en-route.

It looks like you had a cracking day. There were quite a few Walkhighlanders in Argyll this weekend - and it was warm!
Back in Yorkshire it's cloudy and drizzly.

What a drop dead gorgeous day you got and photos to match!

I think I saw those Highland cows at the start of climb up Beinn a' Chochuill. They're meant to be a placid breed but those horns would suggest otherwise.

Grand pics and weather , makes all the difference after a Winter of snow

The coos is fine just bawl at them if they charge

Glorious weather. Been over the first of those two (accidentally, in mist) but the second is completely new to me -lloks pretty good for an "undistinguished" peak.

A braw duo on a braw day

Lovely walk there with some crystal clear and sharp images..nice one Cheers Kenny

Strangely I don't think I've driven down that road either, but reading this and seeing the wonderful photos means I will the next time I'm up that neck of the woods.

I didn't walk at the weekend, wish I had seeing all these great reports...was cycling around Bute, twice!!

Aye, was a sore one missing out on a hike in that weather at the weekend.

Beinn a'Bhuiridh is steep from any approach (except, of course, if tackled coming off Stob Diamh...I did it on the way to Stob Diamh

) but the views are worthy of the effort.

I've still got Beinn Mhic Monaidh to do - your report makes it seem a less tiresome proposal than some of the other reports about it, so maybe I'll get round to it sooner now

I'm another one who has Beinn Mhic-Mhonaidh to do (well I have them both to do, but that hill in particular has been on my hit list for a while now

Some great pictures and thanks for posting

Collaciotach wrote:The coos is fine just bawl at them if they charge

Users browsing this forum: garypaterson, moragsmart1, past my sell by date and 69 guests