This report is dated as 17 April, but the story began nearly a month earlier. Karen (kmai1961) and I had had a successful three days walking on Mull, and then fancied taking on some nearby mainland Munros on our respective 'to do' lists. On Thursday 26 March, the weather was not cracking, and she fancied a rest. So I made an attempt on Beinn Sgulaird (using the WH route), which she'd already climbed. The higher I got, the worse the conditions became. Snow, mist, wind... I reached Meall Garbh, then found myself in a gale in which I could not move. Maybe it wasn't a sharp ridge, but the danger of being blown over onto rocks and injured, alone, unable to walk and exposed to that weather was too great. So I turned back.

Next day didn't look that promising either, but Karen was up for trying a new Munro for us both, so we set off for Elleric and Beinn Fhionnlaidh. The weather was quite pleasant as we started walking, and made our way up the ridge. Karen and a boulder on Beinn Fhionnlaidh's west ridge

Before long we were up into the clag. Higher up, we had some moments of near white-out, but visible rocks protruding through the lying snow stopped this from being total. With careful navigation, we stayed away from the edge of the ridge, and finally reached the summit. On top of Finlay's hill

We'd reached our target, so I said to Karen, "Now I say we get off this mountain before the weather gets chance to get worse". She gave me a On Saturday 28 March Karen went home, but I had one more night booked in Connel. The forecast was dire, so I stayed at low level and had a ramble around Port Appin. I drove home to England on the Sunday, knowing I had spent a worthwhile week in West Argyll, but stinging just a little bit from only having climbed two Munros during the whole trip. Before long I was feeling the urge to return to resolve unfinished business. The chance of a Thursday and Friday off work in mid April, a promising forecast, and the same room again available in Connel meant that I was heading back north after less than a month

After driving to Connel on the Thursday to arrive in sunshine, Friday saw me make my Glen Coe debut with a thunderbolt - but in beautiful, calm weather. I chose to climb from Gleann a' Chaolais. Sgorr Dhonuill behind its NE subsidiary

It was pleasant, sunny weather, but the corniced coire below the bealach for which I was heading looked menacing Moving towards the bealach

As I ascended, the snow appeared more benign (and there had been a low-risk avalanche forecast). The snow turned out to be stable, and any suspect gradients were easily avoided. So then it was up to the bealach, and a turn right uphill towards Donald's impressive looking peak. Patches of snow on some exposed sections of the path made a bit of a scramble along the boulder strewn crest the best option higher up, providing a final bit of fun before reaching the top! Then it was time for some more fun, descending back to the bealach. Ben Nevis, the Aonachs, the Mamores and Loch Leven seen when descending from Sgorr Dhonuill

Climbing Sgorr Dhearg from the bealach was technically easier, but perhaps more physical than Sgorr Dhonuill.
On reaching the second Munro, there was high cloud cover, keeping things pleasantly cool, but there were still magnificent views. Ben Lui, in the distance, from Sgorr Dhearg

The descent was made via the red peak's north ridge. This ridge assured that the superb views kept on coming. The final challenge was getting off the ridge and back to the car park via the forestry. This was not the most pleasant part of the walk! Maybe there's a better way to make the final descent from the ridge, but nothing could mar what had been a superb route.

Back in Connel, a final bonus to the day came about with one of those glorious sunsets you only see on the west coast of Scotland.

Now it was time to make that second attempt on Beinn Sgulaird. A few days earlier I'd noticed that this hill also stood out as unclimbed on Martin (Fife Flyer)'s Munro map. So I texted him and asked if he fancied coming along, and perhaps having a crack at the Corbett, Creach Bheinn, as well. When he answered, "Yes", I knew that would save me some time, effort and photo-uploading in terms of this section of the report

Cheers for that , Martin. I'd just like to add that with the superb weather, views, company, bonus Corbett and everything, it was one of those occasions which made me glad I'd been defeated at the first attempt!

There were quite a few Walkhighlanders on Beinn Sgulaird that day, so I'll just add a few photos to everybody else's! Success on Sgulaird! Mull and Loch Creran in the background 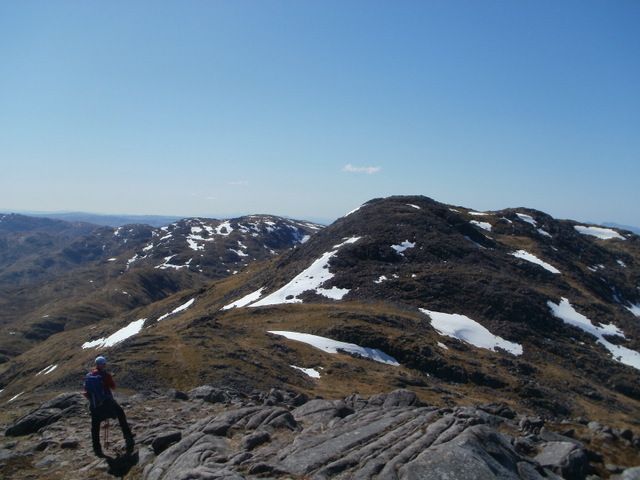 Loch Etive and Ben Cruachan, seen during the approach to Creach Bheinn Mull, Lynn of Lorn and Loch Creran from Creach Bheinn

That had been quite a day, and a real high note with which to finish my two spring trips to West Argyll. So it was time for a fine dram of a subtly peaty single malt at the Oyster Inn in Connel.

Sunday morning came, and the weather was still glorious, but it was time to go home. It would have been a shame to miss out altogether on another beautiful day in the highlands, so rather than rush back to Yorkshire, I stopped at Loch Lomond for a while to just relax and enjoy the views. It had been a memorable time in sunny Scotland!

Well done, bet it gives you the urge to do more in Glencoe now, especially seeing the views in great clarity.

Enjoyed that Simon, thanks again for the invite

I stand corrected re my map drawing skills

Only a ton left for you now

mamoset wrote:bet it gives you the urge to do more in Glencoe now, especially seeing the views in great clarity.

Thanks mamoset, two weeks in Glencoe are already booked for midsummer.

Fife Flyer wrote:Only a ton left for you now

It was great to have you along, Martin. I think the last ton could be a bit more difficult than the first ton was.

rockhopper wrote:can see why you just "had to return" !

Absolutely- I forgot to order my celebration dram of the peaty stuff on the final night of my last visit. Cheers rockhopper!