There are some days in the hills that you know will always stand out in your memory. When the weather is with you it seems to take everything to another level. This was just one of those days.

Laura, Vanessa and I set off on the second day of our walking weekend aiming for another big route but this time bagging three Munros on the Creag Meagaidh circuit. I’ve been following the SAIS avalanche blog for this one all winter and was happy to see the green ticks appear as we came towards the weekend. I don’t know what I’m going to do with my coffee breaks at work now that the blogs have wrapped up! They’ve been very informative and I’ve learnt a lot especially from the Creag Meagaidh blog.

We set off on our route from the Creag Meagaidh car park following the path up towards the whitewashed building run by SNH (with the little added luxury of public toilets). We continued up the path through the birchwoods, my legs already tired from 9hrs of walking the day before but knowing I’d get a second wind after the first summit I plodded on happily in the sun

. It wasn’t long before we realised we’d been so busy chatting away that we’d missed the cairn leading off up west of Na Cnapanan

. Instead of backtracking we picked the best spot we could and headed up on rough ground through heather and bog until we eventually spotted the line of fence posts that runs alongside the path. Already we had fantastic views of the crags of Creag Meagaidh in front of us and of Loch Laggan behind us. Once on the path it was a straightforward route up to the impressively large cairn of Carn Laith. Views back over to Loch Laggan 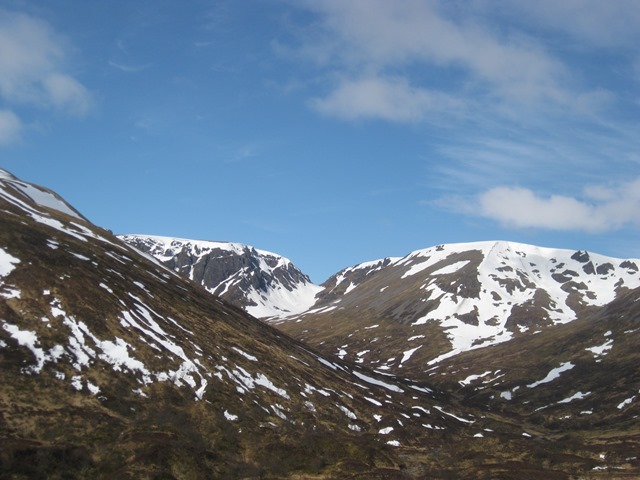 View over to the window We stopped at the summit to fuel up and I was disappointed to see that low cloud cover had formed over our intended route, blocking our previously brilliant view, and sitting low into Coire Ardair. Thankfully it didn’t last and as we set off from the summit of Carn Laith the tops cleared and the cloud disappeared as the sun burned through

. The wind was bitterly cold when it picked up but never lasted very long, leading to an on-again, off-again routine throughout the day with our windproof jackets. When it was still it was pretty much shorts and t-shirts weather!

We followed a clear path to Meall an t-Snaim, soon picking up the fence posts that lead down to the steep bealach. Before reaching it I had a bit of fun kicking steps and climbing on the side of a large snow bank that we passed. We then had to do this for real over a short section of snow on the ascent up from the bealach. We curved round the edge of the corrie with plenty of stops for taking pictures of the incredible cornices visible on route and had a brief stop at our second summit before descending down to ‘The Window’. 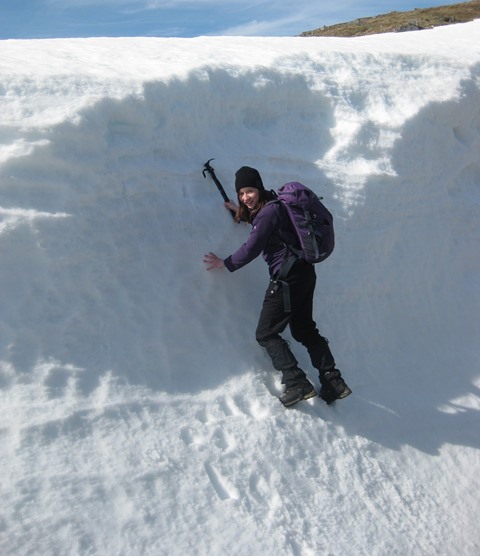 Having a play on the snow Views over to Coire Ardair Climbing up from the bealach 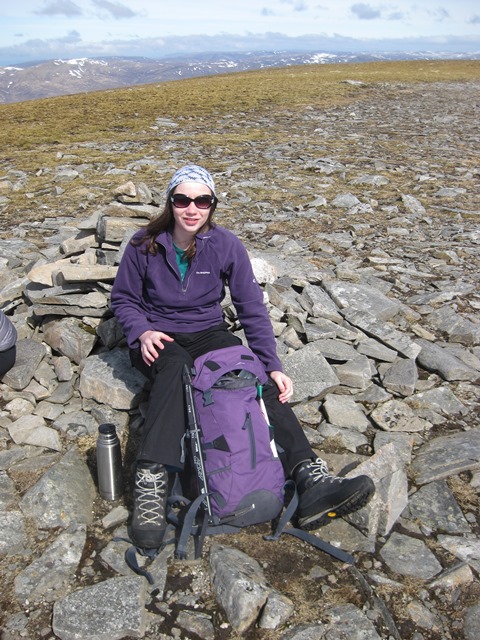 We decided at this point to detour and check out our planned route of descent before continuing on to the summit of Creag Meagaidh. After a quick look we decided the route was definitely steep but manageable keeping avalanche forecasts in mind! It was then back to the bealach and from there on to the path that leads up to the plateau of Creag Meagaidh. There was plenty of snow cover across the plateau all the way to the summit, surprisingly more than we’d seen in the Cairngorms the day before. We passed Mad Meg’s cairn, and continued single file in deep snow across the ridge to the summit cairn for our third and final summit of the day. The views were incredible with snow capped mountains visible in every direction. I just couldn’t take enough photos of the view. 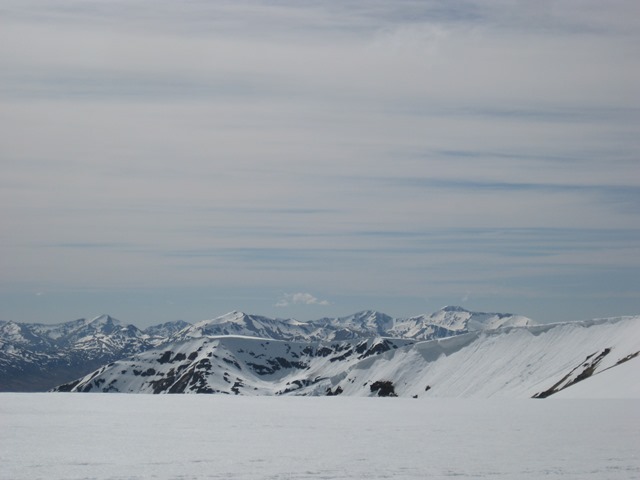 Eventually the return of cold winds and hunger got the better of us and we headed back down to ‘The Window’ where we stopped for a bit of a rest and more food. Before heading off on our descent we stopped to play in the snow hole complete with snow bunks and additional rooms (although the ceiling was melting in the afternoon sun!). I’m sure I remember reading the report about it on WH! As we set of through the Window we were joined by Geoff (hello Geoff!) who had ascended using this route and he kept us company for the rest of the walk. The initial descent from the window looked steep on all sides, we opted to keep to left and descend diagonally across to a patch of grass and stones before heading back onto the snow once the angle eased out a little. I’d stuck my waterproof trousers on before the descent and opted to go for my last bum slide of the season

, although the softness of the snow meant I didn’t get quite as good a run as I would have liked! But having made quicker progress than the others I managed to get some great shots of Laura, Vanessa and Geoff on the descent. Soon we reached the lochan and stopped briefly to admire the impressive scenery, taking in the massive cliffs of Creag Meagaidh. View back to the window Descent from the window Passing the lochan back on the path

It was an easy route from there along the path back to the car park. We passed the time talking about the hills we’ve climbed, the hills we want to climb next (other than just all of them which Geoff had already done!), and just generally wondering at the incredible day we’d had. Back at the car it was congratulations all round for another brilliant day

Later on I dropped Laura and Vanessa back in Aviemore, a little sad and a little jealous that I was missing out on another day in the hills to head back to the office. I woke up on Monday morning with a severe hill-walking hangover, dying to write my walk report just to live it all again.

Big thanks to Laura and Vanessa (and to Geoff!) for an incredible weekend – the mountains, the weather and the company were all top notch!

Great stuff enjoyed that, love the photo of the descent down the window - plenty of white stuff still lingering

Enjoyed this (in a very envious sort of way). The picture from the summit of Meagaidh is just fabulous.

Great report, your enthusiasm shines through.

Some amount of snow still left, and it aint long till winter

I think we all plan our next walk/adventure during breaks at work, keeps us sane

Thanks for a fantastic weekend, albeit tiring! This 2nd day was superb, it was the right decision to head to this area for better weather.
You were missed on our Bynack More ascent!

Thanks guys! Glad you enjoyed that one!

Cheers Nesa! It was a brilliant weekend! I was jealous of your pics in the office on Monday - think my feet were relieved tho! Can't wait for the next one