Five whole days in the lakes - after more than five months away I'd been counting down in proper childhood fashion, and almost burst with excitement on the Tuesday night. It was lovely to have the train journey down in daylight again, and the bus journey along between the Eastern and Northern hills in the last of the light.

Wednesday morning found me at Keswick bus station negotiating with the ticket seller - Could I go to the Thirlmere dam road end, please? Was that Dunmail Raise? No. Wythburn church? No. Park Brow? I didn't think so. King's Head? It would do! - I was eventually on my way, and actually got off the bus at Legburthwaite, where I'd come over the hill the last time I was down. I took the back road along to come out past the car park and over the main road to the dam road and new territory.

Past a farm and caravan park I came out onto the dam, which had a very fancy tower. Thirlmere itself, stretching away, was surprisingly beautiful - I'd been thinking of it as a very utilitarian kind of place, although being full enough that there are no grey edges does help. Raven Crag too was surprisingly impressive for so small a fell, towering overhead dramatically. In the tiny carpark at the other side a man was just parking a very old car. The signpost at the bottom of the path had fallen down, but it was obvious where to go, and a real uphill climb from the start.

Maybe it's been cleared out since Wainwright's day, or maybe I just like trees more than he did, but I didn't find the forest gloomy or oppressive at all - apart from the steepness, it was a very nice walk. The forest road provided landmarks by crossing the path and swinging back to cross it again higher up, and I stopped for an Easter egg break just above the second crossing. After that the climb seemed to go more quickly, and I came out at the clearing by the signpost sooner than I expected. The path towards the summit was a bit of a mess, all mud and leftover bits of tree. Beyond that it was a smaller path up through the trees again, and then the summit clearing, rock and earth and heather. Messy path to the summit

It's not quite as much on the cliff edge as the description seemed to suggest, and a slightly lower shelf has the dramatic view of the dam from above, and a gorgeous view right along Thirlmere, looking like a finger of sea loch. The dam from above Back at the junction I headed over towards the fort on Castle Crag. I was obviously in a contradictory mood as I wasn't disappointed by it - I suppose I had been warned, but it was also more obvious than the dun at Ronachan in Kintyre, which was my bench mark. 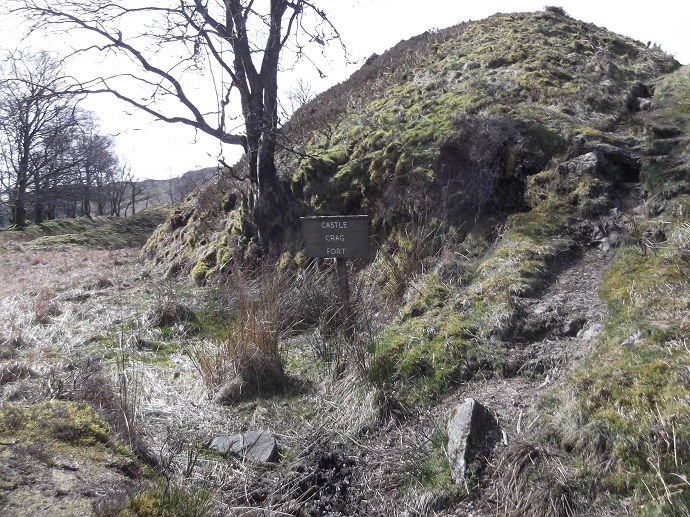 The edge of the slope down to Shoulthwaite Gill, with a waterfall tumbling down the slope opposite and a view out to the northern fells to the right, was a surprisingly idyllic spot, and I sat and dreamed and didn't want to leave. I moved on eventually, because time was getting on if I wanted to repeat the trip over High Rigg, and on balance I did.

I decided to take the forest road down round the back of the hill for a change - it was a longer way, but turned out to be a nice walk, and a gentler way down. A bridge over Shoulthwaite Gill towards the bottom provided the elusive link with the rest of the central ridge, but I don't think I'd have planned anything differently if I'd known - joining on Raven Crag to the trip up the north end of the ridge would only mean missing out Walla Crag instead. Down at ground level I took a path across the fields to the farm I'd passed early on, passing some out-of-place looking things - a goose standing happily in a field of sheep, and a Hunter's (of Edinburgh) bus parked at the roadside. Over the road, the climb onto Wren Crag was much as I remembered, except that a few trees seemed to have been blown about a bit over the winter. I was more prepared this time for the ups and downs of the ridge, and remembered to head to the left when I met the fence, avoiding the boggiest bit - as well as just generally taking things a bit easier and enjoying the views. High Rigg and the northern fells

The summit cairn had been decorated with a white flag for some reason. I didn't hang around, but just headed down - easier this time because the ground was drier. One reason for repeating the walk had been that I wanted to see inside the church, which I did, but because I'm daft I forgot to take a picture of its outside. I love the feel of little quiet churches - and the smell, which takes me straight back to childhood explorations. St John's in the Vale daffodils

I decided sadly to forsake Low Rigg for the chance of making it back to Keswick in time to catch the last boat, but after hurrying across the fields and up the road to the hostel I didn't quite have time left to hurry down to the pier - and anyway I was tired of hurrying! I was surprised just how tired I was, because I'd been thinking of this as an easy first day - setting out to walk 6 miles down to Borrowdale was hard work. I've never come closer to breaking The Rules (which say that I can use as much public transport as I like to the start of a Wainwright adventure and away from it, but everything in between should be done on foot - with a sneaky exception for boats which are an adventure in their own right!) In better circumstances, it was an interesting walk. The first mile or so was just plain road, although enlivened by a sign with a large exclamation mark warning me of badgers, then the next section was lakeside path, with another odd sign at the junction promising beds and cups of tea in 1 mile and cups of tea and beds (in that order) in 3 miles. I'd never been west of the central ridge before, so Catbells over the water and the higher hills looming ahead were all something new.

The end of the lake had a very tempting looking new bridge, and the old bridge at Grange was more than halfway, as well as marking the change to a much narrower valley. The Bowder stone had people doing actual bouldering on it, with mats, which was quite exciting, but I didn't stop to climb the stairs. And then just keeping going slowly, until I finally reached the bridge before Rosthwaite and the beginning of the end, and a last slow mile. And then I had to walk back to Rosthwaite for dinner, but that was a bit easier without the bag - and I did feel better afterwards! One day in, but it was possibly going to get harder before it got easier...


Raven Crag.gpx Open full screen  NB: Walkhighlands is not responsible for the accuracy of gpx files in users posts