our_route.gpx Open full screen  NB: Walkhighlands is not responsible for the accuracy of gpx files in users posts
On wednesday I set off to Glen Feshie to do the two Munros from Auchlean and as usual I forgot an item, though I had taken my camera I forgot to put in the recharged batteries, hence I used my mobile though the quality is poor.

I set off from the car park about 10am after a 2hour 45 minute drive from the Glasgow area and though the weather forecast was to improve as the day progressed the opposite happened until about 3.30pm when the sun came out and made for the last 30 minutes a nice stroll along the east bank of the River Feshie. 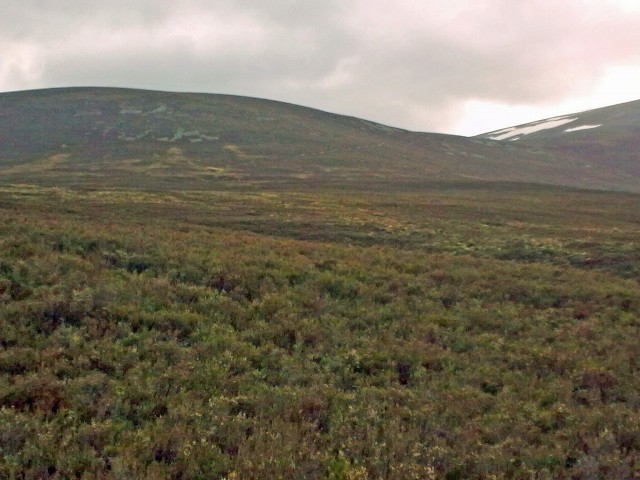 I picked up the path from the farm to Carn Ban Mor which is a steady ascent and after walking in Knoydart 10 days ago it felt like a walk in the park. Up on the plateau there was a strong wind and from Carn Ban Mor headed north towards the summit of Sgor Gaoith which was fairly straight forward as the dark grey clouds were above the summits though the strong wind made it feel very cold and had to put on gloves hat and jacket. 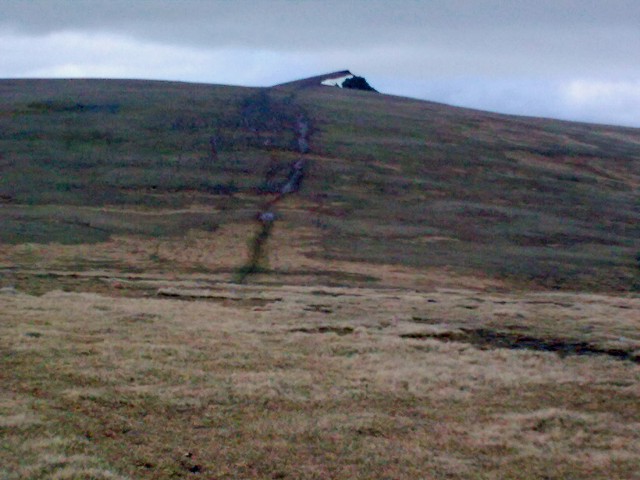 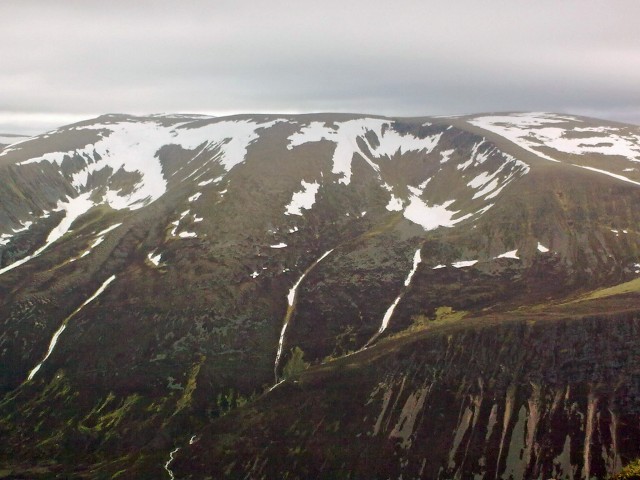 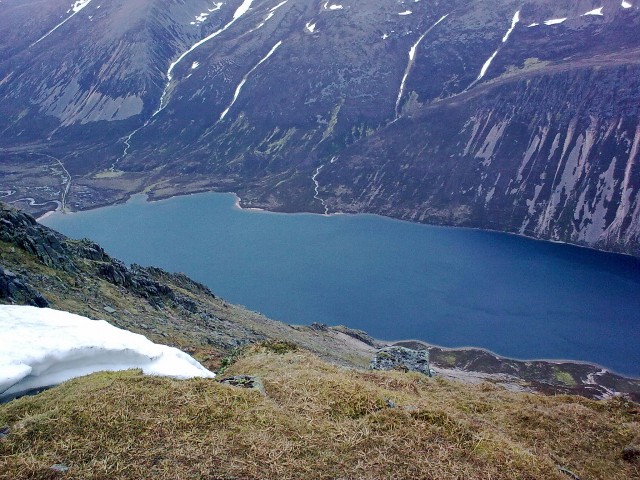 After trying to take a few photos in the strong wind coming from the south west I did not stand to near the edge of the cliffs as it looked along way down to Loch Einich.

I set off south back to Carn Ban Mor as there is a walled shelter and had lunch before setting off to Mullach Clach a' Bhlair which was a steady walk over the plateau passing Meall Dubhag on my right which was once a munro then Coire Garbhlach which had patches of snow on it. Picked up the track then a path which took me to the summit and had good views of Cairn Toul and Sgor an Lochain Uaine. 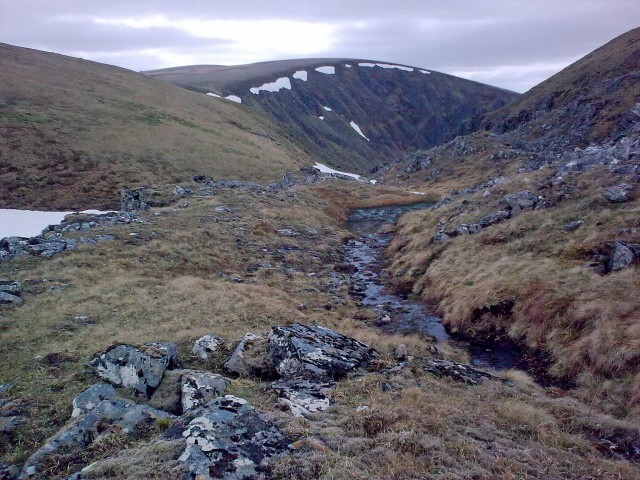 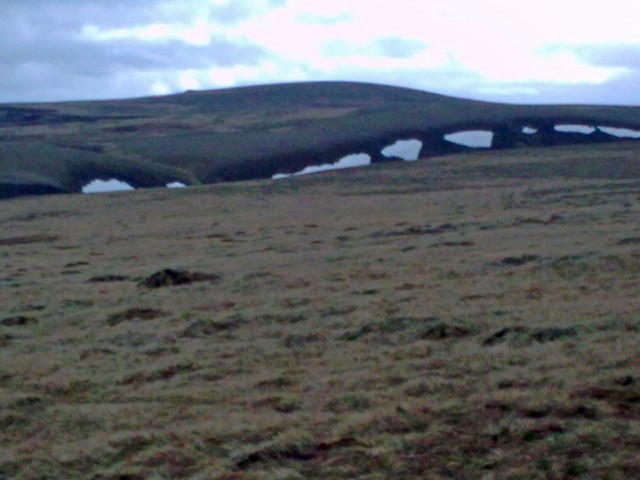 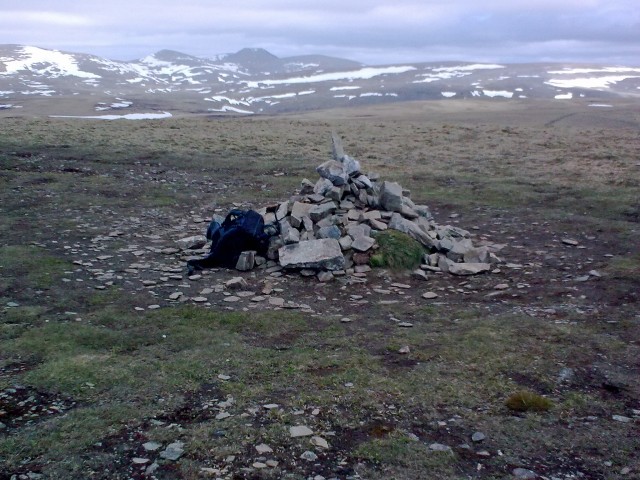 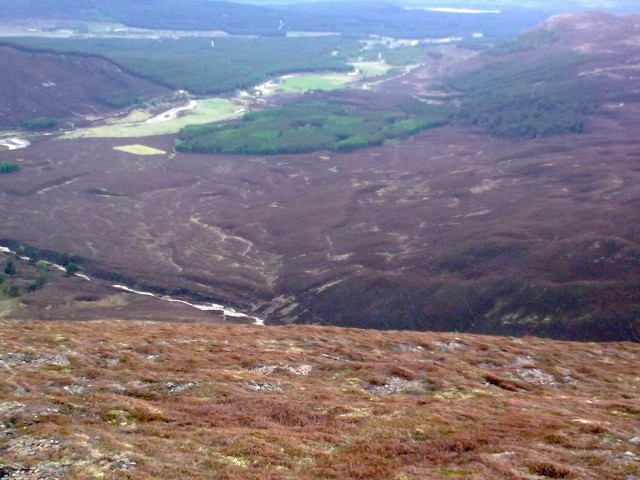 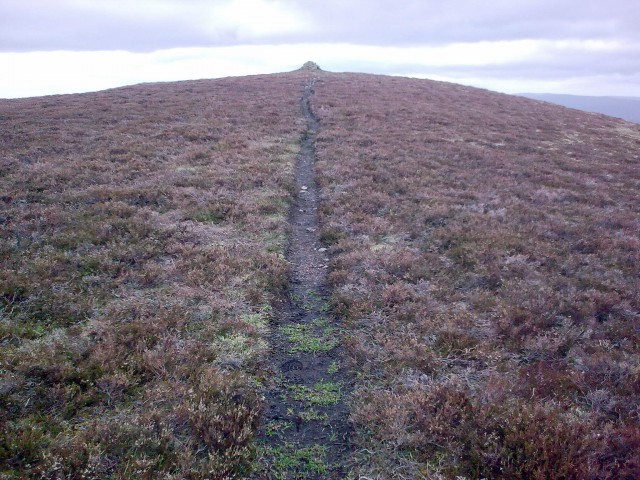 My route back was north towards Coire Garbhlach to pick up a track that would take me west down into Glen Feshie then north to the car park at Auchlean. I changed my mind at the last moment on reaching the track, I followed it for a short distance west then walked up to the summit of Meall nan Sleac at 800m, then descended north west down into Glen Feshie picking up the path at a bridge keeping to the east side of the river then shortly arriving back at the car park. By taking the short cut I reckon I took about 3 or 4km off my original walk.

A good day and surprised the SMC book has them as single walks as both can be done comfortably in a day outing. \sorry the pics are not good quality and will in future double check that batteries are in the camera.

Liked this report Les...like to know when you can shorten routes (call them escape routes) for when the weather is pants.

Definitely one of my favourite walking areas! Love that last photo with the straaaaiiiight path to the cairn!

Hi Les,
Nice report. It looks pretty flat up top. Perfect for running between the summits. (once my knee is better)

Your walk out over Meall nan Sleac saves about 2km so its useful to know.

Thinking of doing this walk soon, so thanks!

nice report,i walked this today in the driving rain,howling wind,low level cloud and hailstones! and i absolutely loved it! shame i misssed the views :0(

i thought about your shortcut but stayed on the track and i was rewarded by getting to walk along the river in the stunning (if not soaking) scenery,its such a nice area it goes through although my walk ended up being 28km!

just like your day i had some sunshine for the last 30 mins of the walk as per usual! lol

LOOKED AT THE ROUTES FROM "WALKHIGHLAND", BOTH MUNRO'S ARE LISTED AS SEPARATE DAYS OUT, TAKING IN 2 DAYS TRAVELLING FROM STIRLING AND RETURN. (TOTAL TIME TRAVEL 10 HOURS, DISTANCE 456 MILES)
I DOWNLOADED THE GPS ROUTE FROM "LES STUART, 02/06/2010), THIS I FOLLOWED AND DID BOTH MUNRO'S IN JUST OVER 7 HOURS.
MANY THANKS TO LES FOR A PRETTY STRAIGHT FORWARD ROUTE TO INCLUDE BOTH MUNRO'S IN ONE DAY.