Thought the time was coming near when I ought to try and tackle the Killin 3 and maybe get some scrambling practice, snow work while I was at it, though I knew that might all depend on one hill - An Stuc! I managed to hook up with fellow WH'er, Karen, who was likewise game to see how far conditions would allow us to go.

After quick introductions at our rendezvous point, I was soon loaded up and on our way to the Ben Lawers hotel, to see if we would get parked ok, as there have been groundworks going on, affecting the amount of car parking available. Once the poor guy inside had let us in, or himself out, we were asked for a fiver for the privelege, which we coughed up, perhaps with mixed views, but better that than being told to move on? 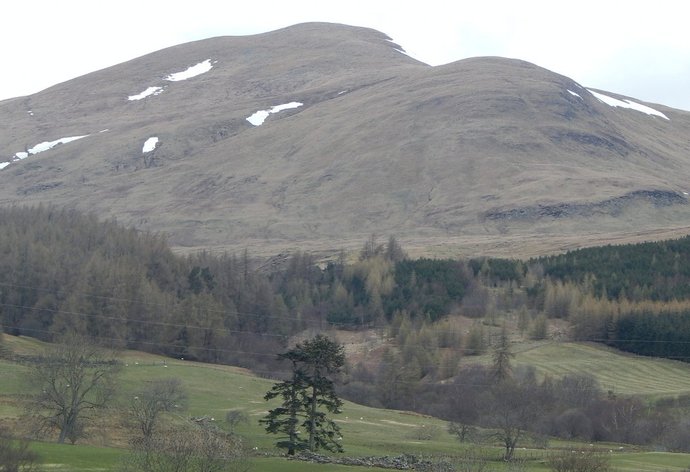 Meall Greigh from the road. 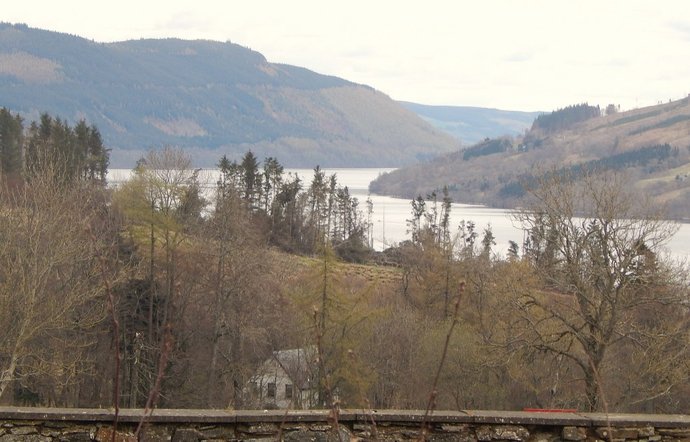 We followed the route described on here, so heading up the farm road, past the horn carver's workshop, then into the woods, which is conveniently sign posted. A couple of high hurdles over styles and we were out onto the open ground, with a clear view of our first destination, Meall Greigh. The path is a wee bit open to 'interpretation,' as it begins to ascend up Sron Mhor, but in these conditions, even I wasn't going to get lost?? 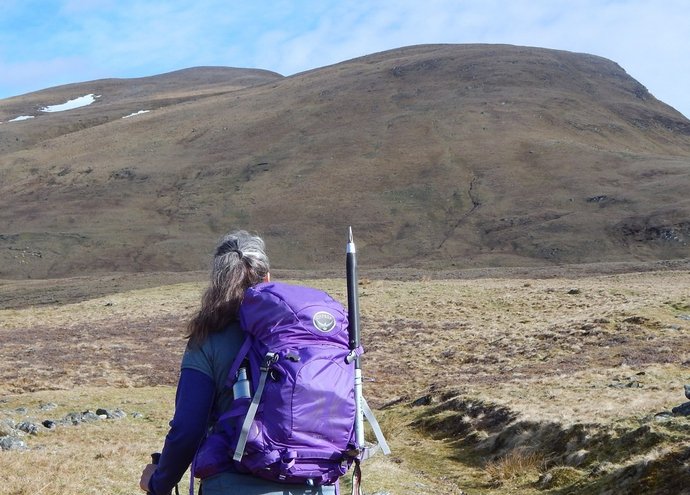 Contemplating the way up Meall Greigh. Unusual cloud formation over An Stuc ... or, an omen? 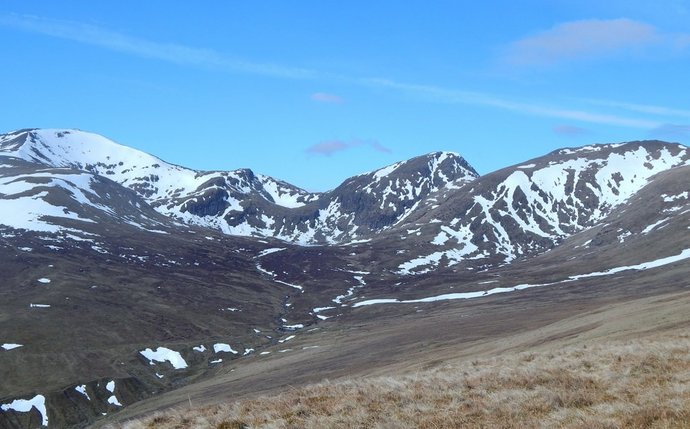 Some of the days hills.

Fairly low down, we got our first look at An Stuc, which first raised a wee query in my head, as there looked to be a fair amount of snow, round its upper reaches. Mmmh, I wondered. Anyway, there were also some fine views towards Ben Lawers, Lochan nan Cat and back to Loch Tay, as well as a few others following us up, to distract negative thoughts and I'm sure poor Karen, was more than distracted by my endless nattering away! Before we knew it, we were at the summit, in just over 2 and a quarter hours, as a solo walker, joined us for a quick chat. 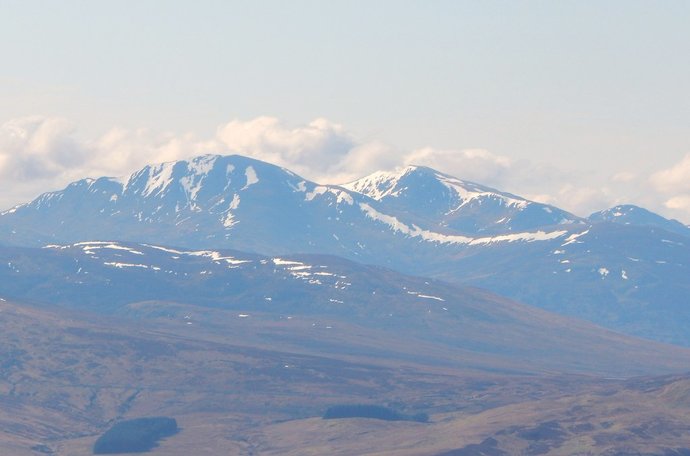 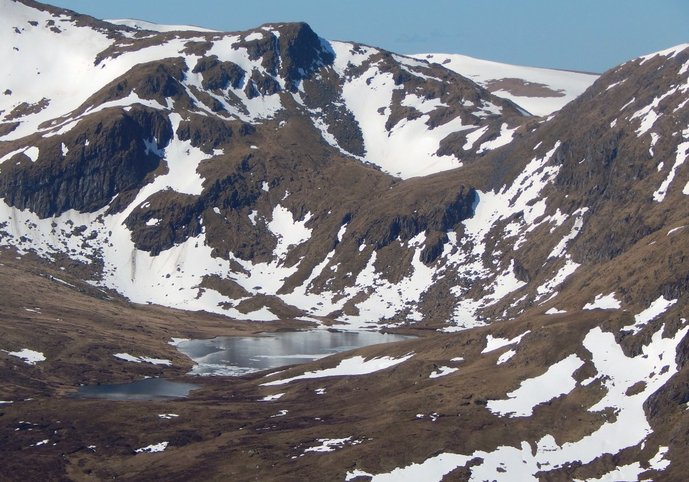 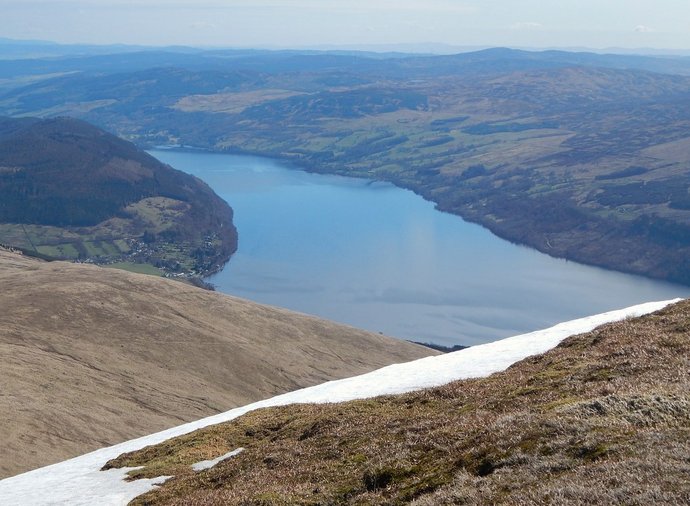 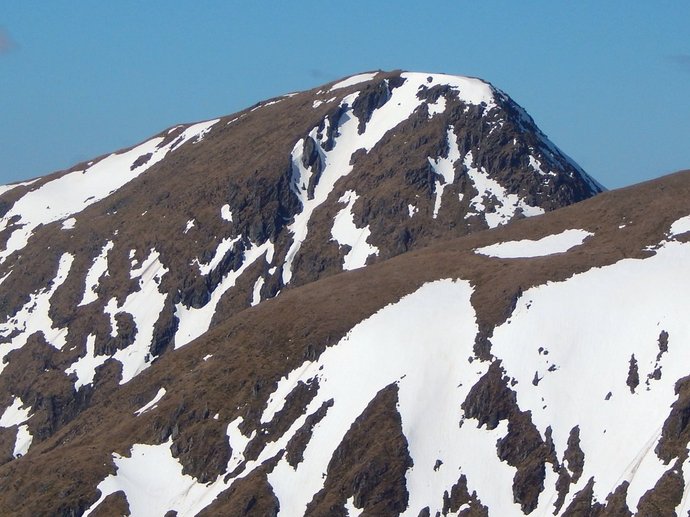 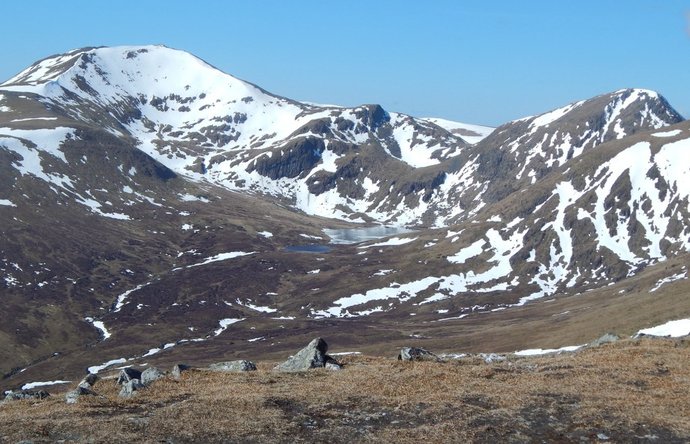 The trek over to the second munro, Meall Garbh, is likewise, relatively benign, aside from us having to cross a few snowfields and pick out various tops coming into view. I think Karen was quietly impressed with my ability to guess at them, whether rightly, or wrongly. (I think I was mostly correct, Karen!) As described there is a bit of a false top here, before quickly moving on to the small cairn marking the true summit and where it really hits home, one is up real hills here and not out for a wee jolly! Took us a further hour and a quarter to here, giving us superb views of the mountains to the north. Unfortunately, my pics of Ben Nevis and Glencoe hills never worked out, but fate was to ensure I'll be back for another view. 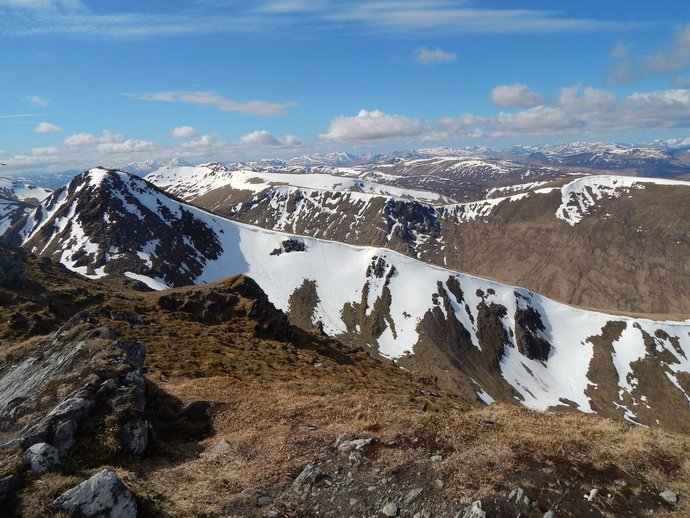 An Stuc and corniced north ridge. 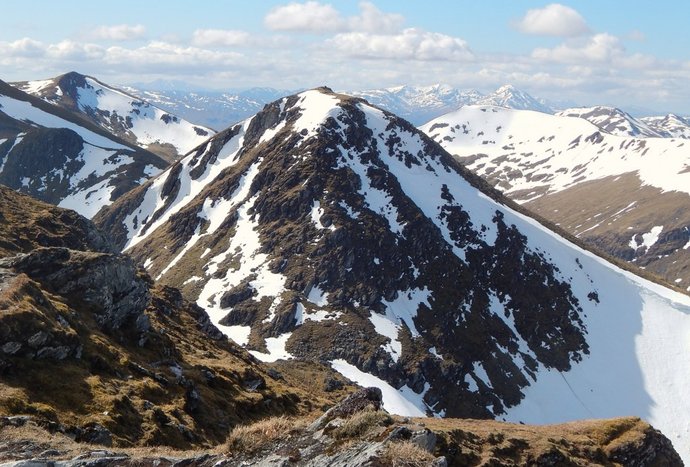 AS looking tasty, or nasty? With Meall Corranaich and Beinn Ghlas behind. 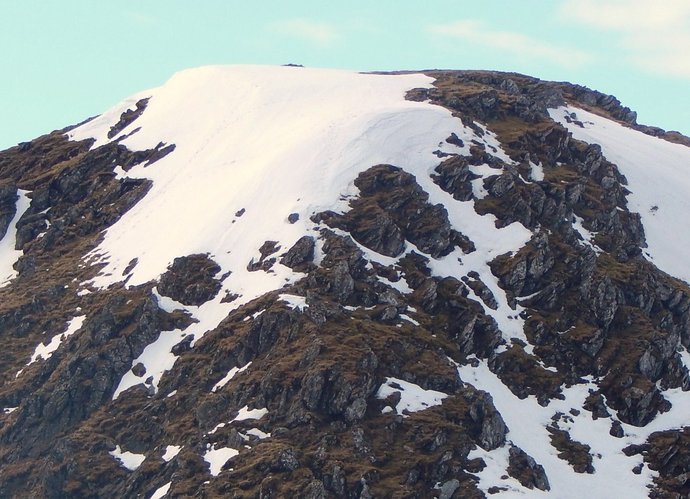 Some of the snow around the top. One can just about make out footsteps kicked in, to the left of the main patch. 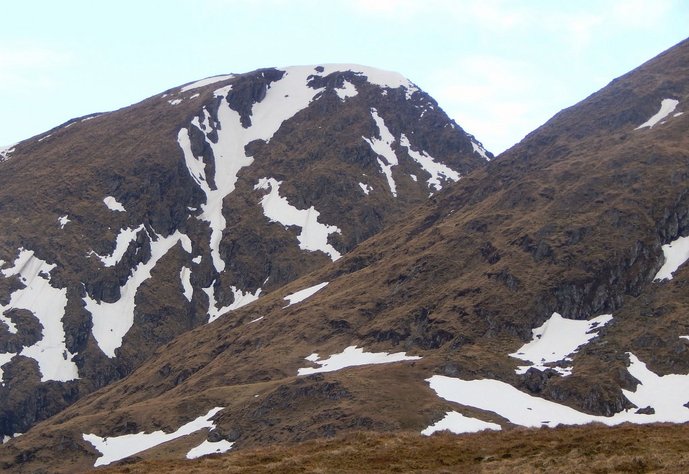 An Stuc from the south.

It doesn't take long dropping down from Meall Garbh, to the bottom of An Stuc, but watch your step, as your eyes will most likely be drawn upwards to the imposing eastern face, staring back at you. Mine certainly were, as the ring of snow around the summit and up various routes, began to pose questions. Serious questions. The solo chap, had already found his answer and was getting ready to go back from whence he had came. A following pair, soon caught up and had their doubts and debates, so it was only right, Karen and I do likewise. 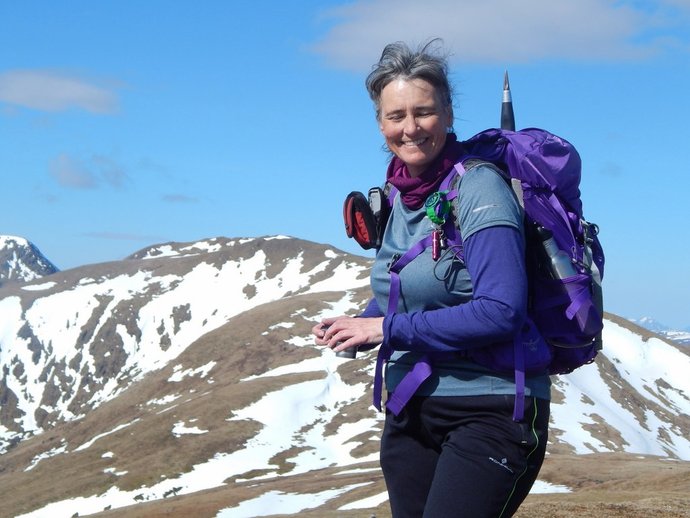 Karen and 'the purple rucksack.'

Karen was none too sure. I was thinking we could probably make the climb over the summit snow, but was in doubt about a steep looking patch ahead. What if we got up that patch, but then had to come down it? As well as that, the descent from An Stuc, down to Lochan na Cat had looked pretty dicy, from a distance and more to the point, I wasn't going to be the bold warrior to press ahead, when the majority had already voted with their feet. Time to turn back and save this one for another day/way! 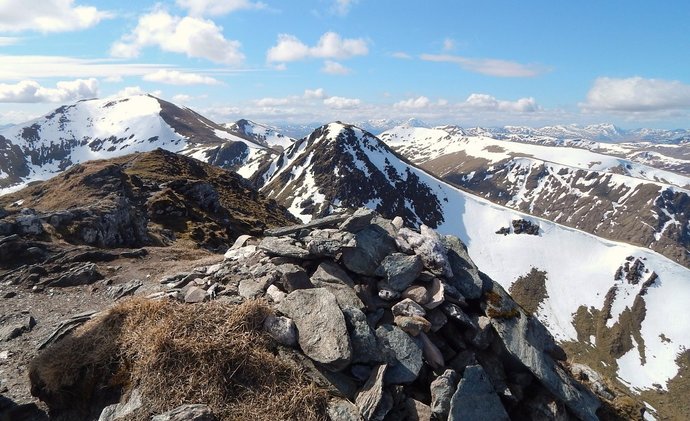 An Stuc, with Ben Lawers out to left.

Didn't take us long to climb back over and down to around Lairig Innein, where we then turned south and headed directly down to the dam, onto the return route out and back to the hotel, taking 6 and three quarter hours all in. A good days hike, in anyone's book, especially having some good company along for the fun and help think things through, when I might have otherwise been my impulsive self, tempted beyond my ability. 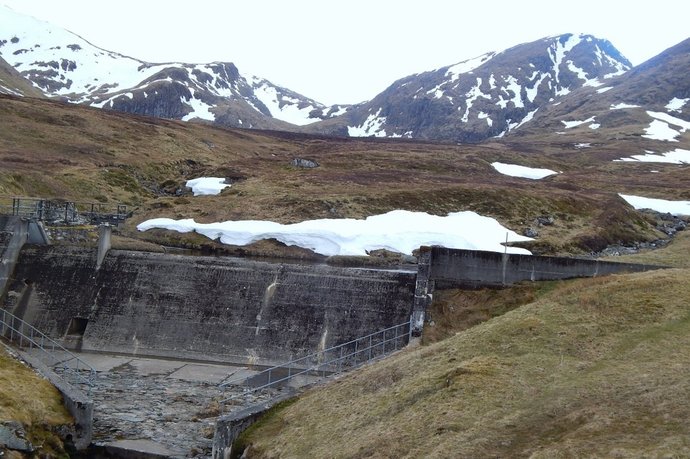 Down at the dam, with a rueful look back to AS.

As for the walk title, Karen came up with the words/lyrics "two out of three ain't bad." I'm sure it would have been one of her favourites in previous years and mine too, but I resisted the temptation to give her my Meat Loaf karaoke act. On reflection, good as the hook line was, in our circumstances, I couldn't resist another old classic, by Lionel himself, "An Stuc on You...." I'll save that one for when we go back for An Stuc, Karen! 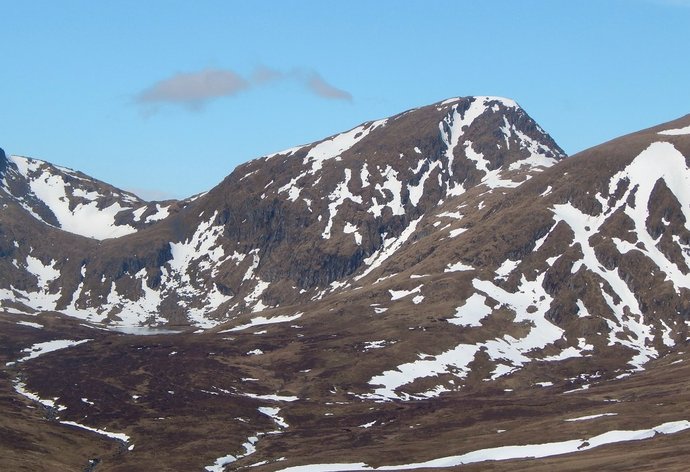 An Stuc and Coire nan Cat. 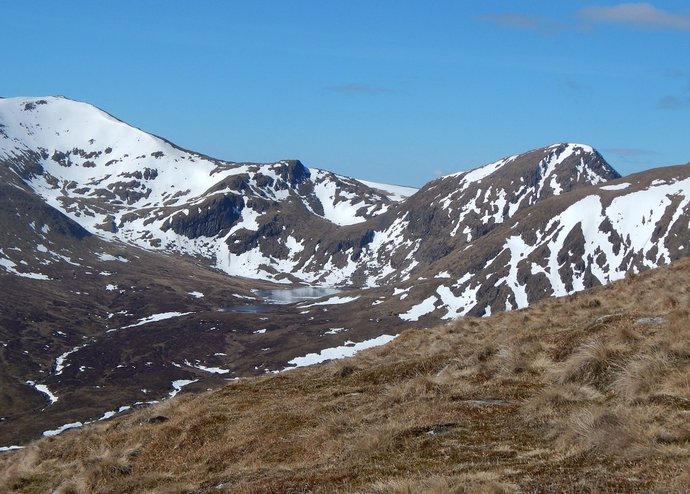 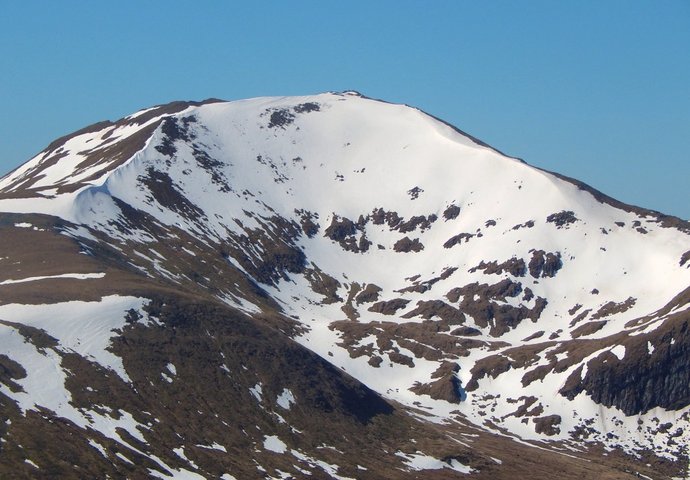 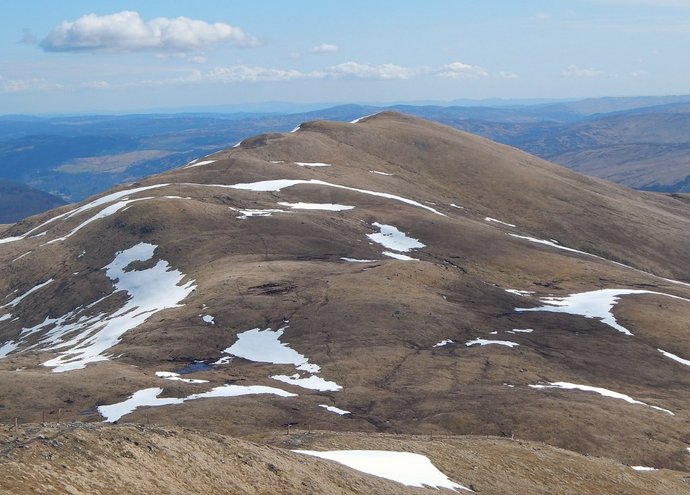 Looking back to Meall Greigh. 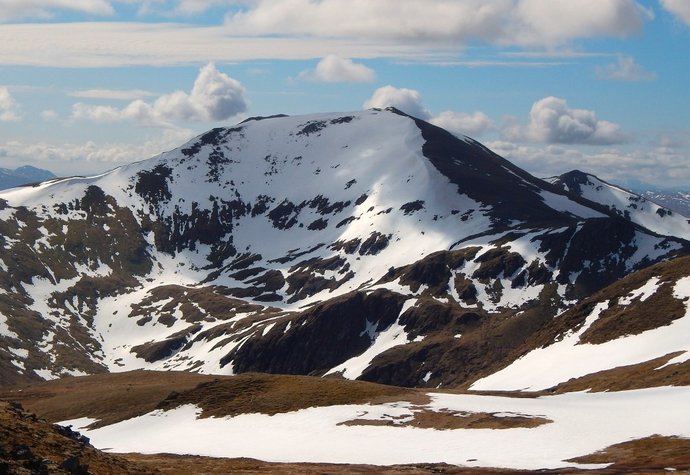 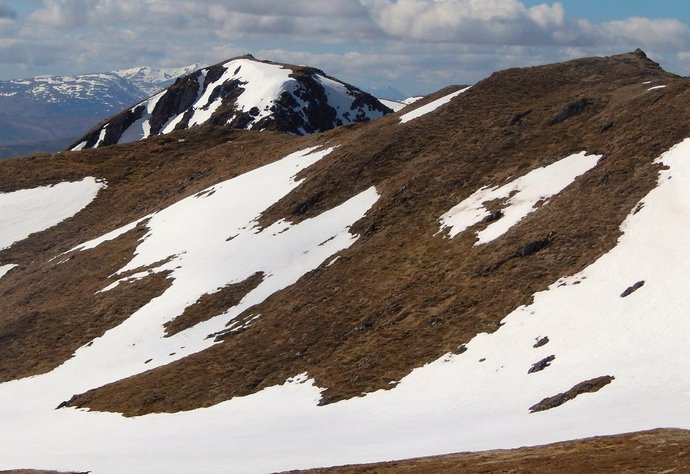 AS behind Meall Garbh. 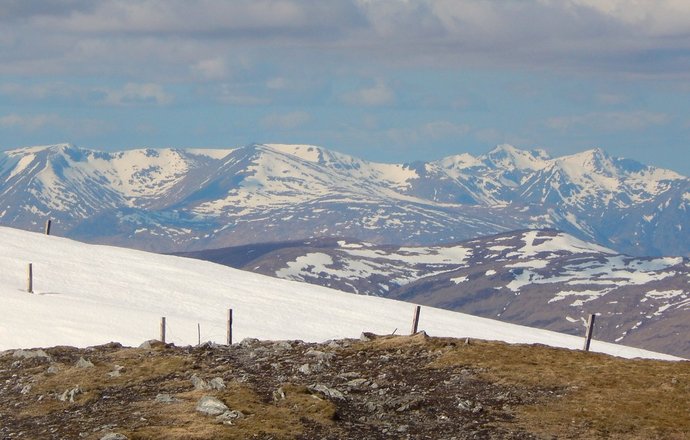 Hills to north, but lost my bearings. Any ideas? 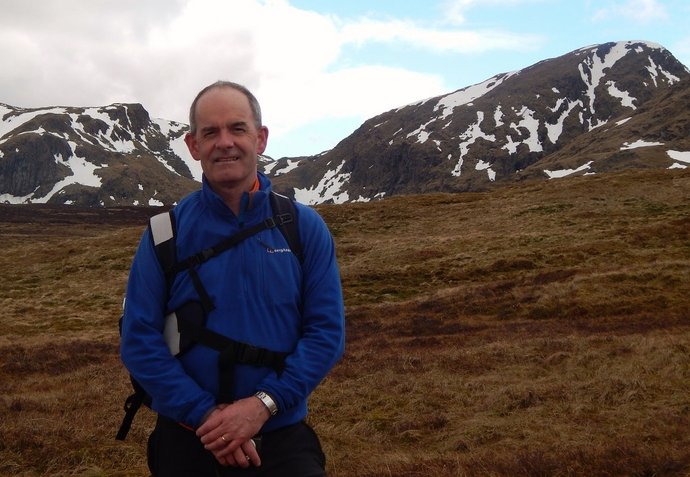 Nice pics, looked a great day. I'm sure you'll make it up An Stuc some day.

Nice one Jimmy, some great pics

Am out that way next week for Tomsie's compleation on Lawers, may just nip across for old times sake

Thank you chaps. Can't go wrong for photo's on days like these, eh. I'll make it back to An Stuc for sure. I did see Tomsie's invite, but I'm wedding it, that day. Maybe it would count if I gave you a flag with my name to plant on An Stuc, Martin?

JimboJim wrote:Maybe it would count if I gave you a flag with my name to plant on An Stuc, Martin?

It most certainly would not count! For starters, if you did that, who else would there be to go back and pick up the lone An Stuc with me at a later date? That is, besides the other three chaps who also turned back and who might also have the dubious distinction of having yet to conquer only that one hill in the middle of the Ben Lawers 5!

Nice report, Jimmy, and some really good photos. Thanks for the entertaining company during a great day out. Off to listen to my Bat out of Hell LP on the record player.

JimboJim wrote:
Maybe it would count if I gave you a flag with my name to plant on An Stuc, Martin?

It most certainly would not count! For starters, if you did that, who else would there be to go back and pick up the lone An Stuc with me at a later date? That is, besides the other three chaps who also turned back and who might also have the dubious distinction of having yet to conquer only that one hill in the middle of the Ben Lawers 5!

Nice report, Jimmy, and some really good photos. Thanks for the entertaining company during a great day out. Off to listen to my Bat out of Hell LP on the record player.

Thanks, Karen. Maybe we could ask him to take a flag with both our names then? Ok, no cheating and maybe we'll manage another try at it when conditions better. Would be funny if we met up with the other three guys, too. They could listen to a great, double act duet, by Meat Loaf? On second thoughts, I wouldn't want to be responsible for anyone jumping off the top.

(Got your photo's, thanks. A couple more reminders of a fine day. Also, checked phonetics for 'bealach.' Pronounce bjaLəx. Easy!)