Quite a straight forward walk this one and the kind of one suitable for a thumping hangover as its not too hard going.
Arrived at the car park and easily found myself a space at 0900hrs. "Shes looking as described in the brochure" I said to myself. So up the well constructed new path and through a couple of gates I went. I decided to take the clockwise route around and folled the path. On may way up looking back I got good views south east around Loch Lurgainn. Once on the plateau I could see most of Cul Mor to the east with the usual topping of cloud. Soon after a more level path there is a sharp increase where the clockwise and anti-clockwise paths meet and this takes you up to the cairn. Looking over my shoulder north was Loch Sionascaig in front of Suliven. 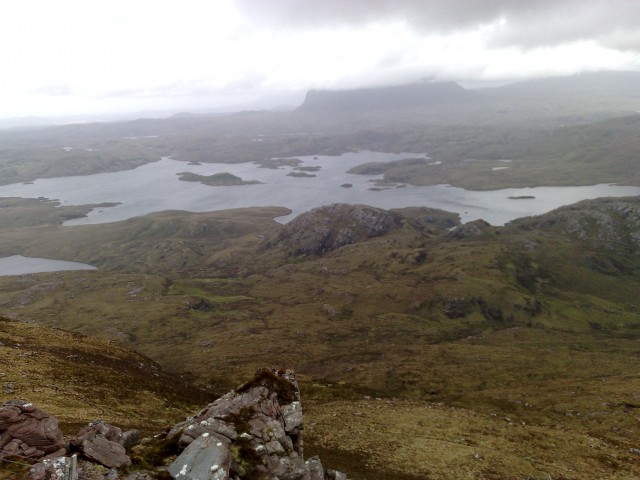 The cairn was reached in an hour and I felt at least 4 pints of last nights cider was exorcised! The wind was gusting a bit but hey you only live once, so I scrambled and clambered up the western side of Stac Polly. As I got a strong signal at the summit but pretty much nowhere near the car so I phoned a couple of folk and checked my emails up there! (what has happened to this world) haha!
I was aware of the popularity of this hill, but the scale no. I passed around 40 people on the descent round the eastern side and back to the car park. Evidence of this popularity is shown here at 1100hrs when its gridlocked! 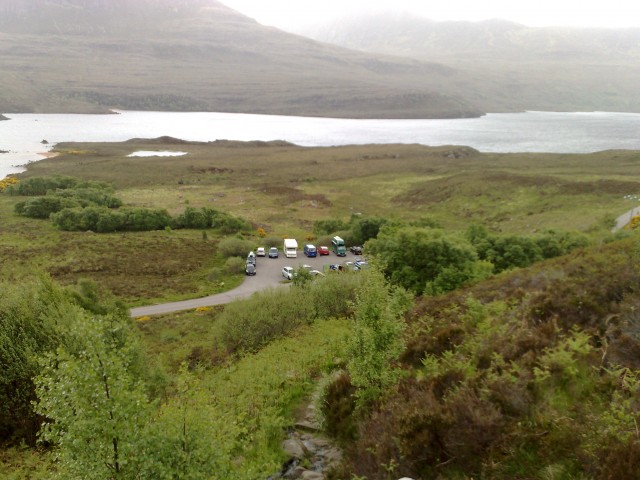 Here endeth my report on whats a hill well worth doing if in the area.

Excellent sid. I've had this one in my sights for a while. Did the scramble up to the western summit seem easy enough?

Cheers Scott, I found it quite difficult really! Needed to gee myself up a bit with my hangover still in place. Only wish it was a bit clearer on the day, I will do it again next time I'm in Assynt. Gonna get up for some fine looking Corbetts real soon.

Sounds like you did well though, many don't bother with the true summit. There was a discussion on it a while back: http://www.walkhighlands.co.uk/Forum/viewtopic.php?f=1&t=2240

Well from your photos, it at least looks like I can make it to the col!

sid0995 wrote:Quite a straight forward walk this one and the kind of one suitable for a thumping hangover

Is this just a casual observation, as in if one happened to have a "thumping hangover" or are you actually speaking from bitter first hand experience after the cider?

Thats the very hangover Greame, switched back to vodka at the weekend but I have to face facts. ANYTHING after a serious bevvy now is difficult.