route686929818.gpx Open full screen  NB: Walkhighlands is not responsible for the accuracy of gpx files in users posts

At last the white stuff was receeding and it was time for my much delayed return to Munro bagging. Mount Keen had been the plan for Sunday 12th April however thanks to the return of winter that weekend it had to be delayed. Don't get me wrong I like snow, I just prefer being towed up it and sliding down it on my snowboard than walking in it (yes I can hear you all boo hissing me just now.......)

Anyway with a rare opportunity of a day off and good weather I picked up my mate Brian from work and headed up the A90 towards Brechin. Turned off onto the B966 then took the minor road signed for Glen Esk all the way to Invermark where the car was abandoned and the walking began. Hard to miss the start!

In fact we commented on how you would need to try really hard to get lost on this route. It's a Land Rover track for most of the way. Worth noting hat the cottage you pass just after this sign does take away home baking and sandwiches so no disaster if you forget supplies. Thankfully all the sheep were in pens in the Glen, I presume due to lambing, so Mountain Mutt was able to get off leash (my Border Collie, not Brian....) and run about burning off his cabin fever whilst we walked along. The walk in was fairly flat and gentle following the river and before long it opened out I saw the Queens Fountain along with the random cottage in the middle of the Glen. 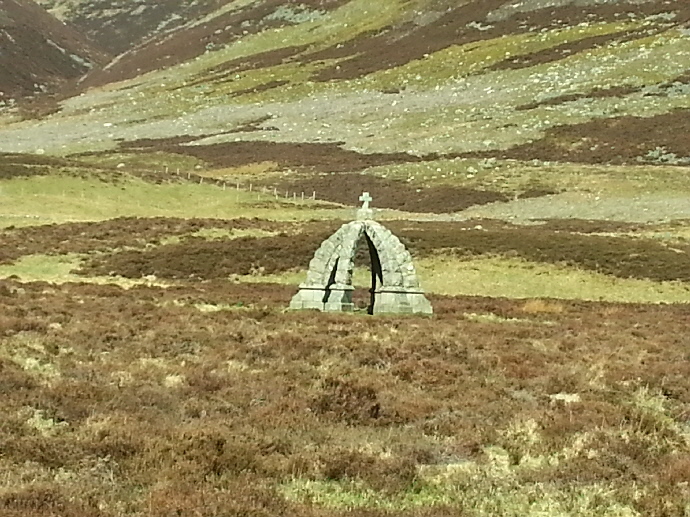 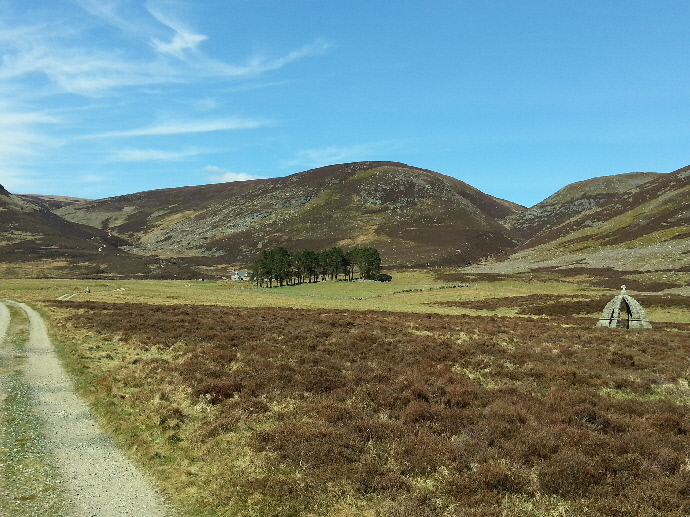 View down Glen Esk towards the climb up

You can see the Land Rover track is quite a scar on the landscape and extremely easy to follow. It was a glorious day and I think if I come back to this hill i will try to time it for the heather being in bloom. It is everywhere around you and I think in the right season it would be spectacular here. In April it's a bit brown and bland but this was the day to get my mountain legs working again, hence the reason I'd picked one of the "easier" Munros (not a fan of that phrase as easiness is very much dependent on so many factors)

Once I reached the cottage the path crossed a stream before it headed into a narrower valley for the climb up to the plateau. Mountain Mutt was feeling the heat a bit but the eejit that he is he likes to stand in the water and just stare at me waiting for me to throw something in. For me to cool him down and take a drink i have to scoop the water and throw it at him, which he then attempts to grab out of the air. Who said Collies were intelligent????? 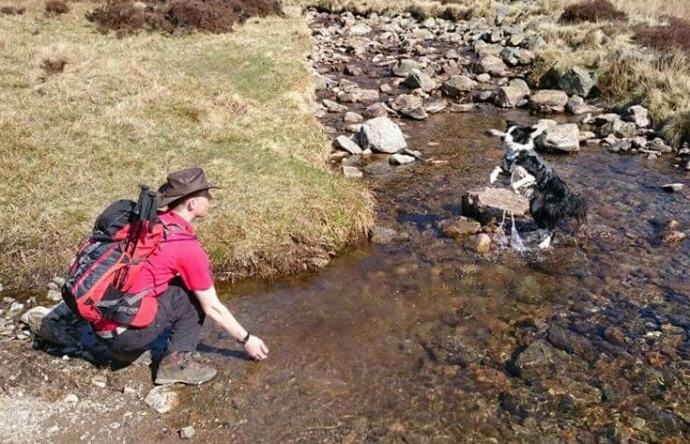 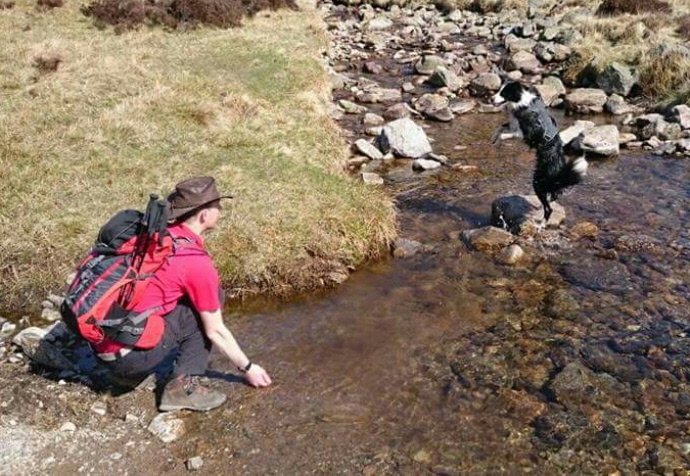 The steepness of the path increases quickly from here although it's nothing too serious. A fit mountain biker could probably cycle up this. The only thing was it is so deep and narrow here the wind was completely cut out so I was starting to bake in the sun. Felt like mid summer than April. When I came to a hairpin bend in the track I got my first view of the summit of Mount Keen. Mountain Mutt on the path as it starts to climb 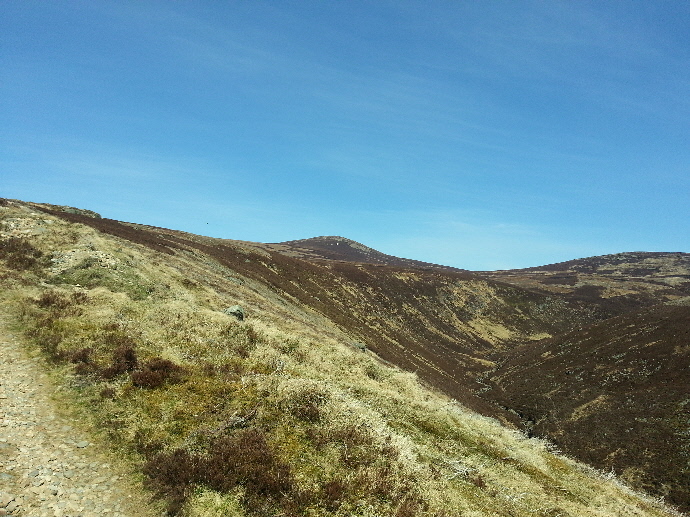 First summit view on the way up

Once I negotiated the hairpin bend I came out onto the plateau. There is a junction of paths here and I took the right hand path towards the obvious highest summit. Now the views started to appear and Lochnagar looked superb over to the left. I was glad I had chosen an easterly and smaller Munro cause there was still a fair amount of snow on the big ones. 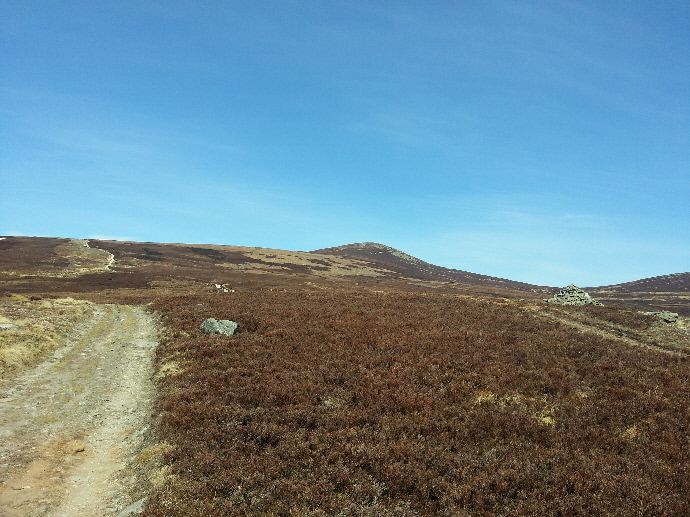 View to the summit once the plateau is reached

The path is again easy to follow all the way to the summit although be aware of the two false summits that were pretty annoying! The final bit to the cairn is a bit rocky and the cairn itself is built upon a huge pile of rocks. The cynical amongst us would say that was purposely built to gain Munro status 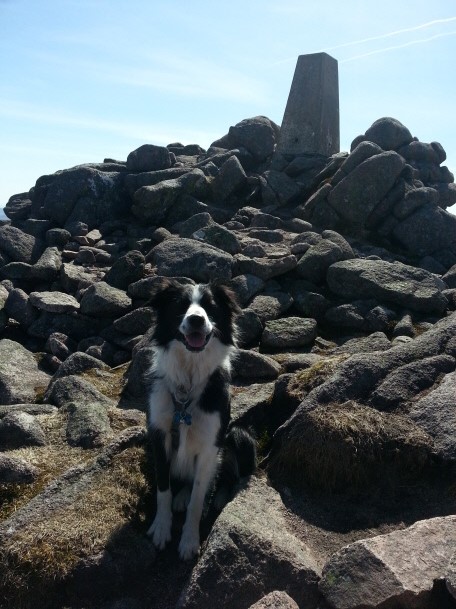 Bauer looking chuffed at the summit 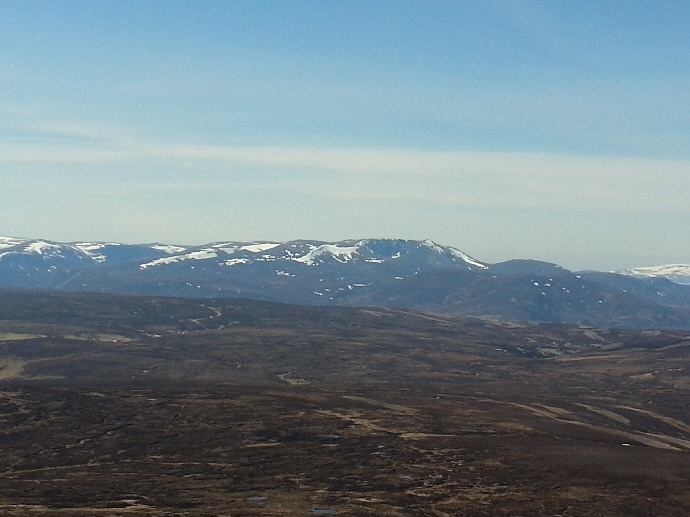 There is plenty of shelter at the summit but on a good day like I had i just sunbathed on the rocks whilst having my lunch. Heading back it is just a case of retracing your steps which I find quite dull. We didn't hang about but still got a nice view into Glen Esk. 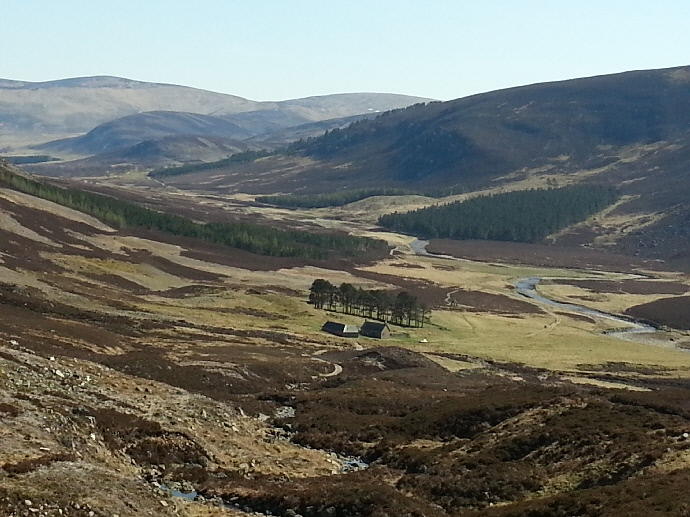 Glen Esk from above

Brian and I were so so stuck in conversation that we missed two things on the way down. The first was three sheep that had appeared just at the cottage so Mountain Mutt unfortunately had a wee play with them. Luckily once again his intelligence fails him and once he gets close he doesn't know what to do and just comes trotting back. Secondly the sky had decided to put on a pretty cool display with what little cloud there was. We would've missed it completely if it hadn't have been for the fellow walker who shouted at us to look at the sky. 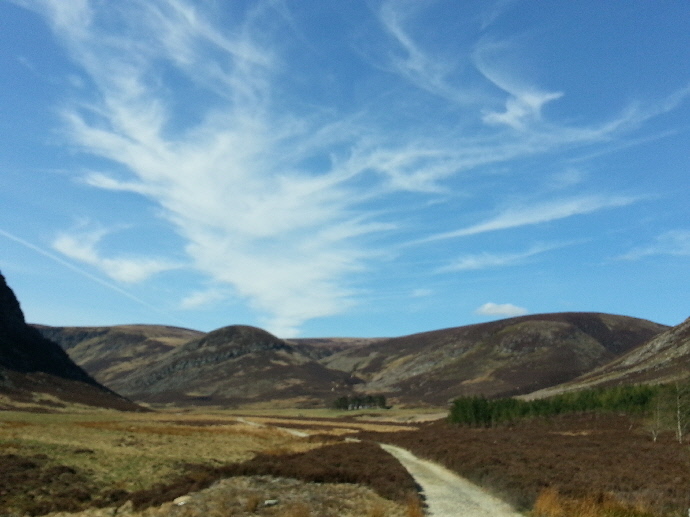 He also showed us a picture of an Adder he'd seen crossing the path! Luckily I didn't see any of them and returned to the car in about 4 1/2 hours including the lunch stop at the top. 105 down and many more planned for 2015.