Bike chain repaired, I headed off to Loch Turret. I wasn't sure how far up the track I could go, but was pleasantly surprised to get all the way up to the dam and park up in a spacious car park. As I was setting off I met a couple of ladies who were also heading up the same hill. Wasn't sure if there was a path from the dam to the lochside track, but on exploration found an unlocked gate - 2nd bonus ! Biked alongside the loch in more beautiful weather, putting up a pair of Mallard. At the bottom of the hill track, there was a metal animal feeder which made a convenient place to padlock my bike to. It was easy going up the track and although the map shows the track contouring below the summit, a second track breaks off to the left to end in an unloading area from which a quad track heads up to within 50m of the summit, eventually meeting the track coming up from Achnafree in Glenalmond. ( I'd though about coming up the track the previous day buy my feet were too sair & the bike chain breakage was a convenient excuse to abandon these thoughts ).
I basked on the top in the balmy conditions "taking lunch" , leaving a part of a soggy banana sanny for the ravens and snapping off a few pics before heading off down. Unusually, there was no mobile signal and my summit text didn't reach the folks at home until much later.

I expected to meet the ladies I'd met in the dam car park on the way down, but there was no sign of them. They'd obviously taken the haute route from the dam on a track which contours the high on the NE side of the loch.

The descent to the bike was only broken by the croaking of ravens , patrolling for any leftovers from the lambing.
As I sat by my bike having a second piece, a guy walked past on his way to Ben Chonzie just wearing shorts & boots. He was already beginning to redden up, so I hope he put his shirt on before he got "lobstered" ! 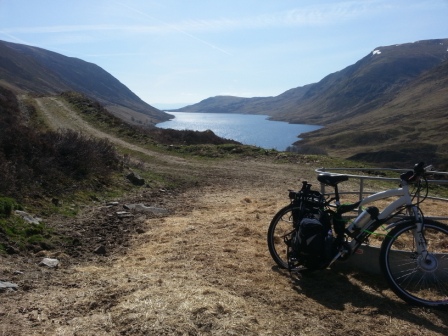 Heading back along the lochside, I was negotiating a burn crossing when my bike chain broke while trying to change gear. The gods must have been smiling on me, as there was enough puff in the batteries to get me home without having to push !
Soon after the breakage I met a birdwatcher with good binoculars & as we chatted a big bird flew across the loch and landed close to where we were standing. A quick scope through the binos brought the pronouncement - "greylag goose". Shortly it was joined by its mate. He queried me about Ouzels, but I hadn't seen any. When I mention seeing a peacock butterfly he said - "och aye there's lots of them around here". I was totally deflated as I thought I made a new sighting. ( I'd never seen any before ). With the recent good weather, it seemed like everything was bursting out in full bloom. Another freewheel back to the car with the sun still shining, to search out the bike mechanic at Comrie croft ! 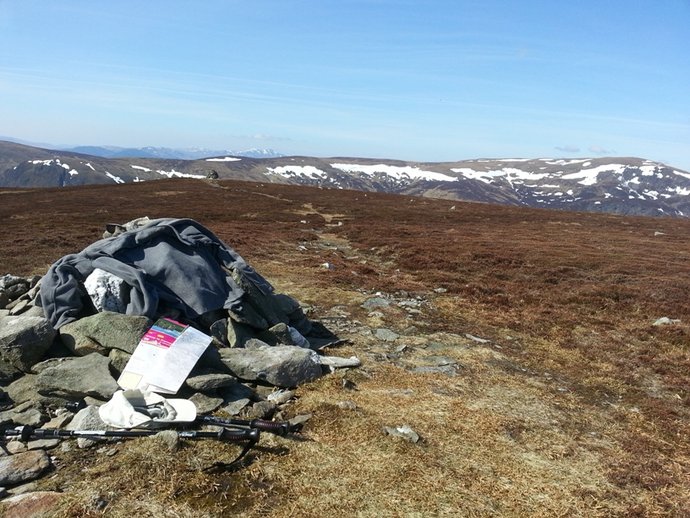