With a few days to spare as we took our youngest son back to Dundee after his Easter vacation, this gave us a good opportunity to go and visit a part of Scotland that we were completely unfamiliar with - Glen Clova. This also gave a good opportunity to do some 'training' for the forthcoming Northumberland Coastal Challenge walk that is due to take place on May Day Bank Holiday (this, incidentally, is a walk of 26.2 miles from Budle Bay in north Northumberland past Bamburgh, Seahouses and Craster and ending up at the very attractive coastal village of Alnmouth).

After spending the night in Dundee, we set off the next day and eventually headed towards Glen Clova. At this point, please accept my apology to any readers. As I said before, this was new to us, whereas - no doubt - it is familiar to many of you.

To the uninitiated, Glen Clova is a fabulous place, with both sides of the Glen closing in as you travel further north-west and approach the forest of Glen Doll. The hills in the region are rather like the Cheviot Hills in Northumberland – a little at least – with gentle rolling hills that are far different – and I imagine are far drier - than the rugged mountains towards the west of the country. We parked in the car park at the Forestry Commission office in Glen Doll just after lunch and set off for a walk to Corrie Fee, a magnificent place at the head of the Glen. There was still quite a lot of snow in the region, especially on the tops, and although the day was bright it was still quite cold - hence our decision to wrap up warm. No t-shirts yet, I am afraid.

We walked for 45 minutes before eventually arriving at the head of the forest where the magnificent view of Corrie Fee opened up. After pausing to take some photographs we carried on walking before reaching the foot of the waterfall that cascades down from the slopes of Mayar and Dun Hillocks where we were caught in some snow. Not being equipped to deal with snow – at this point we were above the snowfall line – we decided that this would be a good point to turn back. Snow just having passed through. The trip back down through the forest was delightful – especially for my wife - with plenty of different birds to look out for, listen to and admire. These included a rare – well, for us, it was rare – sighting of two Crossbills – Common or Scottish is was difficult to say. Trying to spot some birds. Eagle..? I don't think so.

The weather forecast for the next day suggested that it was due to be dry but cloudy in the morning before the rain was due to come in in the afternoon. With this in mind, we decided to start off our walk quite early at 10.00 am – do bear in mind that this was a short holiday for us! – and head for Loch Brandy – a brisk walk up the hill for about 1.5 miles. We followed a sign that read ‘Public Footpath to Glenesk’ on the right side of the hotel and continued through a small stretch of woodland before emerging on to the open hillside beyond.

We climbed steadily from here but eventually reached a point where the way flattens out a little. Looking behind us, we could admire great views of the Glen, with the River South Esk winding its way through the landscape below. After another short pull, we rose over the lip of the corrie and reached Loch Brandy, a deep pool of water nestling in the curving arms of rock which rise up dramatically on three sides. Setting off to walk to Loch Brandy 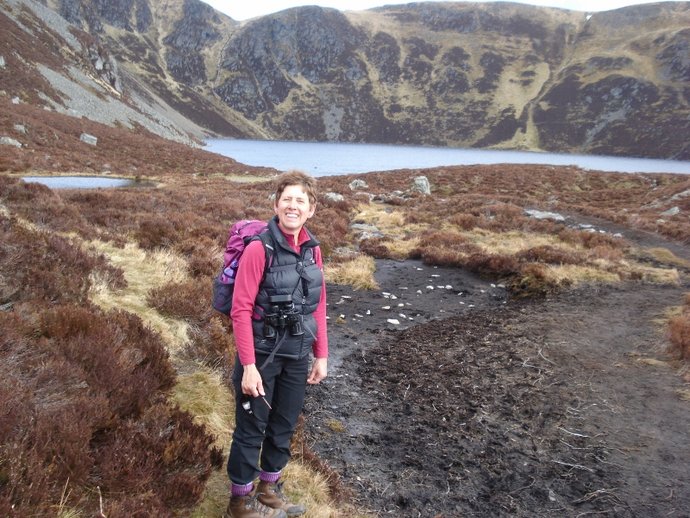 After pausing for a quick drink, we decided that the best way forward for us would be to ignore The Snub - a craggy shoulder that climbs quite steeply the left hand-side of Loch Brandy - and instead to climb the right-hand side and head for the highest point on this stretch of mountain, Green Hill. The views as we climbed were quite magnificent and stretched as far as the sea in the distance.

We paused for a well-deserved rest at the summit of Green Hill, 870 metres above sea-level, and took time to admire the remarkable views of Lochnagar and Mount Keen almost 10 miles away from our current location. My wife and Lochnagar in the distance. Me - just to prove I was there.

It was quite windy at this point so we decided to steer well away from the side where we could look down at Loch Brandy – we could save that for another less windy day, perhaps? Instead, we ventured through the snow and made our way around the top of the mountain before eventually reaching the top of The Snub. It was a little scary as we made our way down The Snub – bear in mind that I have only one working arm to do this with – with the wind holding us up, but eventually we arrived in one piece at the western shore of the loch.

From here it was just a matter of making our way back down to the hotel, which we did. We drove from here back to the Forestry Commission office and went for a further short walk before eventually the rain caught us up.

In short, it was a delightful experience to visit Glen Clova and enjoy the marvellous scenery and views. We will certainly go back there at some point during the next three years!

The following day, we set off for home but decided to stop off at the RSPB nature reserve at Loch Leven before eventually heading for home. We discovered that the RSPB have recently completed a circuit of the loch, which involves a walk of 13 miles. The weather was not particularly good – too cloudy for photographs – but we made it (and managed to fit some training in!) and thoroughly enjoyed the experience!