Think mountains and railways: think where?

Snowdon, Cairngorm or Kleine Scheidegg and the Eiger?

No: try Glas Tulaichean. But unfortunately the last train left in 1978. After carrying stone and ferrying shooting parties since the 1920s, it’s no longer around to save our legs when tackling this pair of Munros to the west of the Spittal of Glenshee.

Two things characterise the ascent of Glas Tulaichean and Carn an Righ: the walk in and the walk out. Both are long. Fortunately a parking charge of £2.50 allows the tarmac trudge between the main road and the Dalmunzie House Hotel to be avoided. An additional half an hour at either end of the day doesn’t have to be endured. Or was there a glimmer of doubt about purity of ascent, ethics and all that?

Nagging pangs of conscience pushed aside, and with one of the hotel’s pink raffle tickets in the windscreen, my walk up to Glenlochsie began. Before the farm I glimpsed the return route off to the right but, a few hundred metres beyond, evidence of transport-past made its appearance.

An incongruous set of rotting buffers stand by the side of the track. They signal zig-zags leading to the old rail-bed that stretches up the narrowing glen. Time and distance passed effortlessly while striding between sleepers made of concrete or weathered timber, although I had to be careful not to trip on the occasional ferrous stumps of protruding rusting bolts. A staircase of sleepers up Glen Lochsie

After a mile or so Glenlochsie Lodge appeared in the distance like a ruined Poldark tin mine; tumbled walls and a collapsing roof sad reminders of what must have once been a destination of choice for estate visitors and shooting parties in days gone by. The lack of horizon-galloping horses and bare-chested scything reminded me that I was in Scotland and on I pressed. Above the ruin, the route beyond was clear. Scraped into the hillside, the Land Rover track snaked up Breac-reidh. Higher stretches have become more and more worn, so much so that there is already a pair of parallel tracks grinding out a wider scar. Route finding posed no difficulty. And to finish off, metal spikes and fence posts provided a guide over the last few metres to the top of Glas Tulaichean.

Tramping over railway sleepers and following tyre tracks hardly gave a sense of getting away from it all. However, once the extensive views were scanned the marks of four-wheeled transport could be forgotten.

I lingered by the trig point then, fortified by peanuts and jelly babies, shunned the bee-line route directly across to the rounded hump of Carn an Righ. Instead, the fence posts were followed down the north east ridge and towards Loch nan Eun. Veering left, the shoulder at 922m was the point at which I dropped into the potentially boggy upper reaches of Gleann Mor. With the snow-melt largely soaked into the peat and after a surprising but welcome rain-free spell, I was able to reach the stalkers’ path with dry feet and clean gaiters. Since reaching the top of Glas Tulaichean my eyes had been drawn to this path, scratched like a chalk line diagonally across the lower slopes of Mam nan Carn and on towards Carn an Righ. It gave steady upward progress before launching me on the final 250m climb to the shelter and cairn of the day’s second Munro. The width of the Cairngorm plateau filled the northern horizon, impressively slashed by the groove of the Lairig Ghru. Beinn a Ghlo blocked out views to the west, while to the north east Beinn Iutharn Mhor tempted a pair of walkers who I met on the top. To the east the Cairnwell cluster of Munros completed the impression that this pair are quite remote.

Beinn a Ghlo from Carn an Righ

After a long lunch and rest in the sun I started the long journey back to the car. Until now, the prospect of the long walk out had nagged at my mind. At least I was now on the homeward leg. Little did I know how long that leg would be. While descending to the bealach a familiar bearded fellow emerged from beneath the peak of a baseball cap. A pleasant twenty minutes was spent chatting with Pat (aka Morecambe Monkey) as if we’d just bumped into one another on the High Street. After shared plans, best wishes and promises to arrange a meet-up during the summer months we went our separate ways. He too had his eye on Beinn Iutharn Mhor, but I was saved the extra effort having previously cycled up Glen Ey to slug it out from the other side.

Mercifully bog-free, the track to Loch nan Eun passed quickly. An Socach lay slumped teasingly across the horizon ahead. It remains my only unvisited Munro in this neck of the woods but I knew I had neither the time nor the legs to just “pop over.” Looking at the map while writing this it doesn’t look too far and I’ve begun to think what a wuss I’d been. I seek solace in considering the walk along its full length as the best day out and I have a cunning plan for a snatch on the way back from a future trip to Beinn a Bhuird. Well that’s my excuse. 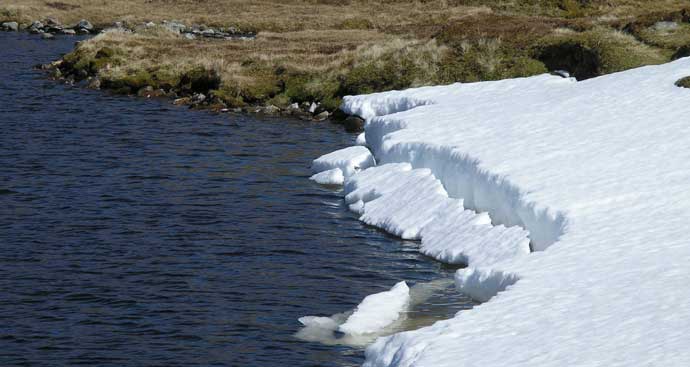 The loch-side remnants of winter snows were crossed, the top of the waterfalls reached and I finally faced the walk out down Gleann Taitneach. It looks a long straight way: it is. Actually it’s a bit more too as Glenlochsie is hidden round the faraway bend as well. My Munro count for the year was now into double figures, and I could throw in a handful of Corbetts as well. For the first time, despite time spent in the gym, I was feeling hill-fit, so maybe the last phase of the day wasn’t going to be too bad. 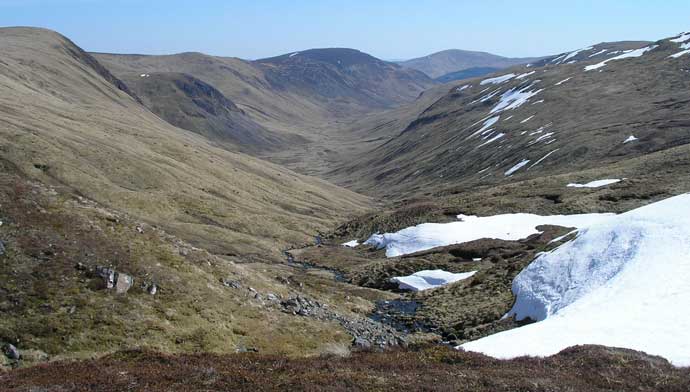 The long, long way down through Gleann Taitneach 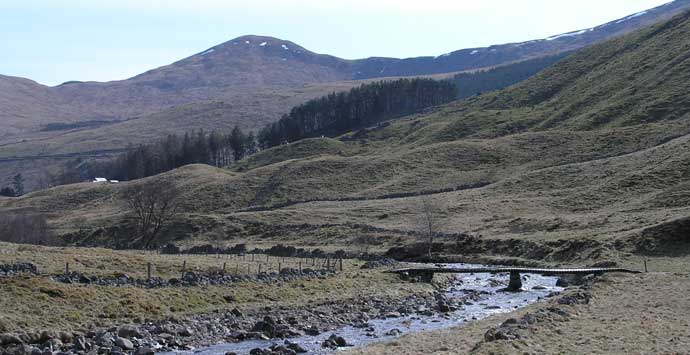 From starting to plunge down the steep path, to arriving back at the car took just short of two hours. No railways, no tyre tracks, just the track. And more track. And more. Until, with the trees clustering round the buildings at Glenlochsie drawing close, the footbridge over to the right broke the monotony. Dried out vegetation hung from halfway up the trees and bushes that line the Allt Ghlinn Thaitneich, testimony to how powerful it must be when in spate and how dry it has been recently.

Feet were aching now and it was with relief that boots were prised off and toes given the chance for some air and time to cool. Any lingering doubt about paying £2.50 to park by the hotel rather than walk up the estate road were dispelled in that moment of bliss.

Nice report and photographs there Nigel. The walkout down the Glen is nice, did it with the Grandson when wild camping at Loch nan Eun, a wonderful setting.

You picked a good day for these two

Aha, so that's how nice it can be. We got soaked on these two last year, saw zilch due to low cloud... but saved the parking charge by leaving car by the bridge (we're not purists, just didn't have small change

The ruins of Glenlochsie Lodge are an enchanting spot

A lovely report and very handy for me too (planning these in June), with your pictures showing the lie of the land. Oh how these hills and their neighbours have kept me entertained over the winter. Would I do them in one trip with a wild camp, or in two or three? An Socach is the spoil sport. Its situation makes combos with other hills a little awkward. I have now settled for two trips, but this may change again!
You had a great day for it.

I remember Glen Taitneach from a pre-munro life. Low cloud and steady rain, now that makes for a long walk in and out….