Day three of our long weekend in Perth.
We could'nt believe our luck! It's rare for us to get such a string of good weather days when we book a holiday in advance, we tend to take it as it comes and accept what it throws at us. This time we were lucky, very lucky.
Saturday was forecasted to be the best day up to now and with that in mind we would aim for Ben More and Stob Binnein.
We've always imagined doing these two on a fantastic sunny day and this was our chance. Set off from our digs in good time and decided to park in the forestry car park/picnic area on Loch Lubhair we thought about the side of the road near the farm but thought would be busy so decided on this, as it tuned out, there was plenty of room on the roadside but the extra distance was'nt too bad at all, we just had to be careful of the traffic.
As we walked to the start of the walk we noticed a large layby a bit further on which is closer, big enough to hold a good few cars and to top it off it had a butty bar on it as well, t'was a good job we'd had breakfast otherwise this could have delayed proceedings!.

We found the little sign for "Ben More" and off we plodded, steeply at first but on a good track with Ben More dominating the view ahead. Our first objective and a touch of sun

As the W.H route describes, go through the gate in the fence a little higher up the track and head uphill, there is a path forming albeit a soggy one but its there and you gain height quickly on it. Looking back down to the farm

As you get higher it becomes more and more obvious and when the old stone wall is reached its dry and well defined. Ben Challum, please, anybody, put me right if I'm wrong, 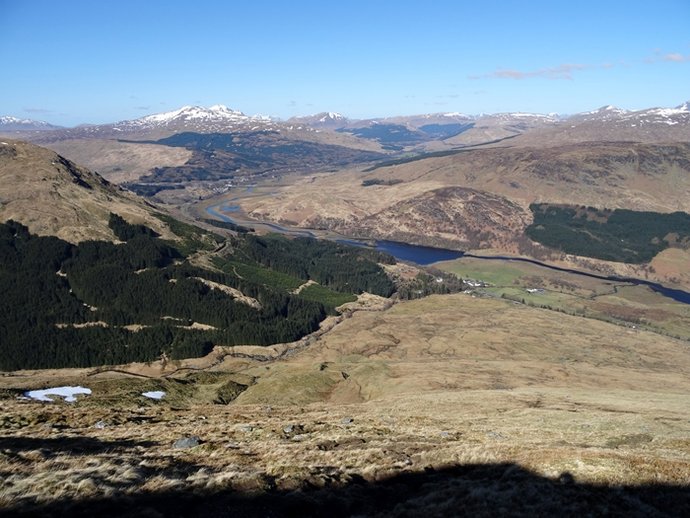 Views from just below the start of the wall

Its a long steady plod but not nearly as exhausting as we thought it would be and after 2 1/2 hrs from the car we were on the summit, there was a coolish breeze but the views were all we'd hoped for, mountains in all directions, hardly a cloud in the sky and the sense of being high was made better by the clarity. By the Trig, Ben More. Views from the summit, towards Stob Binnein The view over to Stob Binnein was cracking, still a fair bit of snow in places, we could see the drop between the two and its quite a big drop too. 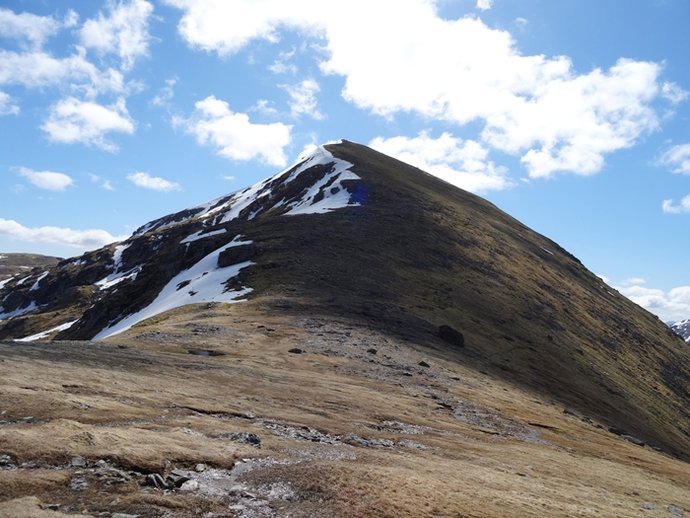 So after 15 mins of taking in the views we set off for Stob Binnein, the rocky step not far from the summit was banked up with snow so we bypassed it easily to the left and then it was a case of down one and up the other. We stopped by the large boulder in Bealach-eadar-dha Bheinn for a short break then set off for the summit.
It took 45 mins to get up, not too bad, and, again, the views just made it all worth while. The little breeze was still cooling things down a bit but we dropped off the summit slightly on the west side and managed to get out of the chill and sat down and had our lunch and, wow, what views to accompany your lunch. Ben Lui, planned for our May visit 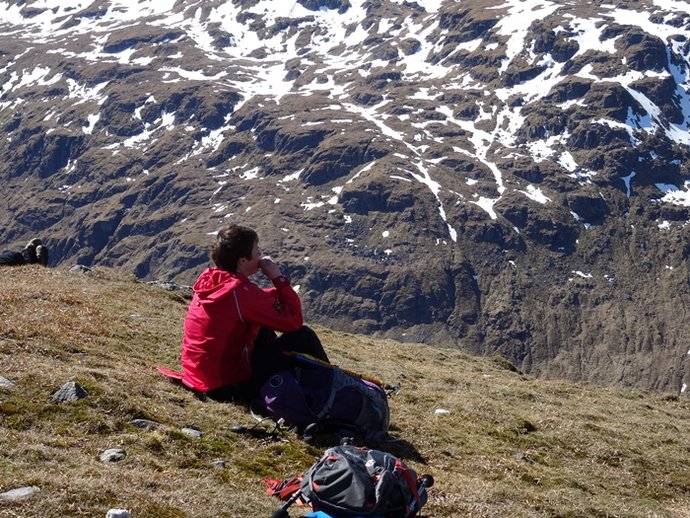 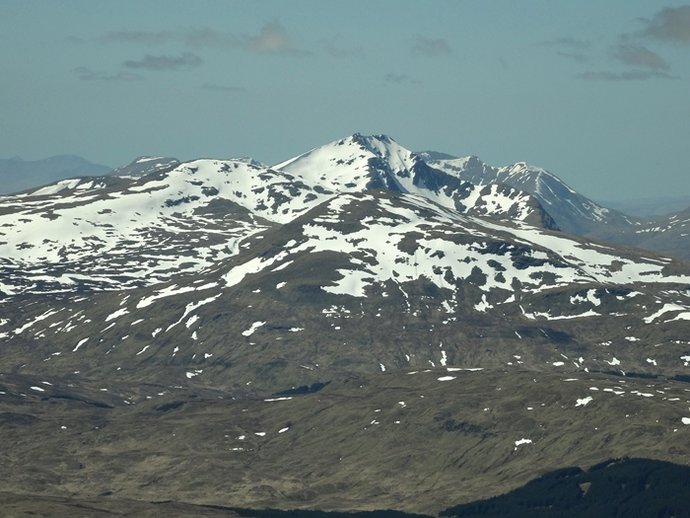 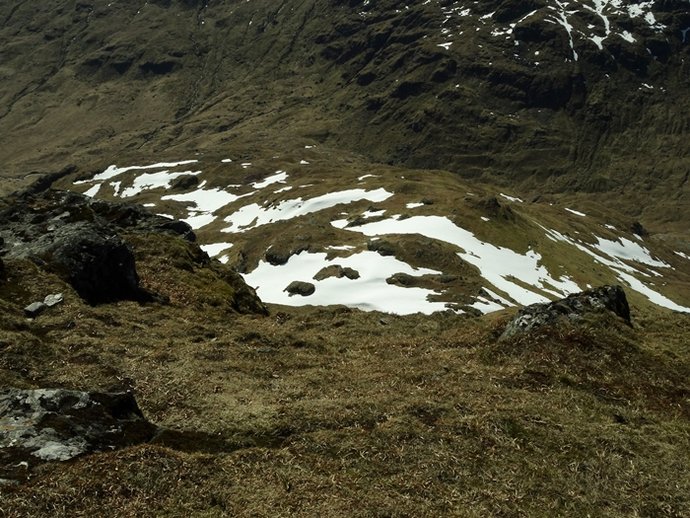 After 20 mins or so we reluctantly set off down the way we came, back down to the bealach and then directly down the slopes following a little burn towards the track by the Benmore Burn. 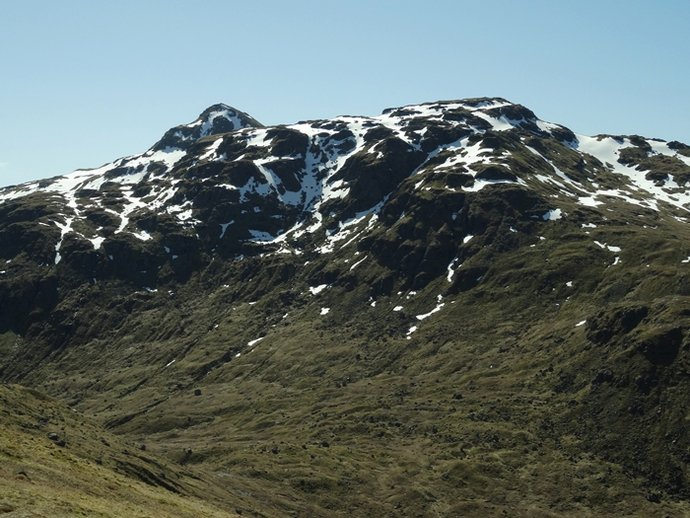 Cruach Ardrain from the descent slopes Its a bit soggy at the bottom here but there's a path that takes you to the track, and from there its easy walking back to the road. 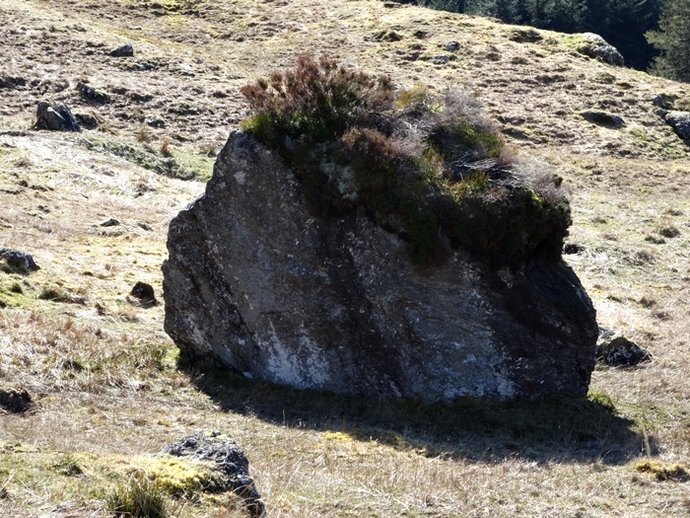 The walk from and to the picnic area adds about 20 mins each way so its a viable option to the road side and the afore mentioned layby is closer still but the temptation to undo all the days hardwork was still open so we ignored it and carried on, it might not have been so easy if we'd parked there.
We had a great day, Ben More and Stob Binnein was just as imagined, clear blue, sunshine and warm.

Re: When imagination becomes reality

I never saw a thing when I did these, but I remember the big boulder on the bealach. A perfect spot for a break!