Once off the now sunny slopes of Spidean Mialach, we fell into the car and drove the rest of the long and winding road to Kinlochhourn, the last couple of K on this road are hair raising to say the least! And i wasnt best pleased when i had to reverse 200 yards up a hill and round a corner for some toff in his daddys Landrover, especially to discover he was less than 50ft from a passing place, reverse gear must be an optional extra! Anyway slightly enraged did get there, paid our 2 quid for two nights parking and set about creating dinner!(29 cars in the car park!)

, it was tough going, although the scenery is second to none, id heard so much about Knoydart and i was staring to see why, and this was only the walk in! 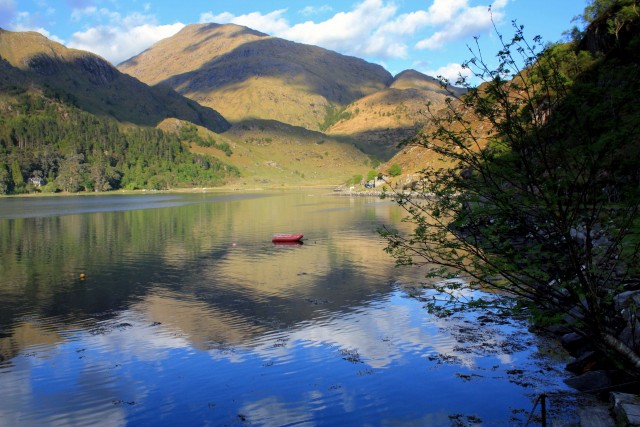 Thankfully the last mile is completely flat and we could enjoy the fantastic sunset! Shoulders aching we finally reached Barrisdale just as darkness was setting in at 10.30pm- took 3 hours, id never been happier to arrive! Tent thrown up, clambered inside for a few more rounds with my sleeping bag and the usual 2 hours sleep! 7am the sun is already peeking over Luinne Bheinn, the midges were out in force! Trying to tease the porridge through the holes in the midge hood wasnt easy! Brimming with energy from our excellent sleep and those good ol' oats we headed for Mam Barrisdale with the view of conquering Knoydart in a day! How Foolish! Spotted on track to the Mam Another flora shot by Dannyboy, A.K.A 'Snap'

In the heat with the factor 30 pouring off my brow like Niagara falls, we skidaddled(all be it slowly) to the Mam Barrisdale and took a sharp left up the boggy slopes of Luinne Bheinn,following the rusty fence posts most of the way, until they disappeared and we headed up a steep rocky slope to the summit ridge. Once the first cairn fooled us we finally made it to the correct one posing for more pictures, it had taken 3hrs 35mins, was quite punishing in the heat though and it was still early! All the sweating worthwhile though, views to die for!! Rum, Eigg, Ben Aden, Ben Nevis and everything inbetween, and our tent, what hillwalkings all about!Totally cheesing!! From the summit we followed the undulating ridge to Meall Buidhe, stamina wearing thin, feet hurting, struggling to find the will to go on, so many ups that i couldnt handle(my thighs had never worked so hard), so many downs my brother couldnt handle!(he claimed there was someone hidden behind his kneecap poking him!Heatstroke!) I vowed not to return this way, as was the plan was to return to the Mam Barrisdale and up Ladhar bheinn, as a nice way to end back in Barrisdale. Eventually at the summit just before two, had the time just not the physical edge, Ladhar Bheinn was lookin like a distant dream!! We owned the summit for some time until some more mountainners approached from the Inverie side. We asked for their opinion as we were in limbo, we wanted to descend down towards Inverie and approach the Mam from there, longer yes, but easier probably. They suggested we contour past Coire Odhair and two Lochans as not to lose height, so being outvoted we took their view and gave it a bash! Twenty minutes later was wishing we hadn't! 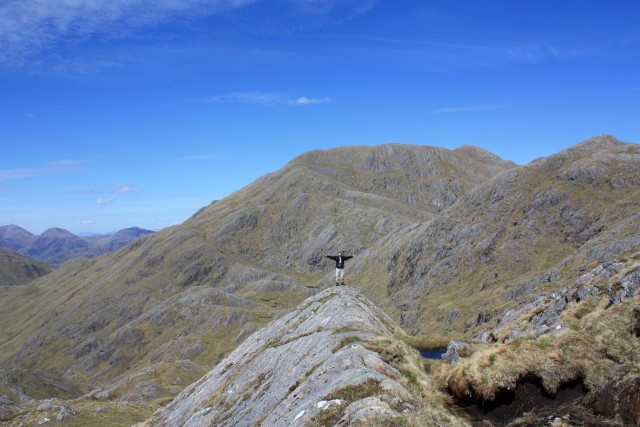 When it wasnt boggy it was rocky! A seat beside the lochan resulted in an onslaught of flies, not pleasant. We did however see some deer to distract our weary minds. There was another hefty ascent, this is when we both decided enough was enough, Ladhar Bheinn had escaped. Got back to base camp around 6pm after being scorched all day it was a relief to have a dip in the river, some Michelin star rated grub from the camp stove and probably the best lager in the world! Oh and a tremendous sunset, a slight breeze which kept the Ledgendary Knoydart midges at bay....absolute perfection! If Compeed made blisters, theyd probably be the best in the world! Only 6 cars remained from the 29 when we got there!

To be truthful glad we didnt bag Ladhar Bheinn as it will be nice to come back and savour the mountain on its own! Let it be known we shall return....The End

Great report Dannyboy,
Some excellent pictures and descriptions of the terrain. Nasty blister there

Love the pisture of the horse.

Yeah cheers, nah Dannyboy aint to keen on the compeed spent a tenner on the stuff, i was blister free and loving it!!!!

fantastic couple of reports from a beautiful area...
I came down here late one misty night camping, and a ghostly white horse spooked me badly at the end of the road... It just looked at me, without moving or responding to anything... wonder if its the same one... that was back in about 1994 tho...

It could be possibly the same one, or a relative, on the walk back there was three we could spy on the opposite shoreline grazing next to a church, they seem to be able to wander as they please.