After yesterday's exertions I had parked up in a layby in the Sma' Glen for the night. All of my night-time snores had frozen to the inside of the car windows, and it took a brew of coffee to warm things up. I had to be in Perth for lunchtime, and didn't think I'd woken up early enough for the planned Mor Bheinn and Beinn Dearg. Well, they might have fitted in, but not by the route I wanted to do. So I decided to go up Uamh Bheag instead, most likely tagging on Beinn nan Eun.

First light in the Sma’ Glen: 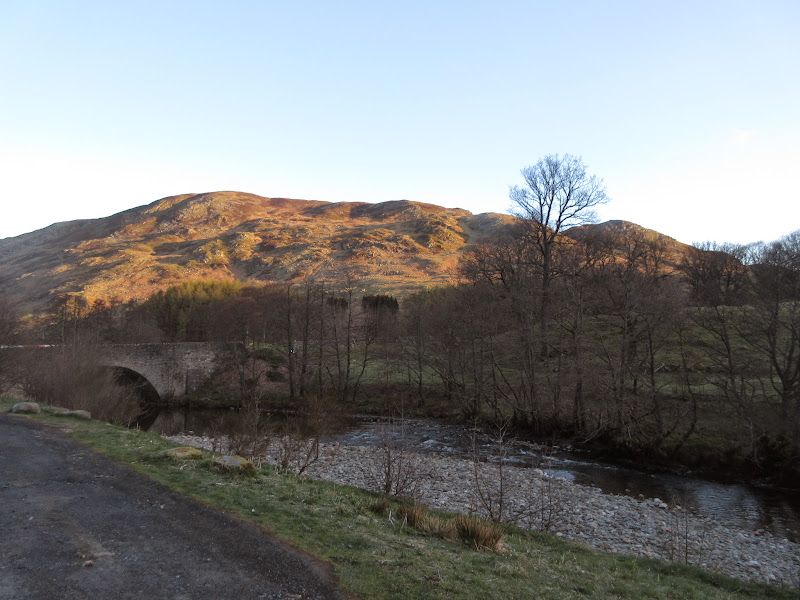 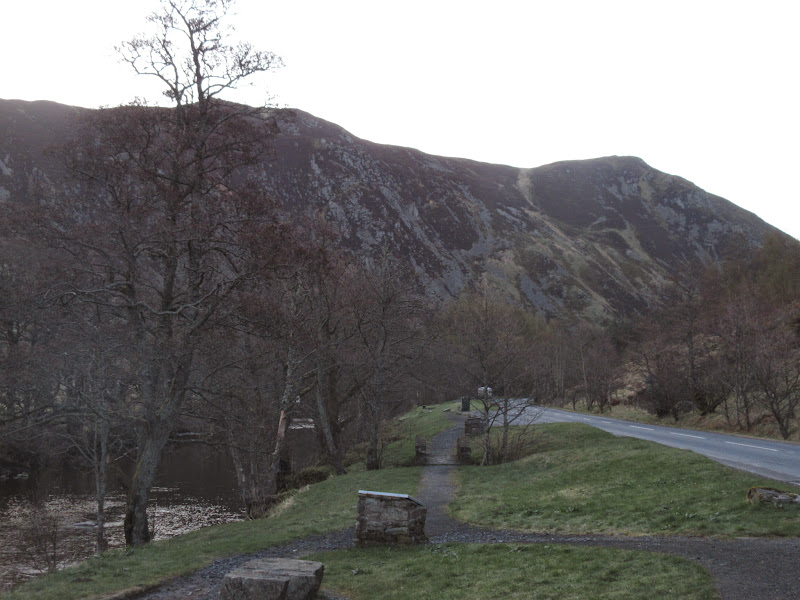 Uamh Bheag.gpx Open full screen  NB: Walkhighlands is not responsible for the accuracy of gpx files in users posts
I was parked up in Glen Artney and walking by 7:30am, and headed through the gate over the road. I walked through grazing and climbed a couple of stock fences, taking me over the shoulder of Auchnashelloch Hill. I took the spur up the east side of Coire na Fionnarachd. Like yesterday, the going was dry - great as in my mind, this was a boggy hill. 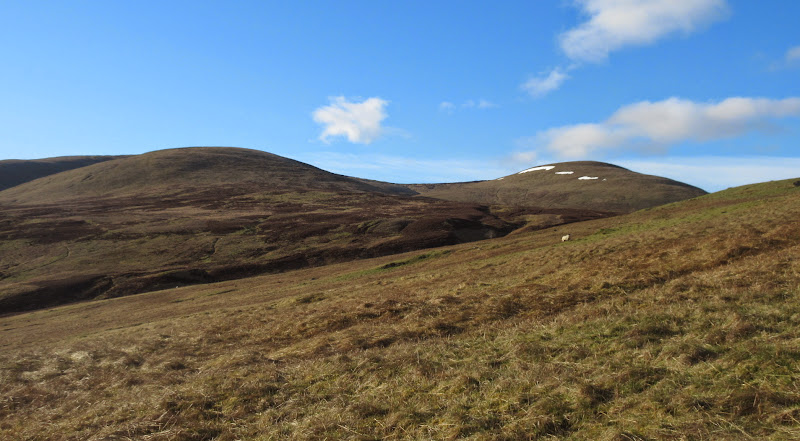 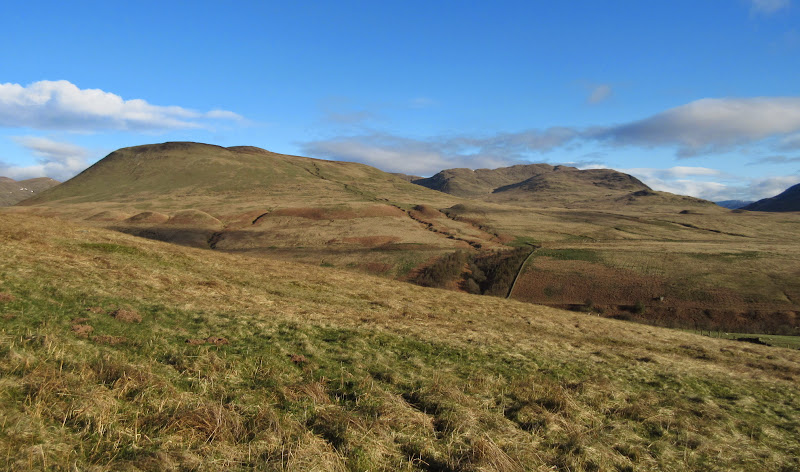 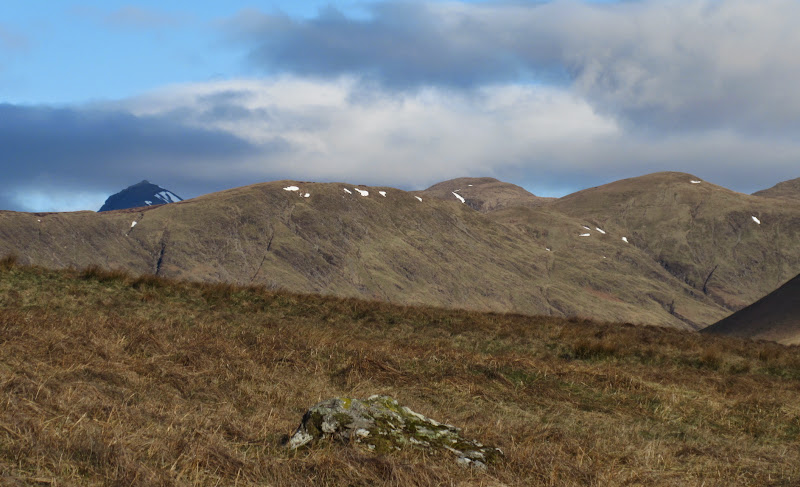 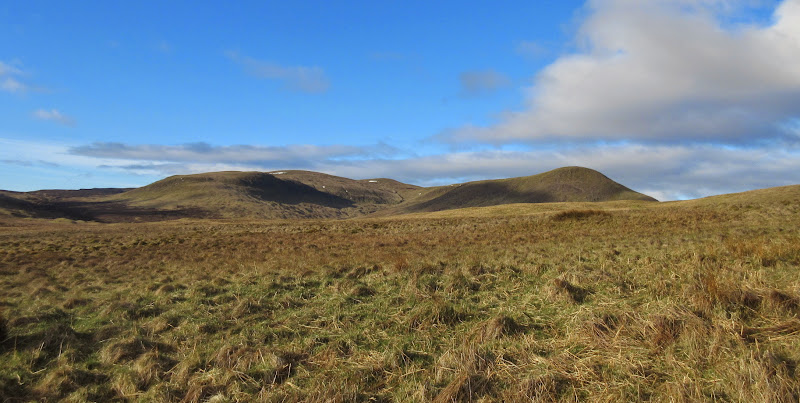 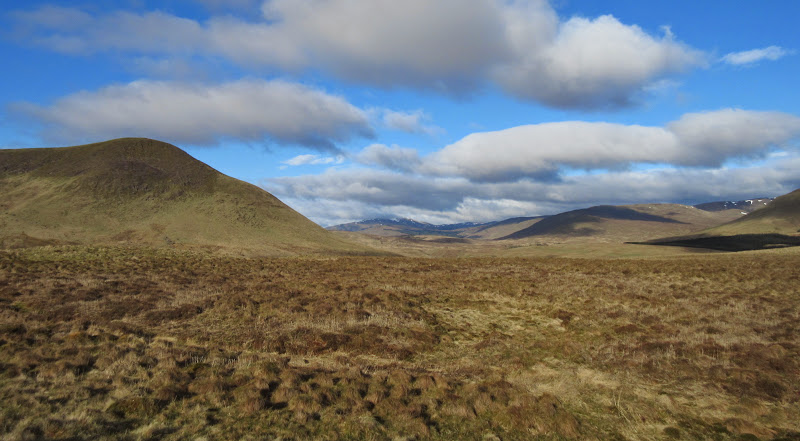 While the spur was mostly dry, there were a few boggy pools on a couple of flatter areas. Easily avoidable for me, but one of them held a stuck ewe. The ewe was submerged up to its neck, and making a feeble attempt to get out. I wasn't really sure what I could do, but I spent about 10 minutes trying to free it. While I managed to free its front legs, the rest of it wasn't going anywhere fast. Not a lot more I could do really, so higher up near the summit, I called directory enquiries to see if I could get one of the local farms on the phone. No luck there either. Since I was now the best part of halfway round, I decided to push on and try and find the farmer once I got back down. I'm usually pretty good at pushing problems that can't be dealt with to the back of my mind, but the rancid stench of boggy sheep on my hands kept it at the forefront! 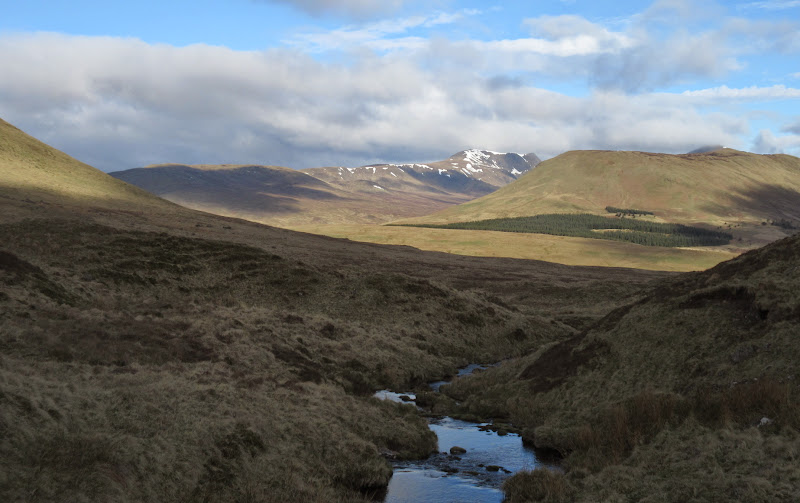 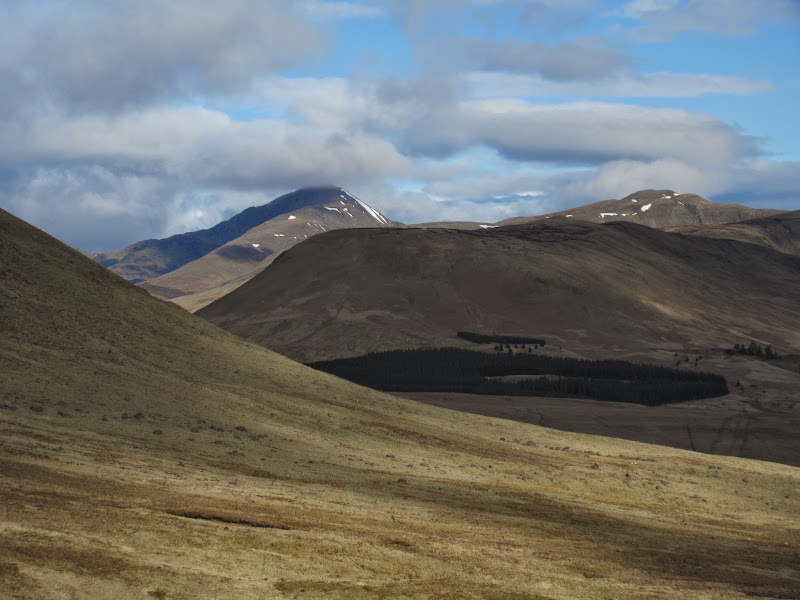 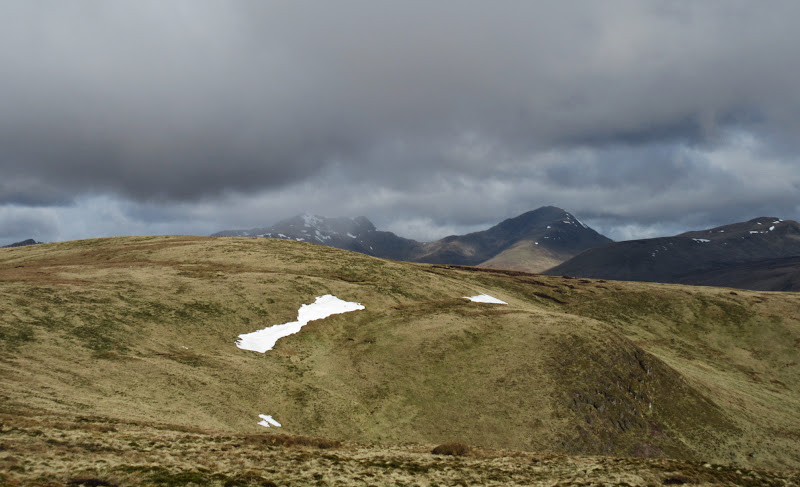 …with snow moving in: 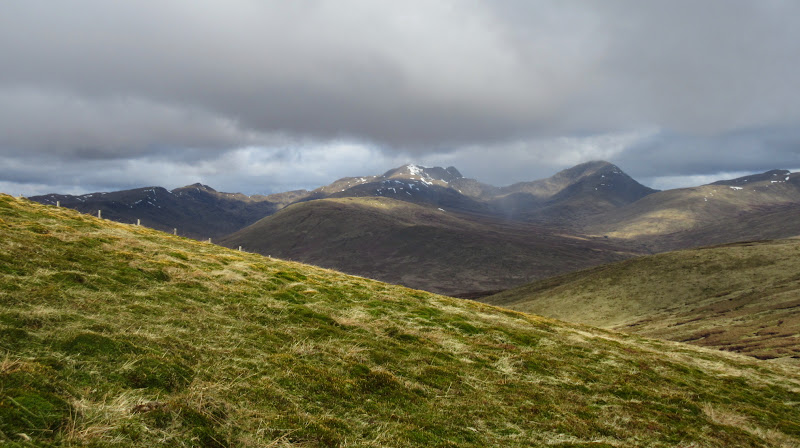 I contoured round to the western summit, where it was cold, calm and atmospheric. There was cloud and snow moving in. Like Sgiath a' Chaise yesterday, I'd earmarked this hill as a boggy morass, and was pleasantly surprised at how dry and pleasant the summit area was. 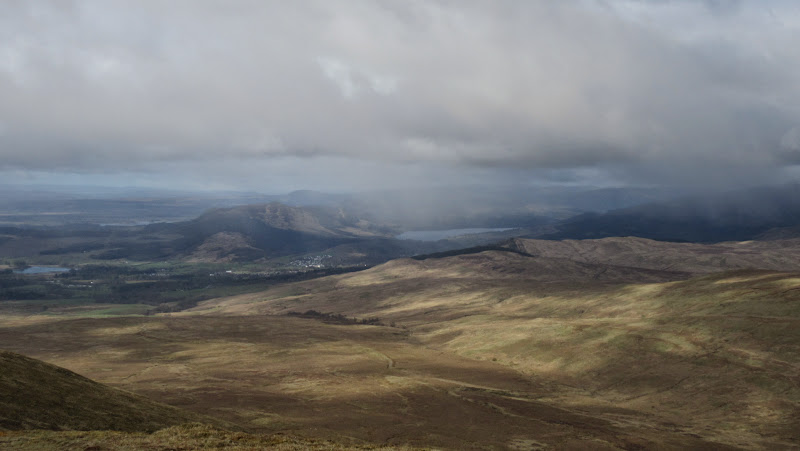 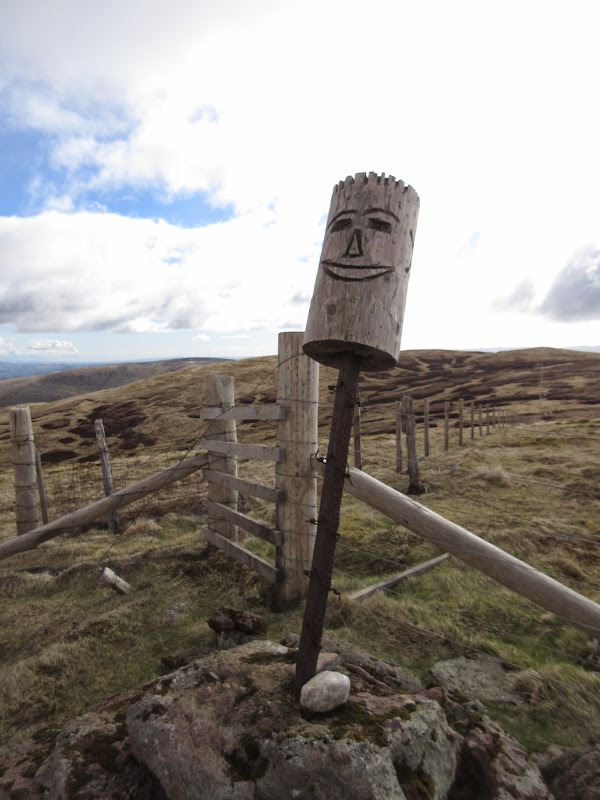 I passed the trig point on the eastern summit and descended towards the windfarm. Now it became obvious that Beinn nan Eun was the scruff of the pair, this being particularly obvious at the col itself.

Was expecting much more of this to be honest: 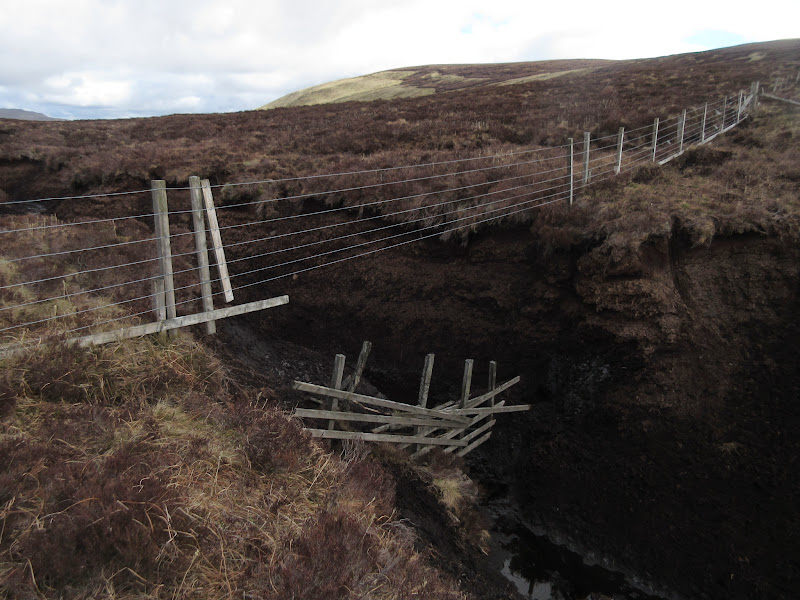 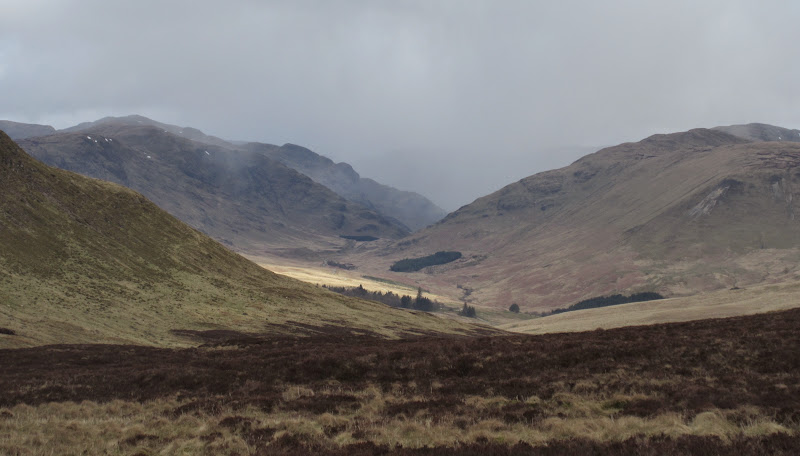 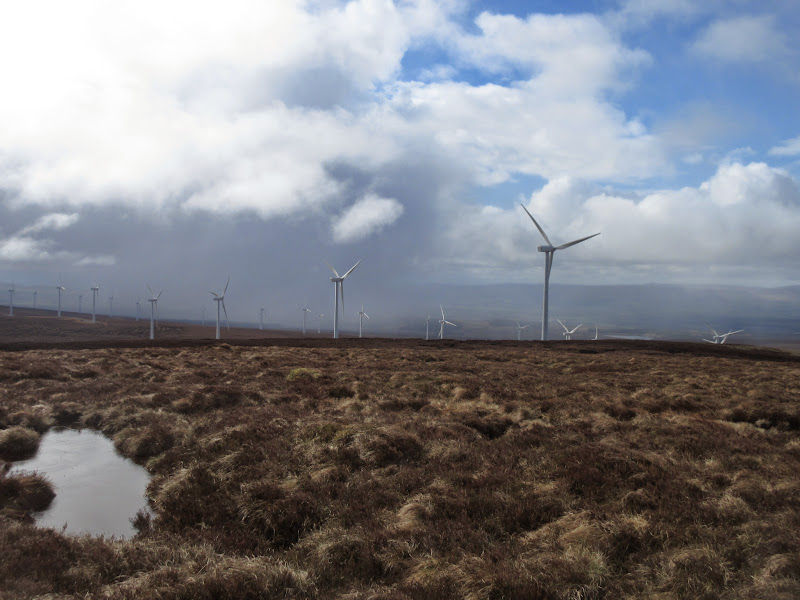 The ascent was pretty dry but the peat hags were fairly extensive and I was glad to get to the summit plateau. Just needed to make it over to the actual summit, a little further to the west. Surprisingly, the initial eastern summit is also a separate New Donald (not that I'm collecting those or anything).

at least it was mostly dry: 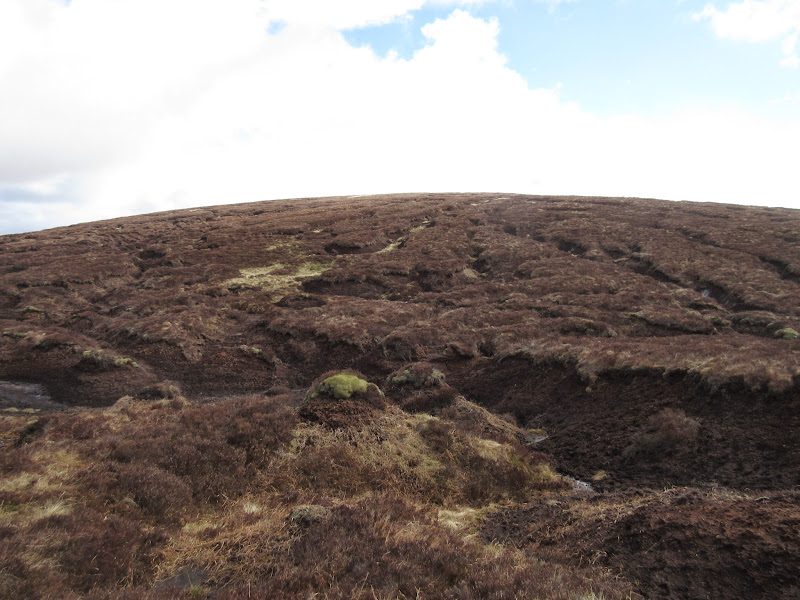 Fortunately Beinn nan Eun has a redeeming feature - its steep eastern corrie. I stopped briefly at the rim for a break, before crashing over a few more hags to get onto the NW ridge. 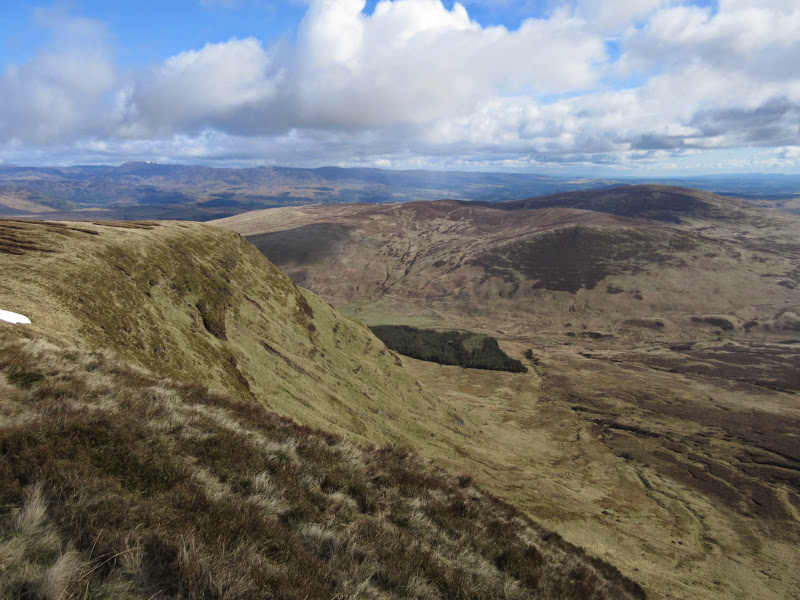 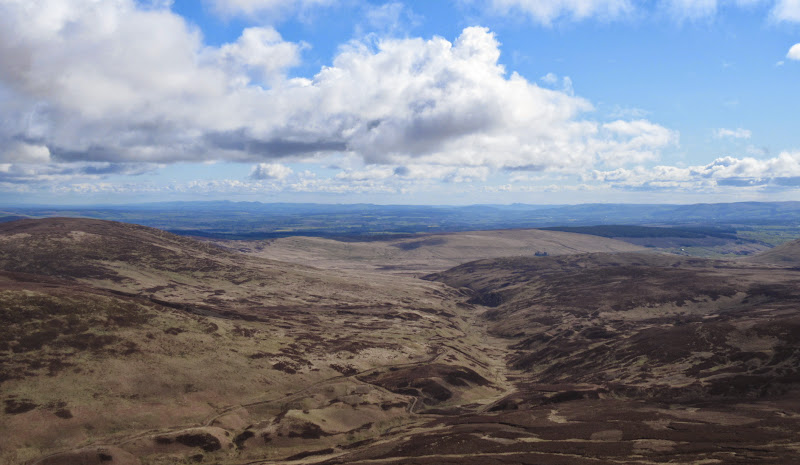 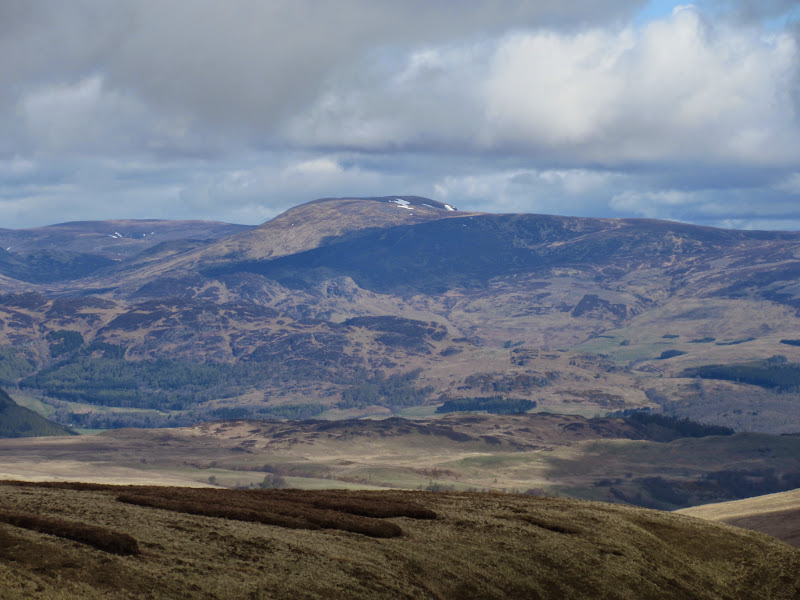 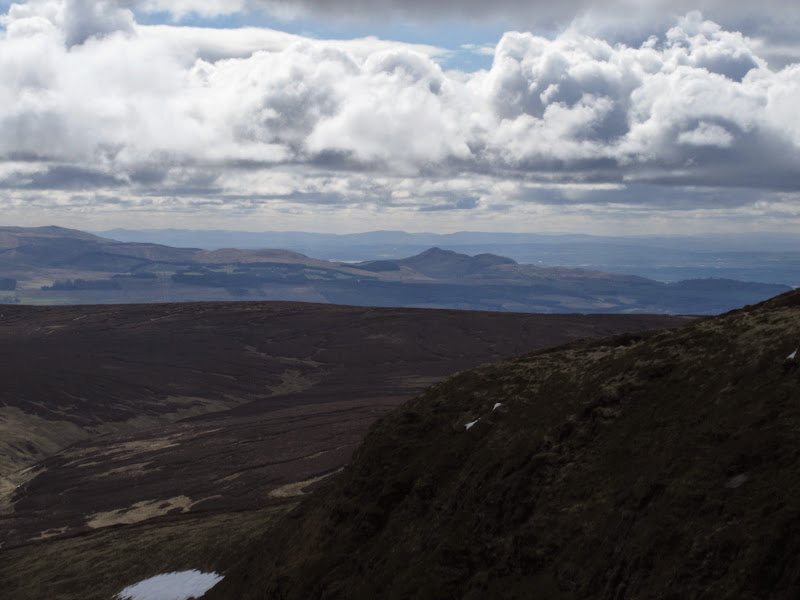 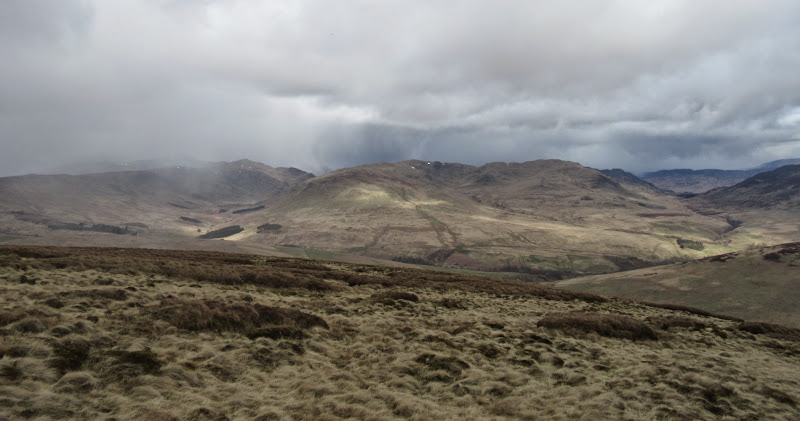 The going soon got easier, then there was a final crash through the heather to get to an un-marked bridge over the Allt Mor. This is where the snow really started coming down for a short while. 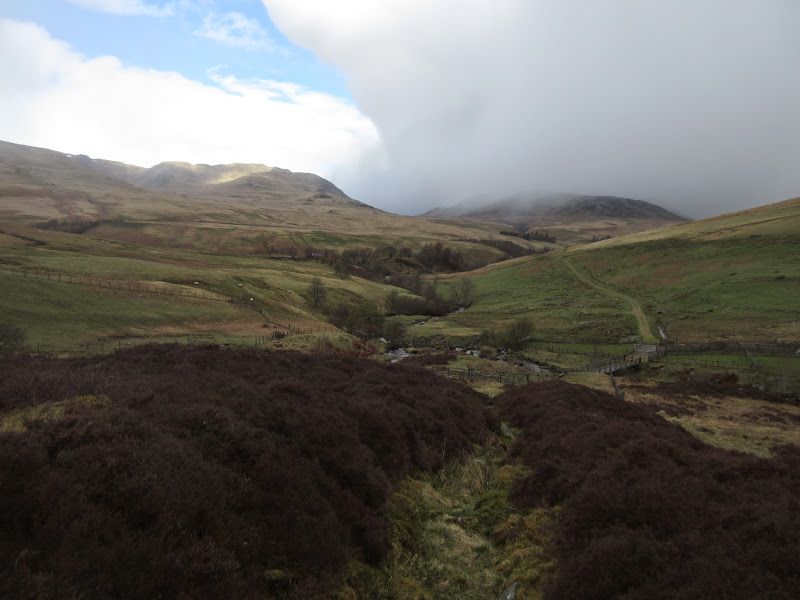 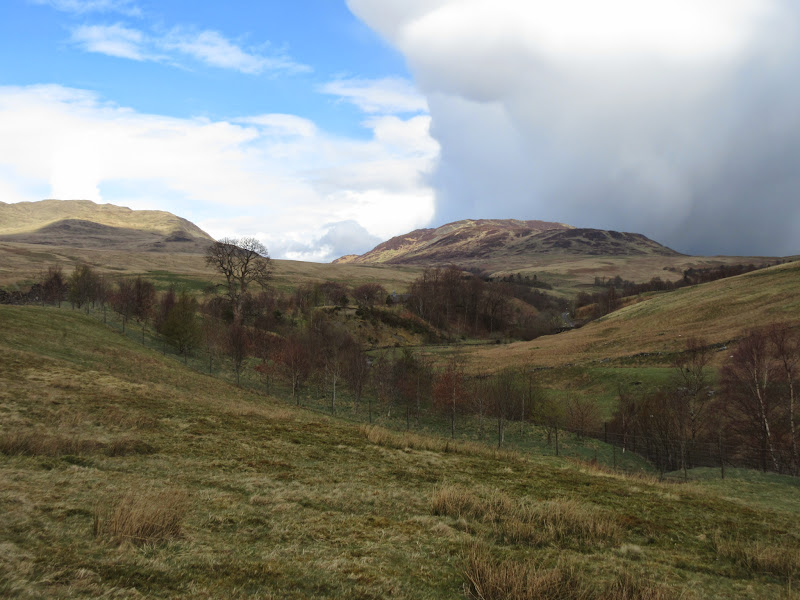 It was an easy walk down the rest of the Findhu Glen to the car, passing many new lambs and the Glen Artney Church. 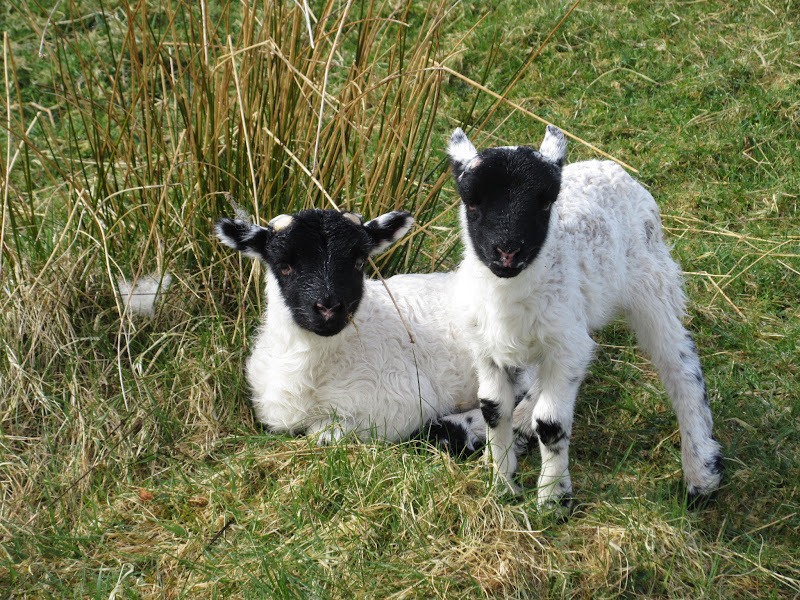 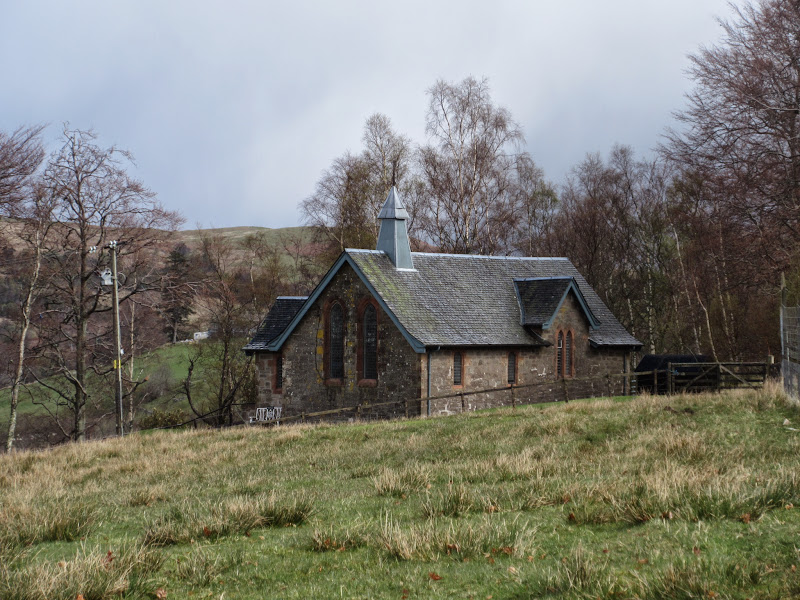 I tried pulling in at Dalchruin first, but despite the sheds being in use, the farmhouse was boarded up. Fortunately I found the farmer a mile or so further down the glen, and was able to let him know about his ewe. Not sure if he would have found it though - I could point out on the map where it was, but despite appearing to know every hag and knoll of the glen, he wasn't much of a map person. Despite my best efforts, I'm not sure if I managed to get the information over. He was off heading off with the quad bike shortly after - I hope he found his ewe.

A good day out, atmospheric at times and mostly more interesting than expected, but a bit of a shame about the ewe. I just about made it to Perth in time but spent longer than expected in the toilets at Tesco trying to scrub out the reek of smelly sheep before going for lunch with family.

While there were some flurries of snow and hail, I didn't think it would amount to much. I changed my mind about that by the time we got to Strathspey! It was rather surreal to get home and have snow piled up in the garden, and strong sunlight until 9pm!

Some time later, on the A9: An odd day right enough. I've stowed these two away for a half-day or evening pretty soon, cheers.

Good to see these two hills in a report again.

Enjoyed both of them when I did them but I found the walk past the windfarm heading up through the peat hags to Beinn nan Eun a bit of a drag. Felt like I had to walk 60 yards to gain 30 wandering round all the peat hags - mind you, approaching from the opposite direction was no better as there are loads of peat hags there as well.

Don't suppose the road up Glen Artney is any better yet - a bit of a car wrecker on my last journey.