A hazy lazy day round the Gables.

A hazy lazy day round the Gables.

our_route.gpx Open full screen  NB: Walkhighlands is not responsible for the accuracy of gpx files in users posts
My initial plan for today was to go to Wast Waster and take in some fells there. Unfortunately, the weather forecast scuppered that with a heavy haze from the west forecast, so it was back to Seathwaite again for a trip round the Gables. It was really warm as i left Seathwaite and headed for Stockley Bridge. Headed quickly up past the 1000ft boulder, with Green Gable coming in to view. Following Styhead Gill, the view ahead was almost obliterated by the haze

but a bit of snow was still evident on Scafell Pike. Looks like there has been some lovebirds up here recently Unsure which way to tackle the Gable from, decided to head up Aaron Slack to Windy Gap, as i had never been up this way before. Awful route i must say

From Windy Gap the views weren't much better. 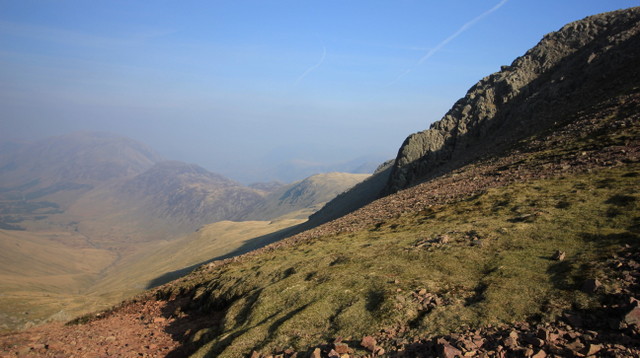 Across Haystacks to High Stile ridge.

I decided to head across to Kirk Fell first and followed the higher path beneath Gable Crag. Headed down to Beck Head and over to begin the ascent of Rib End. This is a pretty easy ascent, but it was really warm by now, and extra suncream was called for

Went over the north top and on to the actual summit. To Pillar and High Stile ridge.

Skirted the edge of Kirk Fell before going back down to Beck Head and heading beneath Great Gable, making for the White Napes. Kirk Fell and Haystacks from ascent.

There is a lot of loose scree to start, but the scrambling over the Napes makes it worthwhile. Westmorland Crag from exit of Napes.

You could just about make Wast Water out from here, glad i didn't go round there!! Climbed round Westmorland Crag to the famous old cairn. There was a fair few people at the summit, so after a short stop headed off to Windy Gap again!! Plenty of fells from Gable top. Unusual addition to the summit.

Was a decent view down Ennerdale from Windy Gap. It is only a short climb to the summit of Green Gable from here. With not much reason to hang about, i made for Base Brown, my final top of the day. Again, it is easy going across here, mainly due to the long dry spell There was some climbers on Raven Crag below Grey Knotts who could be heard for miles!! Made for the Hanging Stone, which i nearly carried on straight past After this, Sourmilk Gill seemed the obvious route down, and it is quite an interesting descent. There wasn't much water in the gill, but it is still eye-catching. Sourmilk Gill falls at the slabs.

A good walk, spoilt a little by such a heavy haze

but i did enjoy it, all the same.

Re: A hazy lazy day round the Gables.

Some fine country covered, shame about the haze. I just recently used Aaron Slack for a descent and it was fine, I can imagine it being a somewhat tedious climb.

Re: A hazy lazy day round the Gables.

A damn fine route and a shame about the hazy conditions, but at least you got it done on a good, dry, sunny day.