Creag Mhor and Beinn Heasgarnich had become a bit of a standing gag for Tom and myself, having threatened to climb the two of them on several occasions over the past couple of years, but never followed through... The fact that Heasgarnich seems to be universally associated with the adjective 'sprawling', plus much rumour of acres of sheep-infested bog around it, was always bit of a disincentive

. This time, though, it was to be different. We'd earmarked the Saturday 2nd May for a walk a few weeks ago, and initially we had grander plans - maybe Stob Choir'an Albannaich and Meall nan Eun; the Ring of Steall was even mentioned

. In the event, however, an iffy weather forecast (reasonably clear at first, but deteriorating steadily through the day with high winds later on) put paid to anything more ambitious, so we set off for Glenn Lochay to tackle this Gruesome Twosome

our_route.gpx Open full screen  NB: Walkhighlands is not responsible for the accuracy of gpx files in users posts
We got an early start, as this is a fairly lengthy round with a long walk in. As we arrived at the walkers' car park just short of the end of the public road up the glen, the sun was at least shining, although the Munros still had their heads in the clouds. We walked on up the glen, past Kenknock farm and some Hielan' Coos, to where the private Hydro Road heads steeply uphill, at GR 466365. The hydro road's zigzagging course certainly made for some easy initial height gain, and soon we were up at the point where a good hydro track branches off to the left to contour right on up the upper glen. There is a huge hydroelectric pipeline just at the start of the track: an impressive bit of engineering! As we stoated merrily up the glen, Ben Challum was looking very impressive out to the west, although worryingly it still had its head firmly in the clouds. We soon reached the bridge over the Allt Badour... ...And then, further west up the glen, the bridge over the Allt Batavaime, where the actual climbing started. We paused for a brief look back east down Glenn Lochay: a nice sweeping vista. Just on the west side of the Allt Batavaime bridge, we left the track to tackle Sron nan Eun, the 'Nose of the Birds', which is Creag Mhor's craggy southeastern spur. This first section is pathless, and we weren't initially too sure of the best way up through the crags. There are probably a large number of possible routes, which is part of the fun of the thing. In the event, we headed up slightly to the right of the main crags, eventually joining a line of deer fencing which we followed uphill. As we got up to the crags, a handy big snowdrift had almost completely engulfed a section of the deer fence, so that we could just climb up the snow and step easily over: very useful

! Once over the fence, we found a grassy ramp that bypassed all the main crags.
It was a steep climb up the Sron, but thankfully the fact that it is south-facing meant that there were no significant Snow Issues, and there was a good view back south-west over Ben Challum for distraction. It now had its head nearly out of the clouds: Once finally up at the top of the Sron, things improved immensely, with Creag Mhor's shapely summit coming into view at last, and a pleasant high-level promenade leading on towards it. Needless to say, I can never resist spoiling a good view by plonking myself in front of it: Before long, we were up at the summit cairn: almost exactly twelve noon, so we had made reasonable time so far. It was from this point onwards, however, that things started to get a bit interesting. Firstly, as it isn't possible to descend directly eastwards from Creag Mhor towards Beinn Heasgarnich (because of the Big Crag that presumably gives the first hill its name), we had to descend north-west from Creag Mhor's summit. And although the snow hadn't been too bad so far on the south-facing slopes, there were humungous shedloads of the White Stuff as soon as we got onto the north-facing slopes. The wind had picked up too, and there was a lot of spindrift, reducing our visibility to almost zero for ten minutes or so. Because of this, we wandered a bit too far to the west on descent, and soon we realised that we were descending on the wrong side of the ridge, towards the Abhainn Ghlas and Beinn nam Fuaran. On the plus side, this gave us the best views of the day, with some grand vistas out over all the snow-capped peaks to the west. Looked like they were having better weather than we got 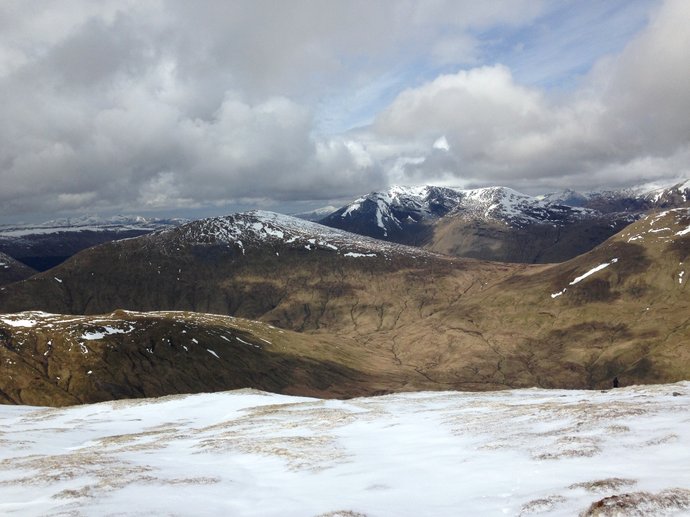 Eventually we fought our way back north-east through a lot of deep soft snow - a hard slog - to reach the bealach between Creag Mhor and Meall Tionail, and cut down eastwards towards Sron Tairbh, 'The Bull's Nose', which is the craggy western spur of Beinn Heasgarnich. It was looking a long way down to the boggy bealach, and then a long way back up again; and the Sron was eyeing us malevolently, as if to say, "Come and have a go, if you think you're hard enough..." The wind was picking up steadily too, and we were in two minds about whether Heasgarnich was going to be feasible, or if we should cut our losses and head south from the bealach.

Needless to say, once down at the bealach (thankfully not nearly so boggy as it looked from above

), a decision was made to 'have a look' at Heasgarnich after all. We started off up the Sron, stopping for a quick lunch break at the first band of crags, then setting off reinvigorated. It was a steep climb up the Sron, but just before we disappeared up into the Clag, we got a nice view north over Loch Lyon: The view back west to Creag Mhor from this point demonstrates why a direct descent east from the first Munro isn't possible: Big Crag indeed! The Clag descended with a vengeance before we'd even reached the top of the Sron, and as we topped out onto the ridge, the north-easterly wind hit us like a hammer. Yet more shedloads of snow, too, and we couldn't see a thing. Undeterred, we trudged on (with much compass and GPS work) towards Stob an Fhir-Bhoga (Heasgarnich's south top), and on northwards up Heasgarnich's undulating south ridge. The weather just got worse and worse, with a good fifteen minutes of near-whiteout and howling gales, and to be honest we had pretty much decided to chuck it in and head back south, when the summit cairn finally hove into view. It is described as a 'windshelter cairn' in several guidebooks, but in fact it was facing completely the wrong direction to give us any useful shelter today.
Tom at Ice Station Zebra, a.k.a. Heasgarnich Summit: - I can honestly say that I've never felt less sheltered on any Scottish hill, ever. The reason we are both sitting down in these photos is that we couldn't stand up without risking getting blown away. I almost found myself doing a bit of unscheduled parascending while trying to get my rucksack back on

. Obviously not a day to hang about, so as soon as we'd got the obligatory summit photos, we headed straight off south again. There are two ways down from Heasgarnich - the classic route to the east, through a huge peat bog to join the northwards continuation of the hydro road to Glen Lyon, or what seems to have become known as the Bog-Free Route, heading south down steep grassy slopes to re-join the Glenn Lochay hydro track at the bridge over the Allt Badour. There was no difficulty deciding which one to go for today: the Bog-Free Route was going to be the quickest way down. Thankfully, as soon as we started to head down left off the ridge a bit north of Stob an Fhir-Bhoga, the weather improved immensely and we could see where we were going again. There was even a bit of a view across Glenn Lochay to the Munros on the south side: The flat-looking bit of slope in the photo above is deceptive: this was just a brief boggy shelf about halfway down, and the majority of the descent is on rather steep grass, with brief bits of snowfield for variety. Nevertheless, it was a straighforward enough descent down to the track at the Allt Badour bridge.
Of course, we were a bit behind schedule by now what with all the snow and heavy weather, so inevitably it felt like a bit of a Forced March back eastwards along the track to rejoin the hydro road at the pipeline, then descend past Kenknock Farm down to the foot of the glen. All the same, we stopped to admire the waterfalls on the River Lochay just before the car park: A game of two halves, this one, on the whole. Creag Mhor was great fun, a surprisingly shapely peak, but all I can really say about Heasgarnich is that we were glad to get it done

Wow, looks and sounds like mid-winter and just remember that spring is on the way - in May! You had quite the adventure though.

AnnieMacD wrote:Wow, looks and sounds like mid-winter and just remember that spring is on the way - in May! You had quite the adventure though.

A bit more adventurous than we'd bargained for, to be honest, given that it's supposed to be May

! Glad to get these two ticked off, all the same

The Gruesome Twosome is an apt description for these two! And they’re in the bag now!

There was no snow when I did them, but the wind made up for this. I didn’t bother sheltering behind the cairn. Getting off the hill asap was my priority!