Having spent four great hill days in Scotland two weeks earlier, we were hoping for a repeat performance for our forthcoming week long holiday.
Well, looking at the forecast for the Bank holiday weekend, the start of our week, things weren't looking too promising after Saturday so we thought our decision to travel up to Stirling on Friday night instead of setting off Saturday was probably a good call so we'd have to take advantage of our extra full day and get out and get an easy-ish hill done and then take the rest of the week as it comes.
Ben Challum was chosen simply because it's easily accessible from the main road and it's near to our destination.
We were hoping the forecast was right and, as it was, it wasn't too far off apart from the cloud base being lower than we'd hoped and the mountains had had a decent dumping of snow, something I'd known about but hadn't realised how much, it was a real contrast to what the mountains were like two weeks earlier.
I parked up in the layby on the A85 immediatly after the entrance to the little track leading to Kirkton Farm, the layby is on the left as you travel towards Tyndrum.
We got the togs on and were off, following the track to the farm and then headed up towards the railway. Went through the gate and continued on the track for no more than 100 m and turned right off the track onto a path marked by a small cairn.
From here the climb up is easy, a few wet bits and a couple of steepish bits but it's good going all the way to the south top, you follow a deer fence and this stays with you almost to the cairn on the south top. The view from the slopes of Ben Challum to Ben Lui, the snow line obvious. 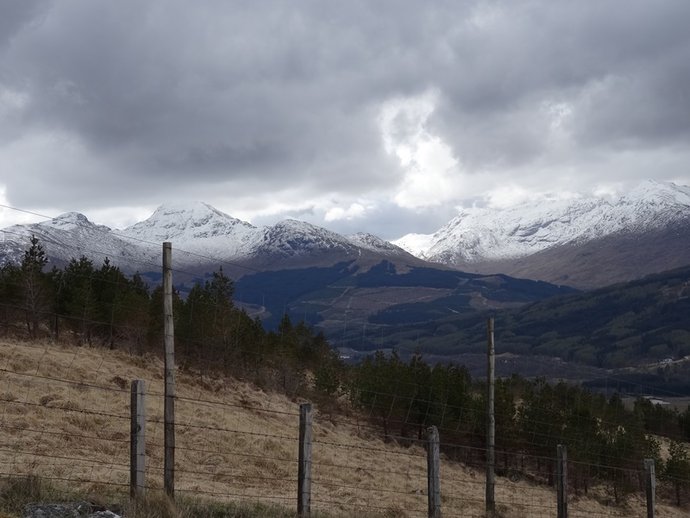 Cruach Ardrain and the Deer fence

In the mist from the south top we travelled west for 100 mtrs or so to pick up a fairly distinct ridge and followed this and stayed with it into the bealach and then we started the climb onto the main summit which is soon reached. 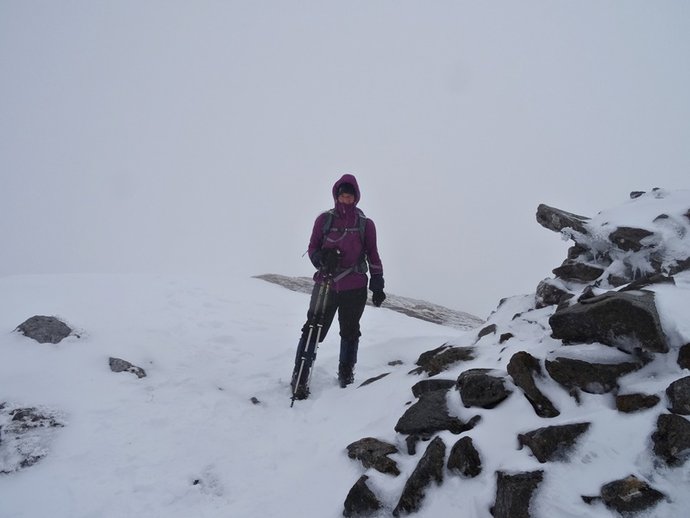 Denise on the summit, rather unexpected conditions but they didn't cause any problems.

We had no views at all from the top unfortunately, the fresh snow was deep in places and was being blown around by the strong wind.
We retraced our steps from the summit following the footprints in the snow, 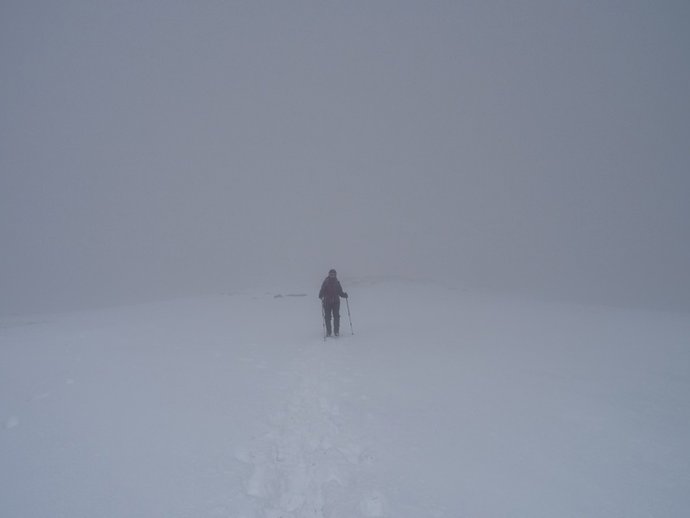 Coming off the summit, nice views. 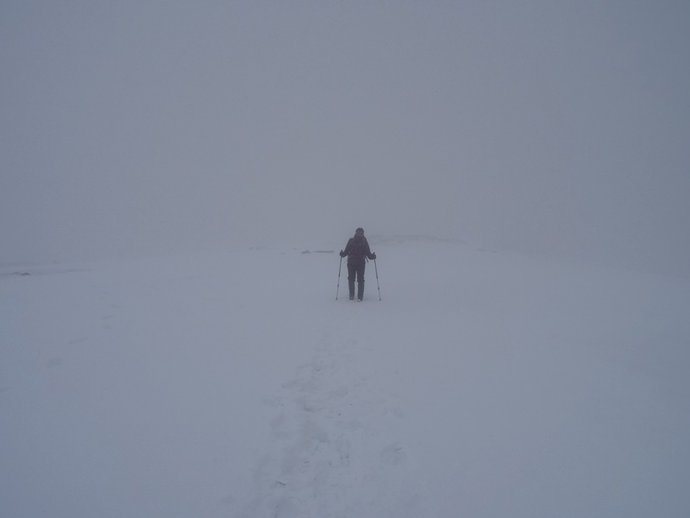 Denise steadying herself, strong winds, our poles helped us to stay upright.

back to the south summit here we were treated to a view back to the summit it was a brief view but it was enough to show us what we'd been on. Looking back to the summit, its surprising how often this happens, clearing skies it didn't last long tho'. zoomed view of the summit, snow over exposing the shot. I managed to get a better shot of the summit but the cloud came in again soon after.

The Wind was getting pretty strong by now so we beat a hasty retreat satisfied with what had turned out to be a decent trip out, its better than working even though the views were not good from the top. Further down we could see the mountains around us which, as usual, had started to clear of cloud. 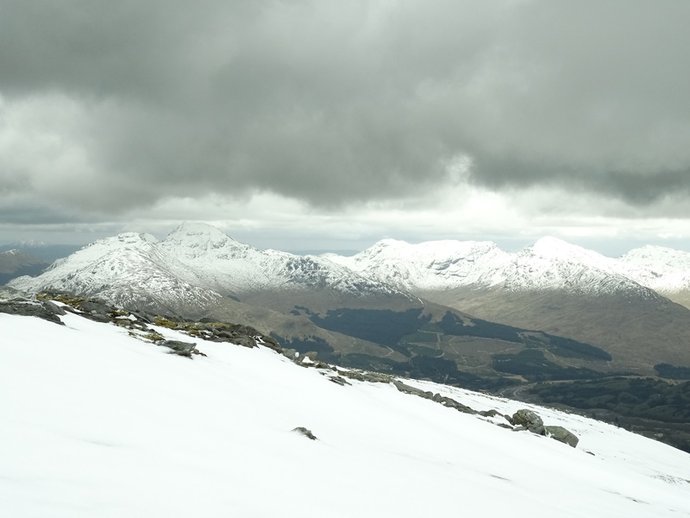 The mountains showing the snow line and the cloud lifting. 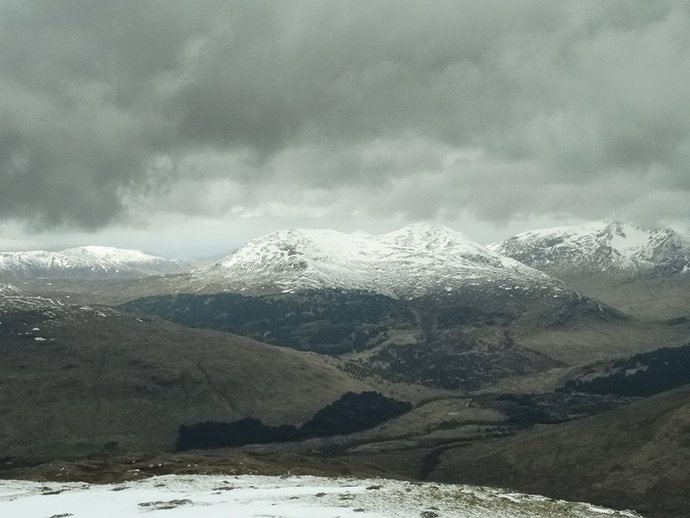 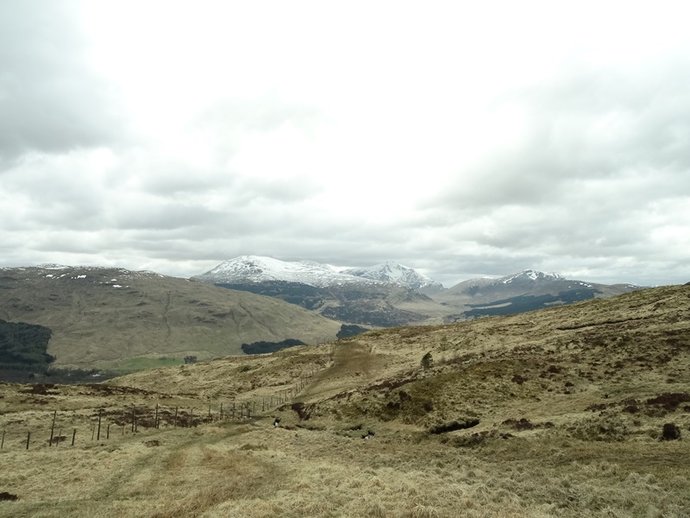 Cruach Ardrain again, looks to be a lot of snow over there.

The B.B.C. Countryfile forecast for the week ahead has just told us the good weather favours the south of the U.K. lets hope its wrong and we get a bit of the good stuff as well.

Winter is here to stay a while linger.

I am a Countryfile addict too, hope the weather improves for your trip

Nice one. I was on a couple of the Blackmount Munros on Saturday and was really taken aback by just how much deep fresh snow was on the summit ridges and slopes. It added a good couple of hours to my route as it was the kind of stuff that you spent half your time wallowing in rather than moving forward!

Typical, the cloud lifting as you come down the hill

. Let’s hope you get better weather for the rest of your holiday!