route.gpx Open full screen  NB: Walkhighlands is not responsible for the accuracy of gpx files in users posts

Usual start point at Dalrigh, we walked along the track to the farm at Cononish then cut off and headed for the mine. About 1/2km from the mine we headed NW up the slopes, then W for the final steep push on to the summit of the Corbett Beinn Churin. 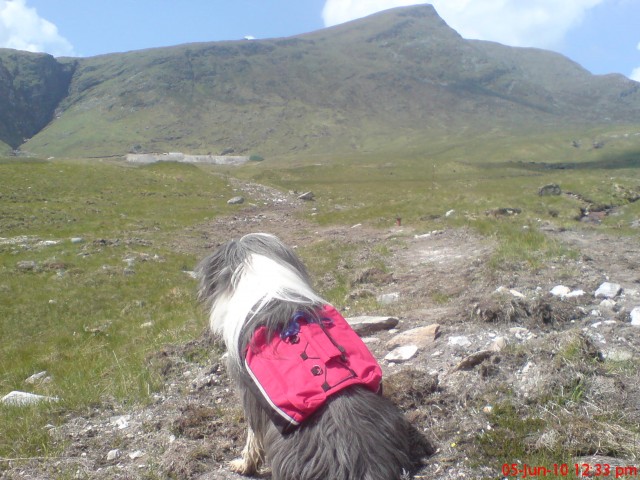 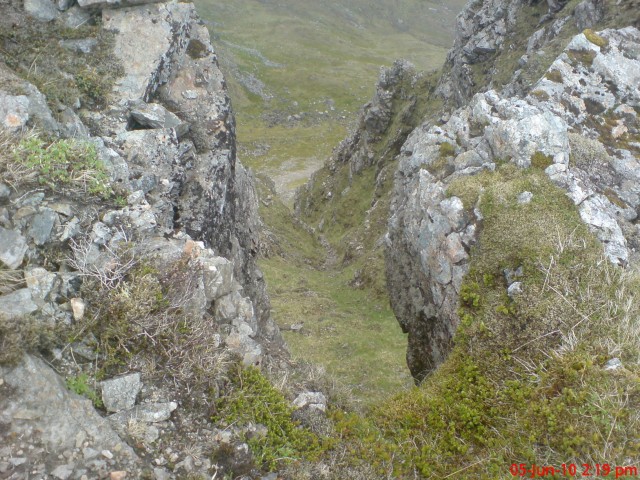 steep gully near the summit 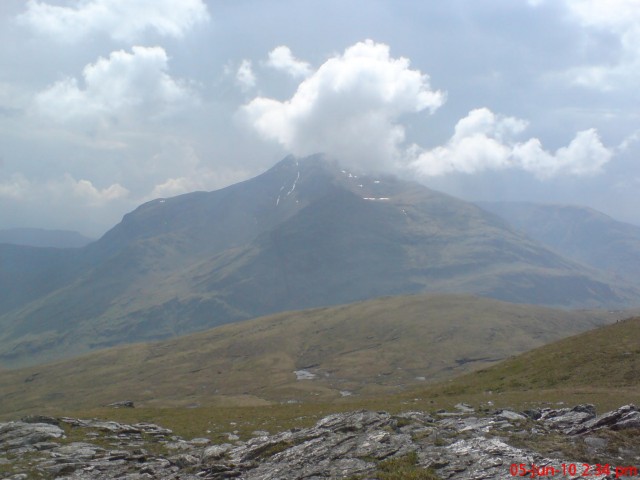 Beinn Lui from Beinn a Chruin

SW off the summit is 773 spot height, we skirted round there and down through some crags before crossing the Allt an Rund. From there we climbed hard and steep before eventually entering Coire Goathach and getting our first real views of Ben Lui. 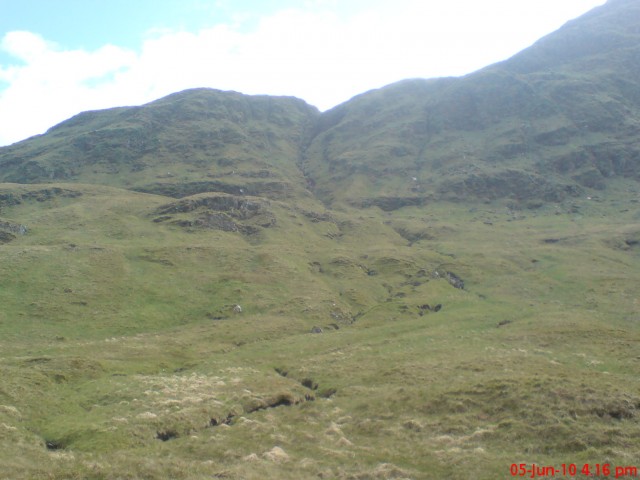 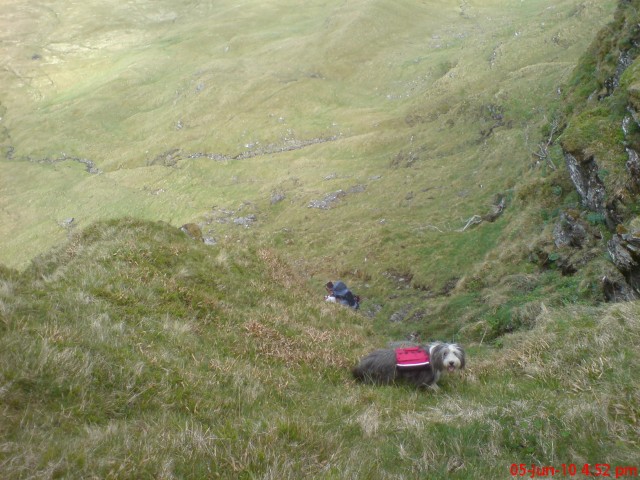 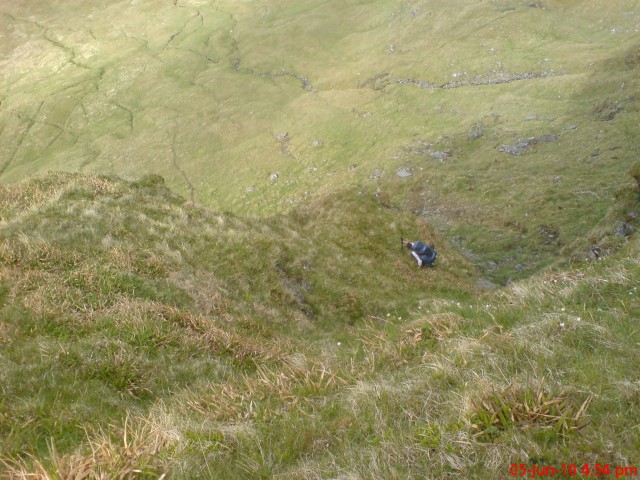 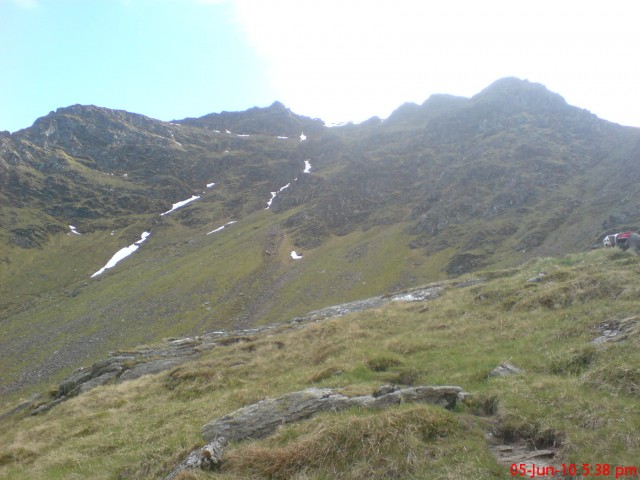 This is where the Hills beauty is exposed, with the semi circle of its dark steep Coire rising to the summit, still holding small pockets of the last of the winters/spring/summer! snow.
Soon we find the track that gets us up onto the ridge then on to the summit. 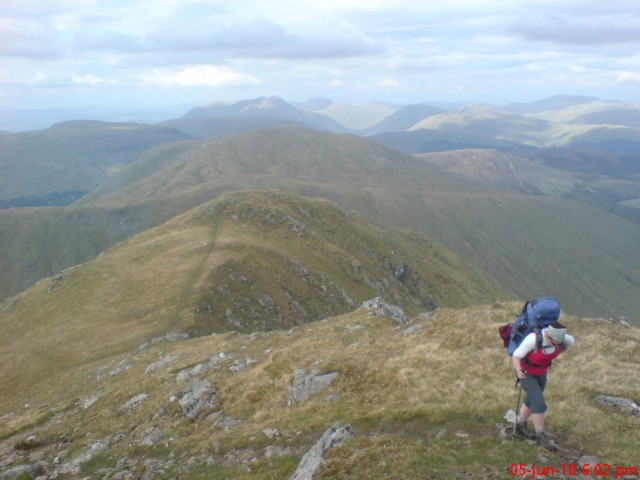 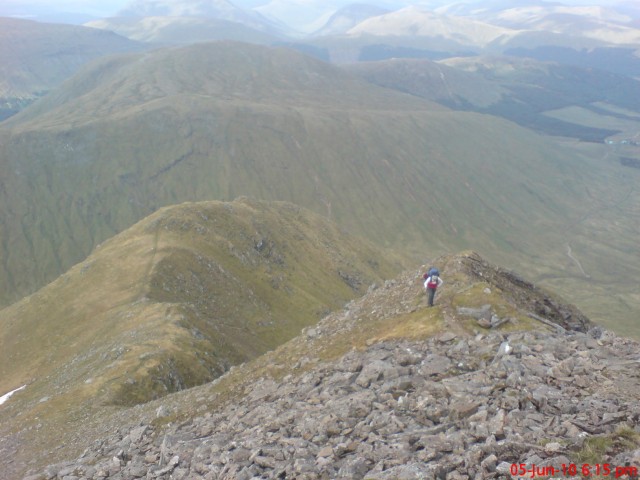 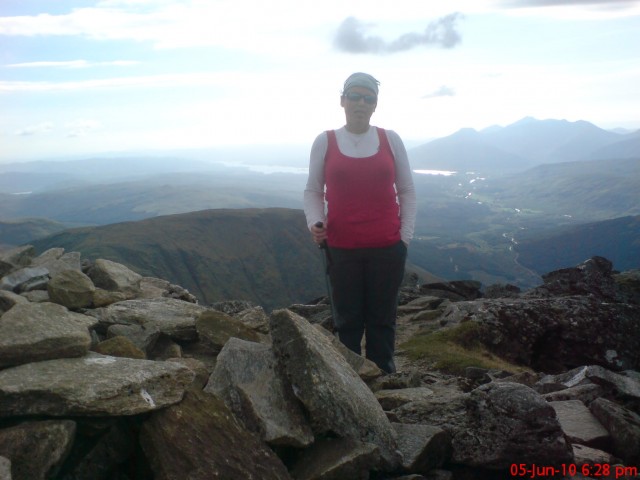 We now head for Beinn Chleibh at 913 m, that’s just what the feet ordered. (They were now aching) we are on the summit within the hour. Weather is still fine so we decide to horse on and try to reach the Graham Meall Nan Gabhar, this was where we planned to camp over night and it now looked like we were bang on target.

We head SW, then we get our first glimpse of Meall Nan Gabhar… what a surprise for a wee hill, standing there all on its own with its NE side facing us. There really was not an easy approach up this steep face; there were several weak spots. But nothing easy. We pick our route while descending Beinn Chleibh, just N of the 743 summit, not the easiest, put it sure did look fun. 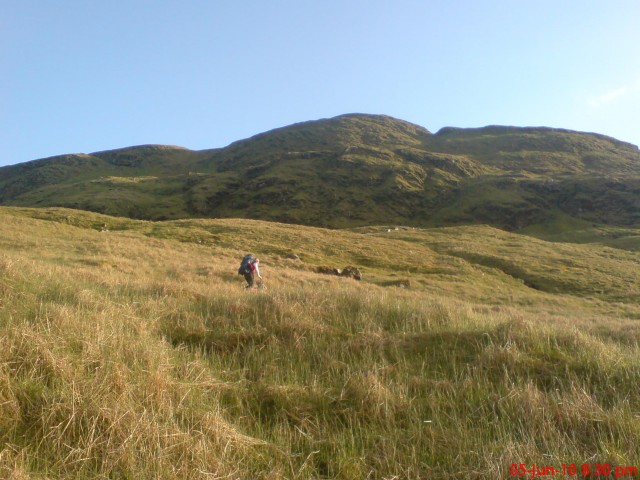 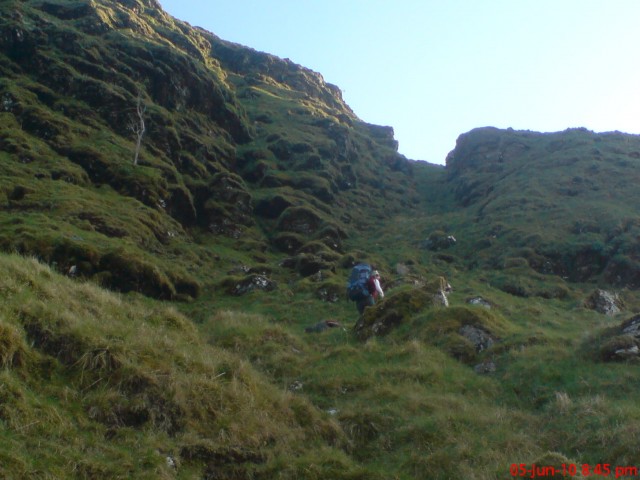 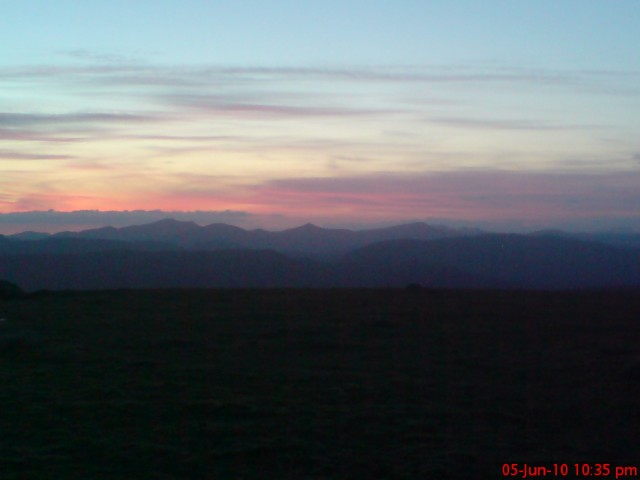 For me this turned out to be the surprise of the weekend. From the first views when descending Beinn Chleibh, when making the steep climb to the summit, the perfect High level pitch, sun set views, sun rise views and finally the views looking back when we left in the morning. What a great wee hill this is. 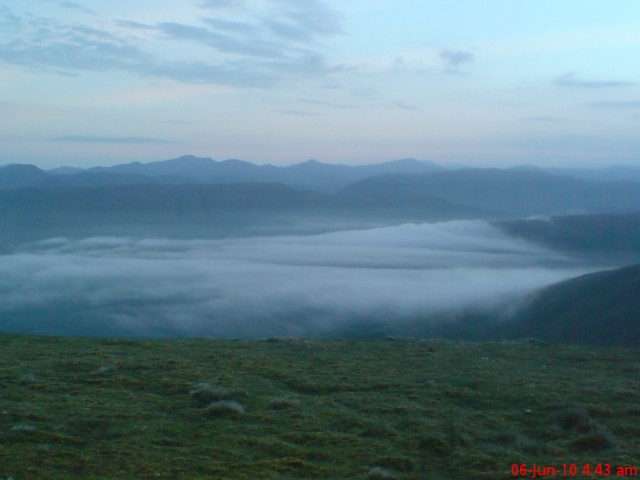 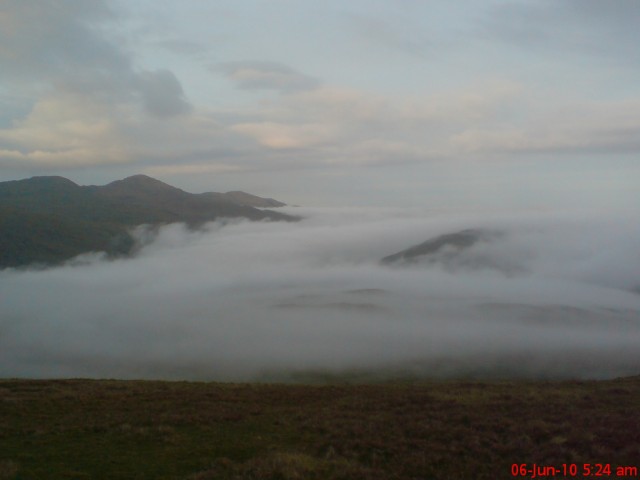 Camping gear packed we traverse the ridge and descend off the hill and are now heading for the Bealach at the head of Coire Laoigh, from here we join the path and head for the summit of Ben Oss.

We found this pretty tough, our feet were aching real bad, I was even getting the first sign of blisters appearing on my feet, and Julie was moaning about having to carry big packs on long hikes…. Mmmmmm

Unfortunately the weather was very poor compared to yesterday. There was very little rain, but the views, they were crap at times. 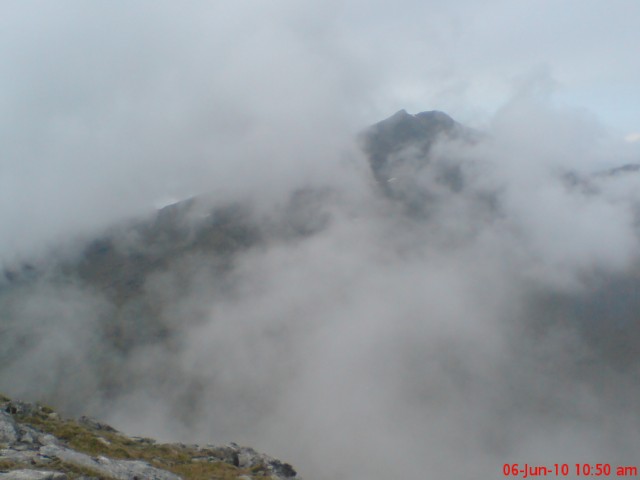 It took us a while to reach Ben Oss from the Graham in the morning; our pace had slowed somewhat since the day before. But now that we were here, and the mist had come in again we decided to move on at our snails pace to our final hill
Beinn Dubhchraig. Thankfully this looked not to bad at all. We simply horseshoed round Coire Garbh then up the steep meandering path that would eventually see us on to the summit. 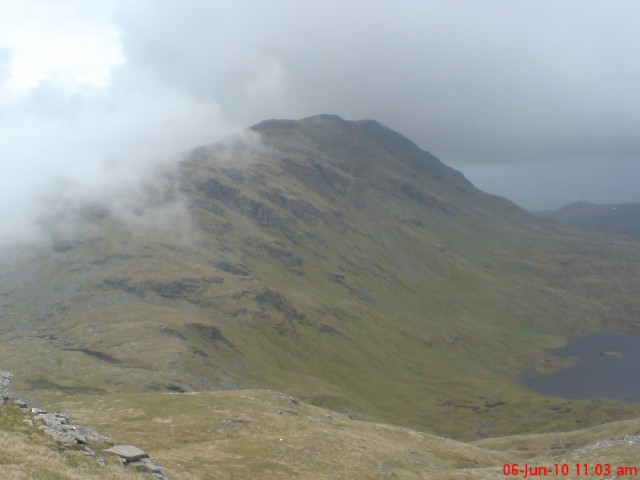 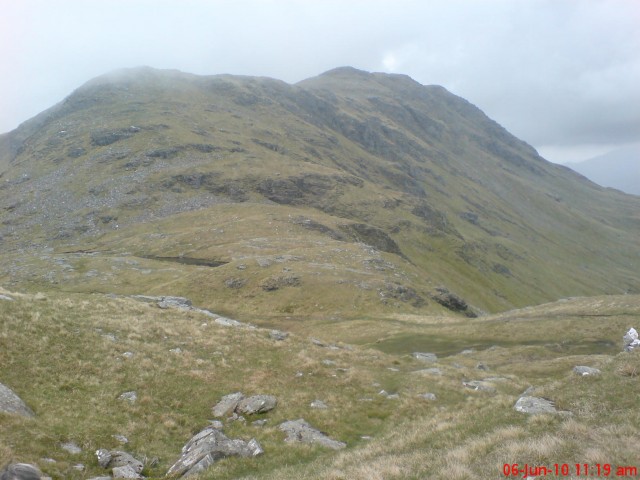 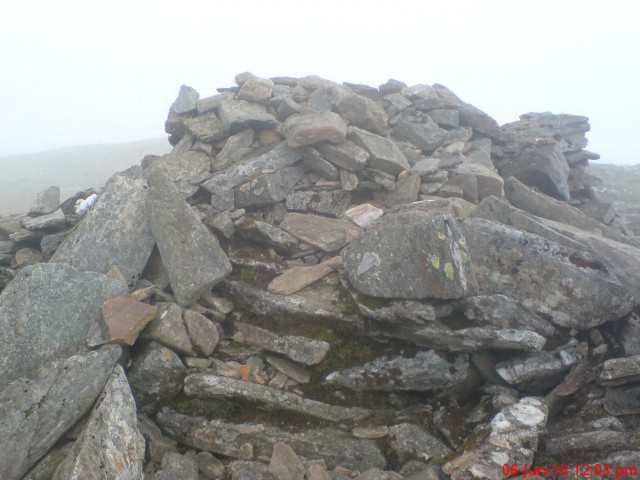 We meant to take the N ridge off the hill but I ended up dropping into the Coire, and by the time I had realised, well I never had the energy or the strength to get my self up onto the higher ridge so decided to follow the Allt Coire Dubhchraig to the edge of the woods, and carry on through the forest walk and emerging on the track. Leaving only a short distance to go before reaching the car.

PS…
If you get the chance to climb the Graham Meall Nan Gabhar please do,I cant recommend it enough.

Some nice steep bits up Beinn a Chruin and Meall Nan Gabhar.Thats quite a long walk but broken up nicely with a high camp. Looks like were inventing new ways to do these hills. I think Julie should be handing you some of her pack to carry though

Is it my imagination or is that a huge tent?

That looks a grand trip Dave... bit tiring with the tent

You've hardly got your breath back since the last big walkabout

Don't worry about the lady carrying the tent folks....I've got the feeling that young Wilson is being gently broken in for this task in the near future

he looks quite comfortable with his wee pannier strapped on to his back....his own food supplies?

i thought it would be good for the dog to do his fair share Gaffr. i also thought if he could carry the water, tent , sleeping bags etc....etc.. what a boost that would be.

But most of the above mentioned is the wifes job......

......... no point in stressing the dog he has been getting dtressed enough recently.