This was a much anticipated walk which had been a long time in the planning. With the exception of a day up Cairn Gorm on Glenmore Lodge's winter skills course, and a couple of wanders in the Pentlands, it had been a long 7 months since our last outing of 2014. I'd spent a long time browsing trip reports, planning walks and dreaming of summer. Finally the day was here!

So, the morning dawned. We were in the queue at the gate to the glen just before 9am, and concern number one was overcome. There were only around 10 cars there, so we could definitely get in.

At exactly 9am, the gate was opened and the gatekeeper began issuing permits. With two words - '7pm. Potholes.' - we were free to enter the glen. 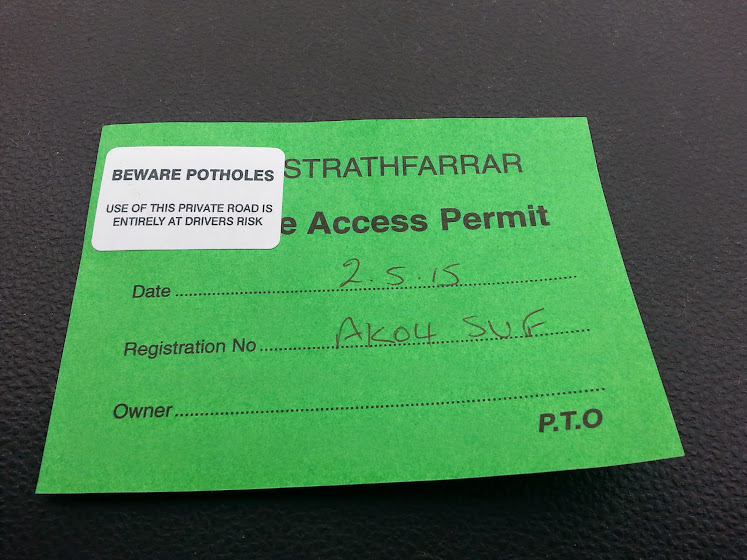 As we started driving down the road, I took my first look at our newly purchased OS map... and realised that the start of the glen was on another sheet

After working it out we were soon booted up and ready to go. We started off up the grassy track, which winds uphill straight away. Shortly it levels out, and meanders across boggy land to the bottom of the grassy spur leading to the ridge. I could see quite a lot of snow on the way in, particularly on Sgurr a'Choire Ghlais, and given our lack of crampons and ice-axes (2 May!), I was a bit apprehensive, especially since I'd spotted that most of the other people we'd seen were fully kitted out for winter.

Looking up to the ridge: 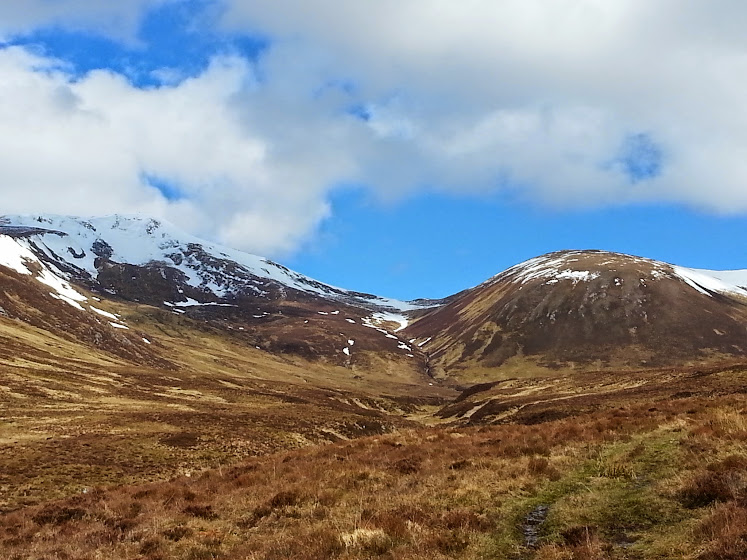 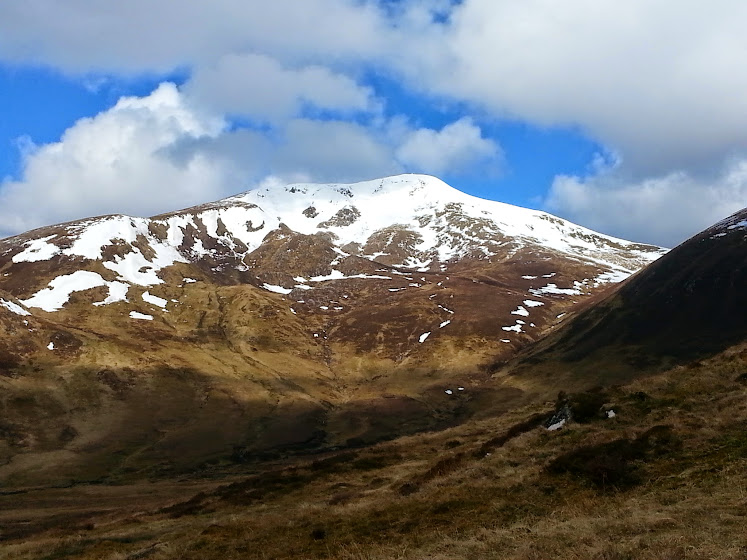 The climb up onto the ridge isn't too bad, and from there the summit was in sight. We negotiated a few patches of snow and had bagged our first Munro of the day after 2 hours and 15 minutes of walking, which meant we were on track to get out on time, according to the various reports I'd read. 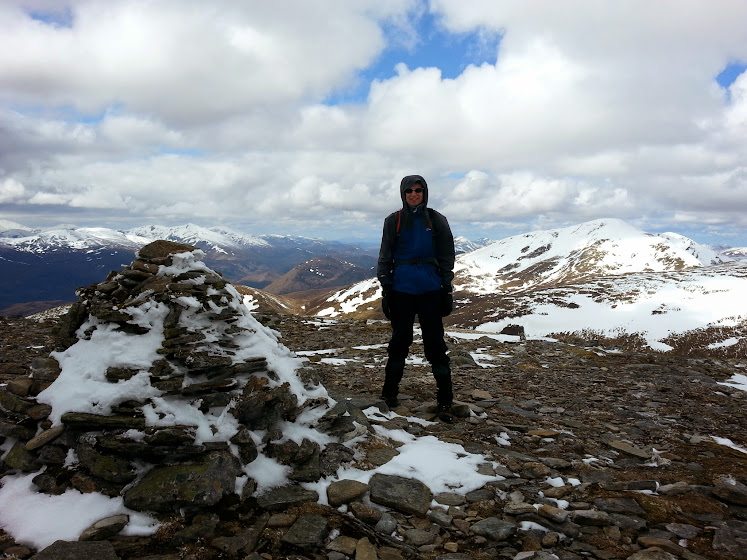 It was pretty windy so we didn't hang around, but stopped for a quick bite near the bottom of the bealach out of the wind. Sadly didn't get the benefit of the spongy moss ridge due to the snow. We were soon on the up again and reached summit number two. It was a bit bouldery around the top, but thankfully there were footprints to follow so no need to risk broken ankles! 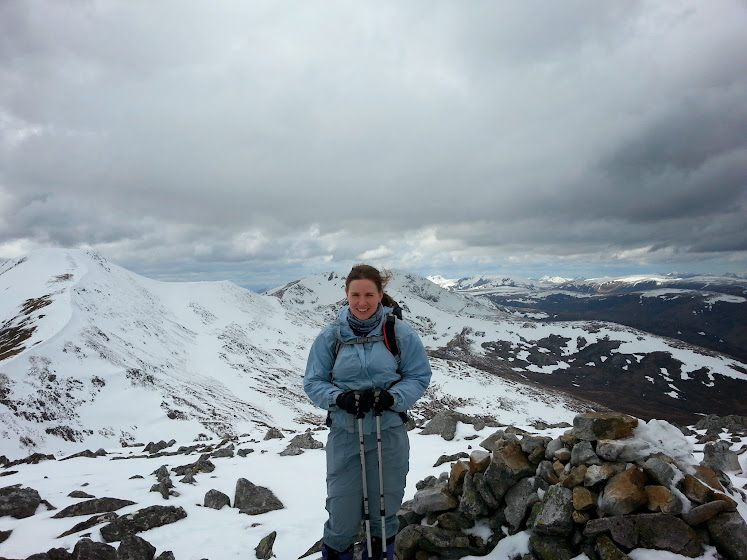 And now it got interesting. Sgurr a'Choire Ghlais is clearly much more dramatic than the first two lumps, and the whole ridge was covered in snow. Still, I reasoned, there were at least five people on the hill before us, none of whom had retraced their steps, so onwards and upwards.

Ridge to Sgurr a' Choire Ghlais: 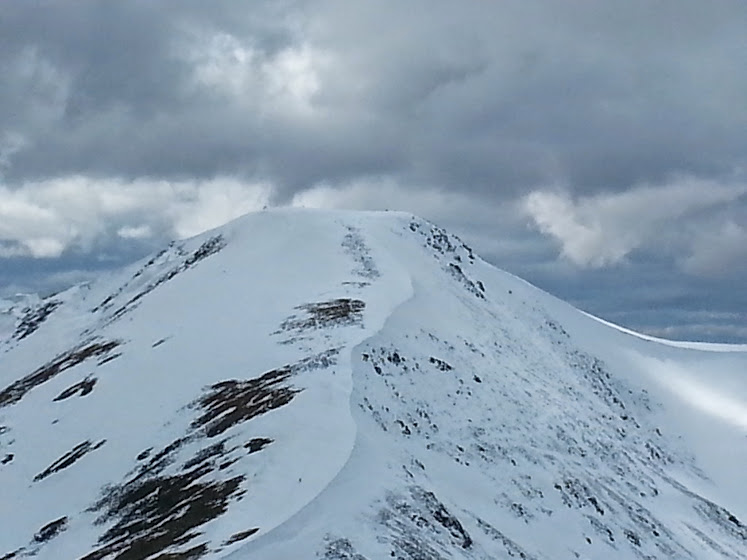 Climbing up that ridge was actually so much fun! The snow was soft, and we were able to follow footprints the whole way up. We were thankful for our poles (a new addition to this year's kit, already highly recommended and a bargainous £3 each from Go Outdoors) which gave a bit of extra stability. It was amazing how much of a distraction it was concentrating on where to put your feet, and it felt like we were at the top in no time. As the summit trig point came into view, the sun emerged from behind a cloud and lit up the world! The snow across the summit shimmered beautifully in the sun, and all around, 360 degrees of snow - capped mountains

Trekking across the summit: 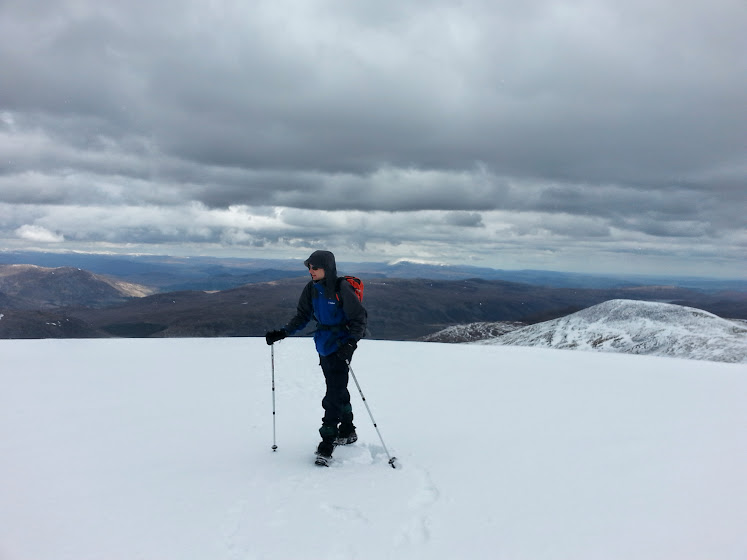 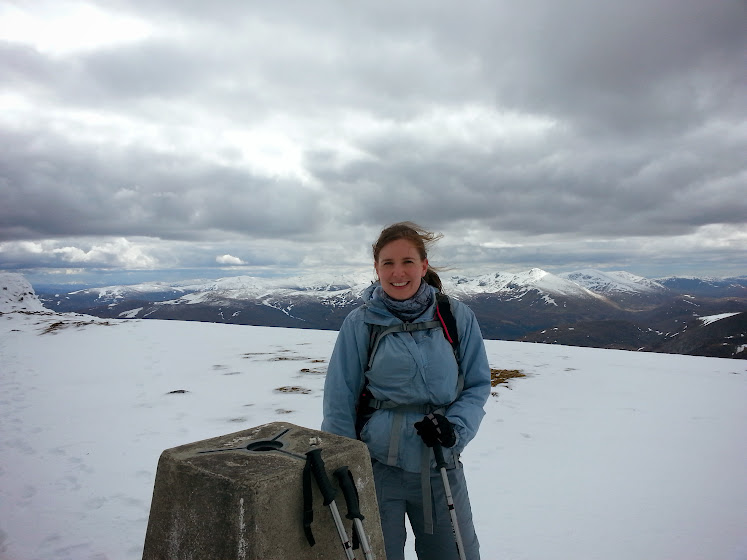 Tried to take a panorama but cold hands made it a bit squint:

In the spirit of true baggers we dutifully visited the trig point and both cairns, just to be sure. Off the summit, out of the wind, we stopped for another quick refuel then pushed on for number four. We traversed just below Creag Ghorm a' Bhealaich, as time was not going to permit a diversion up there today, and reached the final summit, Sgurr Fhuar-thuill, ten minutes ahead of schedule. 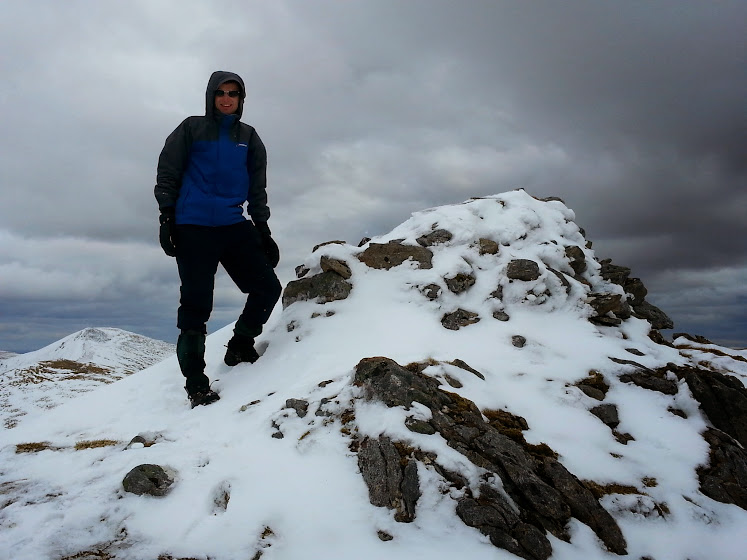 So we had three hours to get off the hill and out of the glen. Should've been fine. There's a clear stalker's path from the bealach down to Loch Toll a' Mhuic.

Looking down to the Loch: 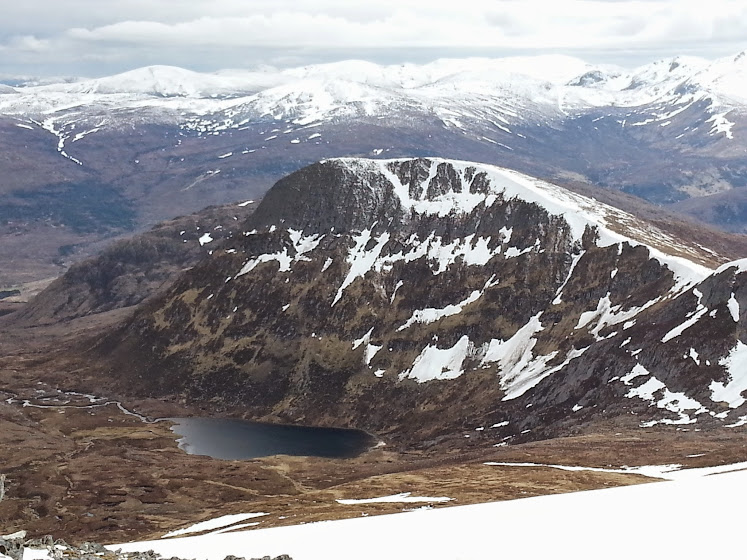 But due to the snow it was slow, slippery going. Also it was traversing across towards the headwall of the corrie, which had some impressive cornices and looked like an avalanche risk worth avoiding! So we decided to cut our losses and head straight down. Unfortunately this meant we lost the path and didn't pick it up again until down by the loch, after a slow stumble through a mixture of heather and snow. Time to pick up the pace!

From the loch onwards the path steadily improves into a track and we started the power-walk, pausing only briefly to admire some nice waterfalls (no time for photos by this point though)! We got back to the road ten minutes behind schedule, and my hope that there might still be a car parked at that end was shattered. So on with the 6k trek back to the car... And then...! We can only have walked for about a minute when a car drove up behind us and two lovely ladies offered us a lift - such relief! They had been up Maoile Lunndaidh (I think). If you're reading this thank you SO much, and enjoy the last one!

As we drove up that stretch of road it felt like quite a distance in the car, so I was so glad not to be power-walking it. Kindly dropped back at our car we had plenty time to sort ourselves out and get out of the glen before curfew time.

Turned out to be a great start to the season, albeit not quite summer weather, but four munros in the bag on a stunning day out 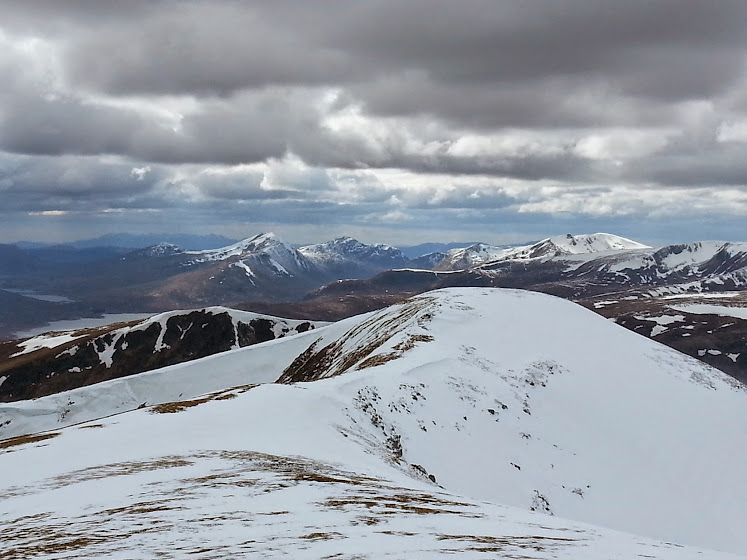 Great first report! I look forward to your next ones.

That would be a fair old walk if you are car 26, must bear that in mind when I get to do these.

Silverhill wrote:Great first report! I look forward to your next ones.

That would be a fair old walk if you are car 26, must bear that in mind when I get to do these.

Thanks! The ladies who gave us a lift told us they took bikes when they did it for the road section -in retrospect a good idea!

The exit time always adds a slight frisson of fear about annoying the lady at the gate! Well done for getting them all done with the added snow factor.

So you met the gatekeeper !

Found her very sour myself

Nice. I'm looking forward to doing this walk but I didn't know about the road and gate. Glad you included that. How far is the parking area from the gate?

What's with this snow? The middle of May last year was almost totally clear of snow.

teaandpies wrote: How far is the parking area from the gate?

If you're starting from Sgurr Rhuaidhe side, which is nearest the gate, it's about a 30 minute drive, although could be faster if you don't mind risking your car on the potholes!

We done this last Friday and it took us 10 hrs in no snow .