Today we'll "Elect" to be on a mountain.

Today we'll "Elect" to be on a mountain.


Today we fancied a short trip whatever the weather and escape the election coverage so opted for Meall nan Tarmichan.
The weather wasn't going to be too bad apart from snow showers which aren't a problem and high winds which we are getting a bit fed up of. We decided to do the munro and then go onto Meall Garbh and have a look at the rest of the ridge and then decide how far to go depending on the wind and weather.

Drove to the Lawers car park, paid the £2 parking fee, got the gear on and, promptly discovered I'd left the camera back at the caravan we're staying at, damn!, ah, hang on, I've got the phone, oh s--t!, not much charge, will have to limit the piccy's, better than now't I suppose. Experimenting with the phone, never taken photos with it before now. towards our intended from the car park.

We set off along the well engineered path taking us to Meall nan Tarmichan (signposted)!? and simply followed it. There are a couple of steep bits along the way but nothing taxing and the views to the mountains around us were getting better and better, Beinn Ghlas, Ben Lawers and Meall Corranaich, there was still a lot of snow about and there were patches over the path higher up. Views on the way to the minor summit. We arrived at the 923m minor summit in good time and could see the final steep pull up, covered in snow but could see no problem. In the dip between the minor summit and the start of the final climb we met a really nice old fella from Aberfeldy and had a natter, we discovered he was 79 yrs old, knew the mountain like the back of his hand, had climbed all the munros, corbetts and grahams, had climbed most of the 4000m peaks in Europe and had climbed in S.America and the Canadian rockies so he knew a thing or two about mountains.
We bid him farewell and set off up the steep bit, we went over a mixture of grassy slopes and snow patches to do the bulk of the climb and regained the path as it became less steep. We arrived at the summit cairn and promtly walked on looking at Meall Garbh thinking that was the summit, it looked higher to me, so no Denise at the summit photo this time, silly mistake but we did touch the cairn.

From the summit the path over to Meall Garbh is obvious even though a lot of it was under snow, the clouds started to descend at this point and a rather fierce snow shower hit us and hid the view for part of the walk over. Meall Garbh after the snow 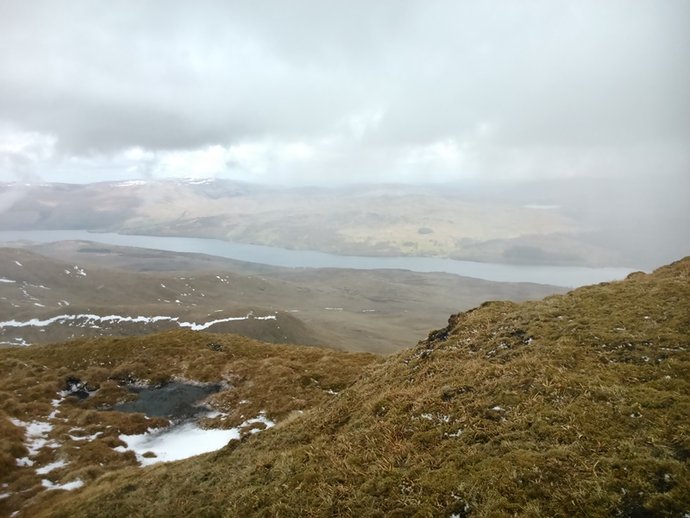 View down to loch Tay.

We arrived on Meall Garbh with the snow beginning to abate but the wind was cold, very cold. I got the phone out again and took the "summit" shot of Denise just as the clouds cleared, good timing. Denise on Meall Garbh with Meall nan Tarmichan behind. The way forward, we stopped at Meall Garbh so will return to finish this section. Looking towards the distant Cairngorms.

We hung around on Meall Garbh for a while debating wether to continue, meanwhile our friend arrived and warned us there was a tricky bit further on and said it could pose problems in these conditions and said he was heading off the hill via the south ridge from Meall Garbh, so we decided to keep him company on the descent and come back to finish the ridge at a later date.

We started our descent, initially over snow but soon picked up a good path that took us down to the good track leading back to the car park.
We soon arrived at the car, said our goodbye's, I didn't get his name, pity because he was a really interesting guy to talk to.
Another good day out, we enjoyed it and the weather behaved, great stuff.

that looks a decent day. you must go back for the rest of the ridge, its the best bit.
wish i could be like your pal when i reach 79..

Tarmachan Ridge looks good even with less snow on it - we had crampons/ice axes conditions up there in March and like you, didn't go to the last top. Have to revisit the ridge someday