The Tarmachan Ridge is an airy and enjoyable walk, offering a narrow but straightforward ridgeline with great views and just enough exposure to keep you on your toes. Although Meall nan Tarmachan is the only munro on the walk, its actually Meall Garbh, classified as a subsidiary top, which is by far the more interesting mountain - it would be a real shame to climb Tarmachan without taking it in.

Its as whole three months ago now, but on a sublime February day with bright blue skies and deep snow on the ground, Meall nan Tarmachan was to be the target for the day. The small road linking Loch Tay with Glen Lyon was looking a bit sketchy, so having parked at the top of the forestry the walk began on icy tarmac for around a kilometre and a half until reaching the first car park. Here the path cuts off to the west on a constructed surface, but beware as the OS maps of the area don't reflect this, and its not immediately obvious as to which path you might be on!

Crossing a track it's then onto open hillside, and it was onto crisp snowpack, which the crampons made light work of until the occasional patch of soft snow threw a spanner into the works! There were some fairly impressive raised footprints on this east face of the hillside which must have been laid down a good few days ago. Eventually the south ridge is gained upon reaching a fence line at around 700m, and this was followed all the way to the top at 923m, and after a brief descent it was a steep pull up deep snow to the summit of Meall Nan Tarmachan's summit. Once at the summit the views really opened up, particularly to the north west, where Ben Nevis was clearly visible across the snowcapped landscape. From here on the route got better and better, as it headed south west across the wide and rolling ridge towards Meall Garbh, with stunning views in all directions. Looking directly ahead the Crianlarich munros dominated the skyline beyond the sharp peak of Meall Garbh, up to which there was a final steep pull. 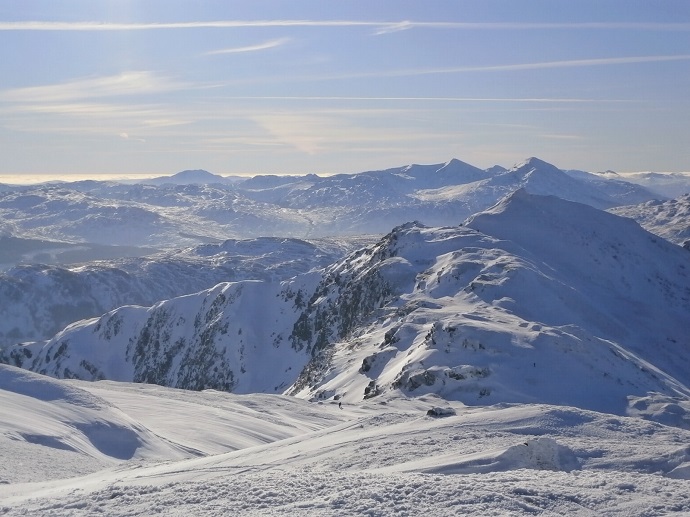 Meall Garbh and the Crianlarich hills behind Now the ridge really kicked in properly, and it was great fun crossing the narrow spine which projects westwards. Its narrow enough to feel exposed, and under these snow conditions it was a thrilling walk. Sadly it doesn't last for very long, and the route soon drops down a steep west facing slope. Under snow conditions probably better to head northwards to skirt round the blind drop here - I didn't, and scared myself descending a steep icy gully! From here more rolling ridge led over Beinn nan Eachan, and at this point I decided that as the sun was already fairly low in the sky, I would skip the final climb onto Creag na Caillich and drop back towards the disused quarry then skirt along the track for around three km back to the road. As I walked back two planes crossed, creating a saltire against the blue sky. wow, that last shot of the Saltire sky!!

Excellent photos of what looks like a superb day. One (of many!) that I haven't done but always wanted to.

This was my first ever ridge walk so it's great to see it again in winter colours. Lovely photos!