Winter is back - Ben Alder & Ben Bheoil May 2nd

Winter is back - Ben Alder & Ben Bheoil May 2nd


Another trip up from London for a weekend of Munro bagging. And a weekend of firsts for me. First bike and hike, first winter scramble and first wild camping (although we ended up taking our chances in the bothy – but a first to sleep in a bothy!)
The plan was to do Ben Alder and Ben Bheoil on Saturday, camp at the bothy then do the Aonach Beag 4 on Sunday. Unfortunately the weather wasn’t on our side so Sunday didn’t pan out. It had snowed quite a bit during the night and there was almost no visibility of the tops of Aonach Beag on Sunday morning. So the report is just on the Saturday’s adventures.
We left Edinburgh at 7:40 which made for a pleasant change – don’t usually have such a civilised start on these weekends. We then met up with a few others at Dalwhinnie station and got all of our bikes and gear ready. Not too much faffing later we were on the road just after 10. The sun was shining at this point, and not very bike fit Laura was puffing and panting pretty early into the ride along Loch Ericht. Carrying all my food, winter gear & camping gear on my back certainly added to the difficulty factor of the ride. This was a lesson in conditioning too, and I am clearly not ‘bike fit’. The cycle is not difficult and the views were lovely and I can only imagine that without the pack it would have been really enjoyable.
Anyway, we made good progress along the track to the bothy. We cut off to the left a bit before the end of the track and avoided the ‘shoogly bridge’ that others have encountered and the ride across that way was pretty easy. I have to say though, an hour and a quarter with all the gear on my shoulders was about my limit. Was very happy to dump the bike and offload some stuff! Our little gang cycling along the Loch side Our objective ahead - Ben Alder me - still smiling and enjoying the journey! Almost at the bothy

Sadly the sun left us at about the time we started the walk up to Ben Alder and the weather was to get gradually worse as the day went on.
I had read the WH report for these 2 and also some of the reports that others had posted. None of it had quite prepared me for what now stood ahead – a rocky, snow covered prow with no visible paths up round the side or back… I have never approached a walk with this level of dread or apprehension before. I checked with the others about which way up we’d be going and wasn’t happy to hear ‘right up the front’. I am relatively new to winter walking and to scrambling so the unexpected combination of both really wasn’t making me feel very good. There's only 1 way - straight up the front!

Nevertheless, I plodded on. The fresh snow was pretty deep and the going wasn’t easy.
Then we started the scramble. It was OK to a point. Then it levelled out and I took a quick breather and stopped for a photo. But what lay ahead looked awful to me and I was quite nervous. The wind was picking up too which wasn’t helping as the snow/sleet was now slapping us in the face and it was hard to concentrate.
I was a bit out of my comfort zone and told the others. They rightly pointed out that at this point, turning and down climbing what we had just come up was probably more dangerous / scary than just going on. I fully agreed and put on a brave face and did the rest. In hindsight, it definitely did look worse than it was, and there was only about 3 ‘hairy’ moments and ultimately I am pretty pleased with myself for conquering something that I really didn’t think I could do. Looking back at the ridge we'd come up A little breather for me here - needed it! 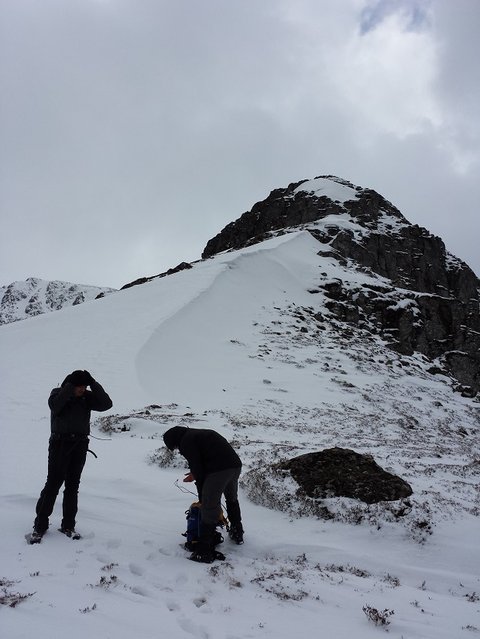 The point of no return...


The going was really good after this walking wise but the weather grew worse though and once up on the ridge the wind really picked up and it was goggle weather. We were all being pretty buffeted about by the wind, which combined with the deep snow, made it a bit of a slog to the first summit of the day. We stopped for a quick bite to eat just before the summit, taking advantage of an altogether too short lull in the wind speed. Weather took a turn for the worse after lunch :-( There wasn’t much hanging about at the summit (or anywhere else for that matter!), the walk down the to the bealach was the most fun / easiest part of the day as the knee deep snow meant we could run down or do bum slides – both better on the knees than the usual descents.

Then it was only a couple of hundred meters more of ascent up to the summit of Ben Bheoil. Out of the corner of your eye you see a cairn at one point and think ‘hooray – almost there’, but that’s not it! It’s not much further though. From the summit it’s an easy walk over the ridge and then down a pretty gentle descent till you pick up the path just above the stream below. Then locate your bike and head down to the bothy.
We took the risk and ignored the spray paint outside and decided to sleep in the bothy. According to the visitors book, others had stayed up until a couple of weeks prior and a fellow walker we met on the hill had settled in to have his dinner there… so far no signs of illness. home sweet home for the night :-)

A bit of a cold night and some snow fall and we woke up to less than ideal conditions for attempting the Aonach Beag 4 so packed up and headed back to Dalwhinnie to attempt a plan B. That’s another story!!!

Well done for conquering the Long Leachas with snow on it!

I love the picture of your group on the Alder summit plateau, it looks arctic!

Enjoyed reading that, love the 'arctic' shot of the group

When I did that walk a couple of years ago in July, I was struggling due to the heat, not a breath of wind or a cloud in the sky