Ben Cruachan became one of those must do mountains as soon as we saw it from Beinn a' Chochuill, it looked impressive from a far and we became determined to give it a try during our holiday, when the weather was favourable towards the end of our week we hoped, with fingers tightly crossed, they'd be right for a change.

Friday dawned and the forecasters were on the button, few clouds and plenty of sunshine and it was set to stay like this all day, just the job.
Thinking the makeshift layby by the power station would be taken we planned to park in the official one just down the road, as a last minute thought I drove past it just to have a look and found there was one spot not taken in the makeshift one and promptly took it, looks like Ben Cruachan was meant to happen to day, good weather, convenient parking spot, sorted.

The first section above the railway is steep and travels through beech trees but the higher we got the less dense it becomes the view opens up over Loch Awe.Then, further up, the dam appears with Ben Cruachan behind. 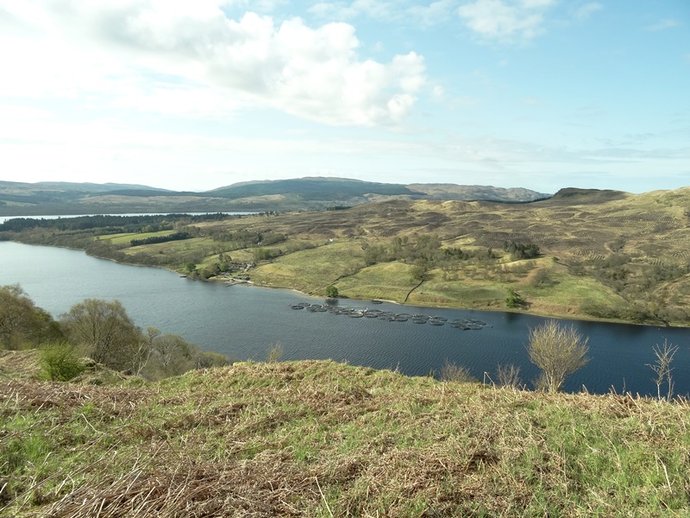 Loch Awe and fish farm from the hillside above the visitor centre. Cruachan Dam and Ben Cruachan behind.

We followed the track to the dam, climbed the metal ladder and then took the track along side the Cruachan Reservoir as far as the outlet marked on the map and then started up the path towards Coire Dearg. Looks a long way to the bealach but not bad at all.

This section up to Bealach an Lochain looks steep but is a steady climb and we were soon up, we just had the snow to go over and managed this by moving from one bouldery bit to another over sections of snow. At the Bealach the climb up Cruachan didn't look too bad but the actual summit can't be seen until higher up, Meall Cuanail is behind you and starts to look quite impressive the higher we got. On the summit the views are superb, there was quite a bit of snow around blown into an interesting fin shape, we could see Loch Etive and Stob Dearg to the west and the route ahead and that looked impressive. On the summit of Ben Cruachan. 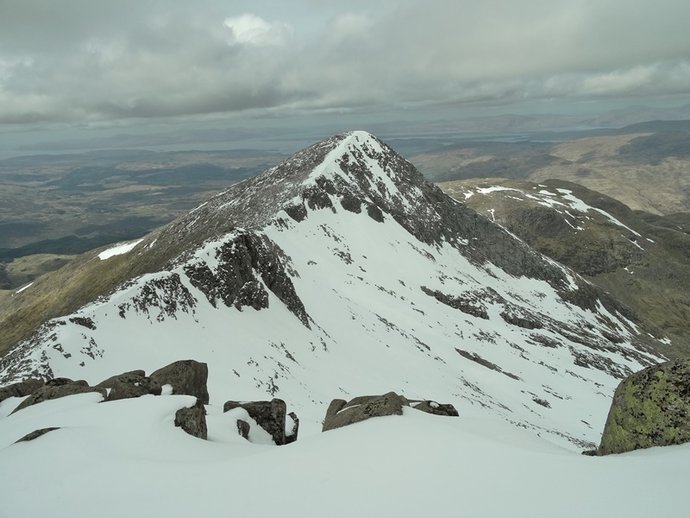 We set off from the summit over snow, came to a small rocky step with snow banking up against the rock at the bottom forcing us out onto a large sloping snowfield which needed a bit of care travelling over but it was good fun and kept us alert. Looking back to the summit from the snow slope.

Next were the slabs, they presented no problem at all and by now we were really enjoying this day out and the scale of the mountain around us was just brilliant. Down into Glen Noe. Looking back to Ben Cruachan, a bit of a strange angle, looks like a Stigs helmet.

The walk over to Drochaid Ghlas is a fine ridgy walk mainly on a good but rocky path, I went to the top of D/Ghlas to take a couple of photos while Denise had a bite to eat at the cairn at the start of the rocky down bit into the bealach before the climb onto Stob Daimh. This section looks further than it is and we were soon on the summit of munro No:2, looking around us the views were intense, we could see Beinn a'Chochuill and Beinn Eunaich our Monday walk, The Glen Etive munros, the Black Mount, Ben Nevis, Glen Coe, Mamores, Ben More etc, etc, etc too many to list and also the way we'd come and that looked a long way. Denise on Stob Daimh, Ben Cruachan behind her. 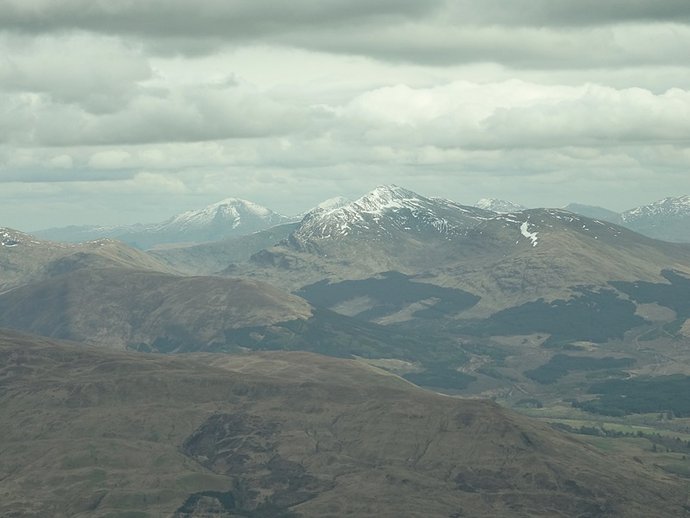 Over to Ben More away in the distance, Ben Lui and Beinn a'Chleibh in the middle distance. We left the summit and headed for Stob Garbh the last top of the walk and again from this top the view was superb. Ben Cruachan and our walk from the top Stob Garbh Denise taking in the views 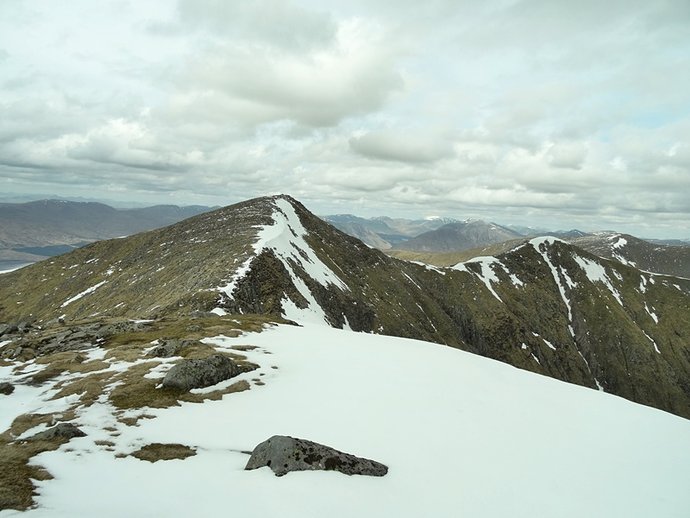 Looking back to Stob Daimh. Then the long walk back began. On the way down from Stob Garbh we saw the remnants of a mahoosive cornice, all along this walk we saw loads of built up snow and wondered what it must be like in full on winter conditions, pretty impressive, I think!. The remnants of a large cornice below Stob Garbh, that'll take time to melt away.

The walk from Stob Garbh back to the dam is over easy but wet hillside, the hardest bit on tired legs is the section from the dam back to the road, not difficult, but over steepish rocky ground so care is needed. A last look at the Dam from the service track, it looks to blend in quite well from this angle.

We had a fantastic time on Ben Cruachan one we'd recommend to all who want to do it. "Mighty Ben Cruachan" is a very apt description for a truly magnificent mountain.

Re: Ben Cruachan & Stob Daimh, living up to expectation.

One of my favs is Cruachan

Great day out you had there, well done