This one was for Allan

This one was for Allan


A text from my ex-army mate Andy during the week led to this walk. Andy now works in Tanzania so time at home is special for us but usually involves lots of booze and tomfoolery. Andy has only really just come to terms with the Iraq war and out of all the guys I know he more than most has the troubles of a soldier on his mind. Back in 2006 he witnessed his good mate (whom I never had the pleasure of meeting) Allan take a head shot from a sniper while he was changing the communications on a police station roof top in Al Amarah, Iraq. Allan died instantly and seeing the pictures of Allan’s coffin being carried down Aberdeen’s Union Street nearly brought me to tears. Lance Corporal Allan Stewart Douglas of the Highlanders was only 22 and his birthday was May the 2nd, he would just have turned 32. This one was for Allan.
Parked up in the lay by a couple of km’s East of the Cluanie inn and set off toward the track that takes you to Glen Affric. We cut off the track almost instantly and began the relentlessly steep climb up the side of Fuaran Mor Chluainidh. 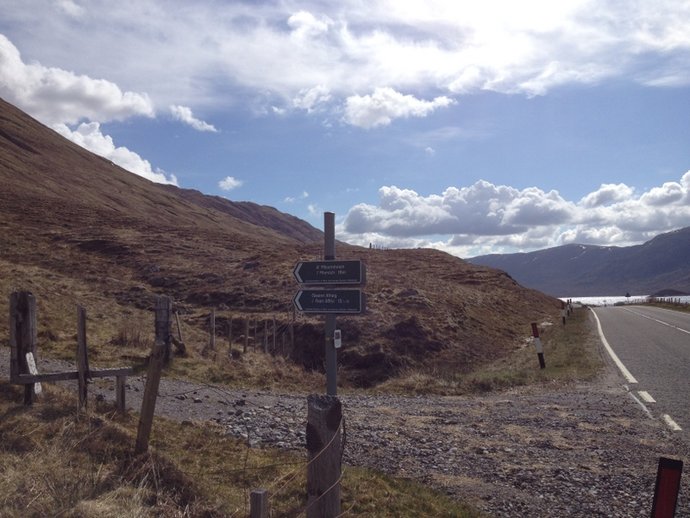 The track to Glen Affric 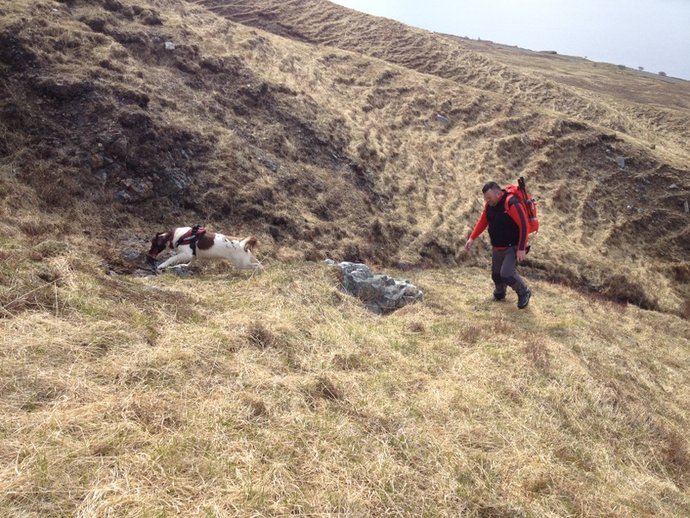 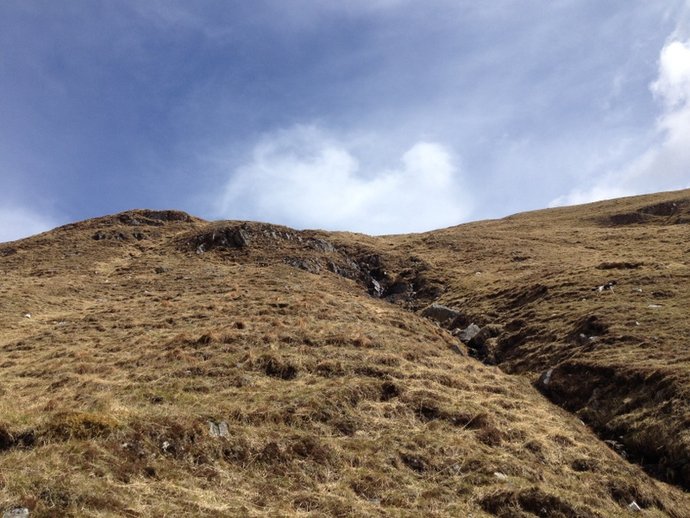 Andy struggled to start with as his fitness is not what it was, he has completed lots of courses at Glenmore Lodge so he loves the hills but work keeps him away for great periods. Behind us there was a couple and their wee Terrier, they soon caught up with Andy but stopped for lunch. The views were fantastic over to the SGR and also the rest of Kintail, the Ben even made a cloud free appearance. 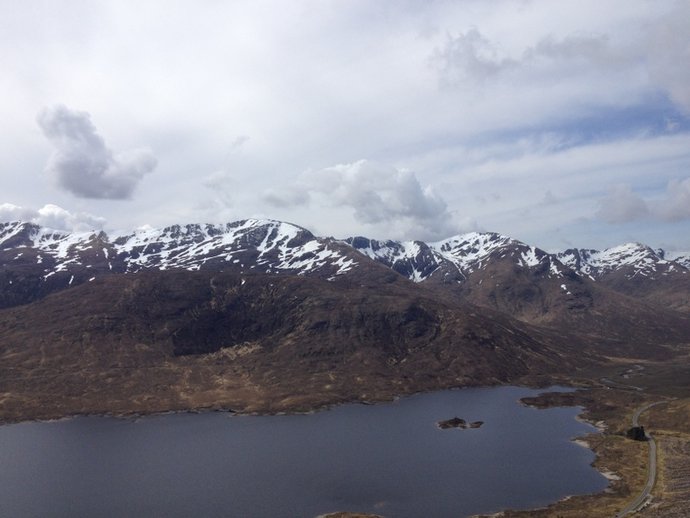 Looking over to South Glenshiel Ridge 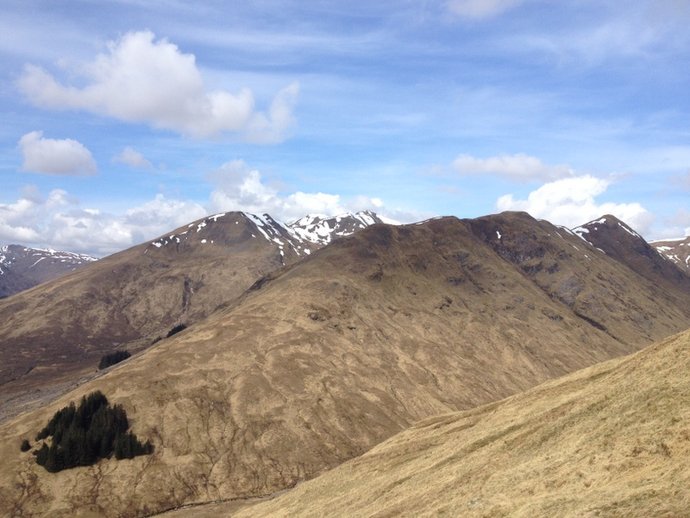 The Corbett Am Bathach and Brother ridge behind 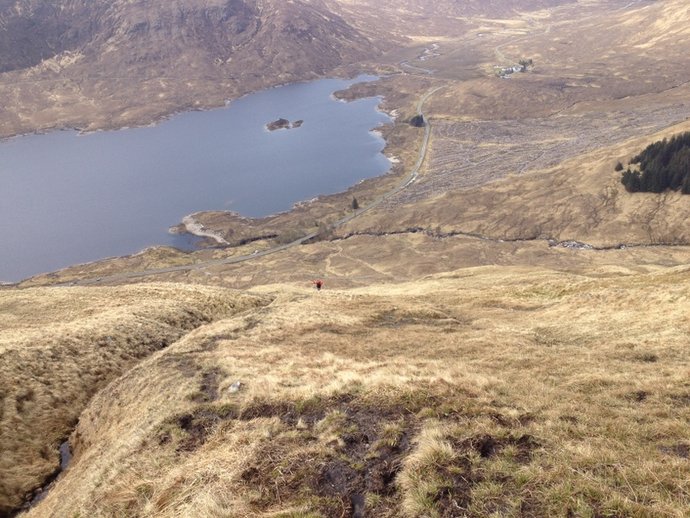 Back down to the road and Andy 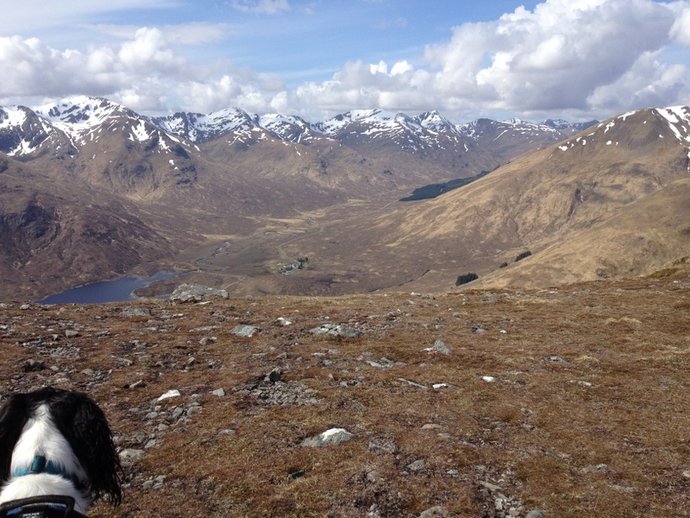 A dogs eye view of the SGR

Once up on the ridge to the summit I met a guy that was taking part in the TGO challenge, well played sir that’s some undertaking. 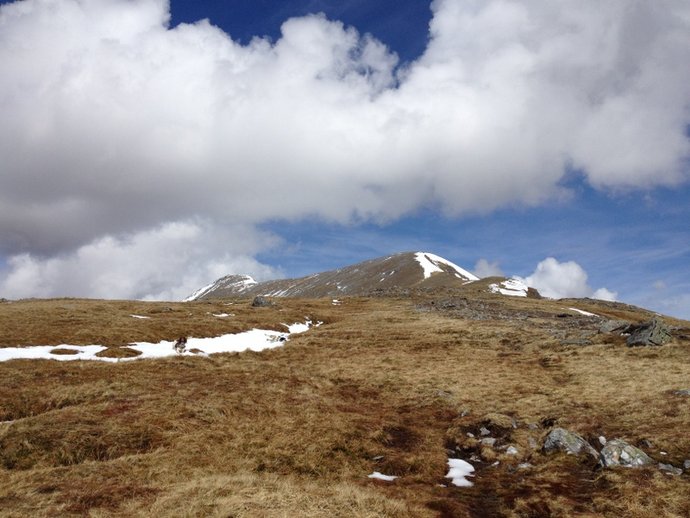 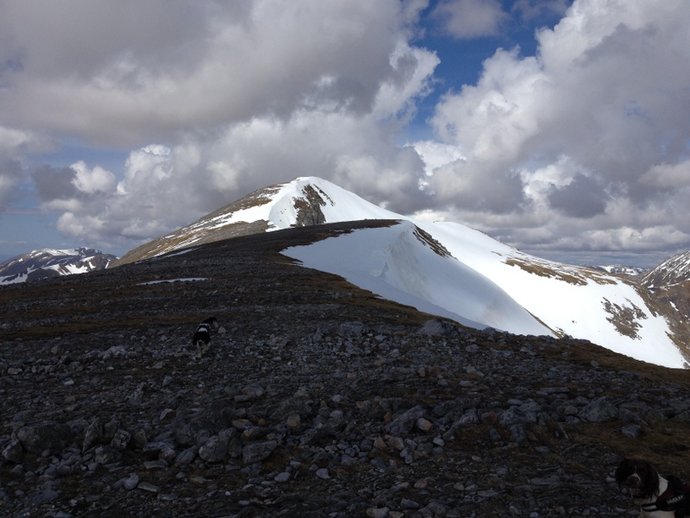 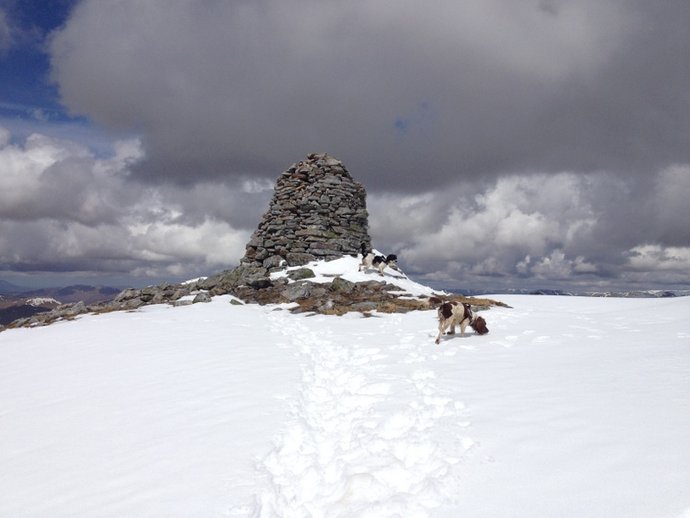 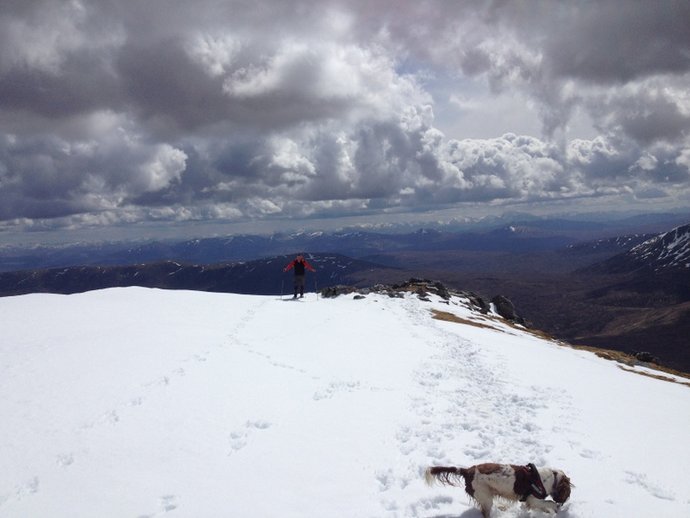 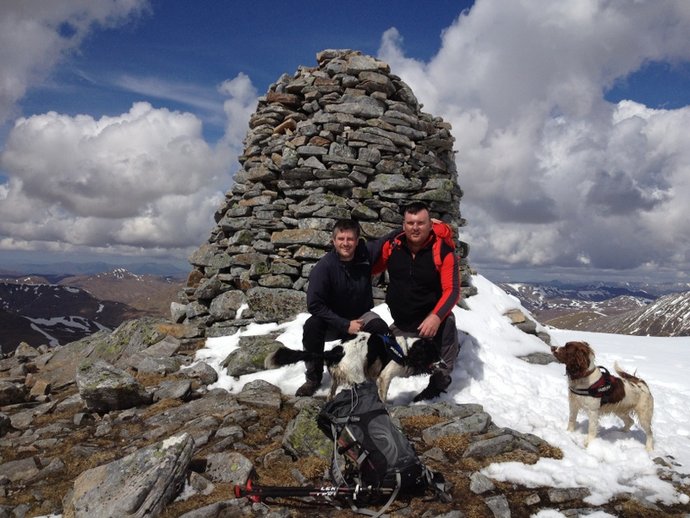 We replaced used energy with sandwiches and fruit and then made our way along the ridge to the second Munro. I had read that there were pinnacles to negotiate (Na Geurdain) on the way but there was a bypass path so the dogs would be ok. 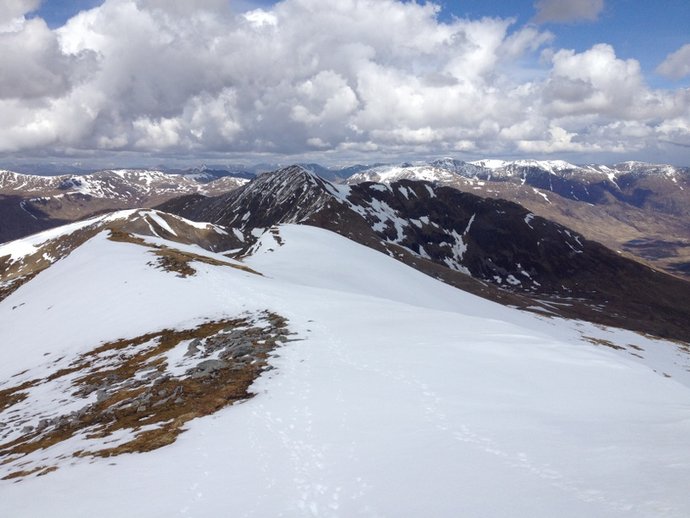 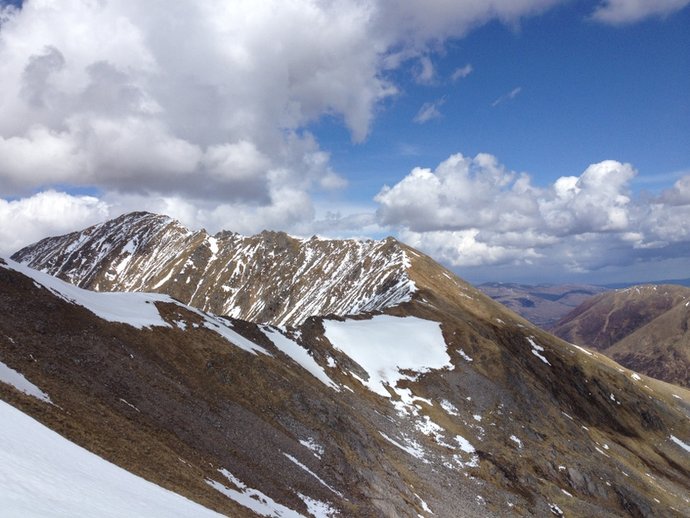 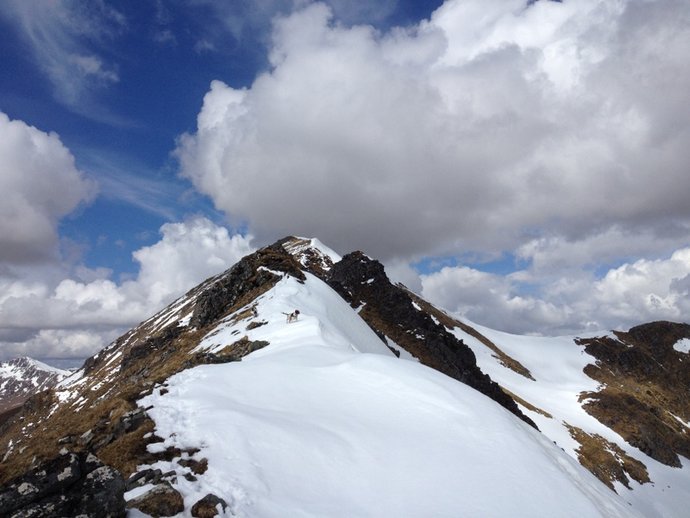 Once I got to the pinnacles there was no sign of a bypass path, the snow had covered all traces. We therefore made our own way down to the right and traversed along a snow field to the end of the path which I made out. The dogs did just fine and soon we were waiting on Andy and the other couple and their dog to get across. Andy coming over the rock pinnacle 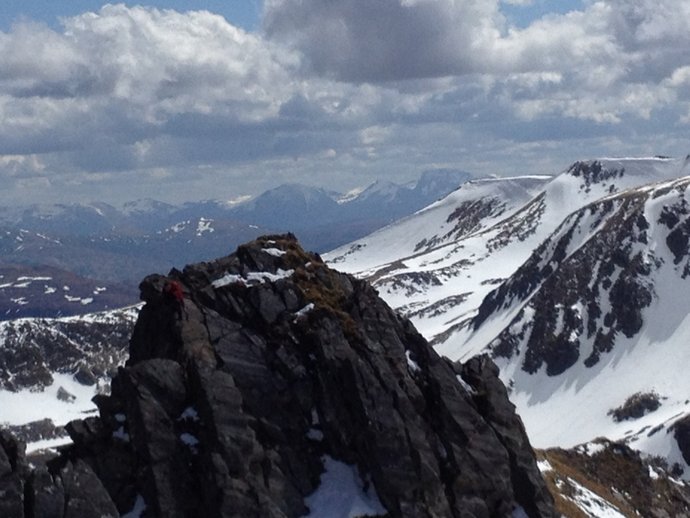 I pushed on to the summit as I did not want the dogs mucking around here, I met a guy and his Collie dog there and we chatted a while. He decided not to negotiate the pinnacles and I decided I’d not go back that way either. He set off North and Andy made the summit and we stayed taking photos a while. 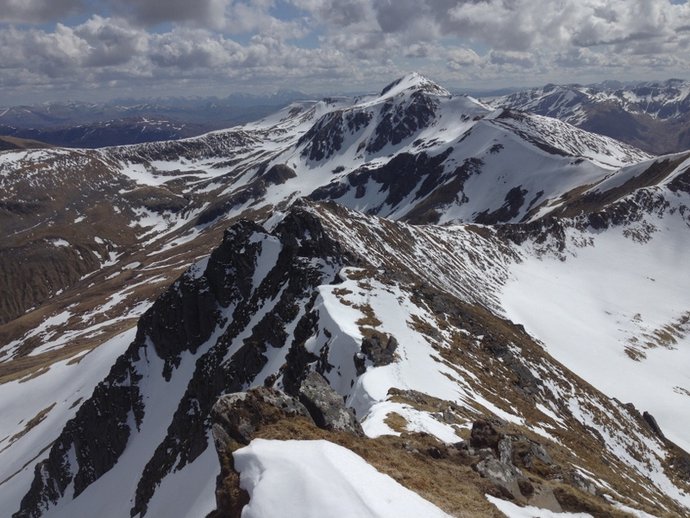 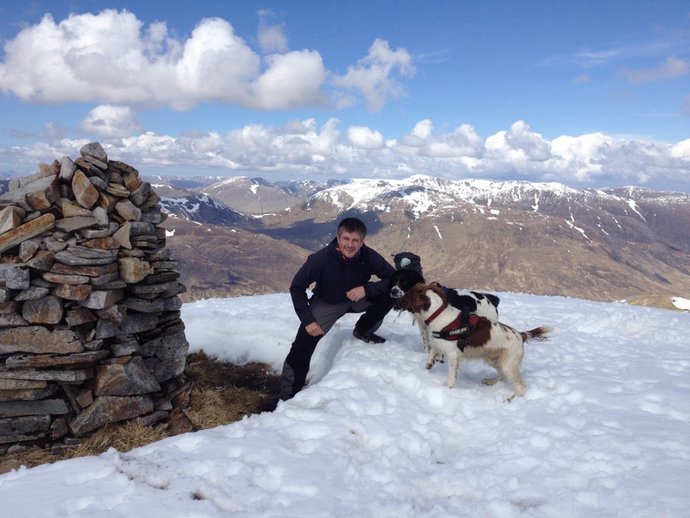 Me and dogs on summit 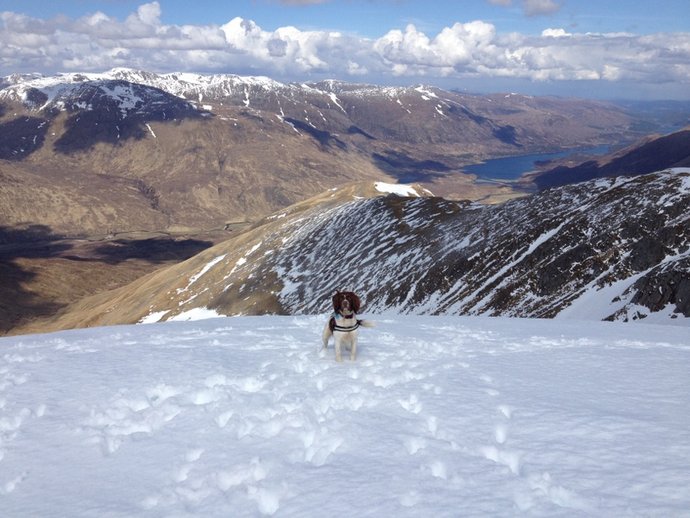 Roy with the Glen Affric backdrop

We followed the guy North before heading west down into the Glen on the steep grassy slopes, they were dry so no issues. Our descent back down into the valley We made the path which soon turns into a Landrover track and motored along bumping into another TGO wanderer. He had collected a 6 pointer stags Antler. Just before we made the road again we bumped into a guy that was back up looking for his GPS which he had lost a few weeks ago, hope he finds it. Once we made the road it was a short walk back to the layby. When we were driving back along the road I saw my dad’s car, it turns out he was up doing the three Munros East of the two we were doing, it’s a small world after all. We stopped in Inverness ‘right enuf/rubber bumper’ for a chippy tea and the evening was lovely, soon we were back to the Northern Lights of Old Aberdeen. Cracking day, I never asked but I’m sure Allan was in Andy’s thoughts, the hills seemed to be therapeutic for him.

Great report and pics and a really nice touch for Allan

Great report and photographs there Beaner, looks like a fantastic day on the hills

Another great report Matthew with some nice photos.
Its good that our soldiers are remembered, they put their lives on the line to make sure we continue to live the lives we're used to, a lovely private dedication, I hope Andy's memories ease with time. Thanks.

rockhopper wrote:A great day for it and a fitting way to bring back the memories - cheers

Scored with the weather and the views

kev_russ wrote:Great report and pics and a really nice touch for Allan

The Rodmiester wrote:Great report and photographs there Beaner, looks like a fantastic day on the hills

Cheers Rod, it was a good hill to do, if I'd been myself I may have gone for a longer trip but didn't want Andy collapsing on me, he'd be a big beast to help back

martin.h wrote:Another great report Matthew with some nice photos.
Its good that our soldiers are remembered, they put their lives on the line to make sure we continue to live the lives we're used to, a lovely private dedication, I hope Andy's memories ease with time. Thanks.

Thanks Marts, it's a lovely area, no long walk in's just climbing straight from the road

Cheers for your kind words

Superb report, Beaner. What a great way to remember a friend.

Great walk and a fitting tribute to a brave soldier.

Smashing report, and two great hills in a fantastic part of the country. Great dog pics as usual! The hills are great healers, I hope they were good for Andy. A fitting tribute to Allan - thanks for posting this it's good for us all to remember.

Always touching to remember those who are sadly not with us.

Great that you can support your mate this way. Days out on the hills are good for the soul.

Also, a handy report for me. I’m planning to do these two in a few weeks time. Good to know about the pinnacles and the bypass path.

A1 Beaner, hope your mate Andy manages to get plenty more days on the hills too.....Cheers Kenny