This is my first wee walk report. I love reading about other people experiences and i figured this was a good way to remember my own! I haven't done many munros but I am suitably obsessed. I would be out every day if I could. However, I have no idea how to navigate .. not a single clue. So I have always hill walked with one of my oldest and best friends Gary, who is adequately equipped with proper navigational skills. Unfortunately (for me) Gary has been insanely busy with work for a few months and completely unable to get out and about. Which means effectively so have I. Until...Ben Lomond! I spent a few days googling "easy munros" "munros with an obvious path" that I could at least tick off until I have my buddy back with me again. Anyway I convinced a work friend Keir to come with me as he seems "outdoorsy" and was really up for a day out of the city. ...Then two other boys from work wanted to join us as they were excited by the prospect of "Doing something outside of work besides drinking!"
After arranging to meet up with the guys my little sister dropped a bombshell by saying that she too would like to come. On a recent family outing I was walking ahead with my mum chatting, enjoying the sunshine and the sea breeze... we turn around and Francesca (the little sister) is perched on a rock looking utterly miserable holding her phone in the air trying to get wifi signal so she can message her boyfriend. Outdoorsy...not so much
So yeah, i was surprised to say the least. Foreseeing a moan/whinge fest about an hour into the slightest bit of rain/ or a steep bit... I made her solemnly swear (AKA.. a pinkie promise, very sacred) that we would both get to the summit no matter what, as her going back would mean me going back as I wouldn't have been able to leave her to walk back down herself( in true noble big sister style)

ANYWAAAy. So we arrived at Rowardennan Car Park on time...To get a phone call from the boys to tell us that they were running extremely late as they had got lost.. then stopped to eat sandwiches( a good start)

I felt slightly concerned when the boys arrived. Keir had completely forgotten his hiking boots "they are sitting right next to my door at home" (useful) so he was in wee sort of plimsole trainer thingys. Whereas jambo had converse trainers on and a wee hoodie( no jacket, hat or gloves). Which might be fine except there was heavy snow and hail and wind forecast which i didn't think boded well for their wee feet and jean clad legs. I could forsee some extremely soaking baltic boys.
Anyway we started the walk and it was really beautiful and quite warm although i could see big grey clouds rolling in and knew it wouldn't be long before we would need the waterproofs..

A hungover Jambo informs us that he had been out drinking mojitos all night on a date...and is feeling a bit pants.

A momentary pit stop for something to eat

Jeans are the absolute worst when its wet..as the boys were beginning to realise in the whiteout that began to descend.

I don't know why i love getting absolutely battered by the elements on mountains... but i sort of do.
After a while the boys began to have the inevitable "i can't feel my toes is this really worth it?" discussion... after deciding to push on for a bit the weather just got incrementally worse... Me and the wee sis were in full waterproofs by this point. Also as a side note, it is utterly impossible to look good in waterproof trousers. I know thats definitely not the point of them but seriously. Francesca had it worse as she had to borrow a pair of my dads which were huge and green and billowy. nice. 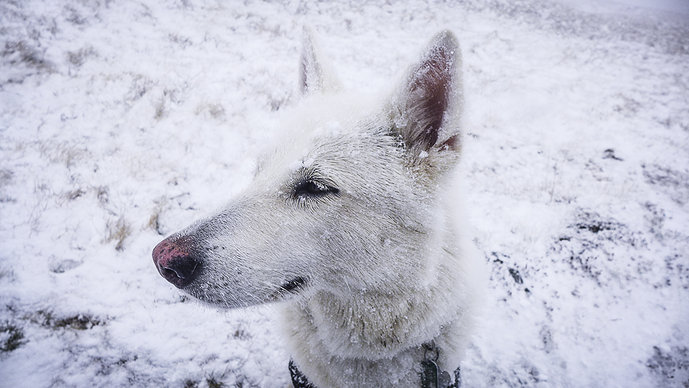 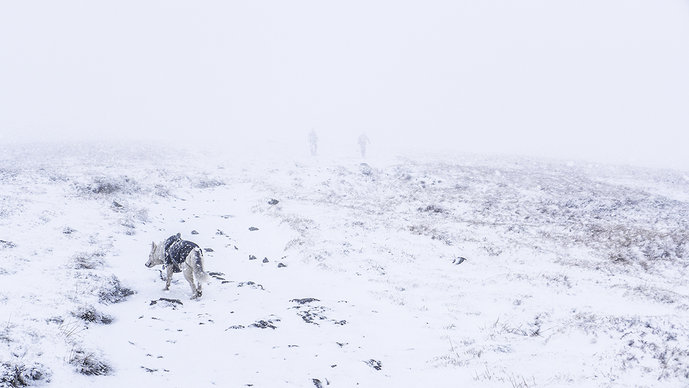 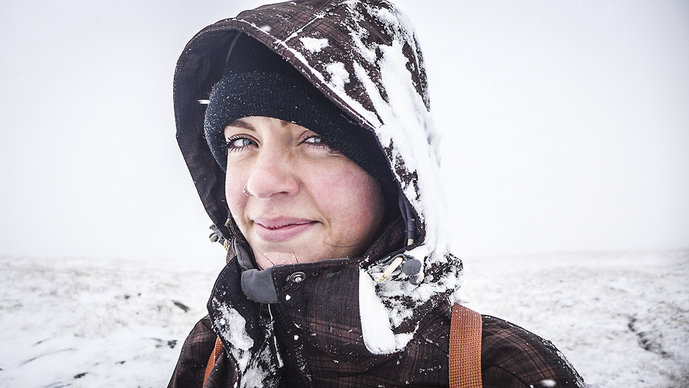 snowballs beginning to collect on the side of Frans head..

At this point the boys decided enough was enough. They wanted to head back down due to their various frozen extremities...with the promise of coming back another day when they were better equipped. Like a slightly evil slave master i reminded Francesca that we were going to carry on. We said bye to the guys and plodded on. As munros go apart from the conditions which were if i'm being honest slightly brutal (the hail was the stingiest i've ever felt smashing into my face) it seemed like a really easy walk. For a lot of it it barely felt like there was an incline.. It was only in the last hour or so that the path began to feel a wee bit steeper.

I was trying to be ultra positive and upbeat to stop Francesca thinking that coming out with me was the worst idea she had ever had. When it started to get a bit steep, we stopped for sandwiches and broke out the thermos. Hot soup whilst it is a bit of a pain to carry a big chunky thermos is SO worth it when its freezing and blowing a gale. Gives you such a lift to get a wee heat! 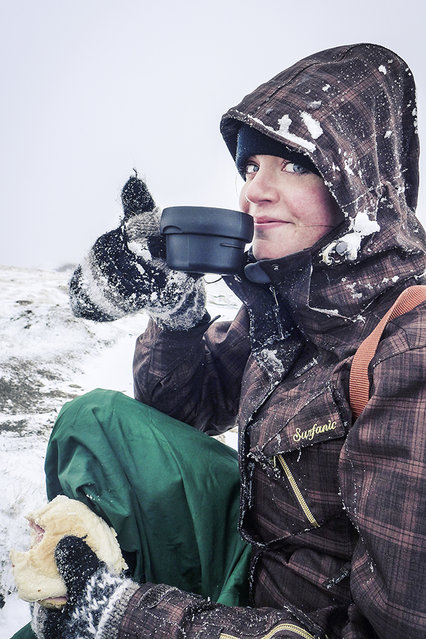 Francesca wrapped up and enjoying some soup

As we headed for the summit the clouds would momentarily lift to reveal the gorgeous views..which unfortunately the boys were now missing. 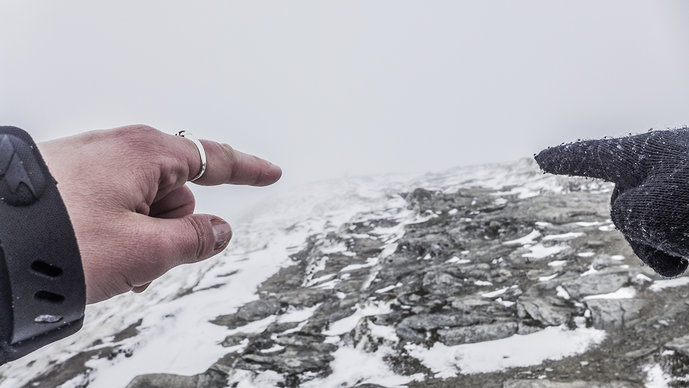 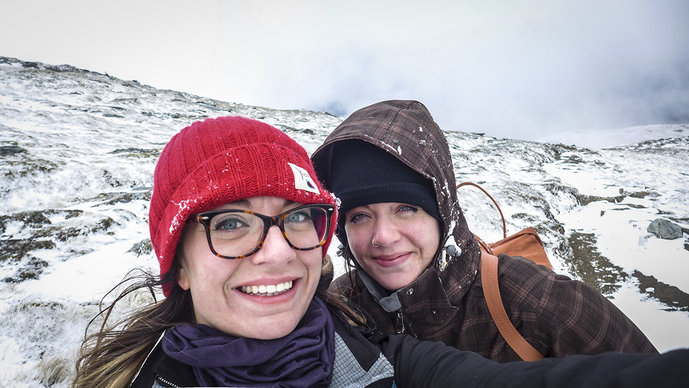 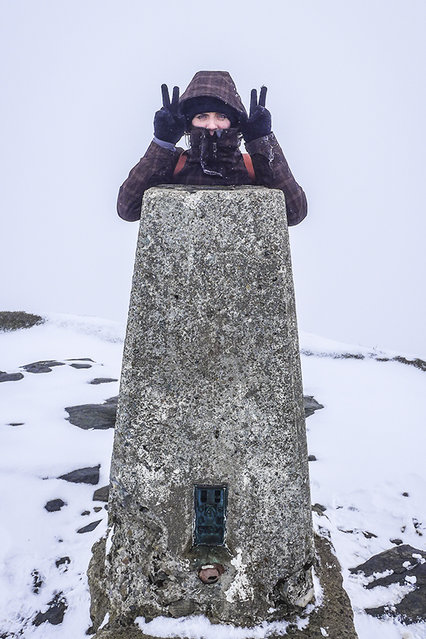 She did it!Frans first munro... My tenth! Finally in double figures!

After looking around a bit and having a quick coffee at the trig point Francesca turned to me and said "i actually feel quite proud of myself" sweet. No matter how bad the weather is or how little you can see from the top its always such an amazing feeling and sense of achievement getting to the summit. 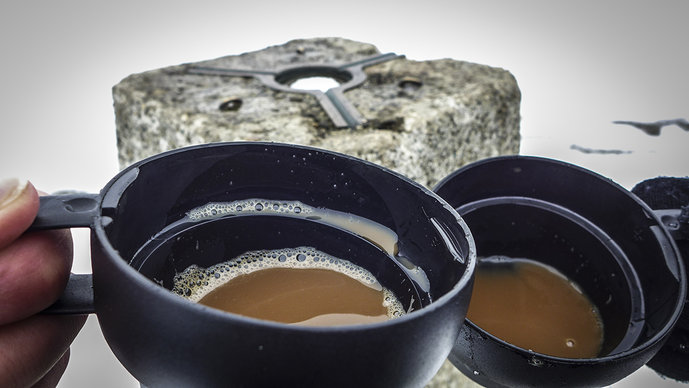 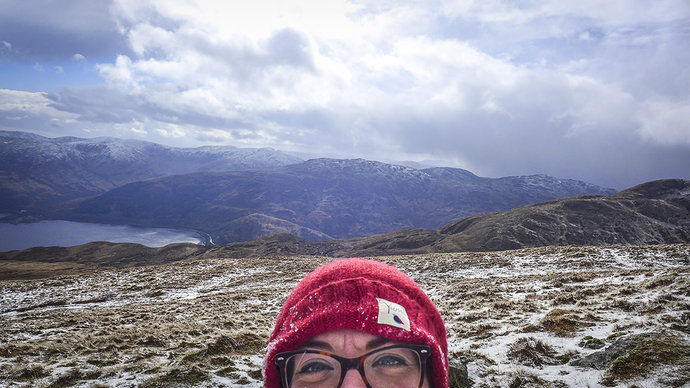 always worth it to be in scenery like this 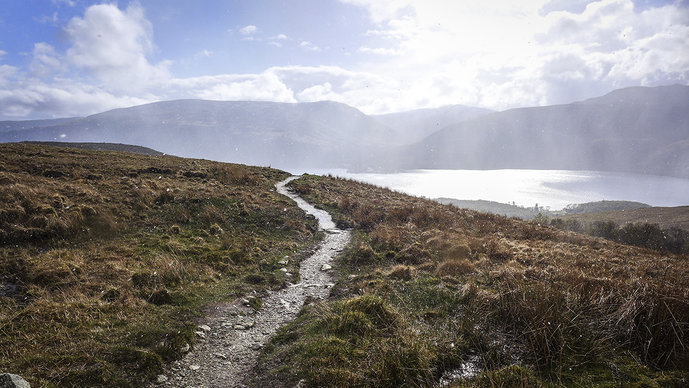 raining whilst the sun is shining...as usual scotland's 4 seasons in one day 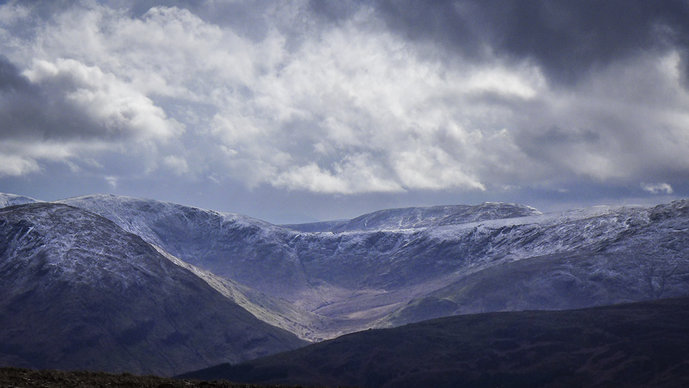 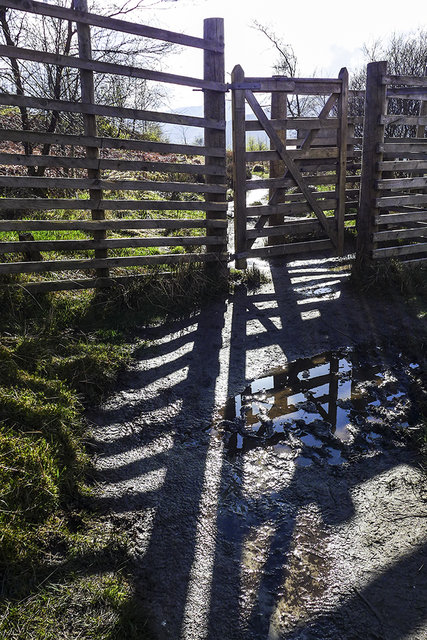 made it back down to the lovely toilet block at Rowardennan car park where they have this really pretty mural.

we catch up with the boys at the Clansman pub...and Keisha who is having a well earned disco nap on the pub floor

Finally back in the cars to head back to Glasgow.

Feeling really pleased with our wee day out as it was the only munro (albeit a really clearly marked out easy one) that I have climbed without my mountain buddy Gary. Think i might try Schiehallion next until I have Gary back for some of the more adventurous days out on the hills!

Fantastic. Brilliant. Many years ago I met a solo woman on Beinn Mhanach. She seemed more than pleased to see me, but it was just so that she could go back and tell her Mum " Women DO walk by themselves. I am NOT raving mad." Maybe if your buddy is still busy you could tempt your sister up Schielhallion, or do it by yourself. Or you could get those guys to beg or borrow some rain gear.

Well done for carrying on in those conditions, nothing like winter in your face to let you know you're living

Maybe you should be trying to follow where you are on a map for the easy hills, then by the time you have run out of easy ones, you'll feel more confident about heading out by yourself on some of the others

Well done you two for getting to the top

Now for the next ones!

It just shows how a few basic items of gear make the difference between success and failure.

Thanks for sharing your report. Thumbs up

Normally someone on here would be making some comment on the lack of preparedness of the boys with jeans, trainers and lack of decent jackets, but...............mascara

I've done Ben Lomond on at least 5 occasions now so far and seen nothing much each time. Even with the snow and mist you've got some good photos there

Scheihallion is a classic looking hill, so I hope you enjoy when you get there

Really enjoyed reading your report as I did Ben Lomond a week or 2 previous but in quite different conditions although still freezing! I think your photos are really atmospheric even if the conditions were brutal at times. You sound a bit like me, when out on my own I have been trying to complete the easier ones that are not too remote. Well done to you and your sister.

Well done you two! Looks like you had a great day out and you got to the summit.

I agree with Basscadet re following your track on a map - it will give you a real sense of security when you know where you are.

Great report, we're looking at doing this 1 at the weekend, wondering if you think it's suitable for kids or better to find a babysitter

michellemmac wrote:Great report, we're looking at doing this 1 at the weekend, wondering if you think it's suitable for kids or better to find a babysitter

A) depends on kids. You'll know them best

B) depends on weather! Allow for a good 6-7 hrs in case of 'delays,'
C) depends on parents. You'll never know them best

Will they plough on, or happy to turn back if kids grumpin'?

If you get a fine day and kids done a bit of hills before and still keen, should be very do-able, subject to usual safety proviso's - maps, correct gear, food, etc, of course.

Thanks they have done a few sub 2000's but this wld be there 1st Munro.