I was quite surprised to discover that I'd booked breakfast for this morning - I'd thought that I was planning to walk up to the little bakery place in Grasmere - and I was more disappointed once I tried eating the hostel breakfast, which was generally a bit overcooked and hard.

I can't decide whether I like the High Close chaos or not - I *should*, because I generally much prefer the remaining walkers' hostels to the squeaky clean tourist ones, but some signs showing you how to get in - or to reception once you've come in through an unmarked gate and unmarked door and unexpectedly ended up in the lounge - might be nice, and a shower that does something other than roasting hot or freezing cold, and an edible breakfast, and your name on the breakfast list after you confirmed it to reception the night before - but never mind. I'm really just glad there's still something down that way with Elterwater gone.

The other problem was that I was feeling a bit overcooked myself - Thursday afternoon had been cool and hazy enough that I hadn't thought about the sun, and now I looked a bit like a red raccoon (or anti-raccoon?). I know it was the afternoon when I got burnt and not the warm morning, because the lines on my arms were very clearly where I'd had my fleece on with the sleeves pushed up. I never learn!

Once away I wandered up through a hazy morning to Grasmere. The previous day had been clear in the morning and steadily hazier as it went on, so I was hoping that this was a paradoxical good omen - early haze so often does clear. This was a fairly rare circular walk for me, coming back to where I started, and a change from the accidental Cumbria Way of the previous days. I was defying Wainwright and starting with Helm Crag - partly because I wanted to get to the rocks before I was tired, but also because the corner of Steel Fell looked such a nice way to come down. There were quite a few people walking along the road towards Easedale, and I did feel much more in tourist country than I had since leaving Keswick. Some of them turned off onto the path for Easedale Tarn, leaving a reduced number to head onto the Helm Crag path. I still got quite frustrated at the start, because I can't stand people walking up my heels - not that I think they shouldn't be on the path, just not right behind me because it freaks me out - and whenever I stopped for a rest to let people past, they stopped too! Easedale from the path

Still, we got ourselves spread out after a while, and the path swung out across the hill and back again, and then turned straight up to the summit, which was one of those nice ones which appears quicker than you expect it. I climbed up onto the lion's head, which was was easy enough, but it was pretty windy by this point. The summit from the lion's head

I'd read somewhere that there were two ways onto the Howitzer - an easy start and hard finish up the right hand side, and a hard start and easier finish at the left. As I came up across the summit a man was just finishing the climb up the right, with his trousers flapping wildly round his legs in the wind, and then very cautiously climbing down. I knew from watching him that I couldn't deal with that downclimb in the wind, but the left hand side did look easier if I could get onto it at all - the problem there is that there's quite an overhang at the bottom of the main rock, and the shapes of the rock don't really slope the right way for getting onto it.

Still, I had a look at it, and another look, and had a go, and I did get so far up into the gap, and then decided that I wasn't going to get all the way, and really didn't want to try. And then my troubles started. I couldn't climb back down the way I'd come, because the footholds I needed were tucked under the rock where I couldn't see them, and too far to easily feel for them - and I couldn't turn round and come down forwards, because my perch was just too precarious on the steep rock, and moving at all felt horribly unsafe. I tried just waiting and thinking myself out until I knew where to go, which works on the bouldering wall, but I didn't even feel secure enough to wait, and I just started to feel even worse. So eventually, although I felt like a complete idiot, I called to the man who'd been on top when I first came up, who was sitting eating his lunch, to ask if he could help me, on the grounds that that was better than not asking and causing worse trouble by falling - he started to come over with his son or son-in-law, and as soon as I saw them coming and felt safe I suddenly untangled myself and got down quite easily!

If my knights in shining armour ever read this, then thank you again - I'm sorry for hauling you from your lunch for what seemed like nothing, but just knowing you were there did genuinely make the difference I needed!

So still feeling like a fool I headed for Gibson Knott - Helm Crag's going into the category of 'counted for now', although I wouldn't mind having another go on a calm day, since being freaked out by the wind was definitely a good part of the problem. I'll keep practicing...

Helm Crag is far more part of a ridge than it looks like from the valley, where the other hills tend to hide in the background - there's quite a drop between, but it soon rises again, and ends up higher. I was never very sure about the summit of Gibson Knott - I came quite soon to a nice obvious one, with a pointy cairn, but according to Wainwright there should been a point to the east which looked higher, and there definitely wasn't - but I'd come from the east, so maybe my summit was that was other point? It was a nice lunch spot anyway.

To the west the ridge did eventually get higher, but not very obviously before it became the rise to Calf Crag. After some more wandering over and around the various bumps I did find another possible summit of apparently much the same height, but it didn't have nearly such a nice cairn. Towards Calf Crag things flattened out a bit, and it became clear for the first time that Steel Fell really was joined on - until then the lower ridge leading to it had been hiding down below. This was a more obvious summit - at least obvious once you got there, because there were various other bumps along the way - although the ground rose much higher behind after only a low dip. I wasn't heading for the main range today, though, and sat down to wait my turn at the summit, since there was a crowd there already. 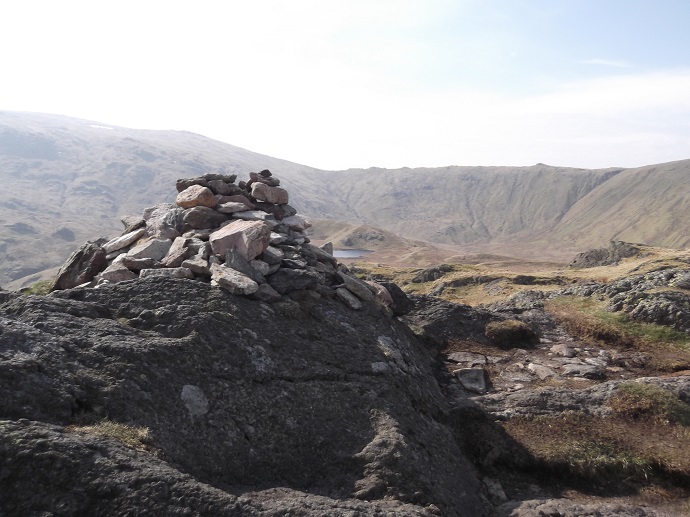 The way down to Steel Fell was marked by a line of fence posts, but finding a dry way was much more of a challenge. I followed Wainwright's advice not to be too much of a hurry to join the fence, sticking to the slightly higher ground, and it did help for a while, but eventually I did have to cross the dip to the tarns.

There seemed to be a bit more bog in my shoe than I expected, and when I looked at it I discovered that there was a hole in it letting the water right in, so everything was a bit squelchy for a while! I'd been following a group across the gap and eventually caught up with them towards the summit, where they turned out to be the same people I'd come across on Calf Crag and let get ahead of me.

The views from the summit were good all round, although hazy - along Thirlmere, over to the Helvellyn range, down to Helm Crag, looking surprisingly small, and back towards Harrison Stickle.

By this time there was a real fence, not just posts, which was a good thing as it had got even windier, and the other people's map blew away and ended up plastered against it - otherwise it would probably have flown off to Thirlmere. Ridges to the south As I expected, the ridge of Steel Fell was a lovely walk down to the valley, never steep enough to be uncomfortable (although in one place I had to dodge round to the left of a small crag), and starting off with a view of Dunmail Raise from above, and Seat Sandal looking surprisingly triangular. On the way down - heading back to the beginning As I dropped lower Helm Crag began to look more important again, and eventually loomed above as I came down into the valley. Greenburn was interesting from above, with parallel walls running along the hillside, and surprisingly beautiful once down in it. By then I was nearly down to the road, although it was still quite a long way back to the village, and after joining the road I'd walked out in the morning I got somehow misplaced onto a path through the grounds of Allan Bank, which brought me out into the village itself rather than the hostel, which would have been nice if drinking cups of tea and eating scones was allowed after 5pm, but it isn't... I think something should be done about this, because you can either spend the day on the hills *or* go to teashops, but not both, and it's not fair. My frustration was eventually overcome by a pot of tea in the hostel lounge and and beer and food later on in the pub!


HelmCrag.gpx Open full screen  NB: Walkhighlands is not responsible for the accuracy of gpx files in users posts

Great walk report. Did that walk myself not long ago and its a cracker.

Well done on doing the Howitzer. I also had a few ropey moments on the down climb, but was glad I managed it.
AW never managed it himself.