A bit pear-shaped in Barcaldine

A bit pear-shaped in Barcaldine


Encouraged by Malky_c's description of pleasant going I thought I would tackle Creach Bheinn this way. I didn't imagine for a moment that I could include all three Grahams but two seemed possible. The weather was very warm and dry but rather hazy and things didn't start well when I failed initially to find the correct road to park on. However I got there eventually, set off, crossed the unexpected little gorge (see Malky's account) and plodded up Beinn Bhreac past a cairn that didn't seem to signify anything very much. Ben More stands up above all the other Mull hills Beinn a Bheithir and the Ben Nevis range Cruachan
I walked down to the 630m col and on up the ridge to Mam Hael the 726m Graham - recently renamed. Looking across Loch Creran and Loch Linnhe from Mam Hael Beinn Starav and the ridge leading towards Creach Bheinn A col on the ridge
The walk up Creach Bheinn seemed very long and I was getting slightly worried as, for a couple of hours I hadn't found any water to top up my bottle. However just below the summit a large snow patch was melting to produce a babbling little stream. After that of course I found water all over the place Looking down into Glen Etive South to the Paps of Jura
I descended back to the col, traversed easily round below Mam Hael and climbed up to the 690m top of Beinn Molurgainn. Another good viewpoint Looking down into Glen Etive: Creach Bheinn and Beinn Sgulaird are to the Left

A zoomed view: Beinn Fhionnlaidh is on the L in front of Bidean with the Buchaille Etive Beag on the R Cruachan from Beinn Molurgainn
I headed down the broad ridge roughly SW, went through a gate in a deer fence, and headed down towards the Eas na Gearr. It was here that things started to go a bit pear-shaped

I crossed the first stream easily, breezed over to the second and was confronted by a totally uncrossable gorge

I remembered that Malky had mentioned a gorge but assumed it was further down, and I hadn't yet read the new SMC book on the Grahams. I pushed on upstream for a bit, but it looked as though I might have to go miles (with the benefit of hindsight another 100m might have been enough), whereas downstream I could see the gorge opened out; so I turned around, recrossed the first stream and followed a boggy track high above the river that eventually led to a new bridge across it with a bulldozed track on the far side. Surely this would lead to the road - or so you'd think! It clmbed steeply at first, meandered about, smashed brutally through a deer fence and then petered out in some featureless moorland with tracks going in all directions

I normally walk with a large scale Anquet printout in my pocket that I can read without glasses, and it looked as if I'd walked off the edge of it into limbo

I also carry an OS map - in case - but the start/end of this walk are on the Oban map and I didn't have it. I really had no idea where I was

I followed various tracks that just went in circles and then got out the compass and headed West: I would hit either the road below my car or cross my outward track. Pretty soon I could see the green hill of Na Maoilean and work out that surprisingly I was about 20 minutes North of the car. I got back in the gloaming at 9.00pm

The confusion remained until I started to write this report and took a close look at the 1:25k Walkhighland map and found it was totally different to the 1:50k Anquet. 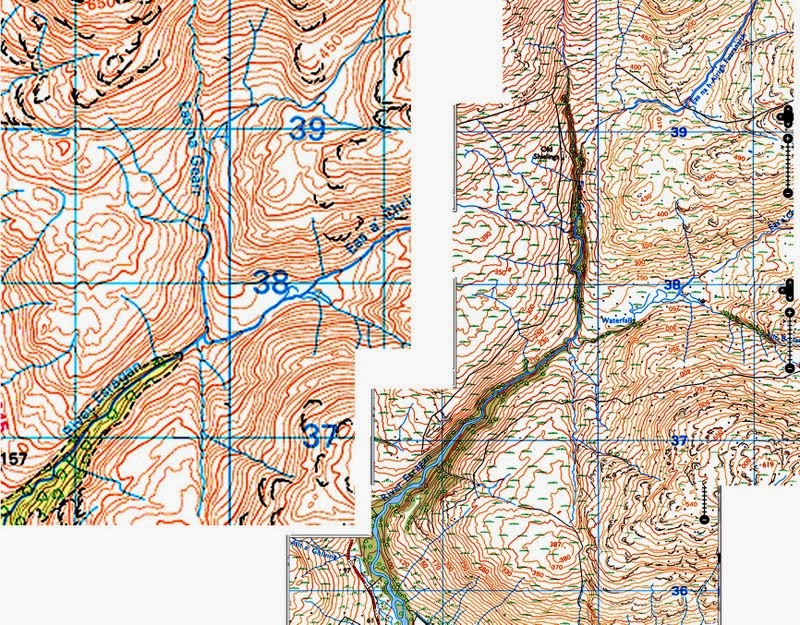 On the Anquet, the riverside forest stops at an Easting of about 376, whereas on the Walkhighland it goes nearly 2Km further North: also the comparative size of the streams as indicated by the thickness/intensity of the blue lines are quite different. The new bridge of course is on neither. So in fact I hadn't walked off my map at all - rather I'd been just over 1km further N than I thought at a different stream junction. It all made sense

I clearly need to read reports more closely, but then life would be very boring if everything went exactly to plan