our_route.gpx Open full screen  NB: Walkhighlands is not responsible for the accuracy of gpx files in users posts
Next on my Munro target list was Cruach Ardrain and Beinn Tulaichean. I had been speaking to another walker while in Crianlarich YH and he had shown me a route on a map which reaches the start of the Grey Height's ridge directly from the back of the YH - my car could have a day off, even if it was only saved a mile or two! The route involved going through the Inverardran woods and as the other guy had described it pretty well I thought I'd give it a go.

The day was quite warm already and it was only just before 09:00 when I started. I headed out the back of the YH car park and followed the paths as described through the woods - nice and wide, excellent. The guy had described carefully the one bit on the map which might be tricky. "It's easy to miss this little path as there is a fallen tree in front of it, but if you push the branches aside you'll see the path behind the tree". Of course I missed it and had to double back when I realised. After pushing my way past the branches of about a half dozen large trees, and getting god knows how many beasties on me, I found the bog-sodden path! The path seemed quite short on the map but the fact that I was hunched over a lot of the time to avoid branches, and my feet were getting wet in the bog, it took a long time to break through the wood out into the open. I'm sure the guy meant well but it's not the best start to a walk I've had. I was now sweating like the proverbial hog and used up a lot of my squash at this point. Made a note not to come back this way.

It did lead to Grey Height though so after a quick Fosbury Flop over the fence I was on my way up and along the ridge with my first Munro in sight. I was finding it tough after that start, and with the sun trying to fry me. Better than rain I guess! There is a good path for the majority of the ridge and if followed will take you all the way to the top of Cruach Ardrain, which I reached at 11:35. I saw two ptarmagins near the top, my first in the flesh. They legged it around the other side of the summit when
they saw me. Can't blame them really, with a bright red face, dripping fluid and blowing hard I must have looked a bit scary. I took a summit picture looking towards my next target. I'd read how Beinn Tulaichean can be hidden from view when tackled from this direction until you more or less get round the side of Cruach Ardrain. There was a little bit of low cloud now but it was still roasting. It's quite a steep decent from here but the good path makes it easy. When I reached the bealach between the two peaks I could get a good view of Ben More and Stob Binnein. Shame it wasn't like that yesterday when I was up there. And a good view of my route to Beinn Tulaichean. 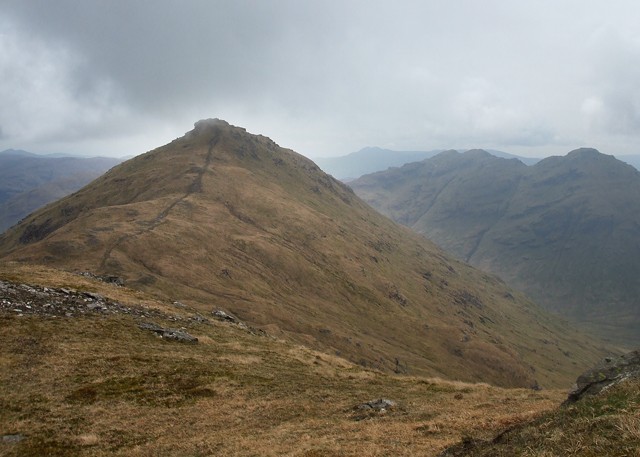 Once I reached the top at 12:25 it was time to get the flask and sandwiches out. Stayed a little while as views were just great. Took a summit picture looking back towards Cruach Ardrain. My route back was to be back to the bealach, turn left, go to the right of Stob Glas, via Coire Cruaiche and drop down to the River Falloch. Not a bad route, no path that I could find but was down by the river 1 hour 15 minutes after leaving top of Beinn Tulaichean. Time for another cuppa and a quick dip of the feet in the river. Haven't seen a tree sprouting directly out of a rock like this before. I followed the landrover track all the way to the road then followed the road back to the YH. Not the best ending to a walk but I really wasn't up for walking through the woods again.

I've seen quite a few trees (and other 'gardens') sprouting out of rocks - all they need is a little damp crack (now, now!

)... I was going to take the forest route up but you've put me off - if it's boggy at this time of year after the long dry spell there's been, I think there's no hope for it really... Great pics there

I think I'll be going up from the road where you came back to but then I need to pick up Cruach Ardrain's 'top' on the way back down...