4 Munros in a Day ! And you get the bonus of enjoying (!?!) all the earth moving equipment on the hydro electric scheme!

As Panther's walk report in April said, this is another Glen where a major hydro-electric scheme is being built and at present it looks very ugly low down near the road. However, once you get up high this is a great day on the hills.

Start:
The track opposite the telephone box is blocked off and don't go wandering into the gardens of the private houses as they get upset.
About 30 yards closer to the parking spot there is a new gate and track . (note the green post with Yellow/orange top on the left hand side, these are used to show the way up to the hill). 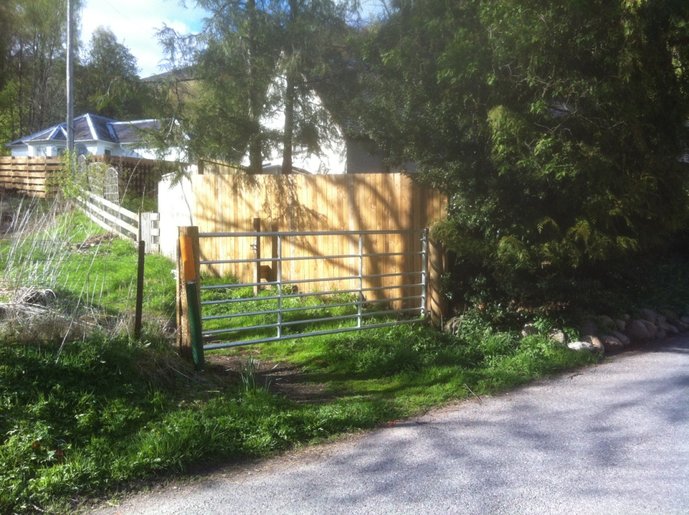 The obvious path wanders up into the forest via two gates and emerges onto the big muddy road made for the Hydro scheme. 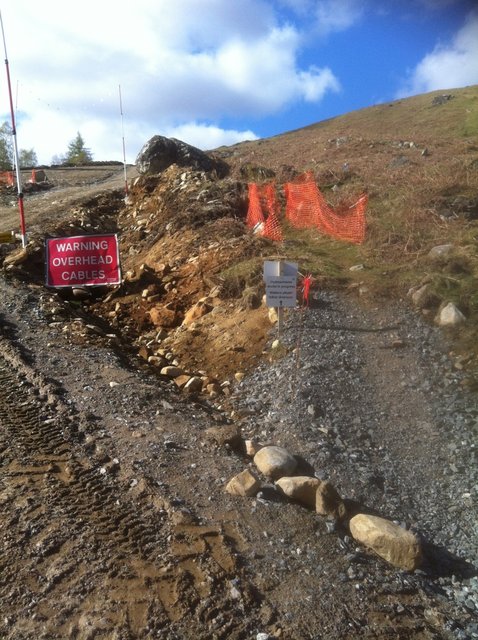 If you follow the temporary signs and the footpath up the R side of the Hydro road, it will naturally lead you up the slope of Roinn na Creage and onto an Anti Clockwise circuit of the 4 Munros.
This is good in that it gets you away from the Hydro Scheme mess quickly. The only down side is at the end of the walk, when you are tired, you have a steep slog up to Carn Gorm as your final summit.

Note: if you want to go clockwise you will probably need to turn L out of the forest and follow the Hydro mud road around to the left for about 10-15 mins (not straightforward if they are working with big earthmovers) until you see a green post with yellow/orange top which leads down to the Rickety Bridge. As I was finishing the route I tried to see whether there is a footpath close to the Burn on the R side (ascending) but it looks to be blocked at several points by hydro work.

The Anti-clockwise route was chosen by me and its a good, steep footpath to the SW shoulder of Creag Mhor (Meall na Aighean) with good views back to Glen Lyon. 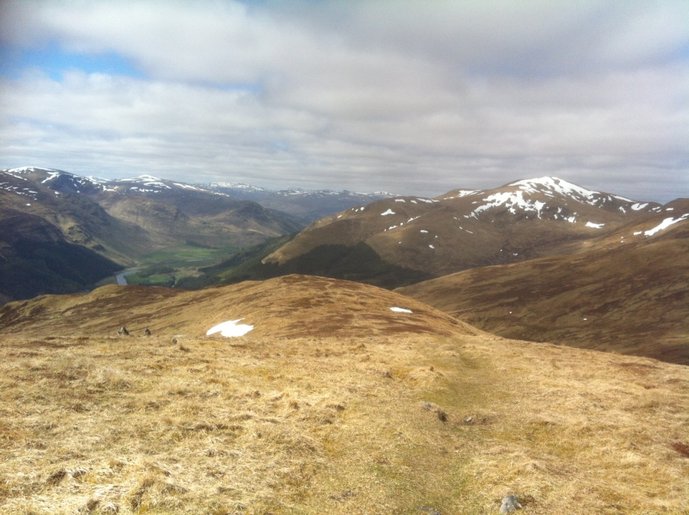 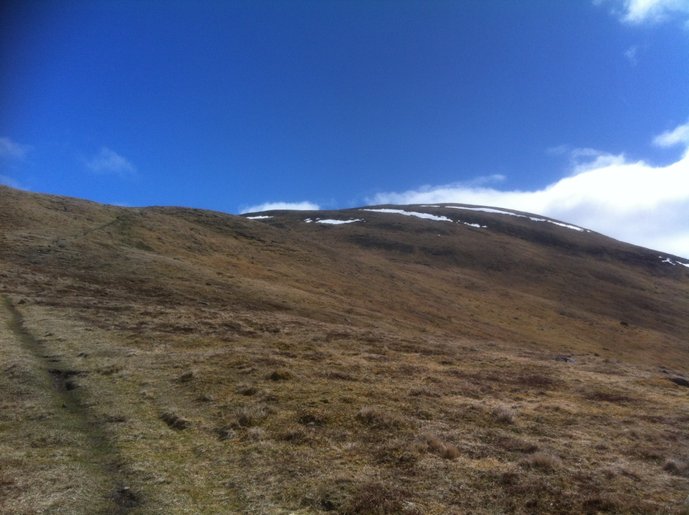 Retrace your footsteps a little to where a path contours slowly down and right towards Meall Liath and Carn Mairg. 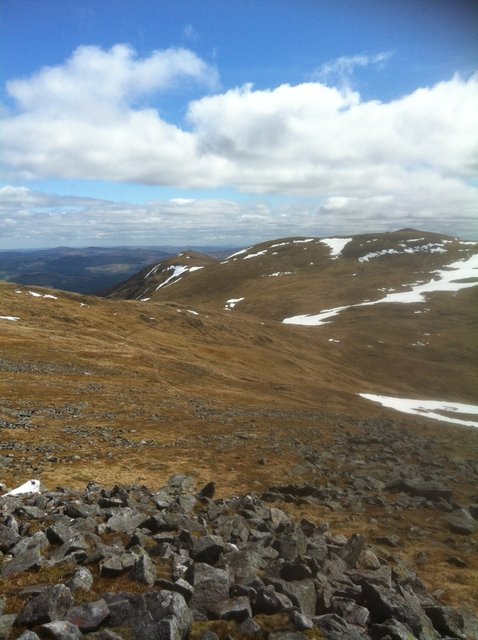 This is a nice contour path until it nears the steep front face of Cairn Mairg where a steep and rocky path on the R side goes more or less straight up to finish to the right of the rocky tor. On a clear day the route NW/West along the ridge towards Meall a Bharr and Meall Garbh is laid out before you. This is a long relatively flat ridge with several Tops en route:- Continue following the old iron fenceposts which eventuially lead down into a col . The footpath follows the fenceposts up the spur between the big snow patches. 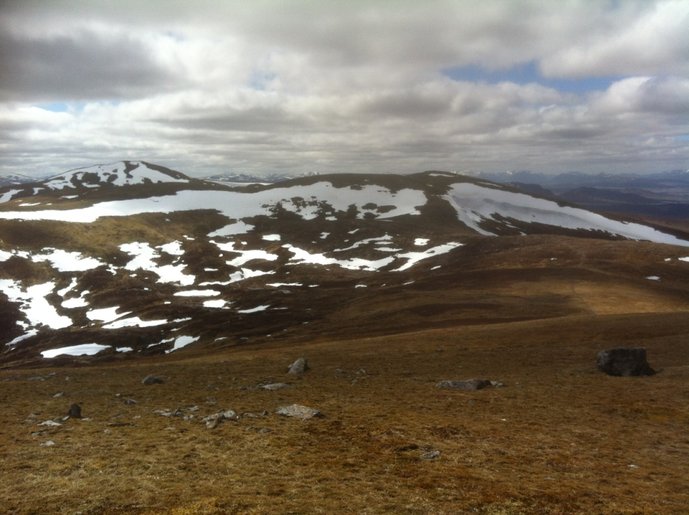 The posts lead up to the summit of Meall Garbh and good views of the final objective - Carn Gorm. Descend off Meall Garbh - good footpath steep in places to a col between the two mountains. Follow the path up the steep slope towards the top of An Sgorr but after about 100 yards the footpath contours off right avoiding the top of An Sgorr and contouring around to meet the final slope leading up to Carn Gorm. Big snow patch on the West flank of Carn Gorm The final slope up to Carn Gorm is steep but a good footpath emerges on the more northerly summit with fine views to the North- Loch Rannoch, Ben Nevis, etc Great views all around and a great panorama of the route you have just walked. Wander over to the other summit of Carn Gorm to enjoy fab views to the South down into Glen Lyon and across to Ben Lawers . 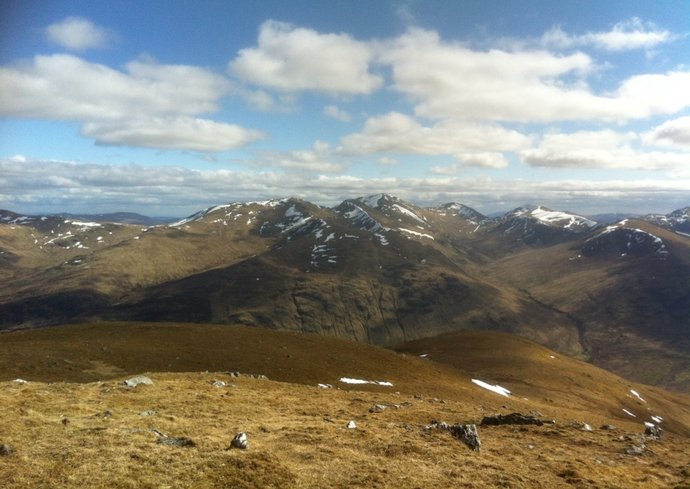 The path down off Carn Gorm is well defined and generally easy going (apart from two short steep sections). Slightly soft and boggy in a few places but this is nice and easy on the knees in descent. As you get down to the edge of the forestry plantation the footpath is re-routed alongside the Invervar Burn. The footpath follows the R side (descending) of the Burn to the Rickety Bridge. At this point the path seems to join the big muddy road of the hydro scheme and I followed this down past big excavation holes and large earthmoving vehicles (It was late afternoon and the workers had stopped).
I couldn't see a footpath away from the big mud road but there may be a small footpath down by the Burn.

The mud road leads in about 10 minutes to the point where you can fork right back onto the forest path down to the start point.

Shame that the lower part of the walk is currently such a mess but this is a great walk with really good views once up on the hill.

This is the estate which gave walkers so much grief about the environmental impact of their walking these hills! Wonder what they would say now?

So it hasn't improved much since early April - I mean the hydro scheme. But once higher up, it's a lovely ridgewalk. Not much white stuff left now

We struggled up Cairn Mairg in thick layer of slushy snow, now the slope is completely bare. And great views any time of the year!

I hope once the scheme is finished, the glen will be tidied up.