2 people in group, practice for 3 peaks challenge.
Weather was strong winds on the tops, broken cloud with sunny intervals cloud base well above 1085m Snowdon summit. Temp 14-16C out of wind.
Intention was to climb Crib Goch however on approach it was clear that the upland winds forecast was a reality which meant that the only sensible decision was to leave this for another day. As in fact confirmed by the rescue helicopter circling later in the day.
Attempted to park at Pen-y-pass at 0830, but no spaces available and parking charge is £10. Parked in park and ride and cost usually £5.
Took bus back to pass. Started off at a good pace and made the Crib Goch path in 30mins. Continued along the Pyg track with goods view down and along the Miners track. Onto the main ridge with strong winds and some broken cloud. First time I have been on the top in the new cafe. Wow what a difference, its a fantastic place, may have been the best hot chocolate I have had, with huge viewing windows looking out over the Western hills. On with the route, decided to reverse the route of our last visit to get as much ascent in as possible. So down the Snowdon Ranger path then Foel Gron, Moel Cynghorion, Moel Eilio. Once again met "that guy", old man of the mountains, you know the one, "how you doing guys? great day huh?" then zooms passed you without losing breath.
Some fantastic views over to the Glyders with Tryfan popping up on the horizon. In the opposite direction to the SW, Mynydd Mawr and behind that the wonderful Nantlle ridge. What a marvelous day to be in the hills.
Finished off some custard cream biscuits on Moel Eilio in the wind break, then started the run down off the hill.
Met a wonderful lady on the final part of the descent into Llanberis. She talked to us about her climbing achievements in the Dolomites in the 60's, pioneering a lot of the classic mountaineering routes. Then her experience training Army divisions survival skills before operational deployments and her continuing fight against eczema. Raising awareness and fundraising, a true inspiration and great to talk to. See itchingtoclimb
Finished up with the obligatory big mug of tea in Pete's eats. Snowdon looking fine in the cloud 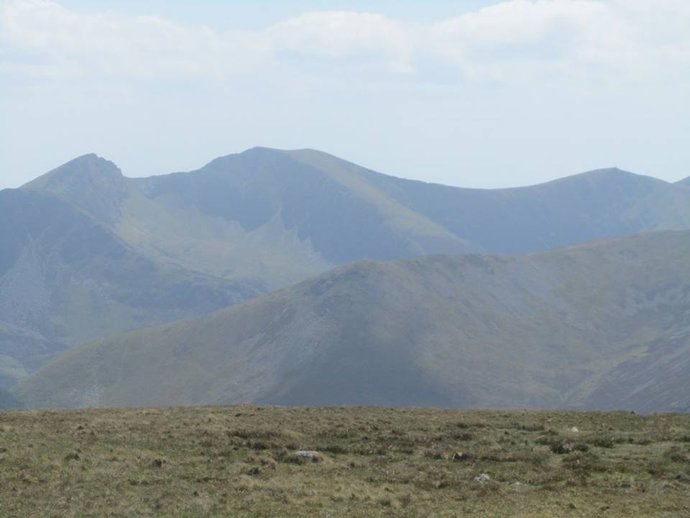 The Nantlle ridge in the background Tryfan on the horizon