With no new walk reports on the horizon for me just now, time to scrape the barrel again and see what is left at the bottom. I was recently thinking about a great day I had out in 2008, when I had set off to have a short day on Beinn na Muice. Despite being close to home, Glen Strathfarrar always feels like a bit of an adventure, with having to get permission at the gate-house to drive up. Bikes are also a possibility, but time was not an issue this particular day so I drove up and parked a couple of km short of Monar Dam. A very attractive glen - actually worth cycling up to see it at a more leisurely pace. 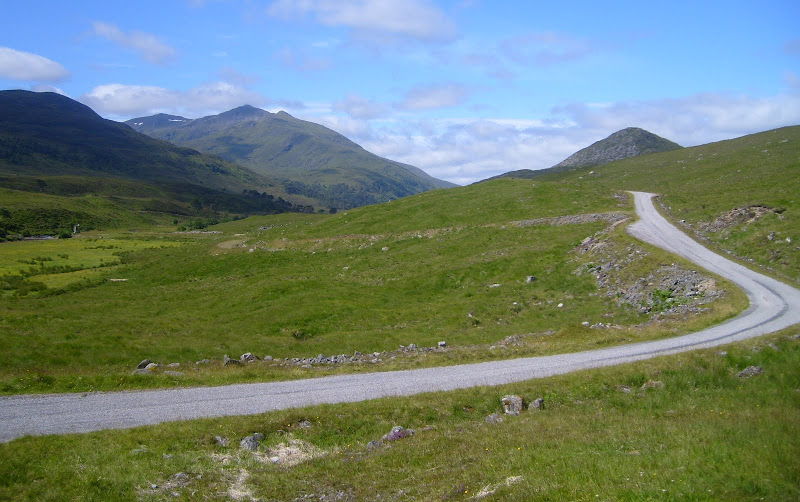 I started up the vehicle track leading to Loch Toll a Mhuic, but soon cut off to the left to ascend the steep, rocky eastern end of Beinn na Muice. There was some optional scrambling, but nothing difficult, and the route was dry and pleasant. A little under an hour saw me on the summit, from where it was worth the walk westwards to look down on the Loch Monar dam. A great point for a break. 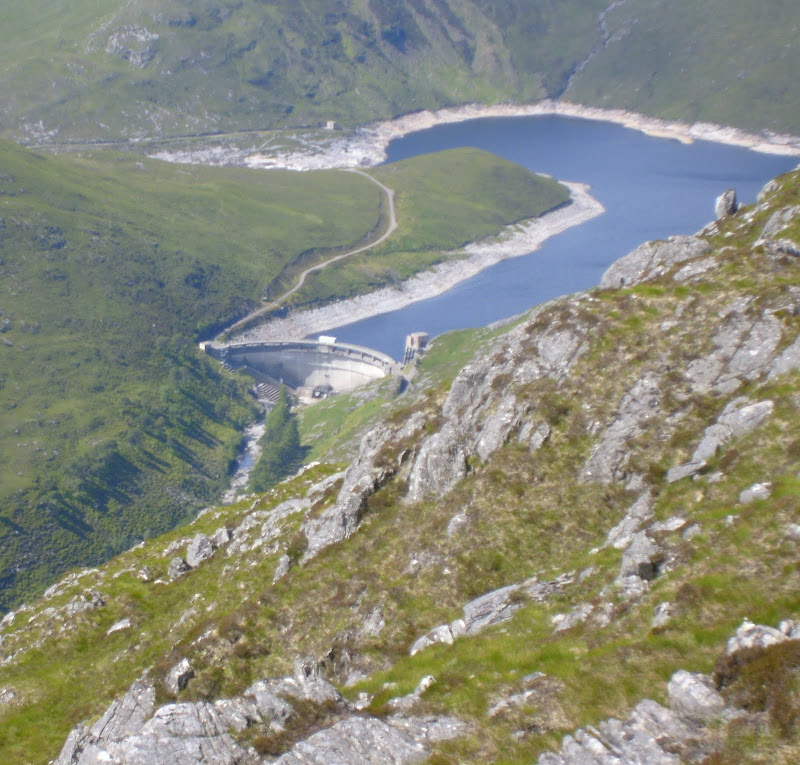 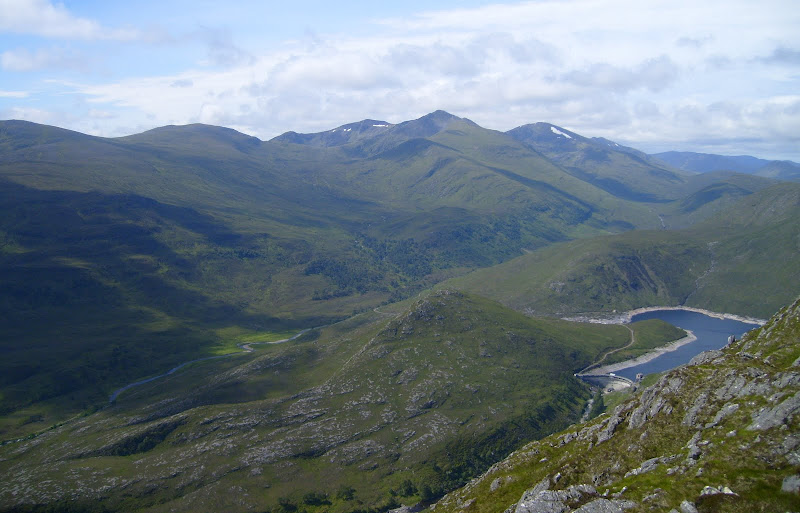 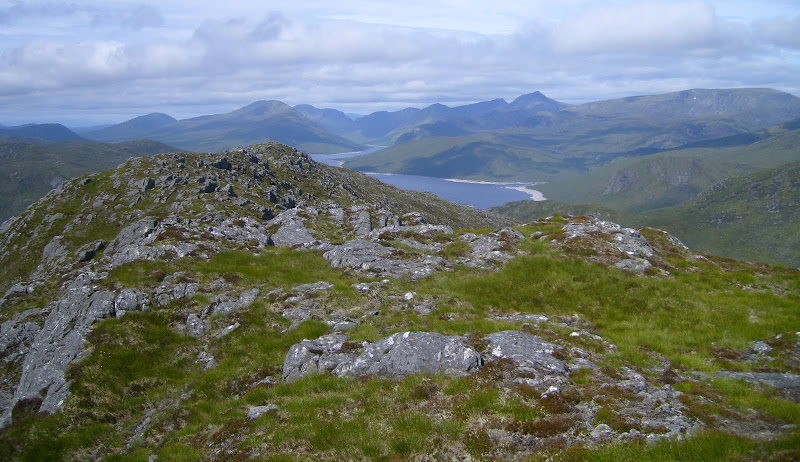 I had been looking for a short day, but this seemed a bit too short, so I looked at Sgurr na Muice. It looked like it would offer some good entertainment, plus it was one of the great unknown hills - not qualifying as a Corbett but still having enough ascent all round to be fairly prominent.

Sgurr na Muice from Beinn na Muice (with Sgurr a Choire Ghlais in the background): 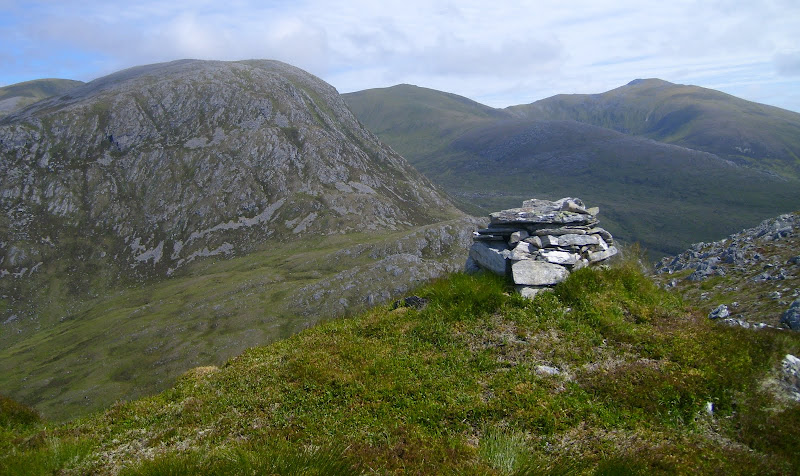 Back down Glen Strathfarrar to Sgurr na Diollad: 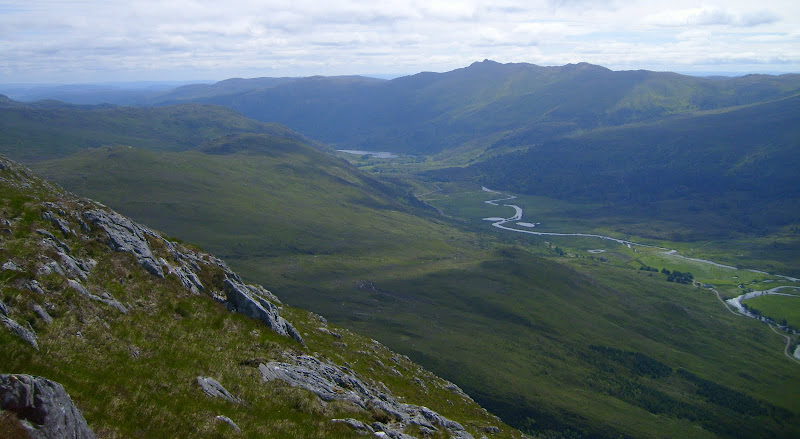 Dropping off the back of Beinn na Muice was a little harder going than the descent - not quite as steep, but much more heathery and bouldery. I saw a fox on the way down, one of the few times I can recall seeing one in the hills. Sadly my camera zoom wasn't good enough to capture it.

Ascending Sgurr na Muice was similar to my descent, with a couple of lines possible. In fact an unmarked stalkers path comes up from the Allt Toll a Mhuic to this col, another possible ascent route. The summit was much smoother and grassier than Beinn na Muice, more in keeping with the group of Munros it is attached to.

On the summit of Sgurr na Muice: 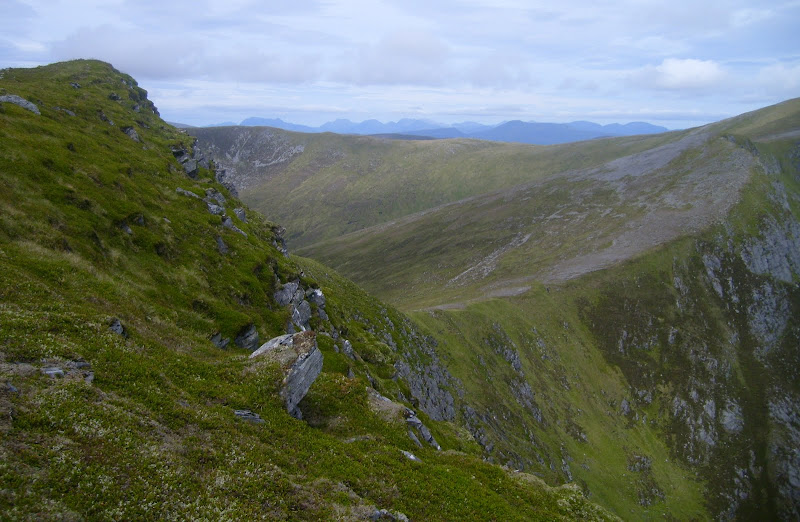 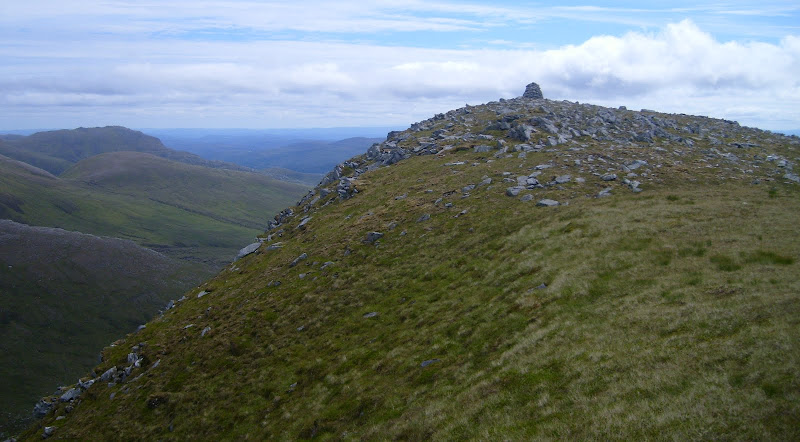 There are some pretty big crags on the NE face, but you don't really get much impression of them until you have passed the summit. From here, the lovely easy green ridge to Sgurr na Fearstaig looked far too tempting to miss, so I decided to carry on with the round. 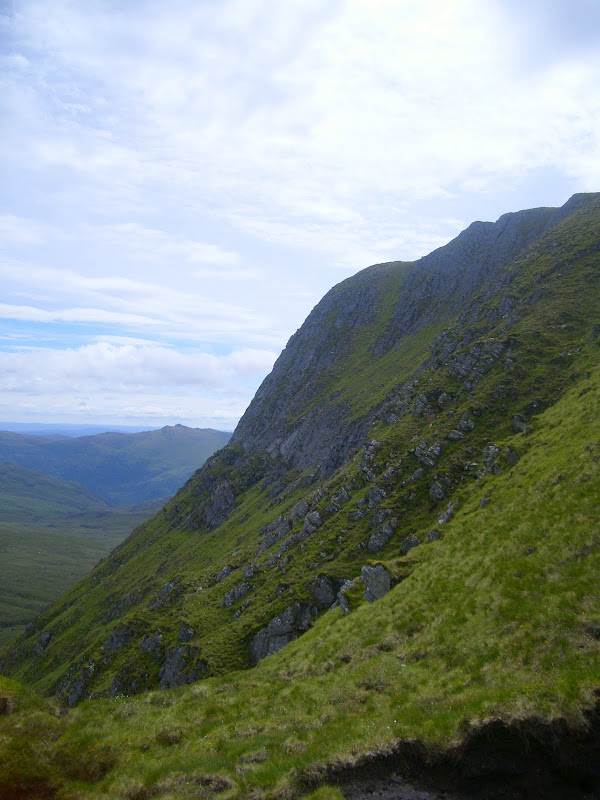 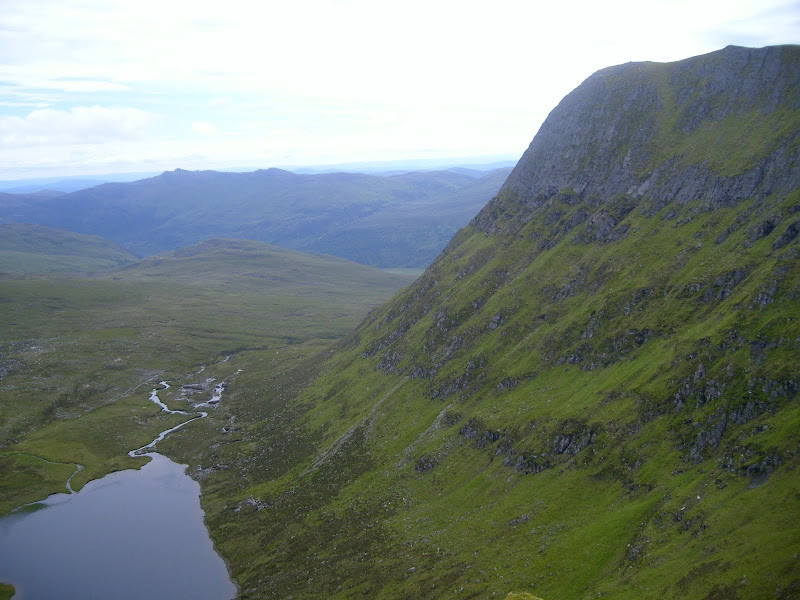 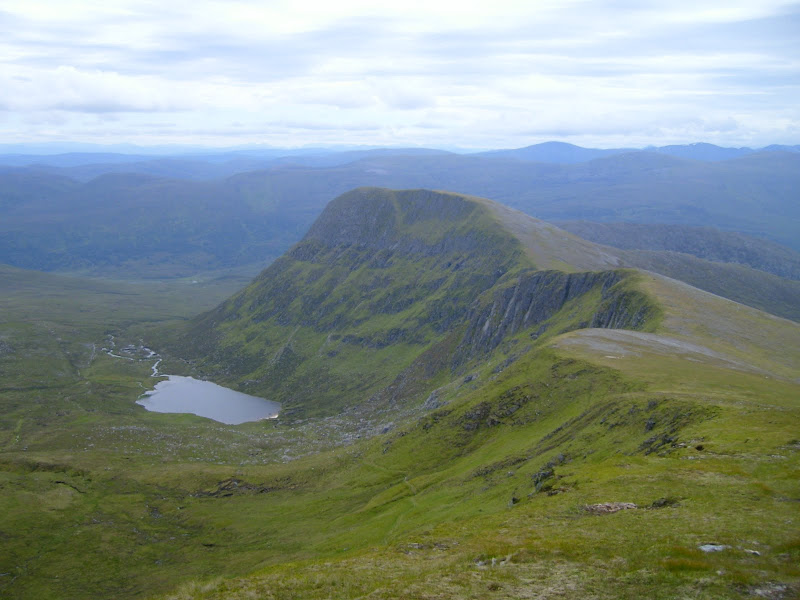 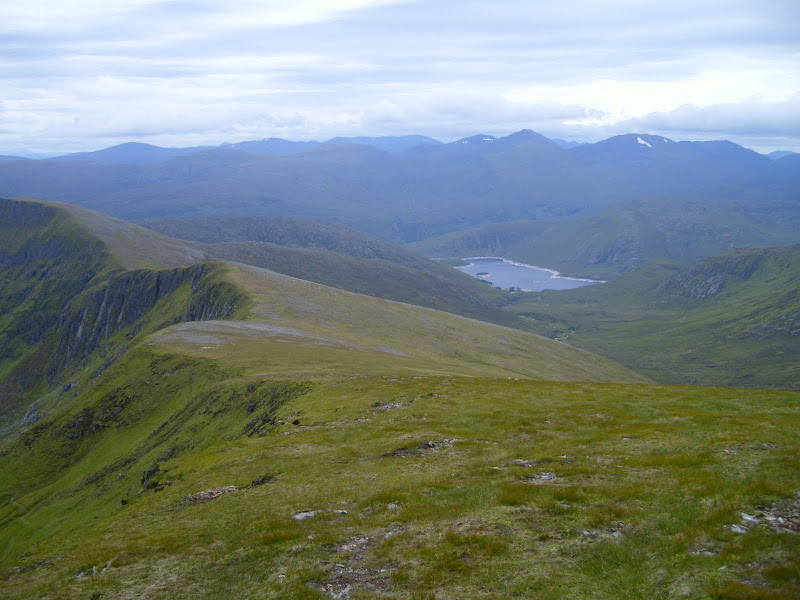 The going was as pleasant as it looked, and before long I had passed Fearstaig and Sgurr Fuar-thuill and was on Creag Gorm a Bhealaich. Photos of these hills have always interested me, with their well hidden northern corries, so it was nice to get a proper look. This group were among my last few Munros to do, and although the weather had been hot and sunny, there had also been a lot of drifting cloud obscuring the views. A strange day.

NW to Loch Maree and Fisherfield: 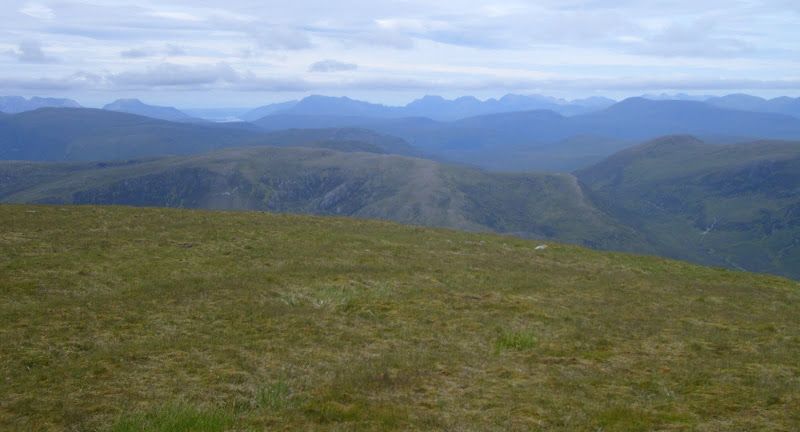 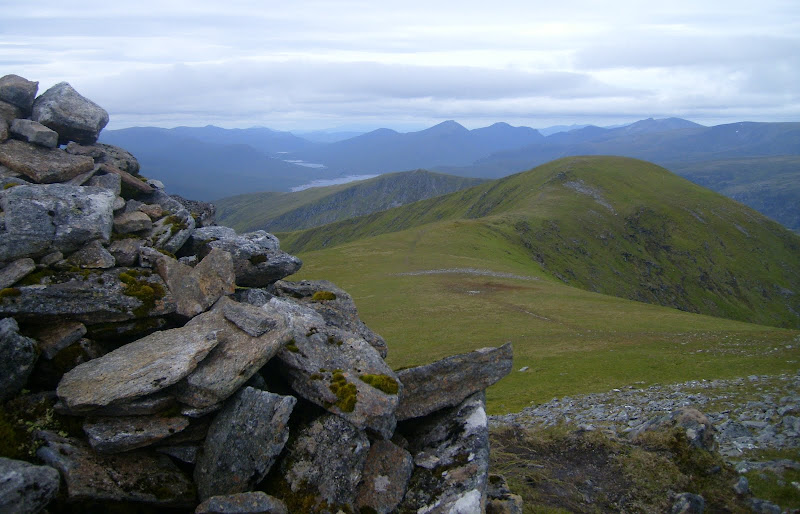 East to Sgurr a Choire Ghlais: 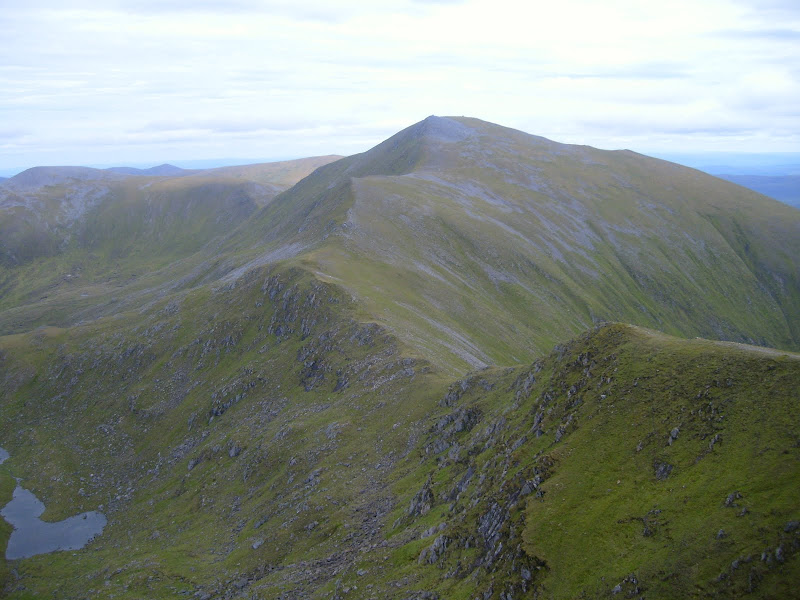 It was pretty straightforward to complete the horseshoe by heading down the grassy (with occasional stony sections) ridge past Gob a Chairn to hit the stalker's path to Loch Toll a Mhuic. Sgurr na Muice really showed its best side here too.

Across to Sgurr na Muice: 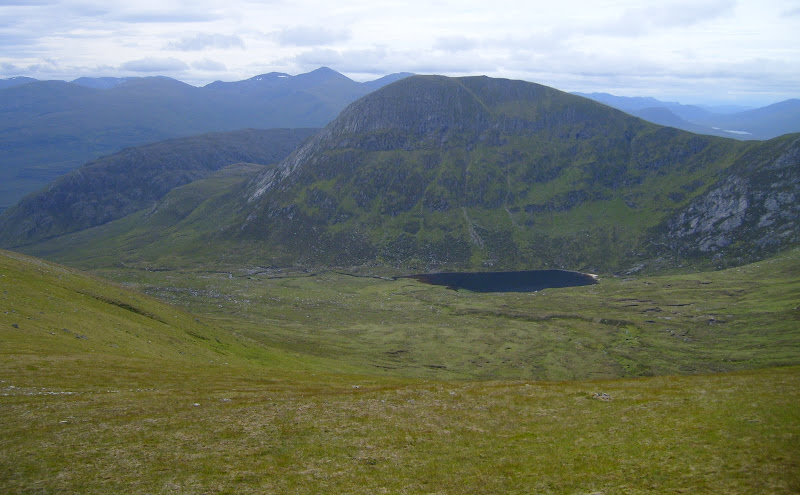 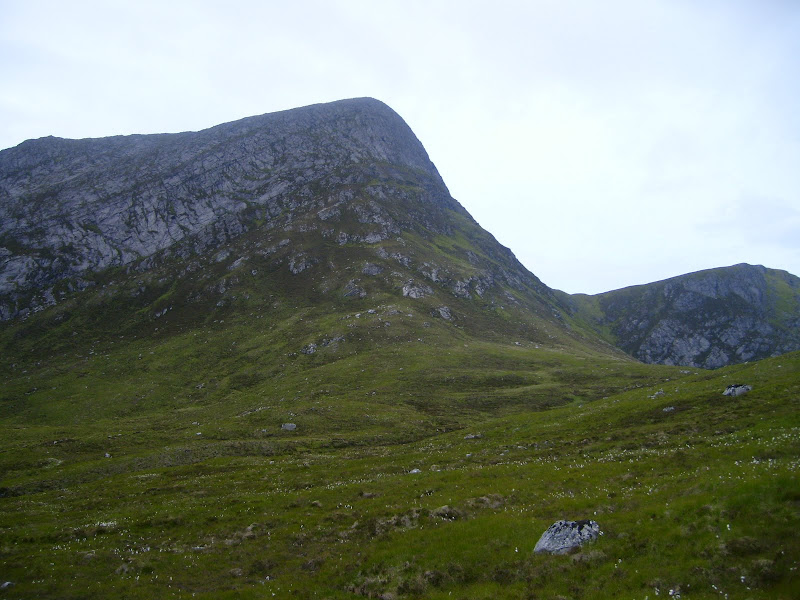 An easy stroll took me back to the car in good time, it only being early afternoon. I took a short drive over the dam to the end of the road to have a look about, and for useful future reference in case I decided to approach any hills from there. If I'd realised that Meall Innis an Loichel was one of the easiest Marilyns in the country, I would have nipped up that too! 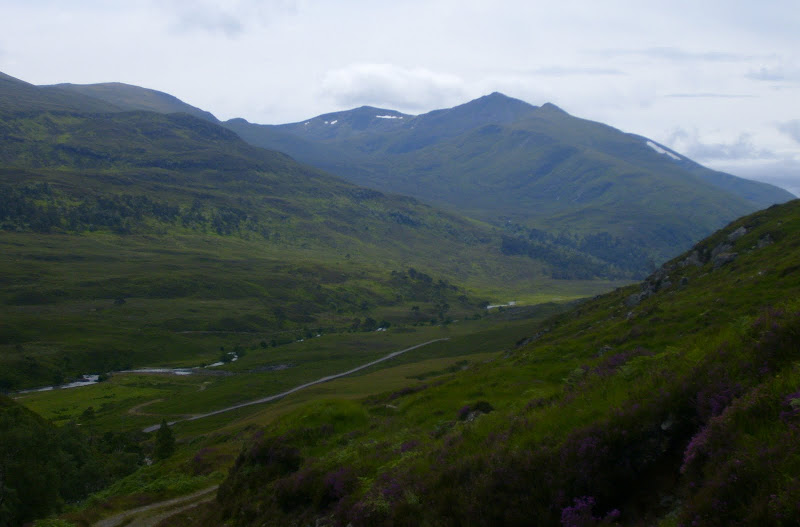 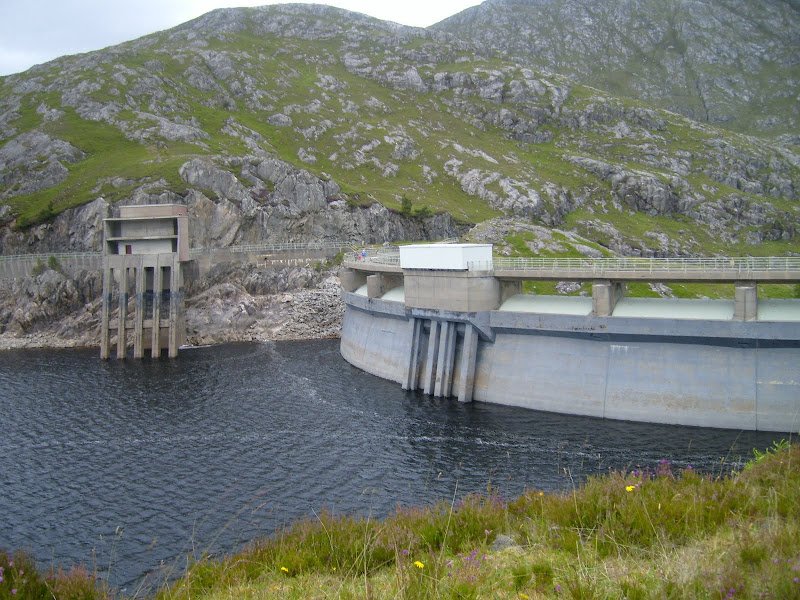 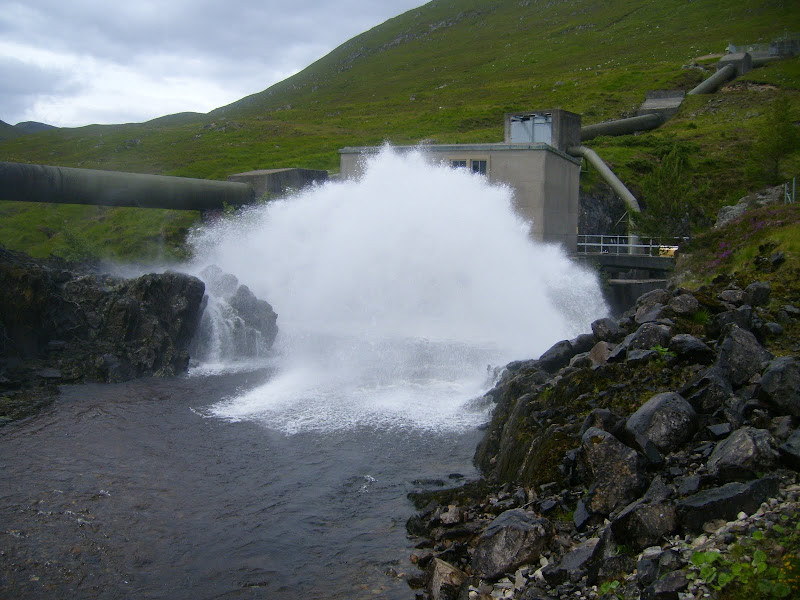 This is a great example of the sort of walks you can come up with if you are not focussing on Munro bagging. I whizzed round the four previously and had a thoroughly good time, but I enjoyed this little jaunt even more.

What a great wander, some fantastic views too

some of the most informative photos I've seen of this area

. Having just dusted off my bike this evening for the first time this year, I suspect a cycle and wild camp will be the order of the day for this hill group as I hate time pressure on any walk

(even if it is within my capabilities).

That looks a cracking wee horseshoe walk, really liked the look of this route. An area ive not been to yet, after reading this report im sure i / we will be heading that way soon.