Bank holiday Monday the 4th of May was one of those days a bit too cold and windy to plan a multi-Munro traverse, but good enough to visit a lower hill, like a Graham with amazing views

We chose Cnap Chaochan Aitinn mainly because it's not that far to drive from home and the approach is on a track almost all the way to the summit, which should make for quick going. The other reason for us visiting Strath Avon was to investigate, if it would be possible to climb Ben Avon from this side (bikes included) later this year.
The Graham itself does not have much character, it's just another lumpy bump in the high plateau between Tomintoul and the main Cairngorm massif, but the summit panoramas are well worth the long walk-in, especially when the Cairngorms are sprinkled with fresh layer of snow

It would be possible to cycle almost to the top of the Graham, even Graham guides suggest that option. We decided to walk it, mainly to build up stamina. It took us only 5 hours for a round trip up and down the track anyway.
A large car park is provided for visitors to Glen Avon (signposted from Tomintoul) and walking/cycling begins from here.

Track_CNAP EAS CHAORACH 04-05-15.gpx Open full screen  NB: Walkhighlands is not responsible for the accuracy of gpx files in users posts
The first 4km are walked on a good track, mostly tarmac and great for cycling. My idea to tackle Ben Avon from here was now turning into a proper plan!
Lovely views from the very beginning, mostly down to the river: 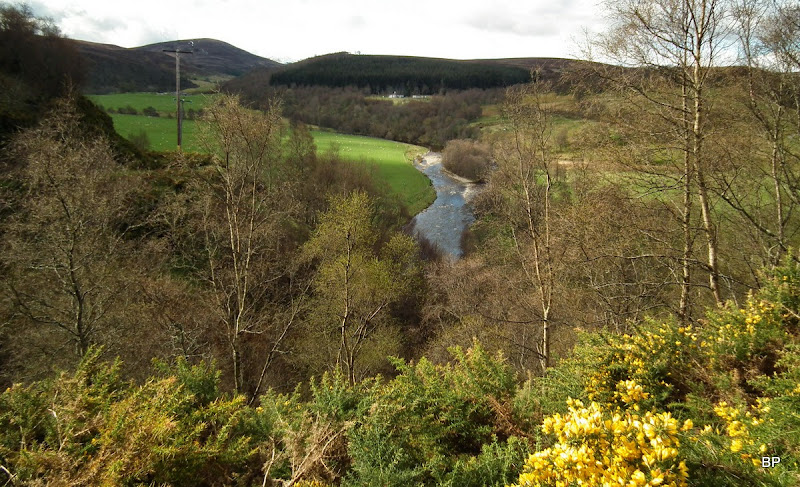 Liath Bheinn, one of local tops, also has a track all the way to the summit: 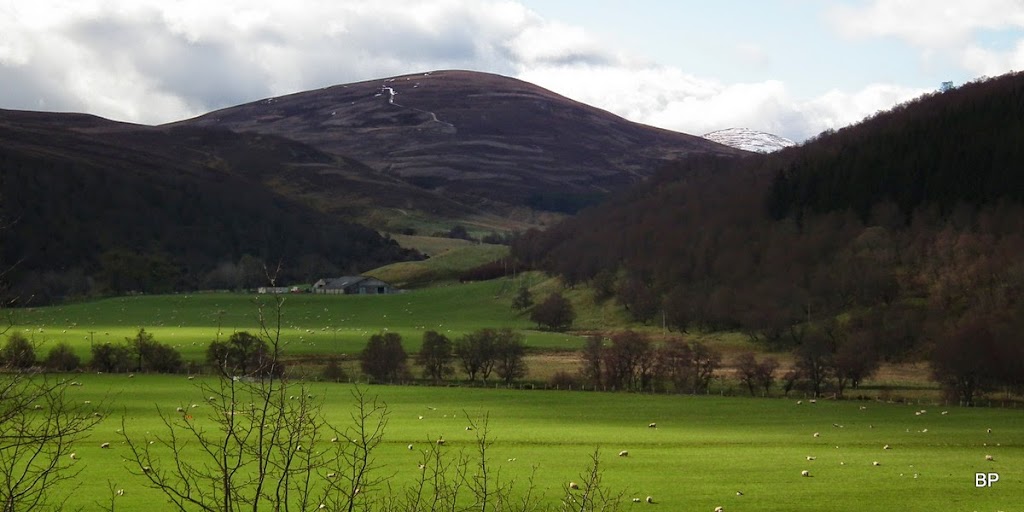 The walk to Auchnahyle on the main track was pleasant enough and we were sheltered from the wind in the glen. Still cloudy at the moment, but the cloud was high so we had high hopes for some good views from higher ground later...
There are a few bridges across the river, mostly just access to farms, so it can be a bit confusing. This is the one to cross: 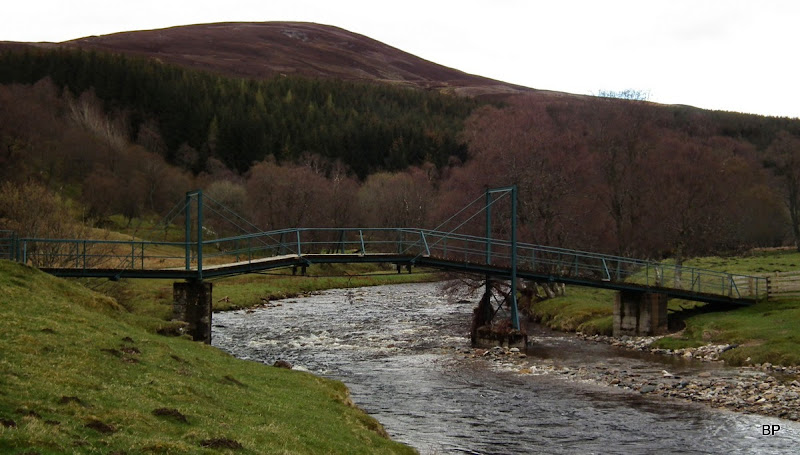 River Avon from the bridge: 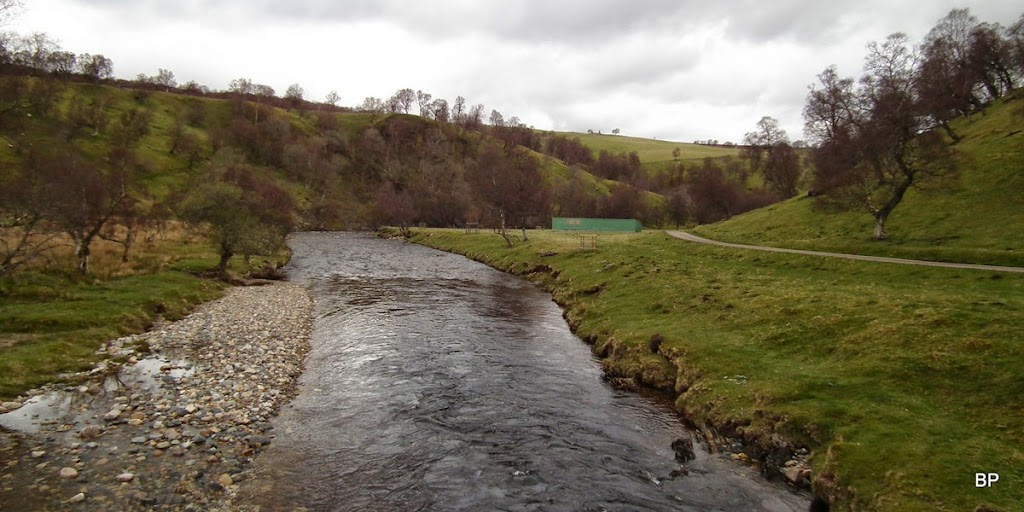 ). The track then crosses a grassy field and carries on past a ruined croft, and alongside the ravine of Allt Bheithachan.
Views may not be as breathtaking as in western country, but the rolling-rolling hills have their own unique beauty.
Upper Strath Avon from above: 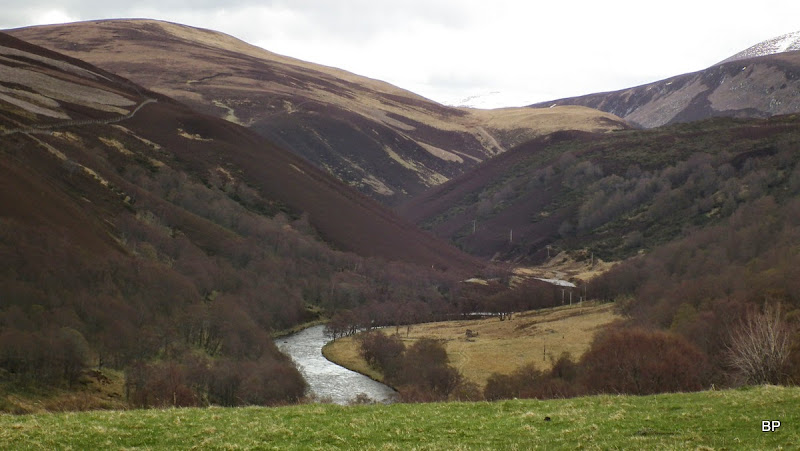 We followed the track as it dipped slightly to cross Allt Bheithachan. It felt a bit like yellow-brick-road type of adventure at the moment... 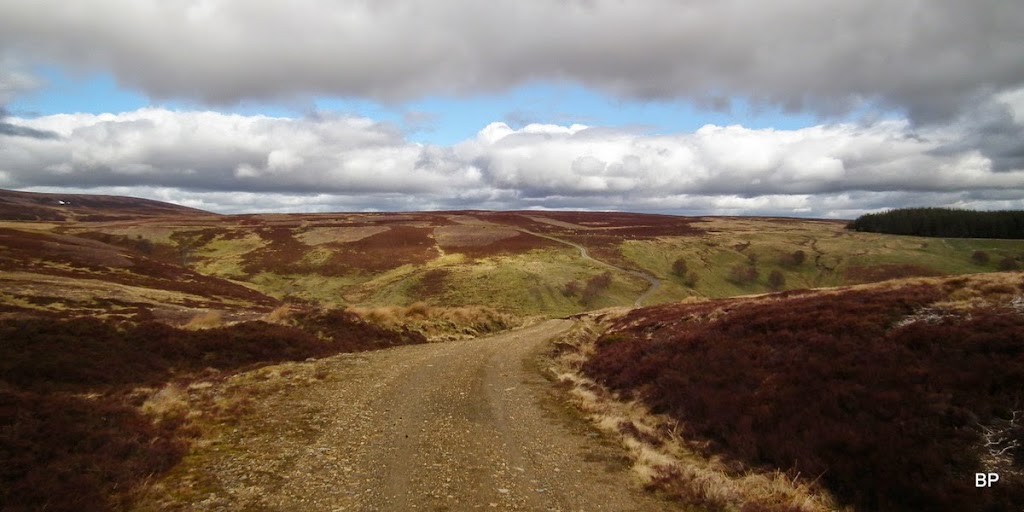 ...but soon more distant hills showed up on the horizon - like Ben Rinnes: 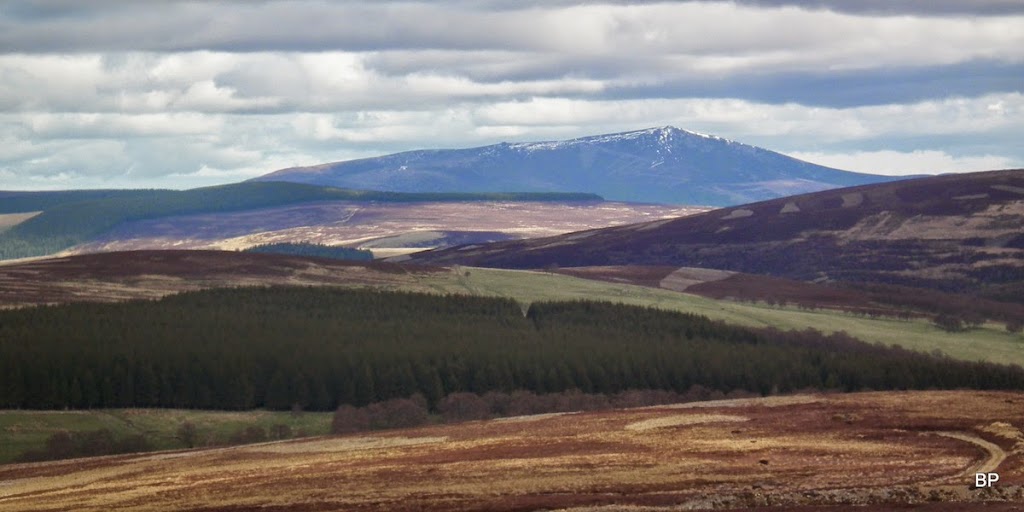 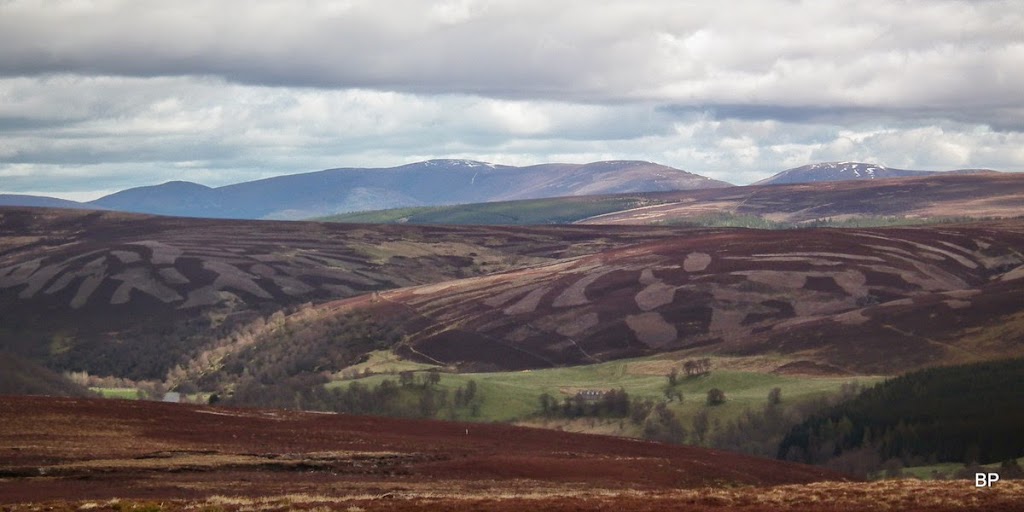 We carried on on the wide track, past many grouse butts to the minor top of Carn an't Sleibhe. Here, when we looked back, we could see "our" track as a zigzaggy line cutting the slope in two: 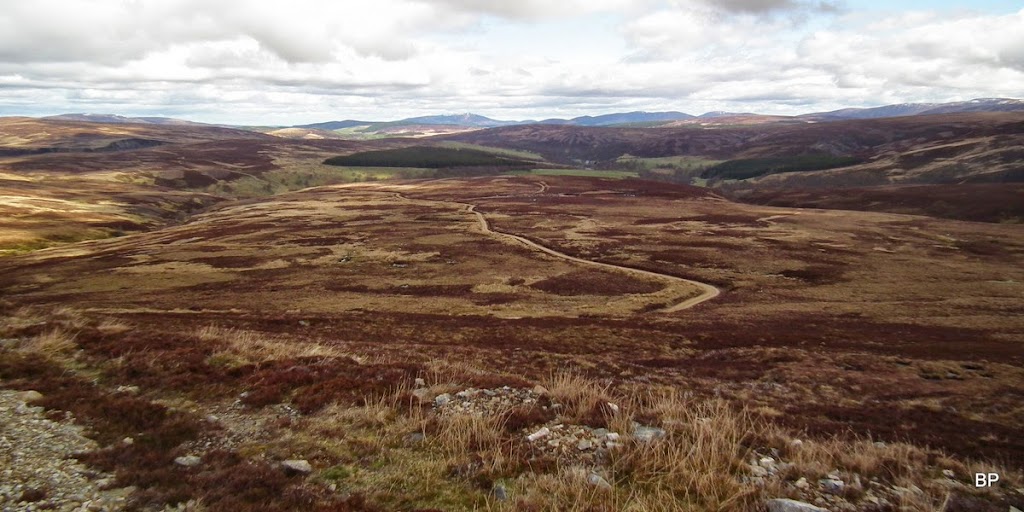 We stopped to put on windproof jackets and warm hats, as the day was still quite chilly and plenty of weather about: 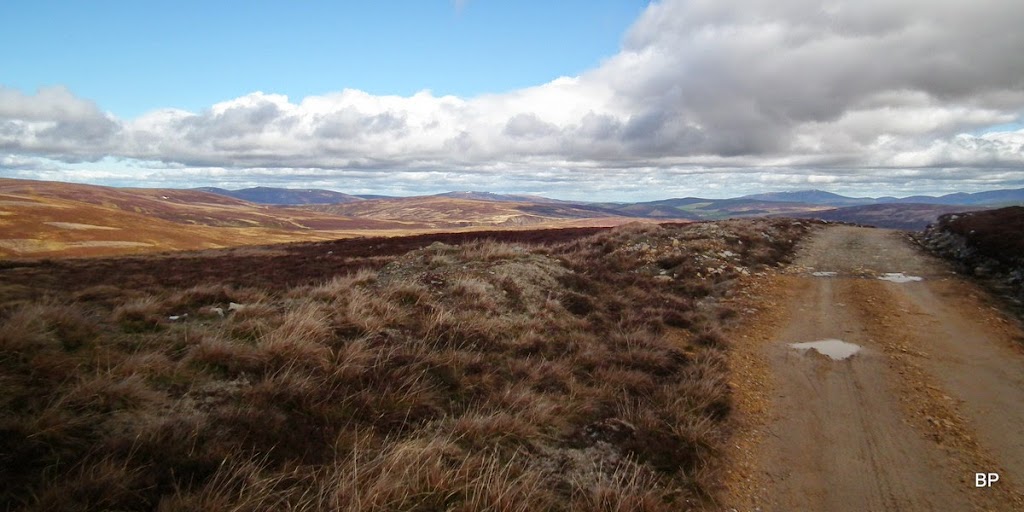 The best views are of course to the south and now we had the first taste of what was yet to come: Glen Loin and the white tops of some Cairngorms... Bynack More to be precise: 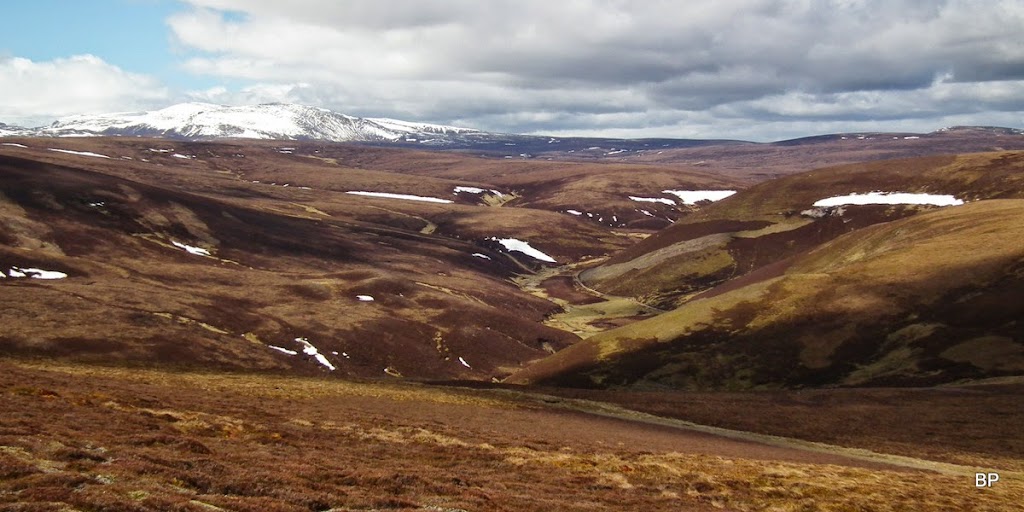 The main track climbs almost all the way to the Graham summit - it passes about 50m below the top of the hill. From the highest point, another track leads to the summit area. It's hard to get lost here 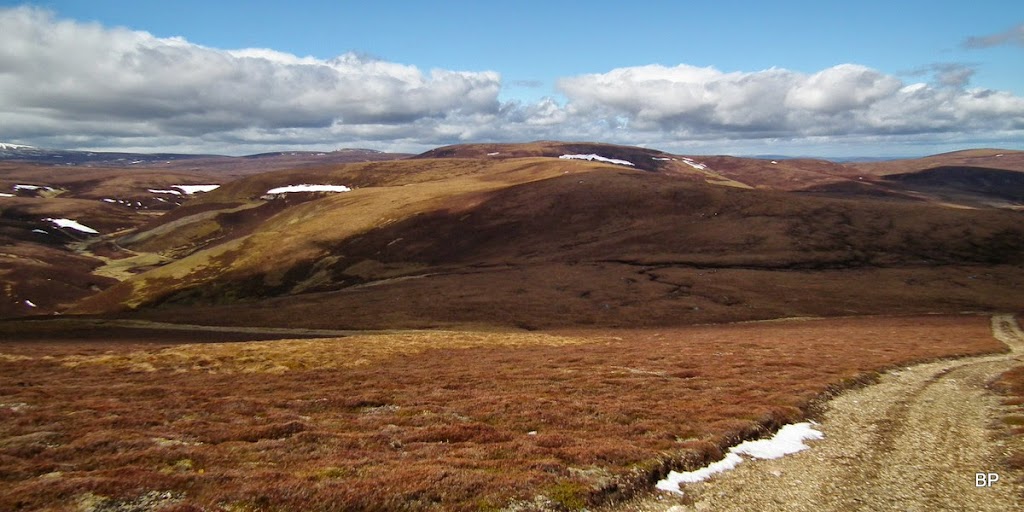 Looking north from just below the summit of Cnap Chaochan Aitinn: 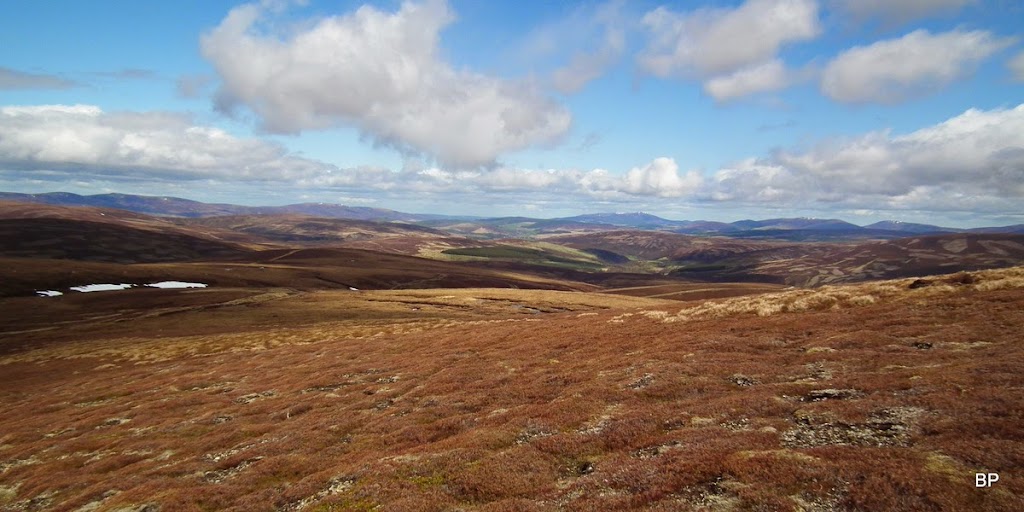 The top of the Graham is marked by a small but obvious cairn and some strange equipment, which I thought at first, was a weather station, but later we decided it was a communication mast of some sort, powered by solar panels and tiny wind turbines (one not working sadly): 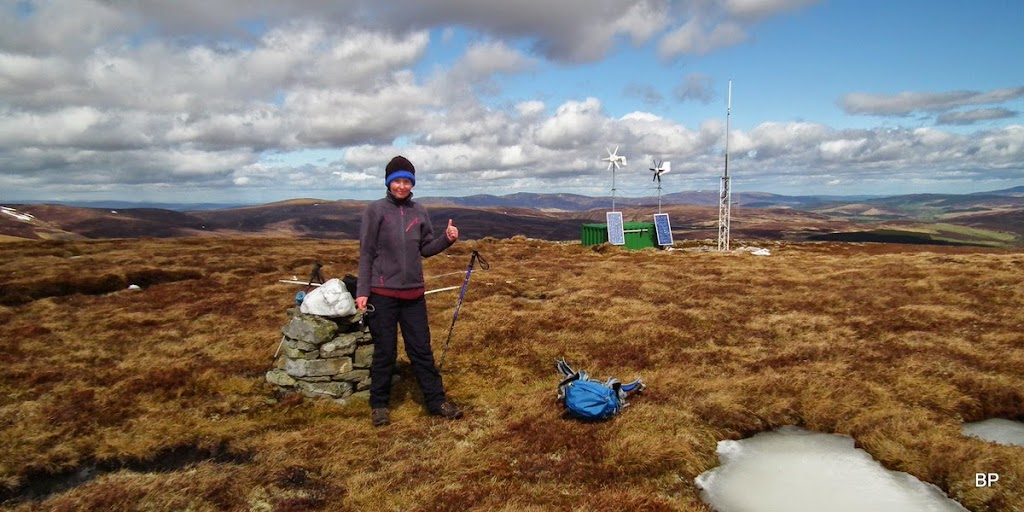 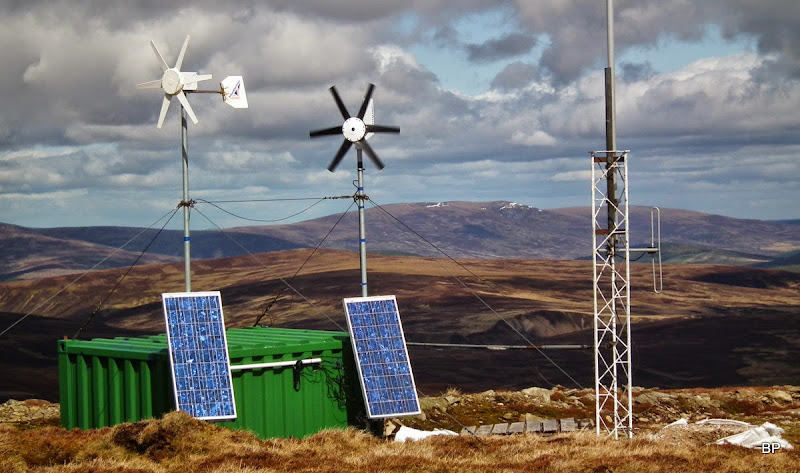 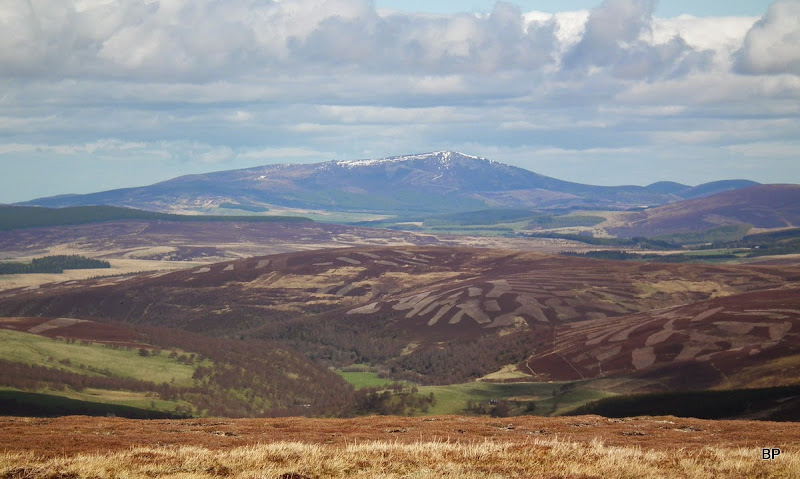 But of course, the main attraction of the day was Ben Avon! Cnap Chaochan Aitinn is possibly the best viewpoint to the Cairngorm giant and Kevin couldn't miss the opportunity for a lengthy photo session!

Such a mighty mountain! 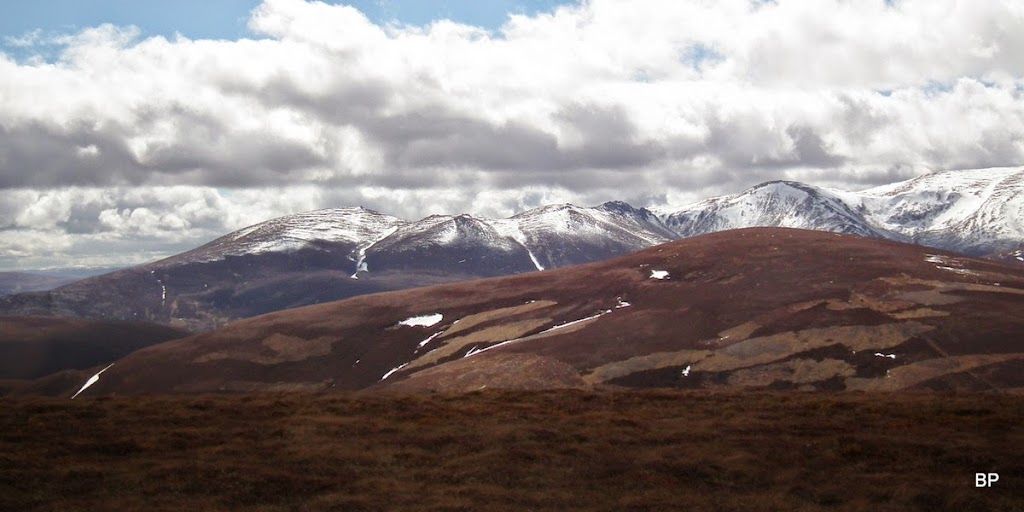 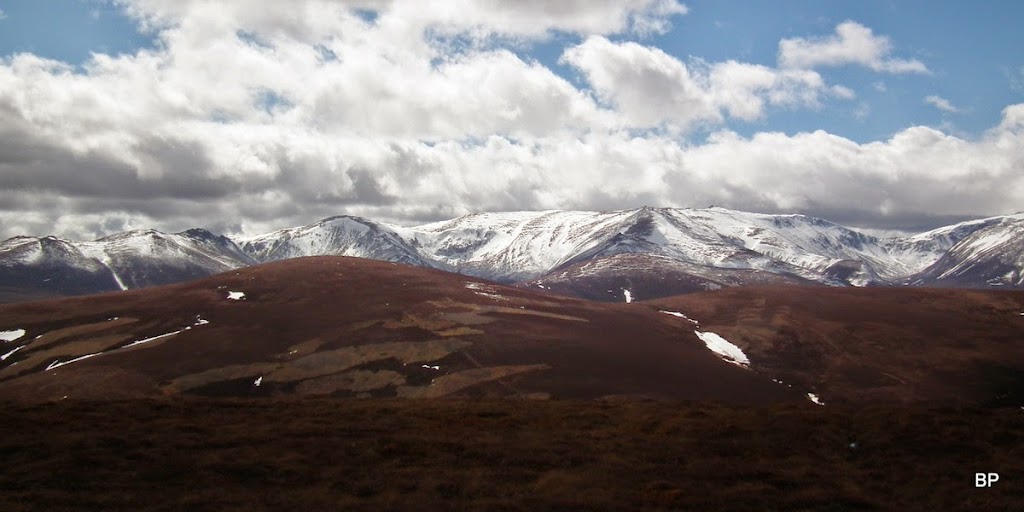 Simply stunning - and still a challenge for us! This is the last Munro this side of the Cairgorms, we haven't climbed yet. I can see this Tomintoul cycle-in coming! As soon as the snow thaws...

Kevin on the summit, grinning against the light 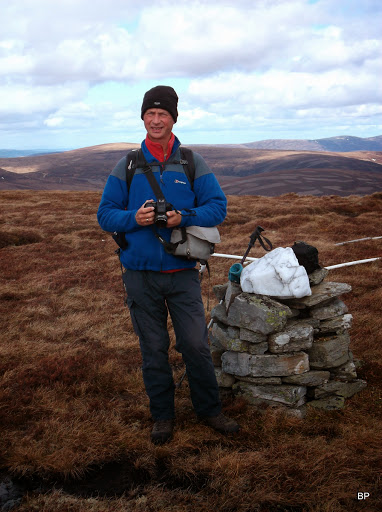 A few more details of Avon ridge - such a great white giant: 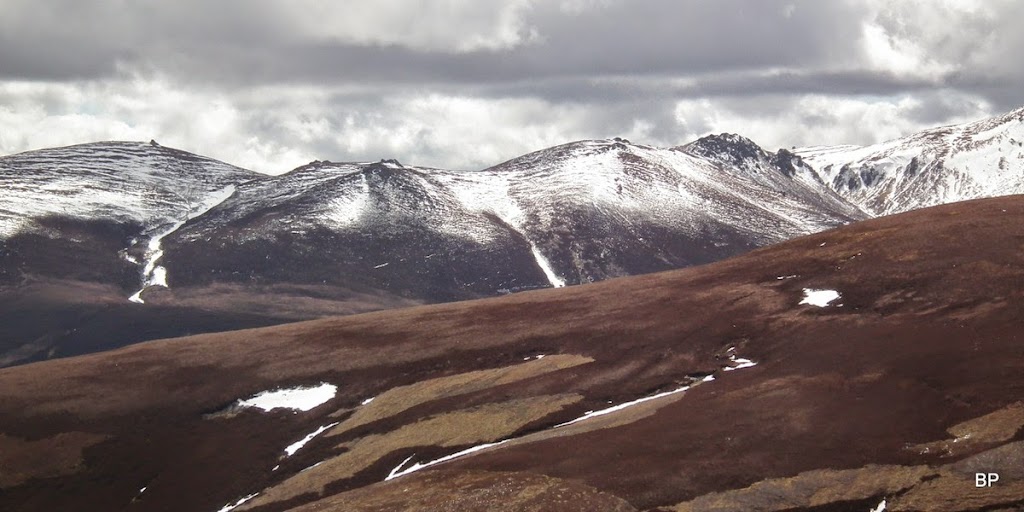 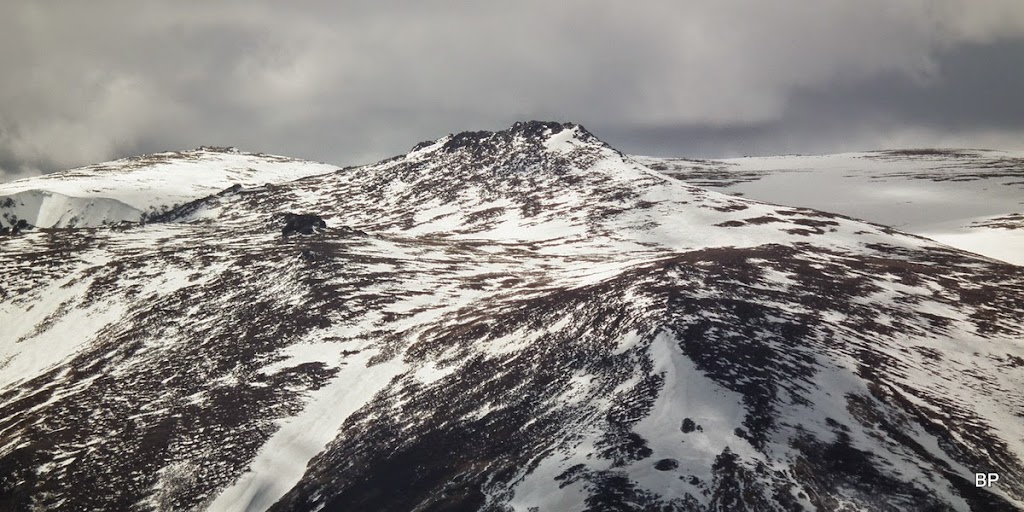 Other Cairngorm hills are not as prominent (Ben Avon certainly steals the show here!) but we identified Beinn Mheadhoin and Ben MacDhui behind it:

And this must be Beinn a'Chaorainn:

Zoom to the Barns of Bynack: 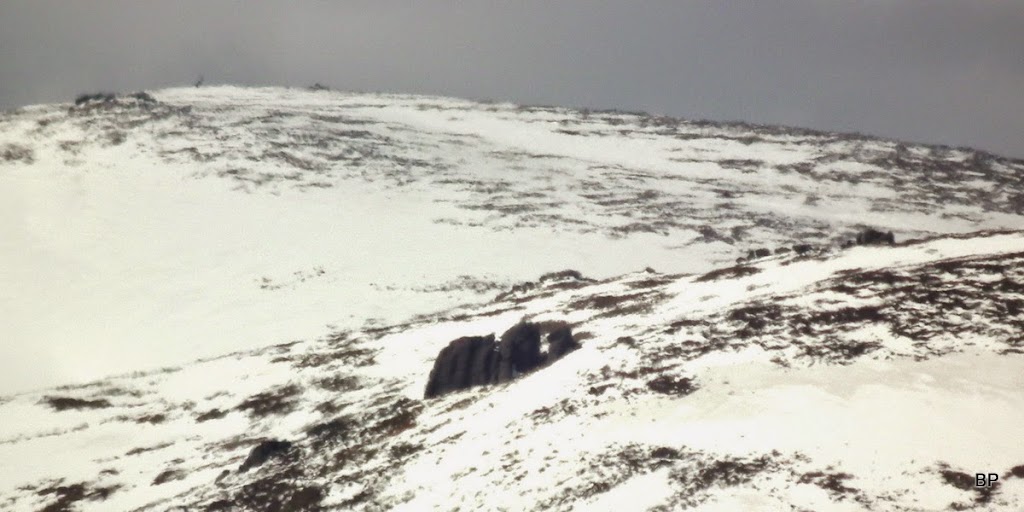 It was quite windy on the top of the Graham, so we found shelter behind the whatever-it-is communication building for a quick cuppa and snack, and then set off on our way back to the glen. It is possible to do a longer circuit here (as suggested by WH description) and we will certainly return to this corner of the Cairngorms on bikes, not only to bag the mighty Avon.
We were back in the car park after five hours of walking (the tracks really help to keep a good pace) and enjoyed the experience very much

An easy Graham to do for anybody, would be even better in winter conditions. Highly recommended - it's one of those hills with undeservedly bad "boring" reputation, but on a good spring day like we had, a must-do for any Graham Bagger

As I want to keep my reports in chronological order, with my next one I'll move on to Munros for a change

Nice one BP, thanks for bringing this Graham to my attention - will maybe try this one in winter as it's not far from me in Aberdeenshire. The terrain looks like the dogs dream as it'll likely be heavily stocked with grouse so out with nesting season is a must as my two have natural untrained talent for springing game birds as their breed name suggest

Another handy report BP as was thinking of visiting this Graham this year! I did Ben Avon from this side to save on driving round the other side, and can thoroughly recommend it.

was a lovely cycle up the glen and the walk was straightforward.

Beaner001 wrote:Nice one BP, thanks for bringing this Graham to my attention - will maybe try this one in winter as it's not far from me in Aberdeenshire. The terrain looks like the dogs dream as it'll likely be heavily stocked with grouse so out with nesting season is a must as my two have natural untrained talent for springing game birds as their breed name suggest

It's a good one for winter if snow is not too heavy, may look like a long walk but the tracks make it quick

There is grouse everywhere, we scared dozens of them and they scared us, too (why do they always have to wait till the last second to fly away, with that annoying trrr-trrr noise?). Maybe not the best route for lively dogs in spring, as the track crosses a few pasture, lots of ewes with little lambs.

SAVAGEALICE wrote:Another handy report BP as was thinking of visiting this Graham this year! I did Ben Avon from this side to save on driving round the other side, and can thoroughly recommend it.

was a lovely cycle up the glen and the walk was straightforward.

We have exactly the same reason for tackling Avon from this side - it saves us hours of drive and a few gallons of petrol. I know there is a path up Carn Fiaclach and the cycle-in looks a cracker

We haven't done any "Munro cycling" for a while, time to clean the dust off our bikes