We were going to do the ‘middle three’, all being well so drove to the hostel, our starting point. Why I always seem to faff about when getting ready I don’t know, but no more than a few paces from the start I realised that I’d left my camera in the car – near disaster for me as my pics are my souvenirs and memories.

Now Paddy may only be a few years younger than me [and a little older than Neill], but I swear he never so much as puffed on the way up. It was just as well that Dave [about the same age as Paddy] is super fit – he barely broke into a sweat and chatted with Paddy as if they were out for a stroll in the park. Meanwhile Neill and I needed every molecule of oxygen available – chatting was out of the question. Neill on the way up The way up - across the face on the left Nearly at the top - looking back to Loch Brittle

Still we made it to a point just below the summit of Sgùrr na Banachdaich in good time [for Neill and I]. Here we left our packs and walked on a little further to the summit and the views that I had waited many years to see. Ever since I did Geography O Level and we studied Loch Coruisk I wanted to see it and the Cuillin. They didn’t disappoint. It was greyish and hazy, but the views were stupendous. There were quite a few at the top; I suppose that after 3 days of being ‘out of bounds’ everyone who could was making it on to the Cuillin, including the poor guy who tried [in vain] to get us to pronounce ‘Sgùrr na Banachdaich’ properly (the one in the blue Paramo jacket behind us) on Thursday night in the Old Inn. Paddy, Dave & Neill on the summit of Sgùrr na Banachdaich 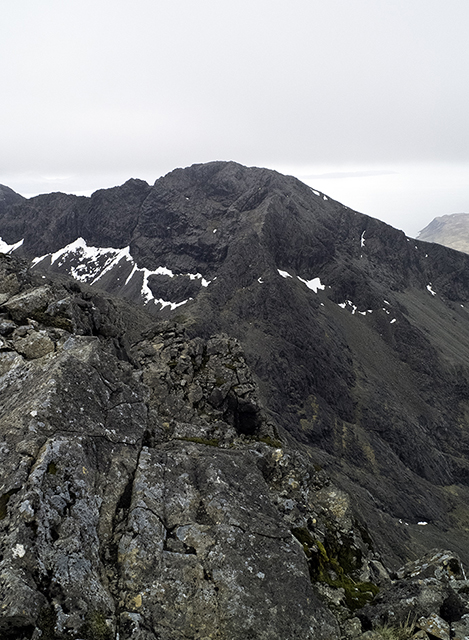 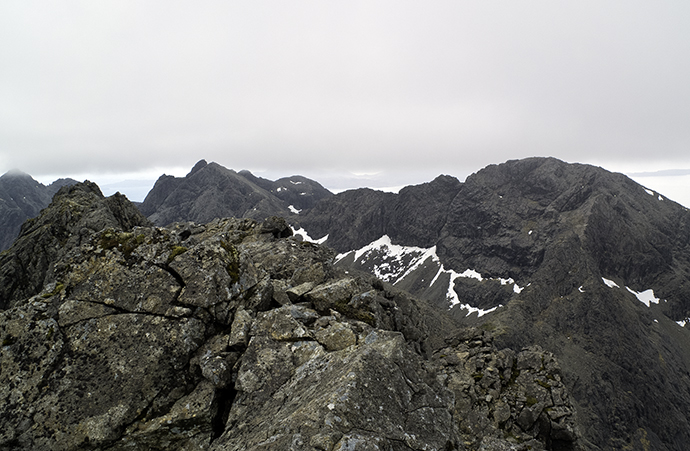 After taking the obligatory summit pics we returned to our packs for a very welcome lunch – my porridge had worn off about 300 m below.

It was then ‘on’ with belts [in case we wished to be roped together] and then following Paddy along the ridge towards Sgùrr a’ Ghreadaidh. Having Paddy lead the way and point out any potential difficulty or hazard really took the pressure off – I have never felt so relaxed when scrambling. In no time we were over Sgùrr Thormaid and summiting Sgùrr a’ Ghreadaidh. This was brilliant – we were enjoying every moment. After more pics we set off for Sgùrr a’ Mhadaidh. We hadn’t gone far when an eagle was spotted; then two; then four! They soared above us, dived below us, flew through the cleft in the ridge (An Dorus) and back again before the two pairs glided off in separate directions. This was the icing on the cake – what a day! One of the eagles

Once across An Dorus we left our packs behind and continued the short ascent to the top of Sgùrr a’ Mhadaidh. The weather had been getting better all day and by now the air was clear and the sun out, painting the glen leading to Loch Coruisk in a patchwork of light and shade. Bla Bheinn stood out magnificently. Towards the northern Cuillin I was sorry to leave the top, but time was passing and Paddy led us off the top, back to our packs and second lunch. Paddy leading us down It was then down into the stone shoot of An Dorus and carefully making our way towards Coire a’ Ghreadaidh. Quite how Paddy manages to walk down without so much as disturbing a pebble and we’re slipping and sliding I don’t know – perhaps he knows each and every rock, stone and pebble intimately. Once off the scree we were able to shed some layers and take off belts and helmets. It was warm in the late afternoon sun. The way down from An Dorus Then a steady walk back to the hostel. I could feel myself gradually running out of energy with every step despite the energy drink I glugged on the way down. Still, down by 5:30 pm which I felt was very respectable. Brilliant day. Safely back at the car!

Superb. Enjoyed your other reports too, but this one is the icing on the cake I think. Combining these 3 is an outstanding trip.

Enjoyed that and giving me withdrawal symptoms

Didn't do any bum slithering so I'm not sure - we did walk along one very narrow bit, but we were blessed with a windless day so we all felt quite secure.

That he is - I was in awe - I know he does this quite a bit, but he doesn't get tired and does it day after day - his knowledge of the routes is almost photographic. We too are hoping to return next year - hopefully the weather will be kinder to us all