I have been trying to think of a witty title for this walk report but didn't think "four middle aged women and a pack reindeer go up a hill" really had quite the ring that I was looking for.
Last year at the late May Bank Holiday weekend we had a Santa family outing to Glen Lyon with a friend who had never ventured further into Scotland than Edinburgh. We had a great time and promised that next time we would show her Glencoe.
She went out and bought the map and promptly told us hers was faulty - it had too many orange lines on it!!
Aha, we said, wait till you see Bidean and the Lost Valley. But unfortunately late snow at the head of Coire Gabhail put paid to that plan and we opted for some more modest but still fabbie hills.
This time Coldwetandhungry now being 16 years of age had a better offer, so five of us (me, Rudolph, Shish and two friends) set off from Shish's house in the Borders on Saturday morning with a fine sense of anticipation and excitement. It was a beautiful day when we set out, and a lovely drive up past Edinburgh, through Callander and on to Crianlarich. Unfortunately the weather forecast was correct and it didn't last, but this did not dampen our enthusiasm for the first Munro trip of the year.
We stopped at the Real Food Cafe for lunch (of course) and ate far too much (of course). The drive up from Tyndrum up and over the Black Mount always fills me with excitement, and we stopped at the appropriate layby at around two o'clock, where we met and had a wee chat with Nathan79 (good to meet you, Nathan)
Below is the GPX track recorded on my Etrex 10. As you can see we were helicoptered in and started halfway up the hillside. Well no actually, I forgot to switch the machine on. Drat!

Buaichille Etive Beag.gpx Open full screen  NB: Walkhighlands is not responsible for the accuracy of gpx files in users posts
As we plodded up the hill it would be nice to say the views were opening up, but sadly it was not true. It was pleasant enough and we could see the Aonach Eagach and views over to Stob Coire Sgreamhach, but the cloud was gradually getting lower. Rudolph had a huge rucksack and was carrying a lot of the group gear, we hoped this would slow him down somewhat so that I could keep up! 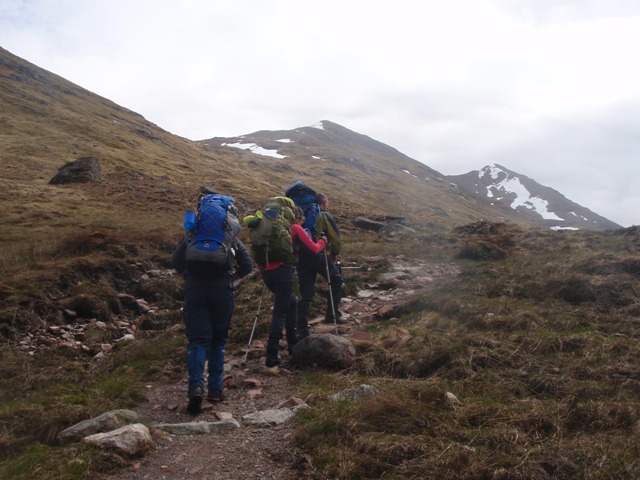 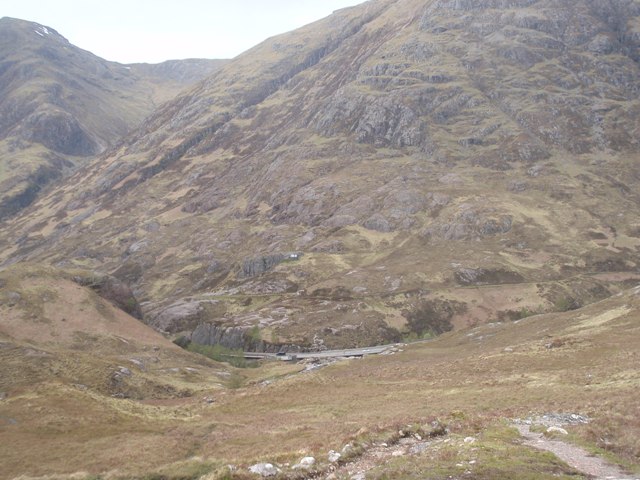 looking back down to the road, an amazing feat of engineering bridging the gorge. 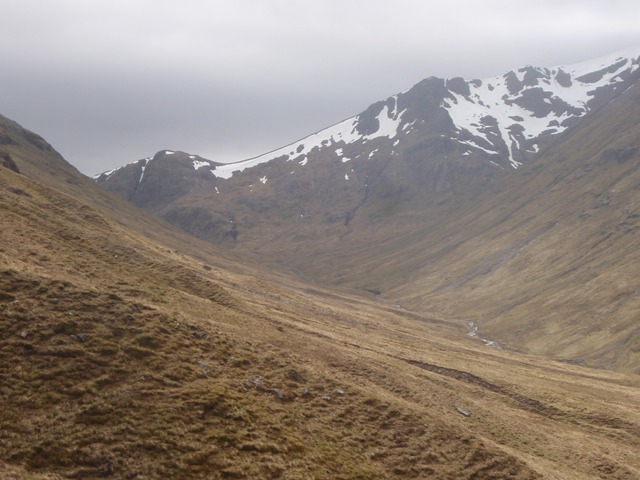 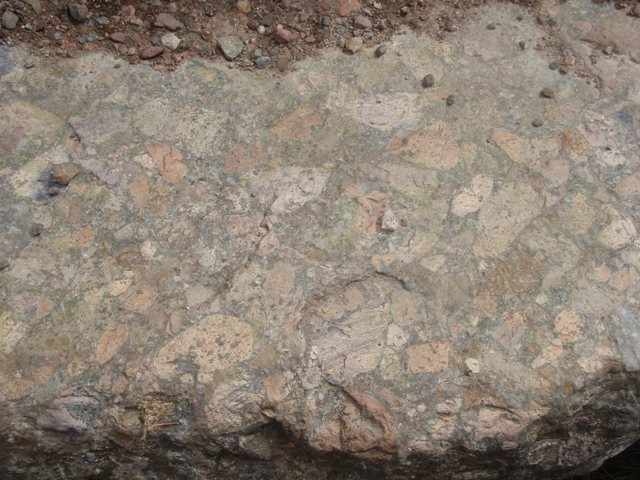 One of many varied and interesting stones on the path 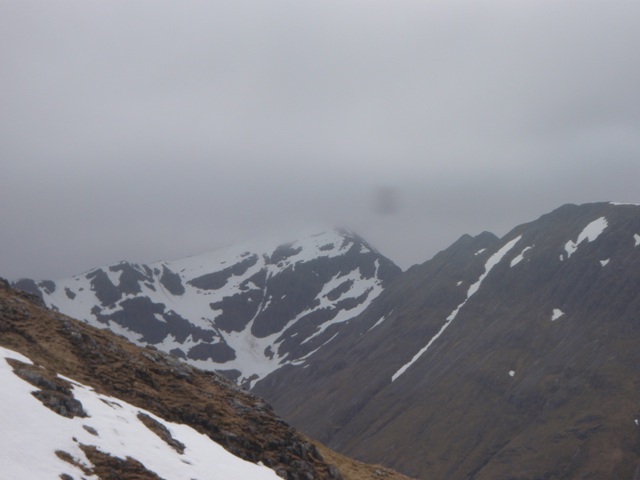 We found a reasonable camp spot just below the bealach and dumped the camping gear, taking some water, snacks and clothes with us. We tackled Stob Dubh first, and could almost make out the lovely view down Glen Etive from the end of the ridge. There was one small snow patch to cross on the way up, but it was soft and easily managed. Rudolph enjoyed messing about in the snow. 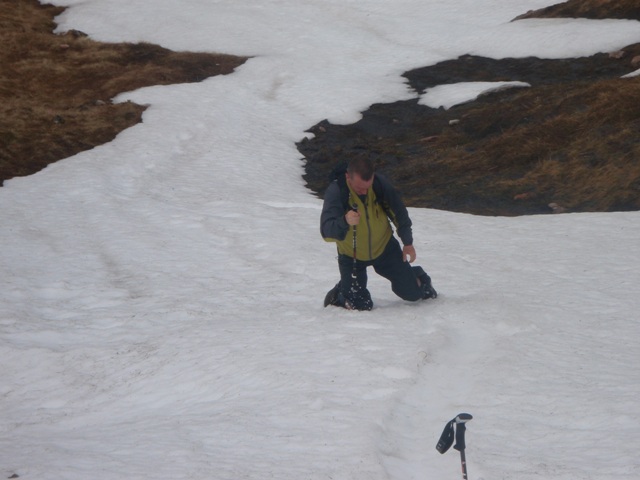 This is the point at which Rudolph realised it would have been a good plan to zip up the vents on his trousers! 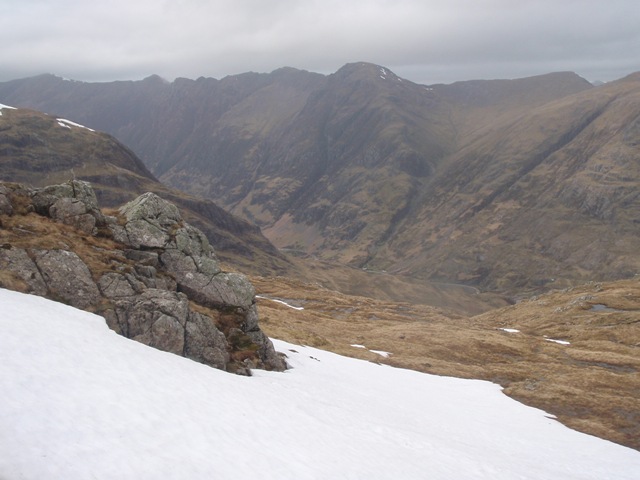 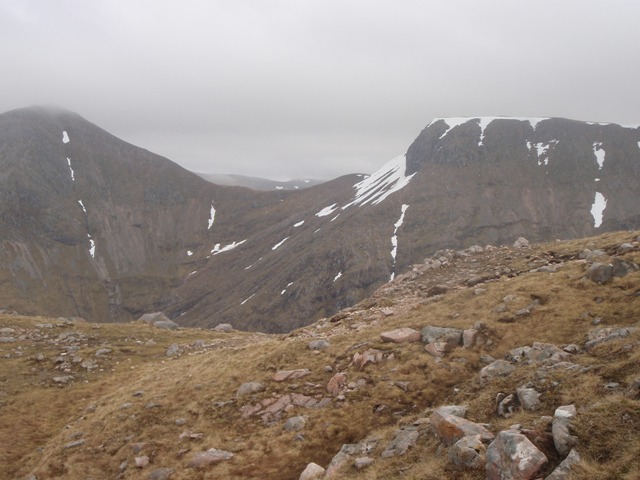 Then we went up Stob Coire Raineach. As we reached the top it started to rain and we came down to our tents without hanging about. 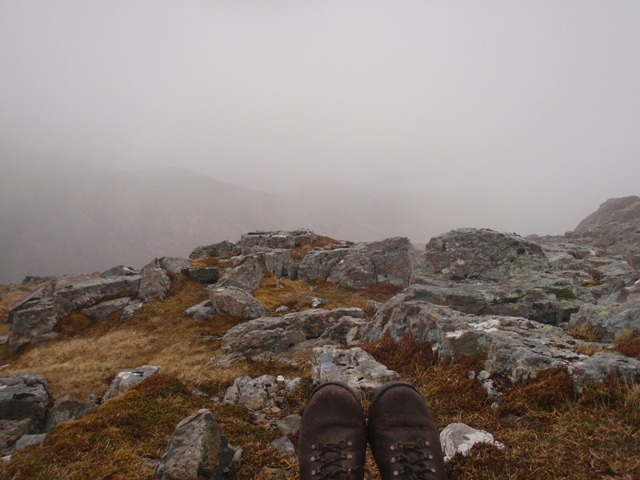 there is still a little bit of view from the top

We had three tents, one three person and two one person tents. Rudolph had brought a single skin bivi tent (home made) and he pitched it quickly but left his sleeping bag in its drybag while we all piled under the flysheet of the three person tent.
The rain and wind was really blattering us by this time but we were cosy enough eating our nuts and passing round wine in a melamine glass. Following this with Spaghetti Bolognese, Goulash and a pudding of chocolate custard (not recommended) we enjoyed a magnificent repast.
Rudolph's tent was a cause of some consternation. We had another night to camp after this and he could not afford a wet sleeping bag. Options were to go back down, send Rudolph back to the car for the spare tent, give it a try, or put four of us in the three person tent. He initially thought it would be ok but as we were all settling to bed a wee voice said "have you got room for one more?" It was certainly cosy, and we all did get some sleep, even if a bit cramped.
The wind and rain blattered us all night and we stayed snug in our sleeping bags for as long as we could, waiting for some improvement. We ate our breakfast WITHOUT a CUP of TEA - a fact which I mentioned a few times on the way down the hill. But fortunately the rain stopped, shafts of sunlight started to break through, and by the time we reached the car it was turning into a lovely day, ready for the next adventure. 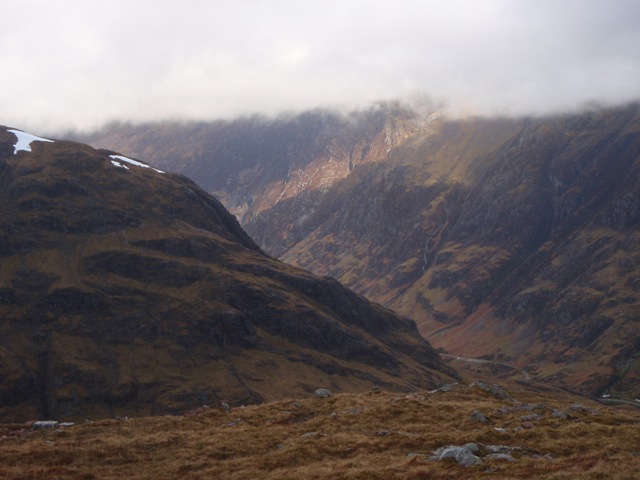 shaft of sunlight with the clouds hiding the Aonach Eagach 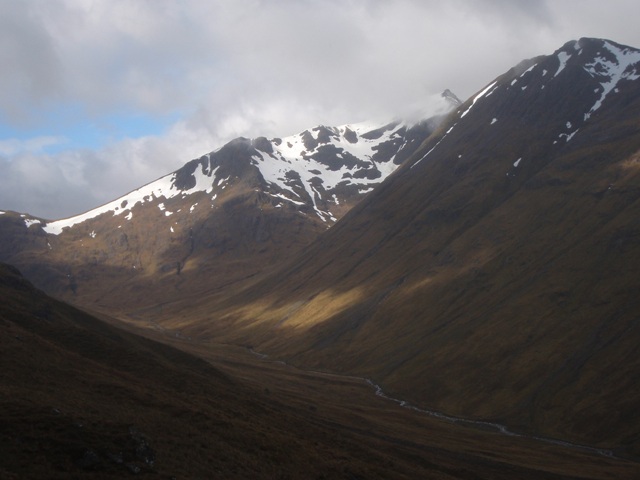 Cloud lifting off the tob of Stob Coire Sgreamhach 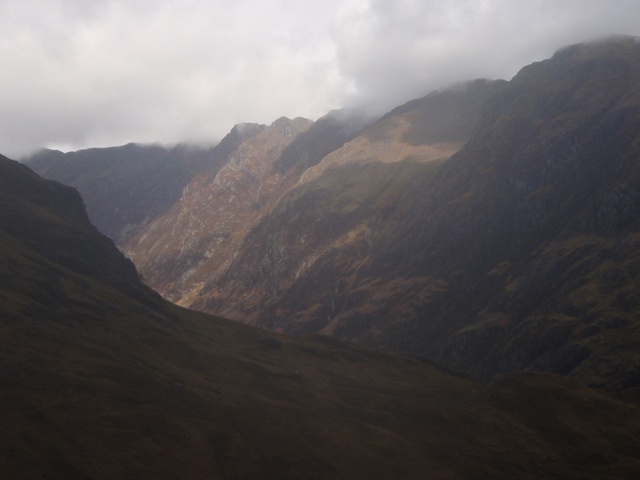 So on we went to Glen Nevis with another two blue balloons to our names.
.

Wine? WINE??? Do I get the feeling you are not taking this seriously

Aw, shame about the weather - recurring theme this May though. Kudos to Rudolph for being the pack-horse! Really enjoyed reading this but didn't see the mugs anywhere????

Never had wine on a hill before, but it was rather magnificent! Platypus do a special bag for holding wine! One bottle of Cabernet Sauvignon between five fair cheered us up!

AnnieMacD wrote:Aw, shame about the weather - recurring theme this May though. Kudos to Rudolph for being the pack-horse! Really enjoyed reading this but didn't see the mugs anywhere????

no I nearly forgot to take a picture of the mugs altogether! although we have one on the next report.

Good to see you back in usual indomitable style despite the weather!

it was indeed proper weather!

dogplodder wrote:Good to see you back in usual indomitable style despite the weather!

thank you. We are aiming for Knoydart in 3 weeks. So looking forward to the gentle breezes and sunshine. I'm counting the days!

Personally I thought the wine was THE most essential piece of kit.