Fresh from Buaichaille Etive Beag we had another exciting adventure in our sights.
Shish and her pal did the Ring of Steall last year but still had the two Western Mamores to climb.
Rudolph and I had one Mamore left - Mullach nan Coirean - and it looked like it had a nice ridge to go up but not too scary for our friend who does not like steepness and exposure but is willing to learn! - and she brought the wine!
So Mullach nan Coirean it was to be, with the option to continue to Stob Ban if the weather and our energy/inclination took us there.
We parked at Achriabhach in Glen Nevis where there was just enough room for our two cars to get off the road at the bottom of the forestry track. A little further on there is an "offical" car park which is Pay and Display.

Mullach nan coirean.gpx Open full screen  NB: Walkhighlands is not responsible for the accuracy of gpx files in users posts
There was a sign up telling us of a path diversion through the forestry due to felling operations - but it actually asked us to go the exact route we had planned which was nice, especially as it was handily signposted!
The path climbs up by the side of a beautiful burn through the forest to reach the track. It then turns right along the forestry track without climbing much for a km or so. Then another nicely made path climbs through clear felled forest then into some lovely open birch woodland before coming out onto open moorland at a very high stile.
From there the path becomes indistinct, boggy and steep while following the line of the deer fence up hill onto the ridge. At about 450 metres there is a nice flattish bit where there is a spring, and this is the last water before reaching the ridge. We dumped our camping gear here, and this time Rudolph had brought a proper tent for himself. 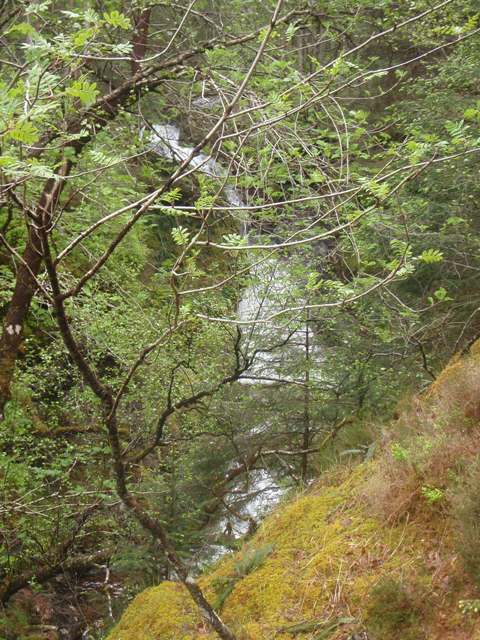 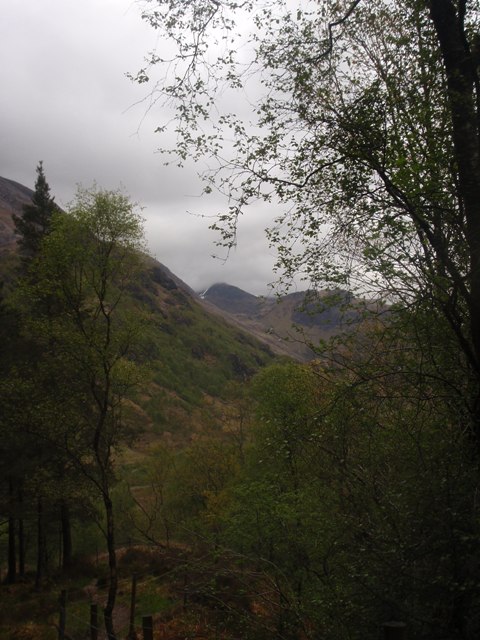 looking through the trees up Glen Nevis 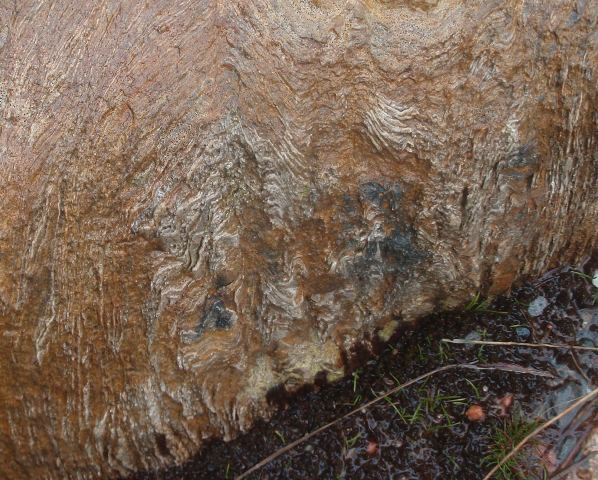 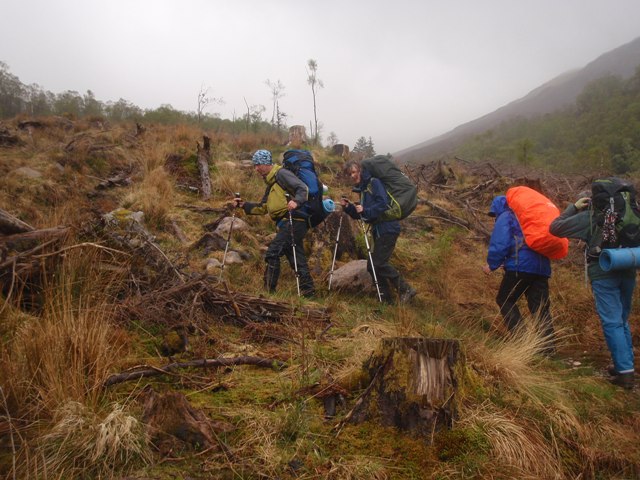 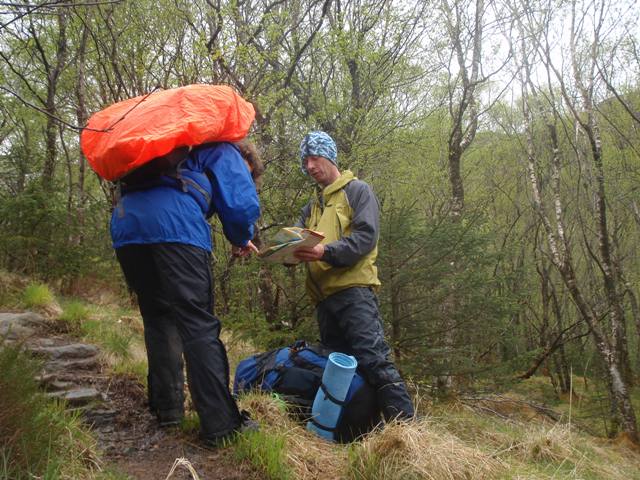 looking at the map

Rudolph and I took rucksacks with us and the rest stuffed their pockets with food and we continued up the ridge. The views up Glen Nevis were lovely and the cloud base was gradually lifting but the Big Ben was not playing out today. 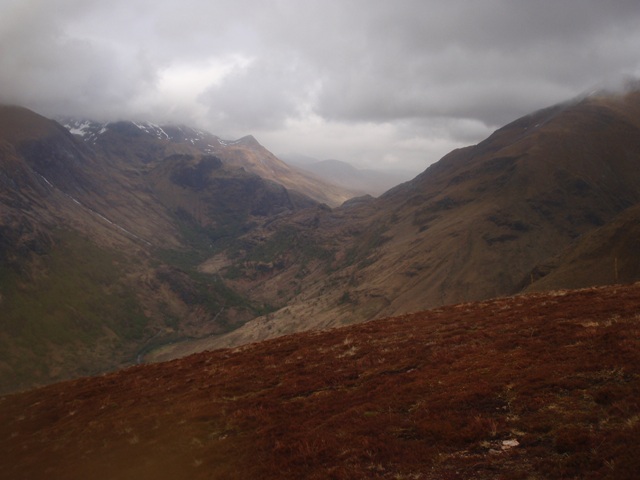 The ridge gets gradually narrower and stonier as you reach the summit, then suddenly you are on a big flattish area. There was a cairn not far from the top of the ridge which teased us, and we were arguing a little about whether it was the summit, but suddenly the cloud blew over for about 30 seconds and we could see an enormous summit cairn further on. 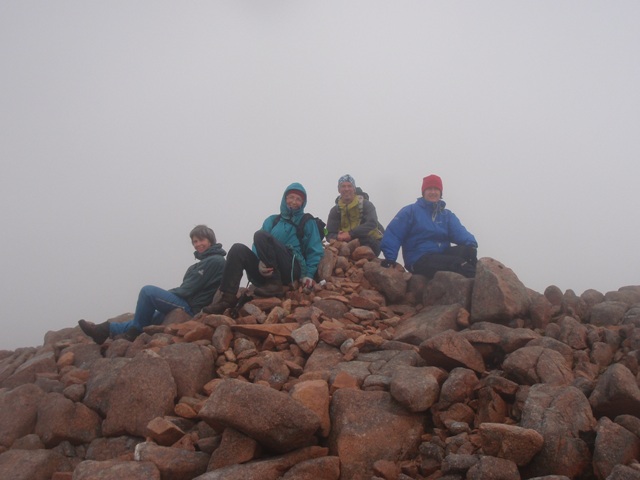 Cairn not on the top 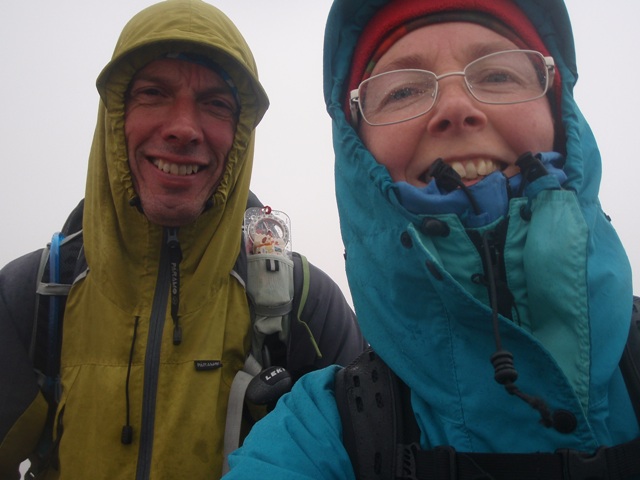 Selfie on the top of the cairn

At this point we decided we had climbed enough hills for today and we were looking forward to our tea. We did not feel the need of an extra ridge walk in clag and cold wind.
Coming down the ridge again was lovely and we were soon setting up camp and snug under the flysheet of the three person tent drinking wine (Merlot this time) and sharing blow-up chicken curry, pasta with cheese and fish with mashed potato, followed by Shish's delicious chocolate chip flapjack. 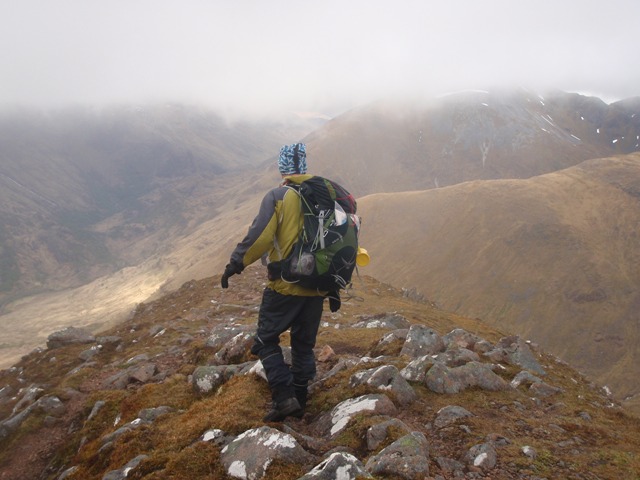 coming down the ridge 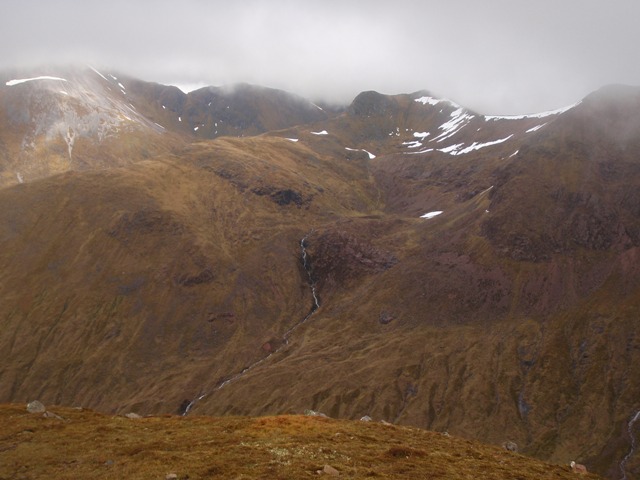 Coire nan Lochan on the slopes of Stob Ban 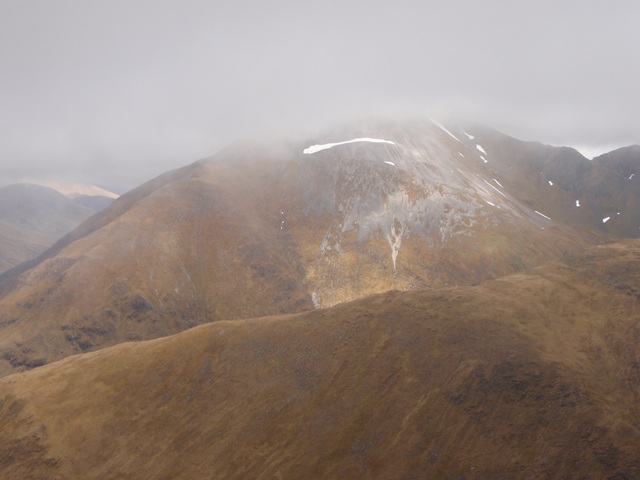 Sgurr a'Mhaim - or Scar and Maim as Shish calls it after the infamous long steep descent from the Ring of Steall.

Having four mothers of teenage and adult children in the party meant we had vastly over catered and we were all keen to share our snacks so as not to have to carry them down again. so we were very well fed when we snuggled up in our sleeping bags for the night. It was a bit blustery and rainy at times but much quieter than last night on the wee bookle and certainly I for one slept well.
In the morning it looked like it was set to be a lovely day. What a shame we had to return to Englandshire, so that I could go to work in the morning. 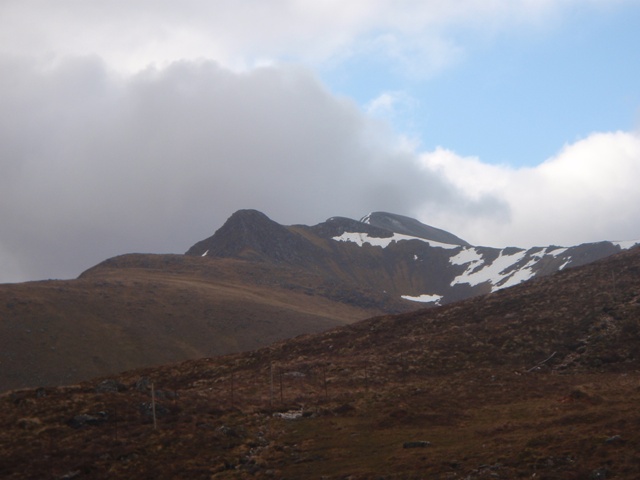 In the morning - Blue sky and the summit of Stob Ban visible. 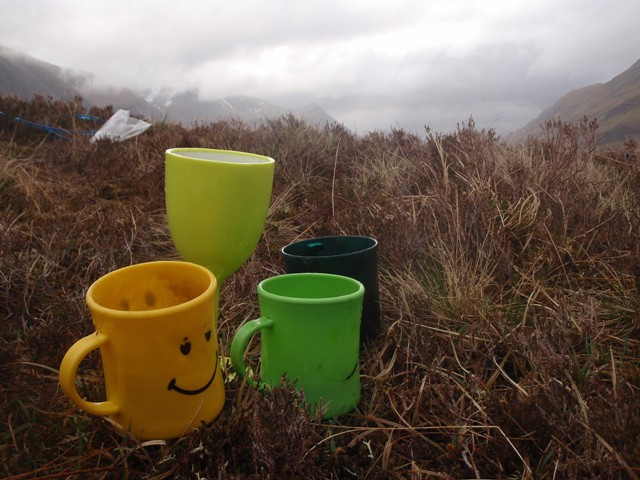 the Happy Mugs and some friends - Rudolph's is losing its smile :-( 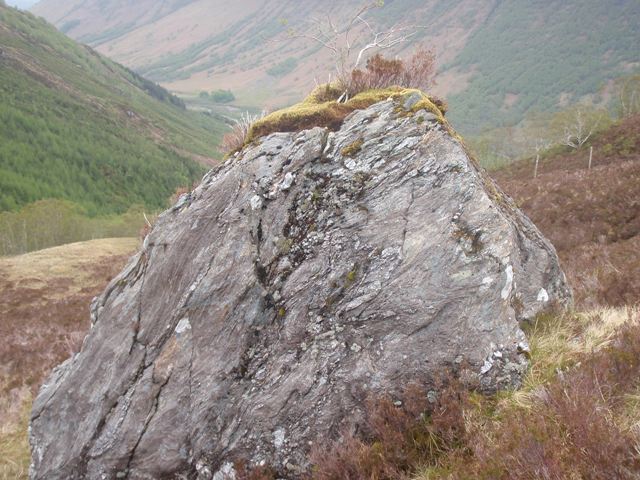 This time I insisted on at least two cups of tea - in fact I refused to get out of my sleeping bag without one, having had to go ALL MORNING the day before without any - cruel and unusual treatment I tell you!
But before we returned back South, we had time to take a quick walk up the Nevis Gorge to the Steall Falls and have a brew and a view of where we had been. 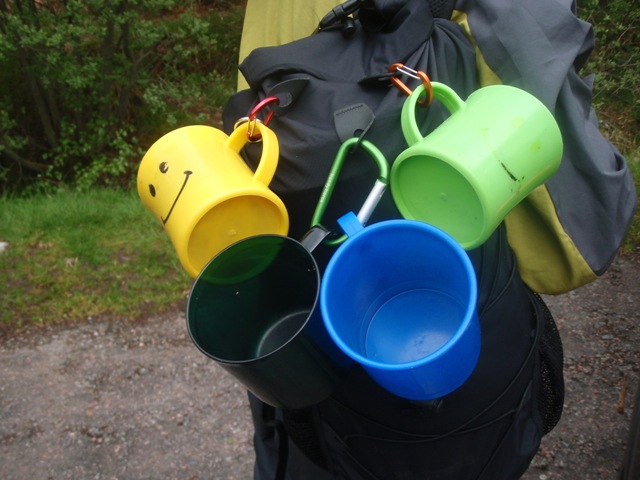 Rudolph carrying all the mugs 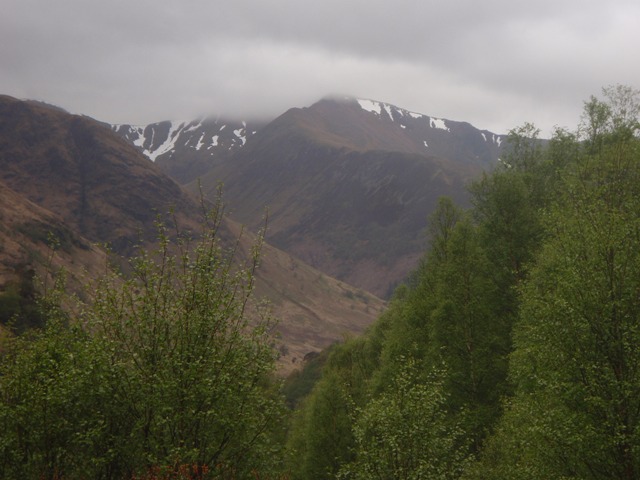 the ridge we walked up from - taken from near the car park at the end of the Glen Nevis road. 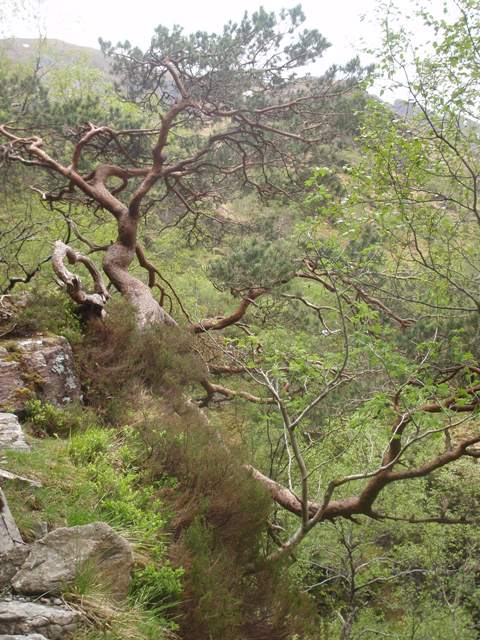 Pine tree hanging on to the edge of the gorge 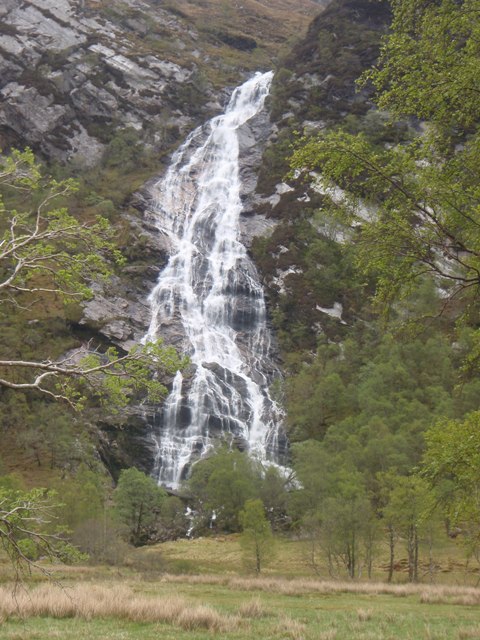 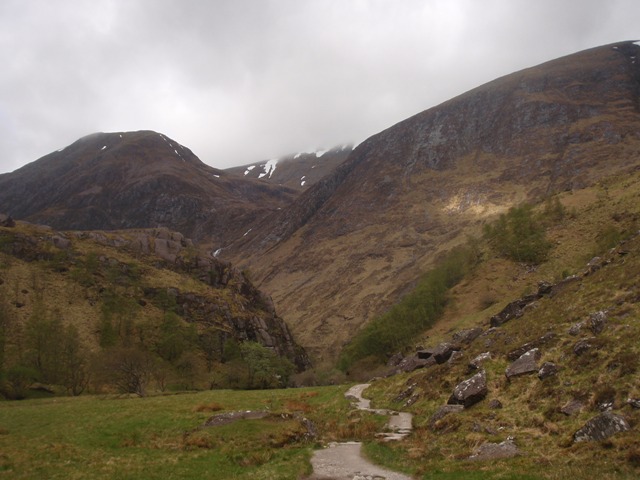 So off back to England we go - till the next time! See you in July!

Ah, happy to see the mugs! We WILL have good weather in July!!!!