Set to return to Tilt - Beinn Mheadonach and Beinn Dearg

Set to return to Tilt - Beinn Mheadonach and Beinn Dearg


People drool about Glen Tilt. They glory in its splendour and recommend a return time after time. So with a day to spare it was about time I made a visit. Beinn Dearg lurked unvisited, as did the other Munro at the head of the glen, Carn a Chlamain. But, fancying the look of the Corbett Beinn Mheadhonach as well, I decided to leave Carn a Chlamain for another day. If Glen Tilt proved to be half as impressive as I was lead to believe then it would be no hardship or penance to return.

With the bike in the back of the car I headed up the A9 and turned off for Blair Atholl and Old Bridge of Tilt. A clutch of cars had already disgorged people and bikes so I guessed I was not going to be alone on the hill. Gatehouse and entrance to estate road up Glen Tilt

Past the gatehouse and between the stone pillars, the track didn’t take long to steepen. It seemed ludicrously early to be off and pushing but there seemed little point in getting too tired so early in the day. I just hoped this wasn’t going to herald a rollercoaster route up the glen. Fortunately, the gradient relented within a couple of hundred metres and the remaining stretch up to Gilberts Bridge (sic – the OS don’t use an apostrophe so who am I to differ) comprised a gentler series of ups and downs along which a fair pace could be maintained.

With the bike chained to the fence just across the bridge, and not before checking to see if I was likely to get shot by long-distance marksmen on the rifle range, I went in search of the “diamond gate.” 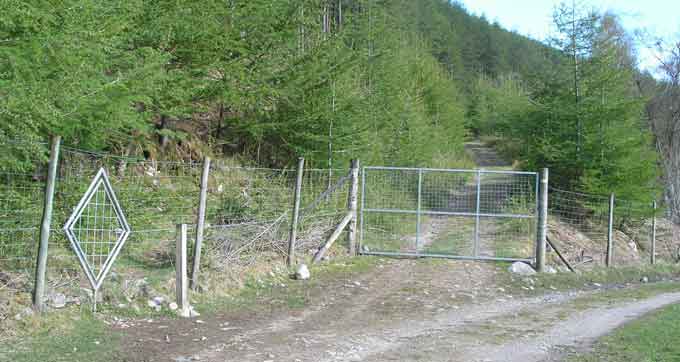 Once through this peculiarity, easy walking lead through the woodland to the site of old settlements and communities at Sean-bhaile Wood and the Ach-mhairc Bridge. The sturdily constructed bridge is testament to the size of the population that must have lived in the upper reaches of the glen before The Clearances. Today it, and its partner across the Allt Mhairc further upstream, stand as curious anachronisms for 21st century recreational walkers. The bridges, along with the tumbled outlines of ruined shielings and former homes, illustrate the investment of time and effort these communities must have made to facilitate their life, trade and travel. But today, apart from seeing a handful of cyclists heading up the other side of the glen for Gaw Bridge or the Forest Lodge, I was alone with their ghosts. Beinn a Chait and Beinn Mheadhonach from above the Allt Mhairc

Leaving the ruins behind, the track contours round into the trough of the Gleann Mhairc, with Beinn a Chait and Beinn Mheadhonach filling the horizon. After crossing the other ancient bridge I began the stead plod up the elongated southern shoulder of Beinn Mheadhonach. I didn’t succumb to the temptation of following any of the many parallel tracks in the heather that appeared to simply lead round and round the mountain. In a while, a spectacular cairn and shelter appeared on the skyline part of the way up and provided something upon which to focus. Above, the gradient gradually eased and then stretched out ahead. Cairn and shelter on south ridge of Beinn Mheadhonach

As summit settings go, Beinn Mheadhonach sits with distant horizons that made it feel the remote hill it is. On the other hand, as summit statements go, “underwhelming” rates as an over-statement. The southern, slightly lower top, presents a jumble of stones in the midst of a grassy expanse that could just as easily function as a marker cairn. Three or four hundred metres further north, even fewer stones mark the actual summit as if the Corbett was embarrassed to declare its status.

Don't get excited, it's not the top - southern top of Beinn Mheadhonach

Don't get too excited with this either - even though it is the top of Beinn Mheadhonach, with Beinn a Chait in the background

With the hill offering little or no incentive to stay or shelter from the now biting wind, I strode on. There was a fleeting moment when I gazed east to Carn a Chlamain and wondered whether I might just pop over and extend the day. A look at the map and realising that this would have involved a thousand feet down, up then down and up again, made me realise that “just pop over” was hardly an apt phrase. Instead, Carn a Chiaraidh, then Elrig ic an Toisich beckoned on the straightforward way round to Beinn Dearg . Although the prospect looked boggy, the threat of having to weave in and out of gloopy peat hags didn’t materialise. A boggy way across to Carn a Chiaraidh?

The earlier trough of the Gleann Mhairc was matched by looking down its parallel neighbour, the classically U-shaped valley of Gleann Diridh. A lazy, sheltered lunch taken between the two intervening tops and the delicate crossing of a band of old snow meant that the passage to the Munro was a gentle two-hour saunter. The day’s earlier brightness had now faded, and the threatened weather approaching from the north west could be seen on the distant horizon. However, there was still plenty of time to snuggle into the shelter formed around the trip point and enjoy a second spell of lunch and attempt to work out what stretched away to the north.

Carn Liath and Beinn a Ghlo from Beinn Dearg

The original plan had been to descend directly south off Beinn Dearg and to follow the Allt Slanaidh back into Glen Tilt. However, Beinn a Chait had been an attractive presence all day, and the horseshoe it and Beinn Mheadhonach formed around Gleann Diridh seemed an elegant and logical detour: a far more fitting end to the day. Carn Liath from Beinn a Chait

And so it proved. The additional height was easily gained and, while the top itself was as unassuming as the cairns on its neighbour Beinn Mheadhonach, the trip across it was a pleasure. The descent and slight rise over Elrig was neither knee-jarring nor boggy: what more do you need? In very little time the cluster of ruins on the western side of the Ach-mhairc Bridge appeared below and the River Tilt meandered its way through the wooded glen. Gleann Diridh from Elrig on the descent from Beinn a Chait

Legs were well and truly fired up by the time I reached my bike back at Gliberts Bridge and they made short work of the cycle back to the car. Maybe next time I visit, with Carn a Chalmain in my sights, I’ll linger a bit more on the way up and down the glen, possibly take the tent up and enjoy its solitude in the upper reaches.

Yes, I now appreciate the enthusiasm shared by those who have visited Glen Tilt, and no doubt, I’ll be back.

Glad to see you enjoyed Beinn Mheadonach, another underrated hill. We did it as a second option, when we found out Beinn Dearg route was closed due to stalking. The true summit cairn must be the smallest among all the Corbetts...

Carn na Chlamain is a good one for the bike. We walked up and back to the car park in 7 hours, so cycling would make it half day's adventure.

Another good one Nigel

I seem to be in the minority as I started from Calvine, think it is slightly shorter

Like you I dismount as soon as the track starts going up, in an effort to try and save the legs

I love the feel of Gleann Mhairc between the bridges on the approach to (or in my case walk out from) Mheadonach.