Poor Mona Gowan. Nobody takes her seriously. Graham baggers treat her just as a "nip up" on the way to/from somewhere else, or as a sidekick to Morven. The laziest way to climb this hill from the highest point of A939, over two intermediate tops, with total ascent of only 300m. At least that's what Graham Guide suggests as the best option

You could be back in your car in two hours or even less if walking quickly. WH route goes from the north and it's up and down the same way, it looked a bit boring to be honest.
We had done Morven from the east last winter, it was so windy we could hardly stand straight, so we gave up on any ideas of continuing to the Graham. So to do justice to Miss Mona (another hill that seems female to me, possibly because of the name) I was looking for some kind of longer route which would A. allow to take in all the lower tops as well, B. be circular rather than up and down the same path, and C. have no parking issues. All three problems were solved by starting from Glenfenzie, where there is an ample parking area just next to the bridge over Allt Glas-Choille:

It was a cloudy day and we were just trying to take advantage of some extra time off. Forecast was pessimistic, with heavy showers and high winds, so we didn't risk venturing over higher hills, especially that the cloud meant no views from over 900m anyway.
Better a Graham then nothing. Kevin getting ready to go: 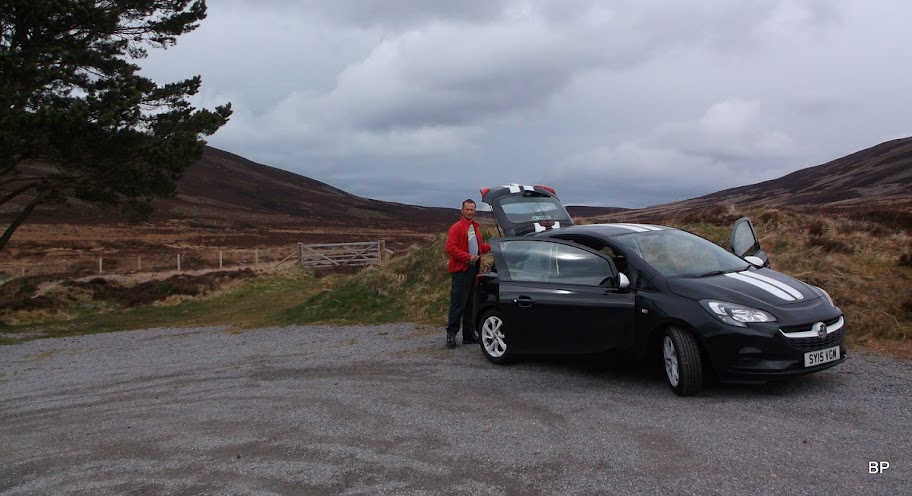 Track_MONA GOWAN 18-05-15.gpx Open full screen  NB: Walkhighlands is not responsible for the accuracy of gpx files in users posts
We walked up the tarmac road for a very short distance, to the track leading to the ruins of Glenfenzie. Here, we took some time to investigate the des res 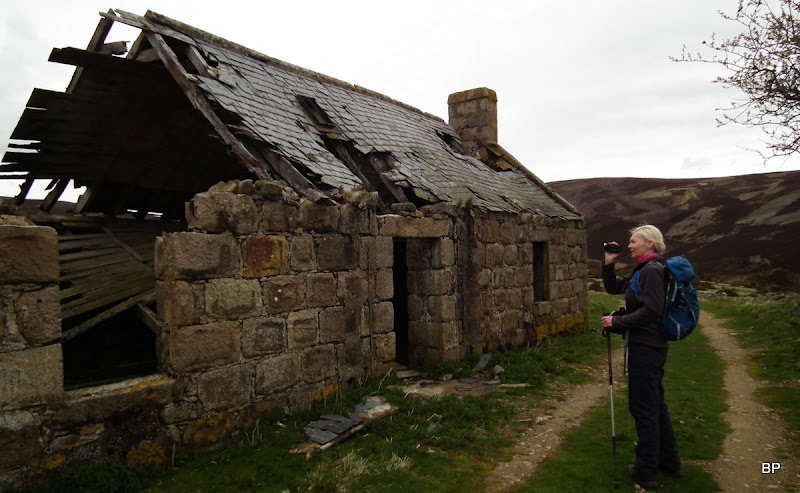 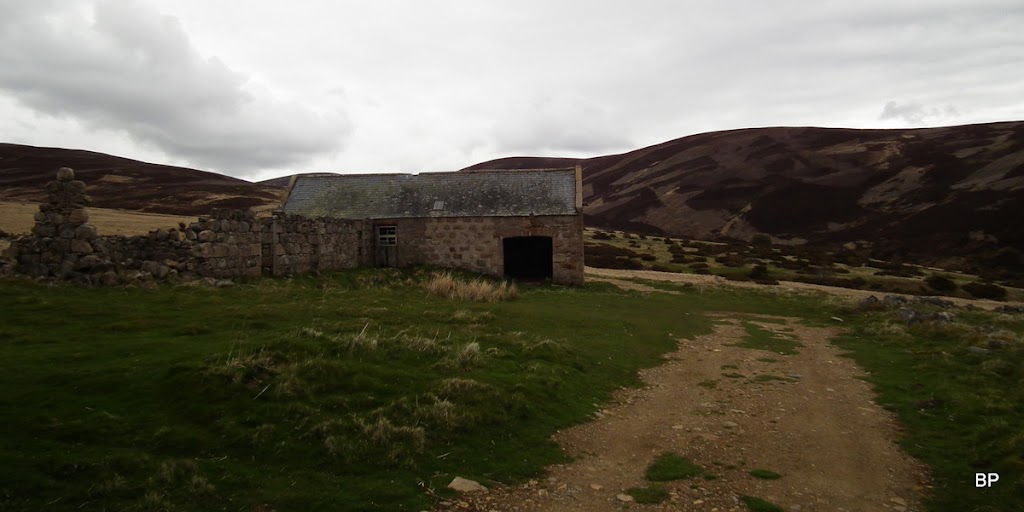 Glenfenzie ruins from the track, the summit of Mona Gowan behind to the left: 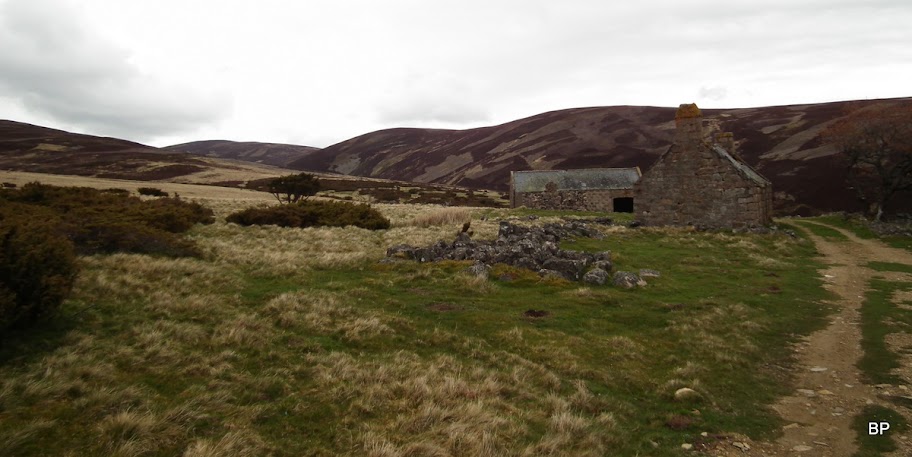 View along Glen Fenzie, with the pointy summit of Mount Keen on the horizon: 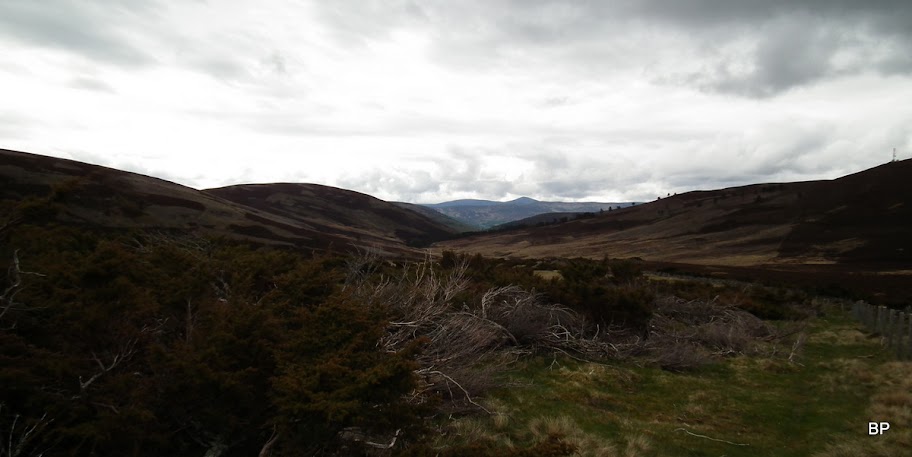 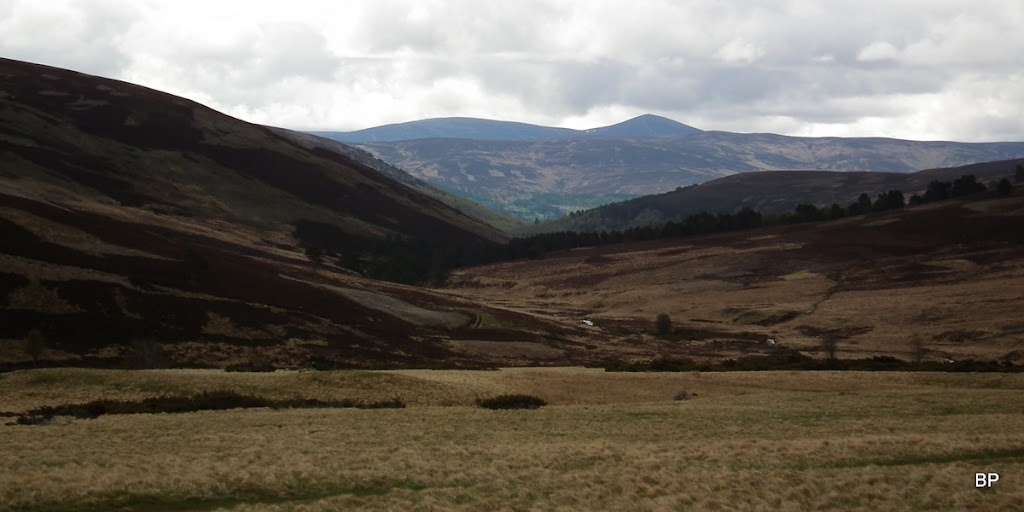 This will be our descent route - a new track descending from Scraulac: 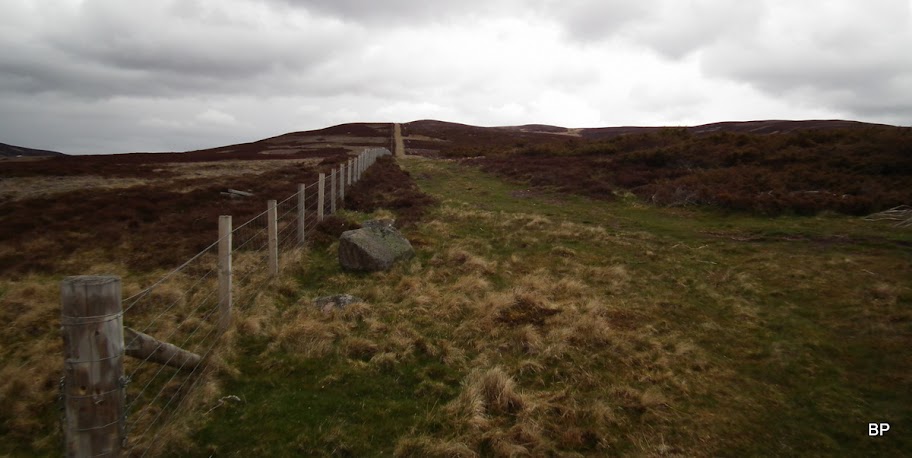 Blame the weather... When we started walking, we were sheltered from the wind by surrounding rolling hills, and the forecast rain hasn't arrived yet, but it was never going to be an experience to remember forever

A good track continues north-east from the ruined cottage, towards the middle of the three tops, Cairnagour Hill: 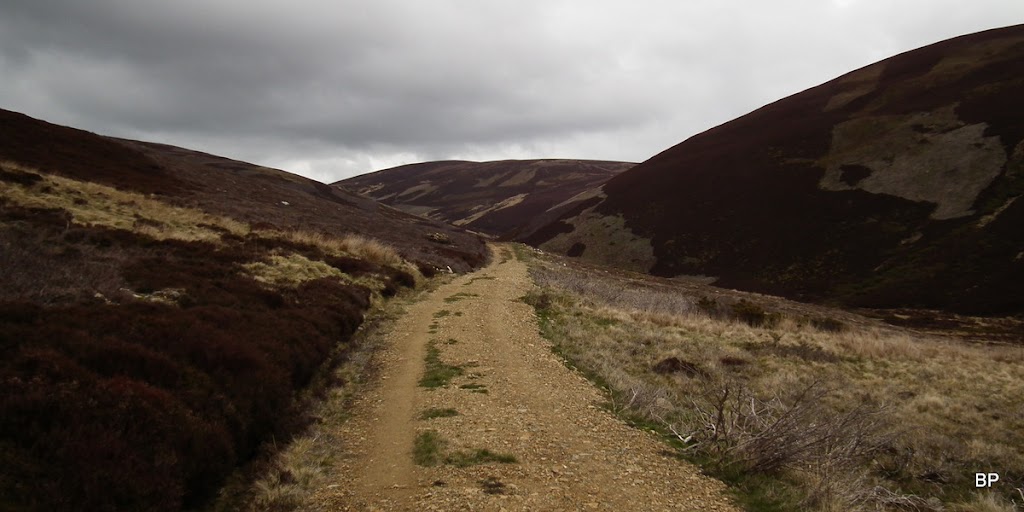 At 325042 the track divides, the left branch ascends Cairnagour, the right one climbs up to the col between Mona Gowan and Tom Liath: 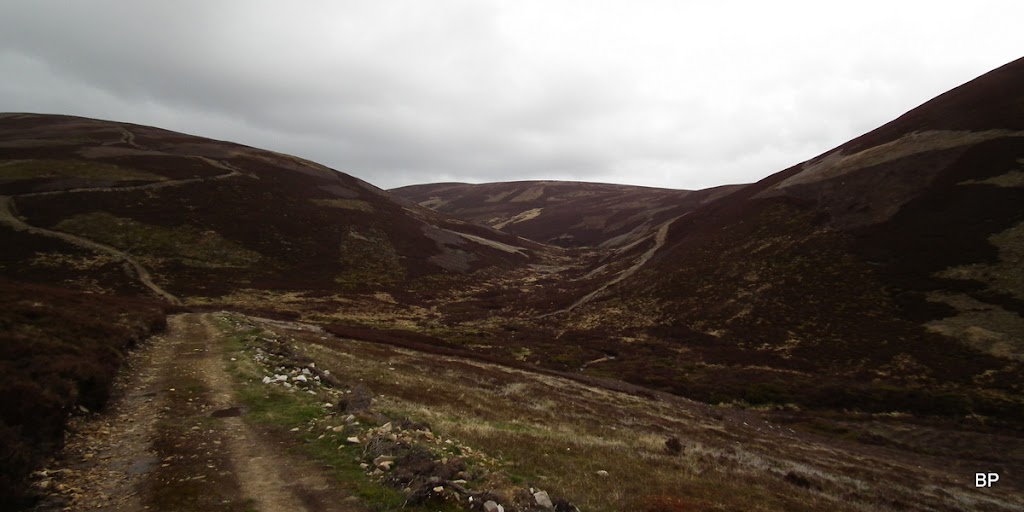 it was a bit of the yellow-brick-road experience, but the track makes up for quick marching and soon we reached the col. From here, there are good views east to the round bulk of Morven: 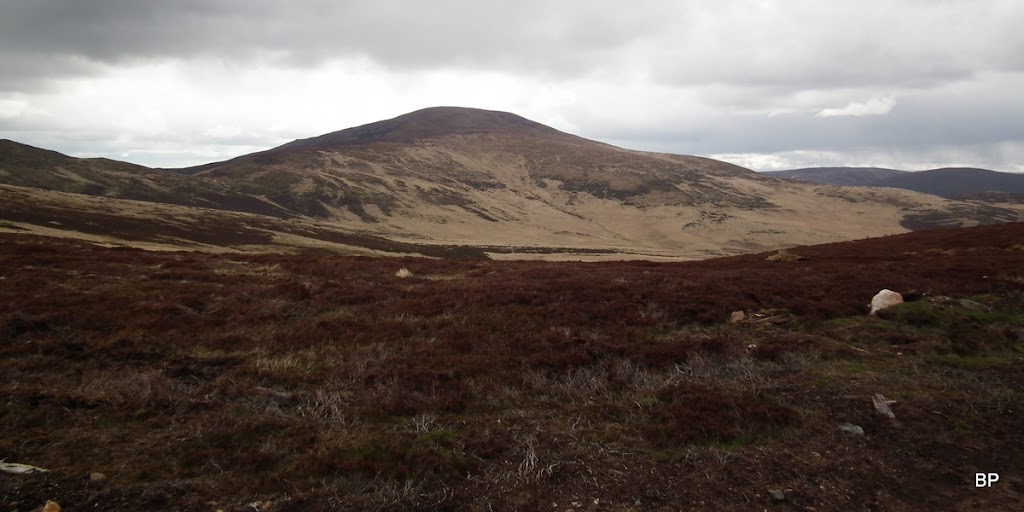 ...and the track continues along the fence up to Mona Gowan herself: 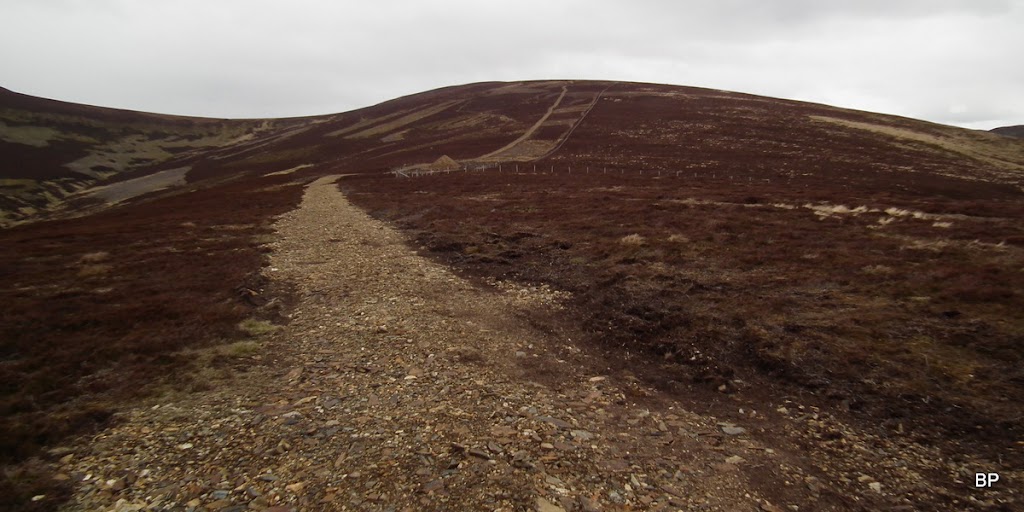 We kept going, hoping to reach the summit before it started to rain... A nasty cloud was coming in from the west and when we reached a gate in the fence (about 2/3 way up the final slope), we were eventually caught up, had to stop to put on waterproofs. First drops of rain spoiled Kevin's photos 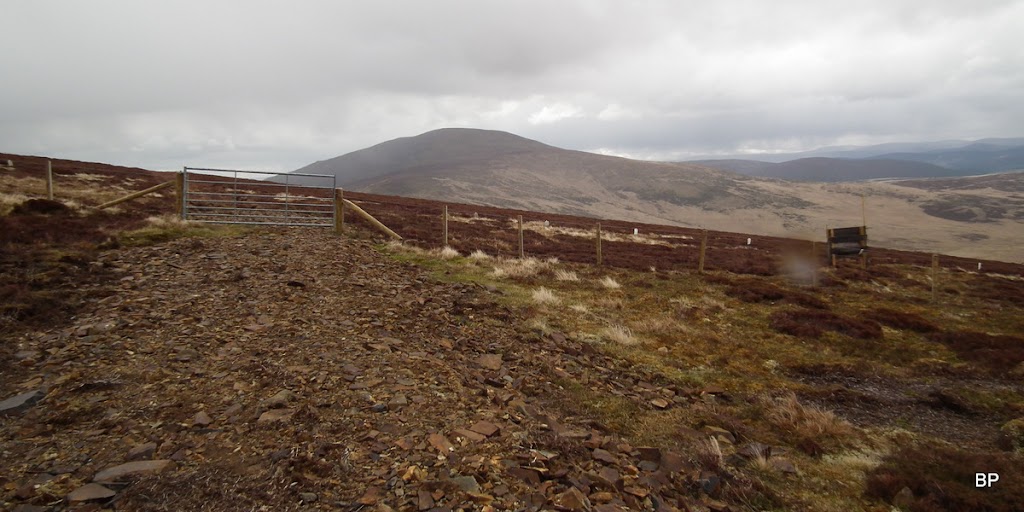 We didn't cross the gate, just continued along the fence to the summit. The drizzle stopped for maybe 10 minutes when we arrived byt he massive cairn - lucky us! We could take a short break and at least try to squeeze something out of the views around!
Panther's 34'th Graham: 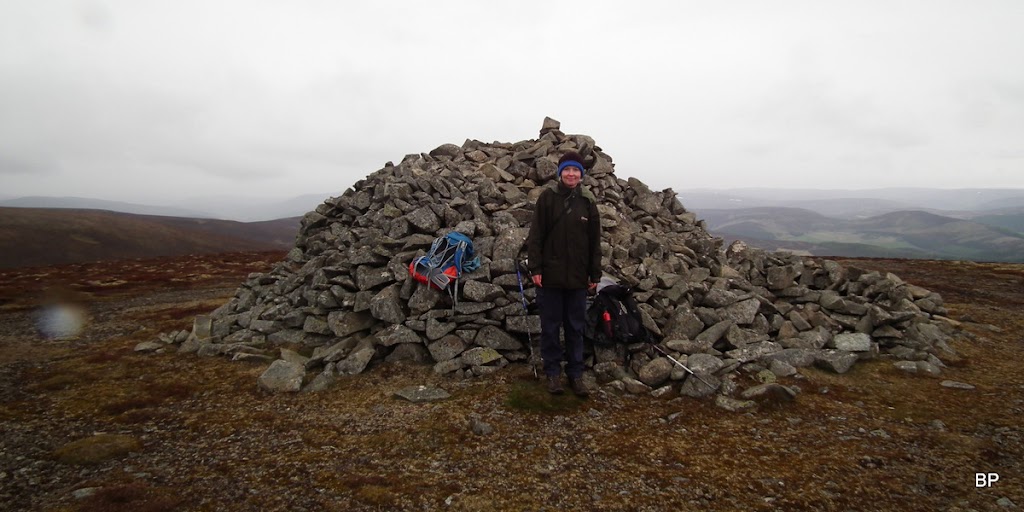 Morven from the summit of Mona, still visible at that moment but soon it disappeared in cloud: 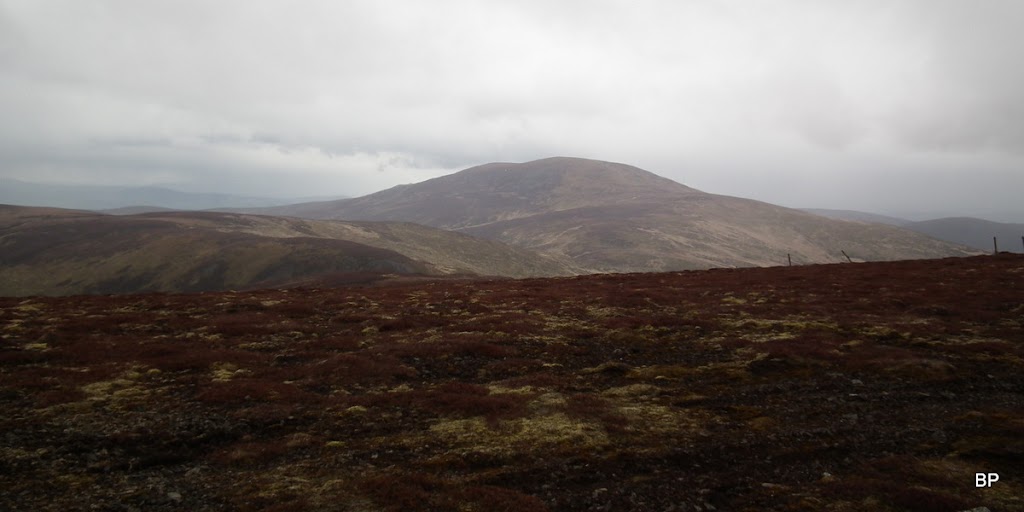 View north, not much at the moment, but on a sunny day this hill would be a good viewpoint, with great panos of Moray to the north, distant Cairngorms and Lochnagar to the south... 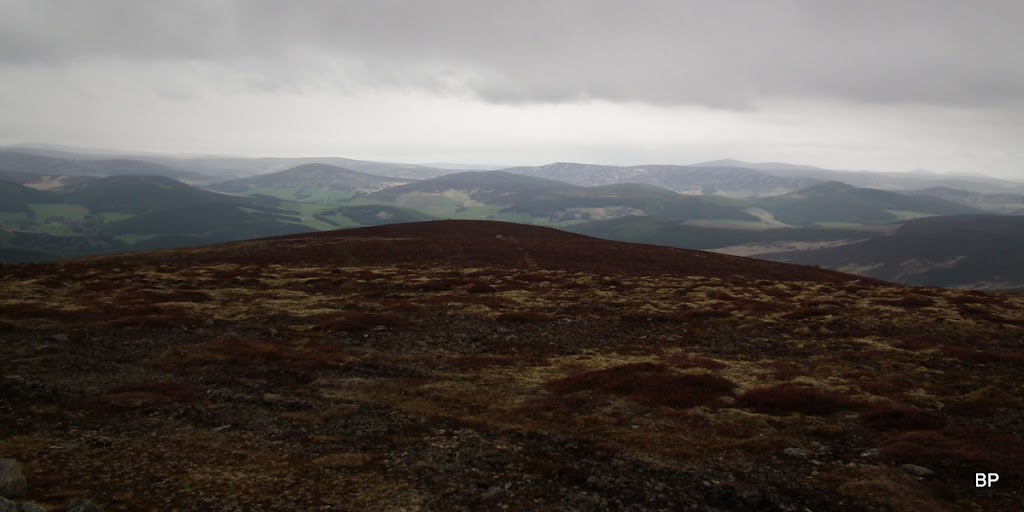 Another wave of bad, bad weather racing towards us from the west:

Kevin taking advantage of a break to fill his fuel tanks 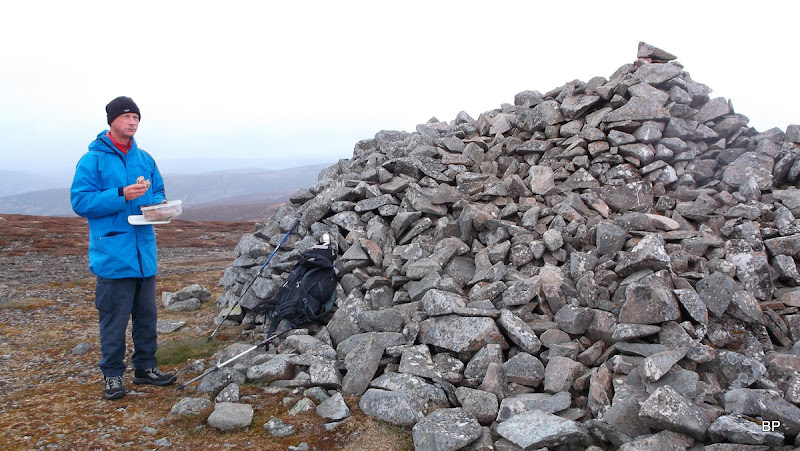 From the summit of Mona, we descended west over heathery ground (no proper path but going relatively easy) to a shallow col. As we began to climb up Cairnagour Hill, the rain returned, and very quickly it turned to slushy snow, melting as soon as it hit the ground. We couldn't see a thing and I was glad that we didn't pick up anything more difficult that day!
The summit of Cairnagour, Kevin grinning despite snow (strange, the snow doesn't show in my photos!): 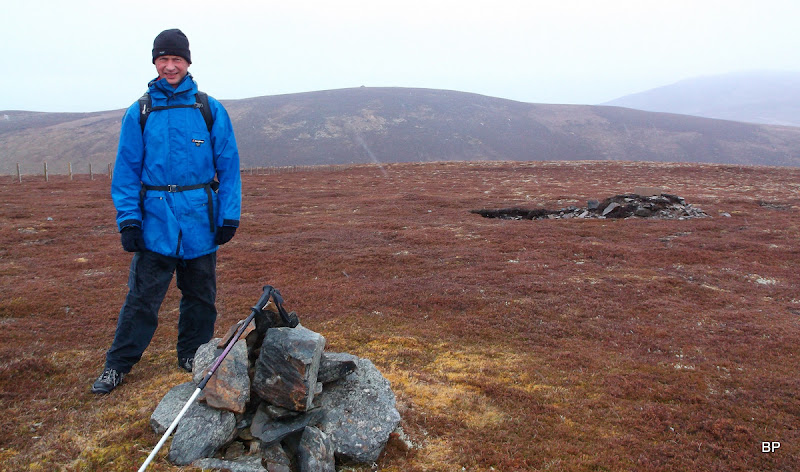 It got even worse when we traversed to Scraulac, we didn't bother digging out cameras, luckily the track descending back to Glenfenzie is so obvious, it was impossible to miss it even in heavy snow!
The snow turned back to rain as we dropped from the last top, and we returned to the car in about 3 hours wet but happy

Shame about the weather, we missed some great views, but still enjoyed the outing, just in a different way

We will definitely return to this sulky lady in winter conditions

Re: Voyages of the Graham Bagger: Mona Gowan

Hey BP, nice to see this from a different route. I remember doing this one in fantastic sunshine the whole way, I wish you could have had the same. You still got some lovely shots of the hills and certainly brought back memories for me, I really enjoyed this, I'm glad you and Kevin took the time to tramp out in the rain/snow

Re: Voyages of the Graham Bagger: Mona Gowan

Hi BP - I thought I had done this hill, turns out I haven't.