Not a guilt-free trip up Mount Battock!

Not a guilt-free trip up Mount Battock!


Decided to opt for a local hill I've yet to do - Munt Battock. Though it started off with me getting guilty eyes from my collie Fly who was staying home for this one. I wavered but managed to stay firm despite the pleading brown eyes begging to come along! So yes, now I am the most evil dog mummy in the world in the eyes of one of my dogs!

With Millie at my side (amazing how obedient she is without her sister around!) we followed the route description. Though I did find that my map is seriously outdated as there are loads of new roads crossing the hills. But we managed to figure it out and hopefully the new map will be updated with all the new tracks! I must admit, I did find the tracks a bit of an eyesore but the wildlife made up for it. Golden plover, red kite, curlew, ring ouzel, lapwing, wheatear...sadly not able to get close to most of them for decent photos though. There were a few sheep around but at a distance so it was possible for Millie to be off lead as she doesn't stray off the path, though she was called to heel when passing the golden plovers to try and avoid upsetting them too much as we went passed.

We hit a bit of an obstacle at the fence and gate - there is no gap left for dogs and the gate was padlocked shut - but I managed to lift a section of the wired fence up enough for Millie to slip under so we could reach the summit.

It was pretty windy at the top but there was shelter there to grab something to eat while hiding from the wind before descending back down the way we came.

All in all, an enjoyable walk that I really wish I had done sooner! 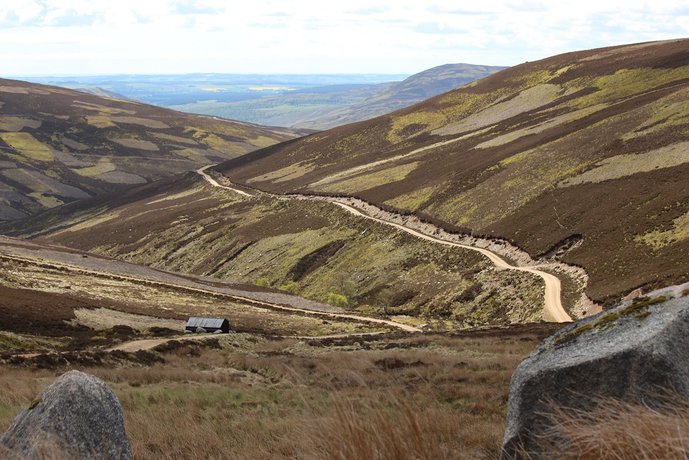 Looking down at the track Remains of a golden plover egg? Millie and Dottie at the summit marker Not bad views all the way down to the sea! I gave her a couple of treats near one of the grouse butts...after that she wanted to visit every single one!

Re: Not a guilt-free trip up Mount Battock!

Good report and a hill I've also had in mind. I do like your dog's wee companion too!

Re: Not a guilt-free trip up Mount Battock!

I know what you mean about new tracks in this part of the world - there do seem to be loads of them.