A year ago I set out to climb this hill with more optimism than sense, a Saturday adventure from Oban on the Waverley having left me with a free Sunday and my eye on a hill which would fit perfectly into the gap between the first Craignure ferry and the last Glasgow train. But I got up that morning to find the top half of Mull covered in cloud, and although a vaguely hopeful forecast for better weather later in the day was enough to get me to set out, the cloud never did break, and I made it as far as the second mast before turning back when the path ran out.

A year later, with the same plan, I was watching a very bad Sunday forecast with concern when the news arrived that the Waverley sailings were cancelled. So with half an adventure booked I did some rearranging, and headed for Oban on the Saturday morning train with the intention of leaving my bag at the station and heading straight for Mull.

Sadly the Waverley's curse wasn't finished yet, and at Crianlarich the already overfull Oban train - I was sitting on the floor under a bike, and all the vestibules and bike areas were full - was met by 30 or so pensioners trying to get on! Some kind of row between the two halfs of the train eventually led to 4 carriages going to Oban and 2 to Fort William, but also meant we left Crianlarich 18 minutes late, when there were 18 minutes between the train and ferry.

Arriving into Oban at 11:43 I decided I might as well try it, and found myself at 11:45 in the middle of a queue for a ferry which finally left about 12!

Finally with a chance to relax, I settled down to enjoy the views. Dun da Ghaoithe stands out very well from the ferry on the way over, and it was nice to get a preview of it. Dun Da Ghaoithe from the ferry

From Craignure it's just turn left and follow the road, past the old pier and police station and garage and a cluster of houses at Torosay.

It's spring in the islands (although to be fair it's not summer anywhere else either) with bluebells and primroses and bracken curled up like fossils, and the almost autumnal look of trees which haven't got used to being green yet, and were tinged with yellow or even orange. I came to the first track running up to the right, looked doubtfully at it, remembered that I did the same thing last year, and passed on to the second one. The right track leads uphill quite quickly, so that the views start to improve straight away, at first over the trees to Duart Castle and the mainland hills beyond. After the farm buildings the track comes to a gate with a quite wobbly ladder stile, which turned out today to be guarded by cows. I was quite pleased to discover that I seem to have recovered from being chased a couple of years ago - I was nervous, but no more than I think is reasonable when walking past large unpredictable creatures with sharp hooves and horns! Cows from a safe distance

Safely past the cows I stopped for lunch, and was immediately joined by a hopeful dog which sat down beside me until its owner came along and took it away.

Above this there’s a good track with snow poles, which leads up towards a forestry plantation with a lot of new fence and turns the corner there. I was toiling a bit uphill, and decided that I was going to hide my big bag and collect it again on the way down - it definitely wasn’t a busy path. So lightly loaded I headed on again. Above the forest the views had spread out again and I could see into the Sound of Mull and watch the ferries going up and down - the Clansman was just coming out of the sound on her way back from Coll and Tiree, while the Isle of Mull was heading for Craignure. From then on the Isle of Mull was quite a good clock, when I could see her! It’s quite a pull up to the first masts, even with the way the track loops, but I got there in the end. After that the track isn’t as well used, with grass growing along the middle, which was quite nice for my feet - the track is useful, but it’s quite hard going. After the first masts

You start to see where you’re going after the first masts, with the two summits ahead and the great corrie opening out to the left. It’s a steep climb again for a while, with zigzags, then flatter towards the second mast. The Sound of Mull 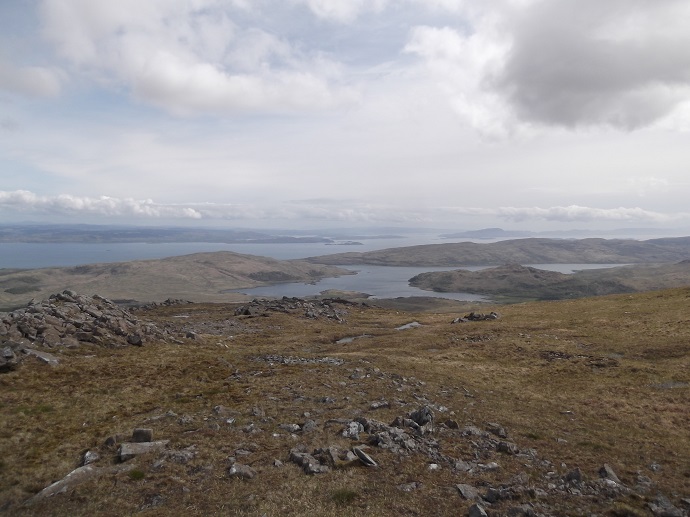 The rise just beyond the second mast was as far as I’d been - the last time I was here, this was all just a wall of mist. There was only the faintest ghost of a path leading up, and I couldn’t remember seeing even that a year ago. At the top of the rise was a flat place with some pools of water and some pools of stones - the water mostly stayed in the pools, so that the rest of the ground was quite dry, but the stones didn’t! Past this there was probably the longest steep climb, and my least favourite part of the day - it was quite relentless for a while, although it did become quite exciting as I came up through a line of rocks ahead and found myself on a genuine ridge which fell away on either side - definitely not a place to be in mist. The path had become far more distinct as the ridge narrowed - I suppose there was only one way to go instead of a choice of lines - and that and the more exciting views did make it a bit easier, but it still took longer than I expected to come out at the trig point. Although this wasn't the highest summit it definitely was (part of) the top of the hill, because as well as my views from south to east to north (Jura to Rum, via a lot of mainland hills!) I suddenly had a view west to the rest of Mull as well, and valleys on both sides of me. The rest of Mull

The ridge between the two summits was amazing, and by far my favourite part of the day - a fairly narrow up and down path with never too much of either up or down, and good views to both sides. Arriving at the bottom of a very stony edge I decided to bypass it on grassier ground to the right then tried to find the least stony route to the skyline,expecting to end up on just another bump, and instead found myself looking at the summit. The ridge between the summits The views all round were wonderful, but it was a bit too hazy for them to be at their best - the paps of Jura had been quite clear earlier but were now trying to hide, and although I could maybe just see Skye it was only the Rum Cuillin that was standing out. Still, I love island views because there's so much less to get in the way, and this was a good one. The mountains of Mull The way back over to the lower summit was just as fun, but in general I'm not keen on going up and down the same way, and although down was quicker and easier than up, it was a bit dull - which is probably why I didn't take any pictures until the bottom - and the endless stones were starting to wear out my feet. Maybe I should have saved it for a day when I had time to do Sgurr Dearg as well, but it fitted so neatly into the gap, or maybe if I hadn't had to pick up my bag I should have tried going down by Scallastle, but never mind, I enjoyed it anyway. I made it back along to Craignure in good time for the ferry, which was late anyway, and sat with my poor feet in the sea while I waited, then celebrated with curry and local beer on the way back to Oban. An excellent looking summit, another one I'm not familiar with.

It's good you got a clear day for this, the views are excellent. My favourite Scottish sub-Munro so far.