our_route.gpx Open full screen  NB: Walkhighlands is not responsible for the accuracy of gpx files in users posts
After the rain soaked debacle of last week, we headed for Loch Laggan, with a little more confidence. Upon arrival at the car park, however, low cloud was clinging to the lower hills

but with the forecast for any cloud to lift above 1200m, we set of to do Creag Meagaidh circuit by the anti-clockwise route. We folloed the path, until we located the little cairn next to the track to take us up toward Na Cnapanan. This was a pretty easy, if boggy, ascent. Sron a Ghoire and our descent route.

The views were opening up all the time, though the cloud did seem a bit persistent First view of The Window.

Views into Coire Ardair appeared, along with The Window 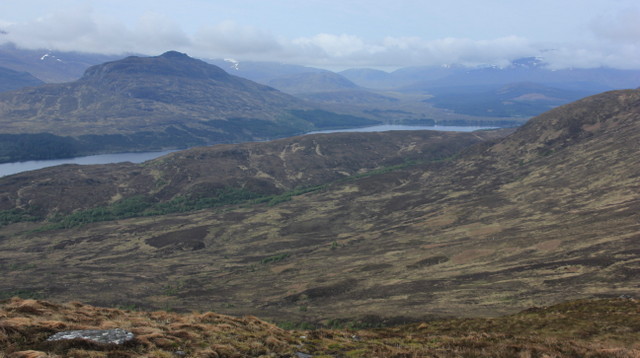 Looking into Coire Ardair from ascent of Carn Liath.

This is quite a straightforward ascent over a gently rising whaleback and the summit of Carn Liath was soon reached. We had a quick bite to eat before heading across to the Munro Top of Meall an-t-Snaim. The route ahead, towards Stob Poite Coire Ardair.

By now, the cloud had dispersed and it was becoming quite warm

There is great views into Coire Ardair and up to Meagaidh all along this route. 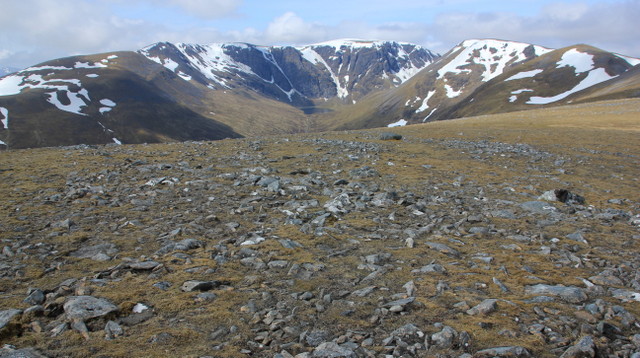 Back to Carn Liath from Meall an-t-Snaim. Plenty of snow in the Coire.

We crossed the Munro Top of Sron Coire a'Chriochairein before making for Munro #2 of the day, Stob Poite Coire Ardair. There seemed to be a full winters worth of snow on Aonach Mor & Beag, and the amount still on Meagaidh wasn't to be shniffed at. Luckily the route past the Window and up to Meagaidh was snow free. Cairngorm hills could be made out in the other direction. A couple of women were ahead of us, making for the same place. Other walkers head for Meagaidh summit. Plenty of western Munro's on show. 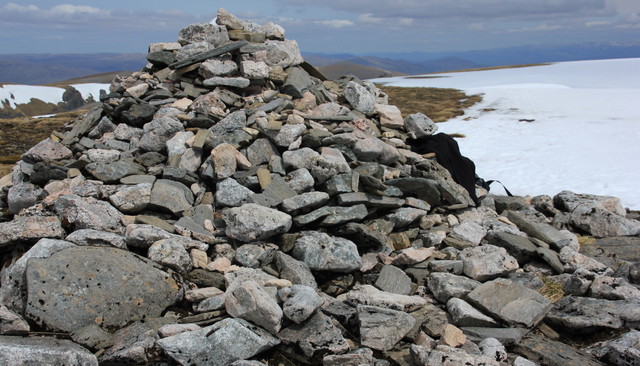 While on here, we had a quick game of Guess the Fell with one of them. So many to see, I think between us, we just about nailed it!! Looking back to The Window & SPCA.

Fun n games over, we made for Puist Coire Ardair, another Munro Top before ambling down to Sron a' Ghoire, our last Munro Top of the day. Over Loch Laggan to the Alder range.

It seemed easiest just to go overland from here, so we followed the Allt Bealach a' Ghoire, before locating a path of sorts and getting back to Aberarder. A fantastic walk with some great mountains and surrounding areas, which has restored my faith in MWIS somewhat

Re: Redemption on Creag Meagaidh

A wonderful day in what looked just about perfect conditions

Re: Redemption on Creag Meagaidh

It sure was JK, other than distant views being hazy, a really good walk this one