One more addition to my "Graham Bagger" logs and another half-day's hill, may be a shortish walk but well worth the effort for the Graham in question is an excellent viewpoint

Back in spring 2014, when we did the Meall na h-Eilde and Geal Charn circuit, we veered off WalkHighlands route by descending via Gleann Cia-aig and later we kicked ourselves, as this glen, sadly, has been turned into a mess by tree feeling. Kevin actually said, we should have returned over Glas Bhein, a nice, shapely Graham wedged between Gleann Cia-aig and Glen of Allt Dubh.
A year has passed and we came back to Achnasaul area to correct our omission and climb Geal Charn. Weather wasn't great so we intended to do a shorter walk, then pop in to an interesting old ruin, Invergarry Castle. But the Graham first.
Having walked the glens in this area before I was pretty confident that we would have no problems navigating. Just as well, because Kevin forgot his GPS. Funny, how we grew used to this little gadget... Back five, six years ago, we only used maps and compasses and it seemed all right, now it's the little beeping box that guides us. In Garmin we trust?

When planning this outing, we knew we wouldn't be making the same mistake twice and go down Gleann Cia-aig, so an easy route was drawn, up and down Glen of Allt Dubh. Little we knew that circumstances changed since our last visit!

our_route.gpx Open full screen  NB: Walkhighlands is not responsible for the accuracy of gpx files in users posts
Starting point, a good "wild" car park in the forest just before Achnasaul. Just as we were unpacking, another car arrived, a German family, intending to climb the two Corbetts. We let them go first but to our surprise, they walked past Achnasaul houses, reached the bridge over Allt Dubh and stood there, scratching their heads. Soon we noticed what puzzled them - a big board saying "Building site! No unauthorized access!"
The building site has something to do with hydro work. I told the Germans that we had been here before and the mess wasn't here, but I still reckoned it would be OK to walk through the working area, as it was Bank Holiday Monday and no workers on site. Actually, there was one bloke, but he ignored us completely, so we took the track up Glen of Allt Dubh without any hesitation. The Germans followed us, but we were a bit faster and soon they fell behind. Later we spotted them ascending Geal Charn

The access up Glen of Allt Dubh used to be a nice, grassy track, a bit boggy in places but generally good going. Now, as we walked on it, I tried to take in the UTTER DEVASTATION caused by the bulldozers... My heart was aching. Such a quiet, natural glen has been totally spoiled!!!
Just to compare: this is how it looked in April 2014... 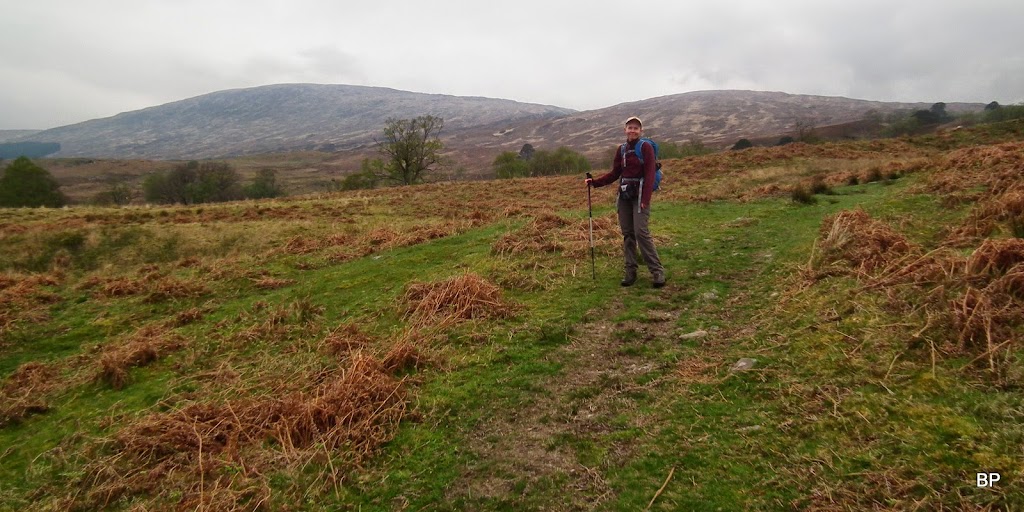 And this is the current state 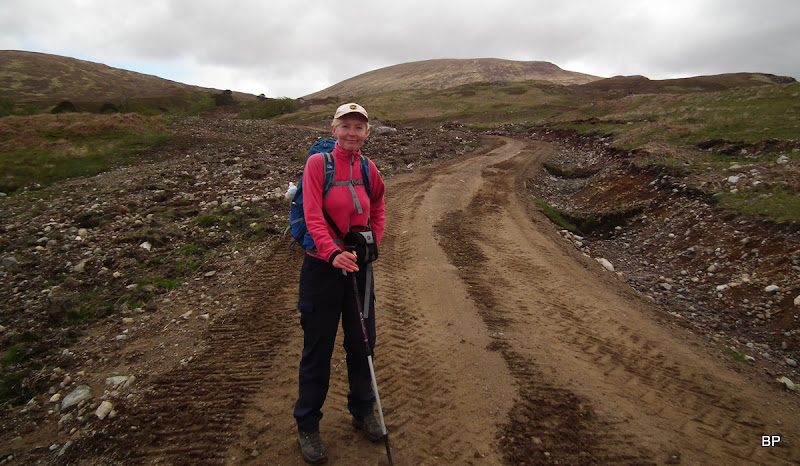 Even the views back to Loch Arkaig and surrounding hills lost their charm, when seen with the foreground... 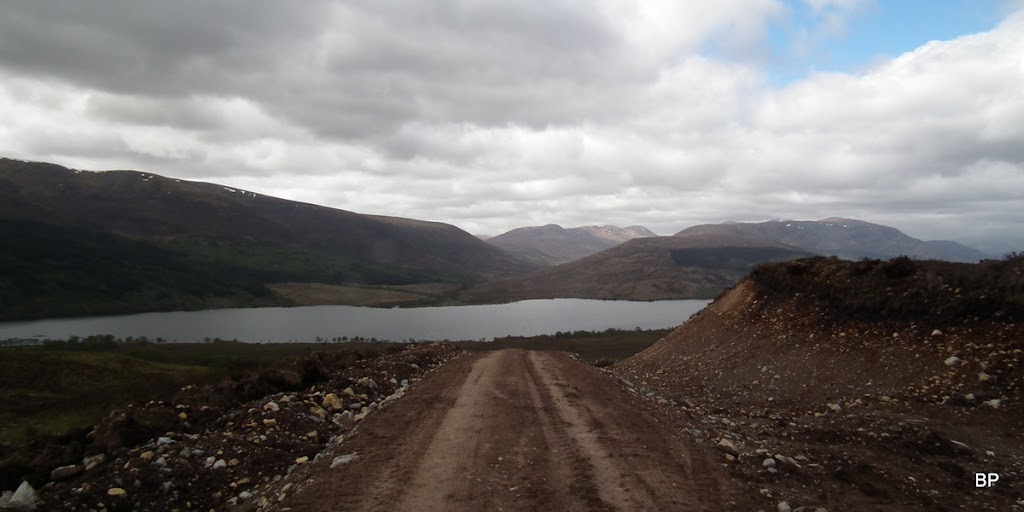 "Our" hill was looming above us and I hoped that once we leave this horrible yellow-brick-road, we'll have a better experience... 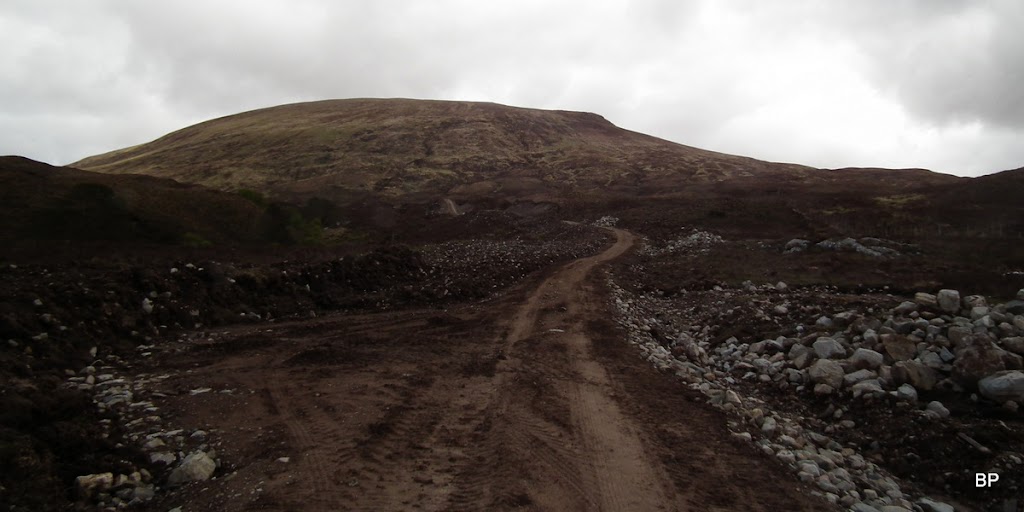 The day was showery and lots of cloud passed by, but we managed to take some decent photos, as long as we avoided the building site-type views... 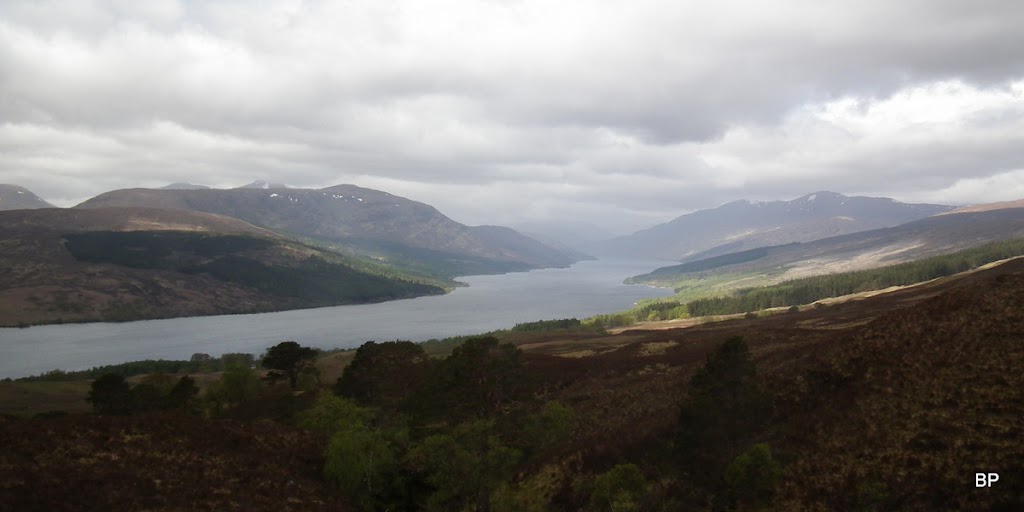 Having ascended about 200m on the nasty "A9", we reached the actual hydro scheme and had a good look at it. I don't know, maybe I'm too emotional, but is this tiny dam worth all the devastation to the landscape????? 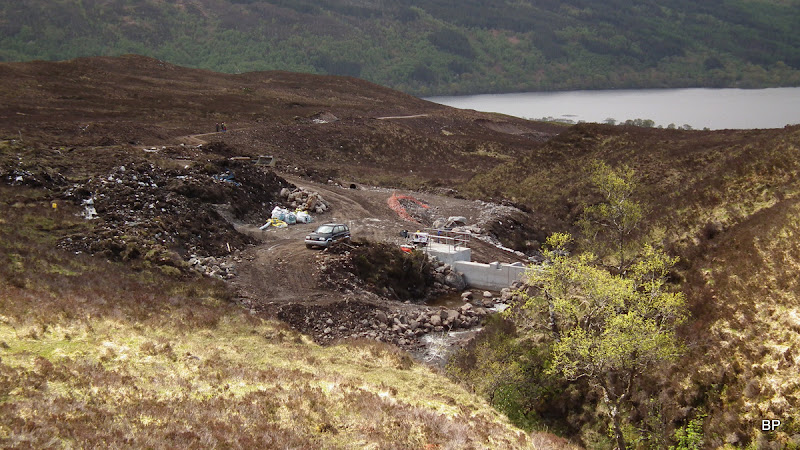 At least once we left the hydro scheme behind, the views changed and we were now surrounded by more natural shapes and colours

The path was wet but I decided I'd rather tackle some mud than trudge up A9... 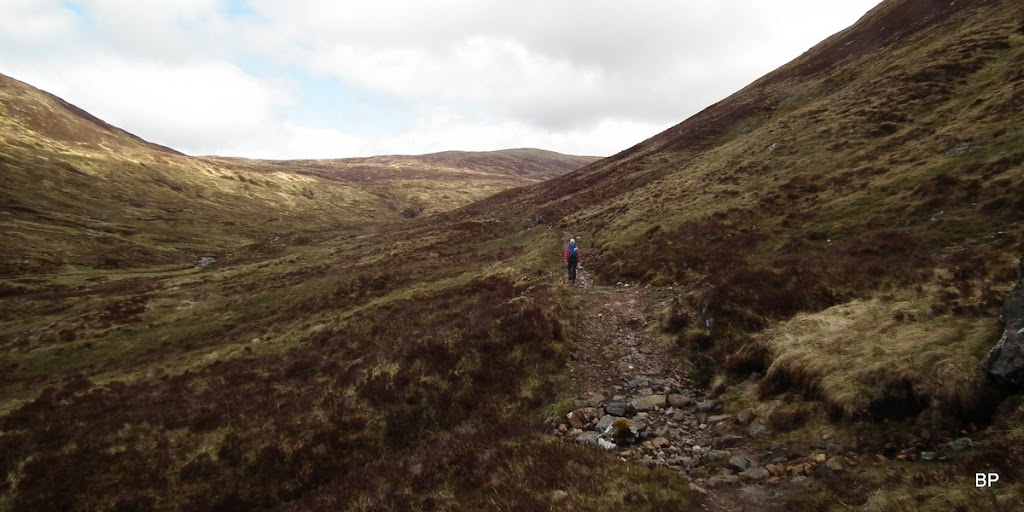 We followed the path as far as it existed and when it became less obvious, we turned east and climbed straight up the steep, but easy slopes of Glas Bheinn. The angle is annoying for the first 100m of ascent, but the ground is mostly grassy, with an occasional wet patch here and there. Doable: 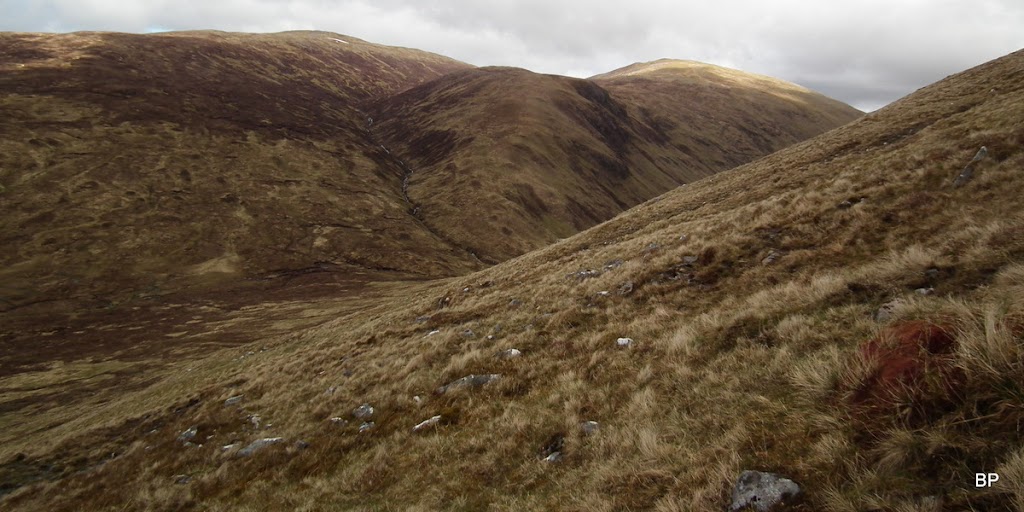 The sun came out as we gained height and my heart started beating faster - we timed it just right! We were going to get some summit views after all 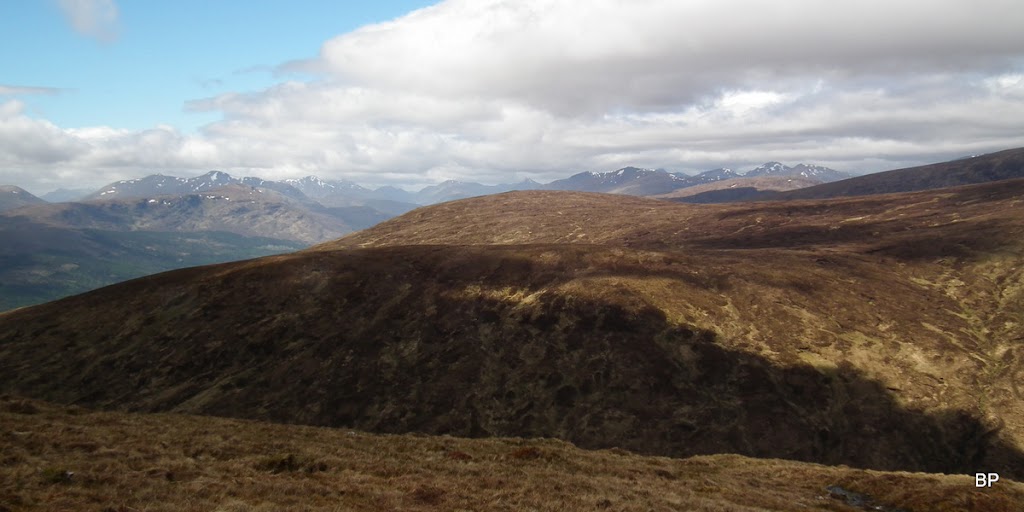 We reached the main ridge past a small area of peat hags (they can be avoided by staying more to the left as you climb) and now we were only a short distance from the summit: 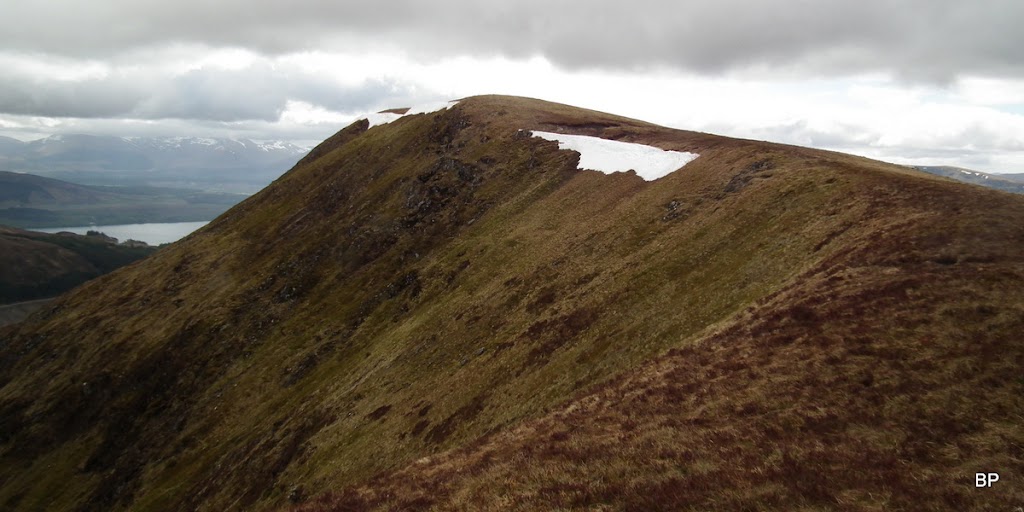 The cloud was slowly lifting from the tops of Loch Lochy Munros: 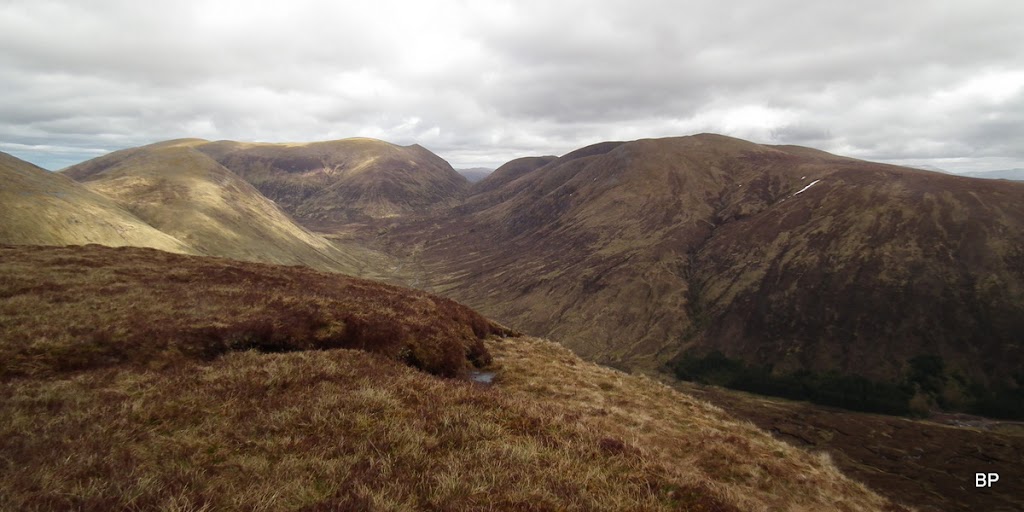 To the north, the gloomy conditions held on:

We had a peek down into Gleann Cia-aig , i don't know what I expected to see, but what I saw wasn't optimistic: 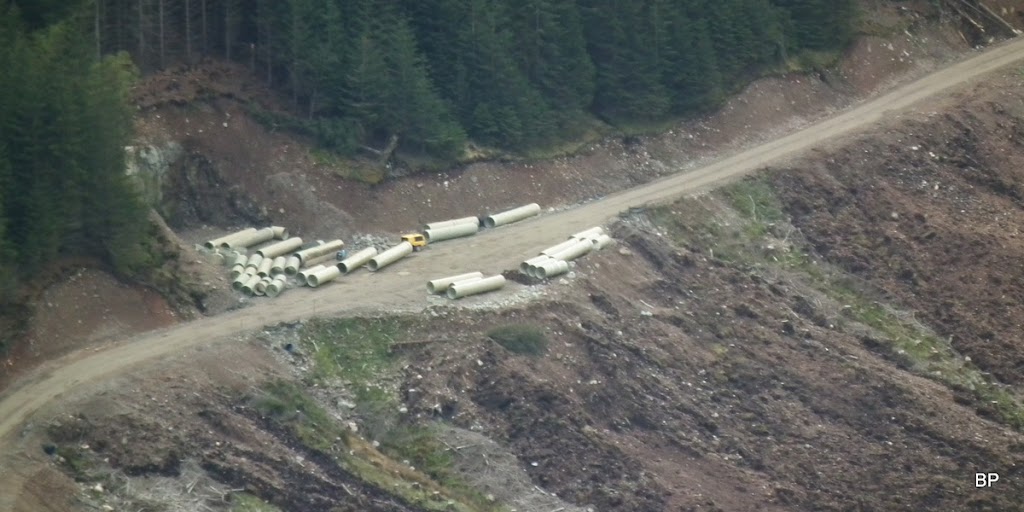 Rather than cry over bulldozed tracks and giant pipes, I decided to look for some forms of wildlife. Oh, one just happened to hop about, so I asked it for a pose 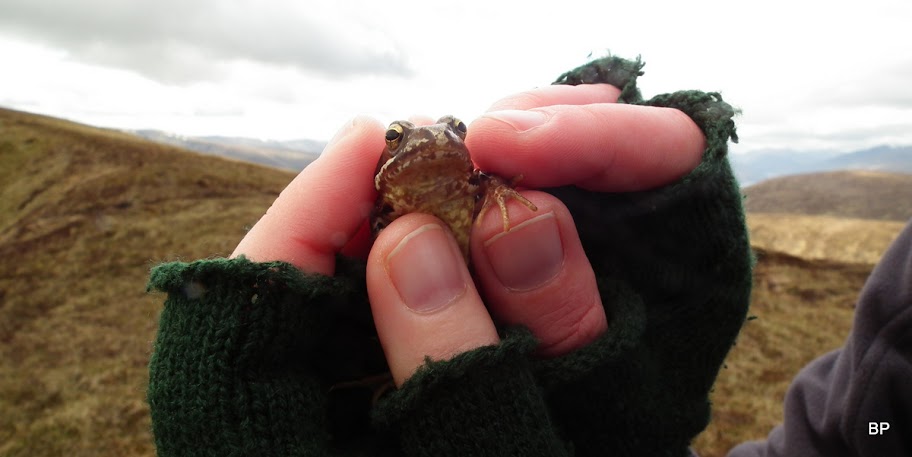 10 minutes later we arrived by the summit cairn. it was windy and quite cold as for last days of May. We hoped for a longer break, but the cairn wasn't big enough to protect us from the clod gusts...
Kevin and Lucy on the summit of Glas Bheinn. It was Lucy's first Graham, now she's becoming as addicted to hill bagging as we are... 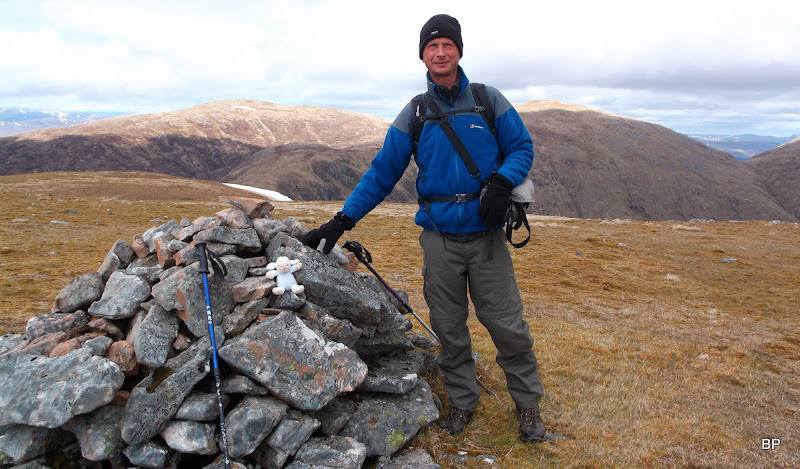 View north-east from the summit cairn: 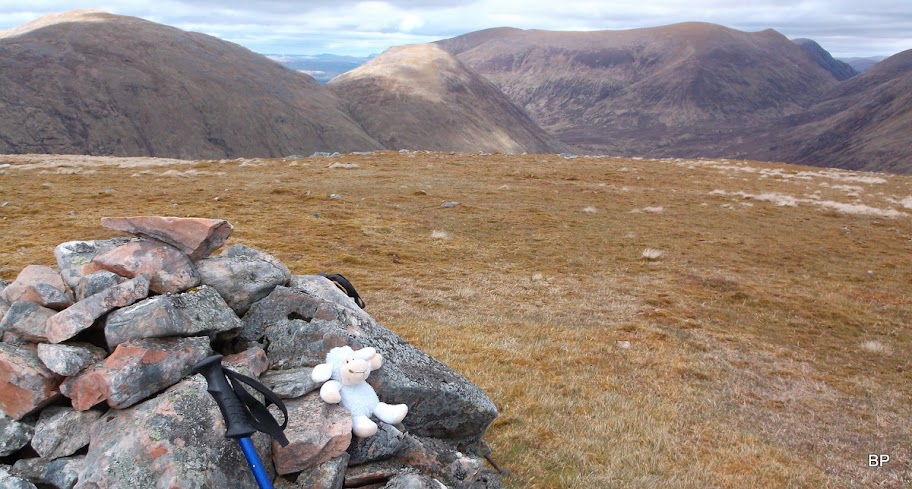 This Graham is a good viewpoint to all Arkaig and Glenfinnian peaks, the view down to Loch Arkaig is breathtaking, even on a semi-cloudy day like we had: 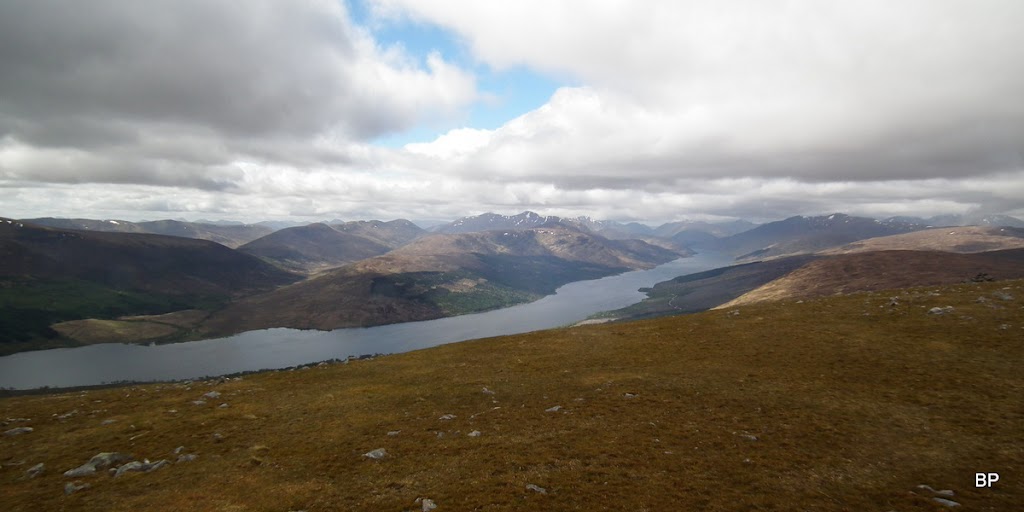 Another pano, this one towards the Nevis range:

Meall a'Phubuill (the long ridge in the middle), Mullach Coire nan Geur-oirean (the even longer ridge to the right) and Gulvain behind:

The cloud can sometimes create interesting shapes/layers for unusual snaps: 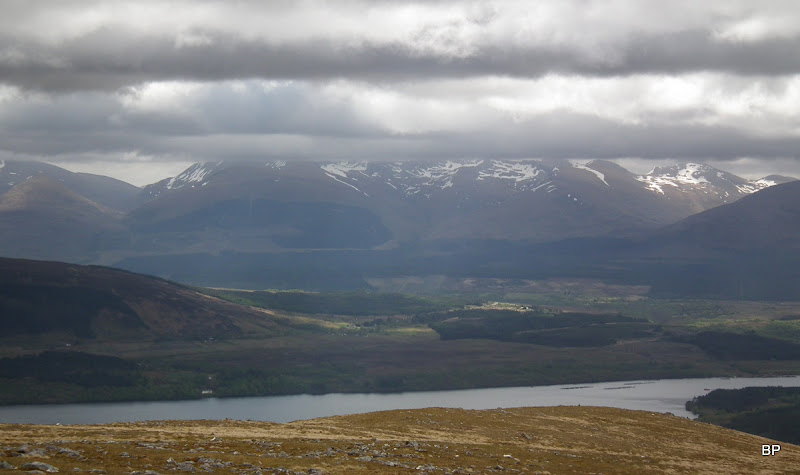 The wind was chilly, so we descended a bit back towards the "A9", found a sheltered spot and sat down for a short break, facing the panorama of Loch Arkaig. Still so many hills to do here...
The southern slopes of Glas Bheinn are steep-ish but manageable on a descent. We followed a tiny stream most of the time, to reach the bulldozed track just below the hydro scheme. Back in the car in 4 hours, and we didn't rush it. No need to run if the day is actually better than the initial forecast.
Because we had enough time left, we paid a visit to Invergarry Castle. This forgotten ruin is situated just off A 82, within the lands of Glengarry Castle Hotel, but one can venture onto the property, at least to see the castle. Sadly, the ruins are in dangerous condition hence the building is fenced off, but is is possible to have a look inside via specially constructed wooden platform. 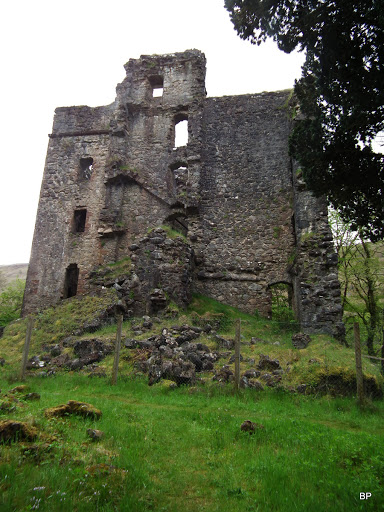 Invergarry Castle was the seat of the Chiefs of the MacDonells of Glengarry, it was built on a rocky cliff called Creagan an Fhithich - the Raven's Rock - overlooking the picturesque Loch Oich. It used to be a strategic building in the days of clan feuds and Jacobite risings. 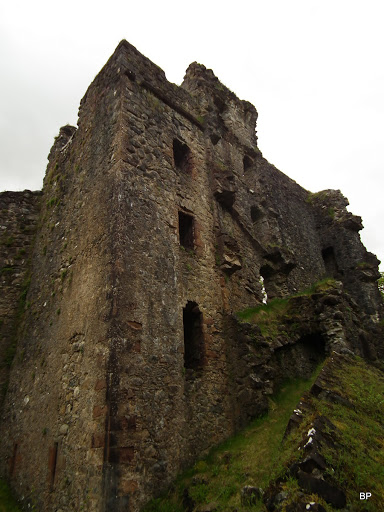 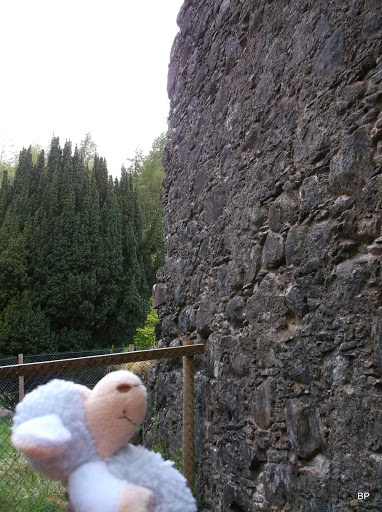 MacGibbon and Ross (THE CASTELLATED AND DOMESTIC ARCHITECTURE OF SCOTLAND) describe the Old Invergarry as follows:
"A ruinous mass of building on the thickly-wooded and precipitous north bank of Loch Oich, near the centre of the Caledonian Canal, which presents to the numerous travellers who annually sail up and down that magnificent valley one of the most picturesque objects of the route. It was the stronghold of the Macdonnels, and was occupied by the chief of the clan till 1746, when it was burned and destroyed by the Duke of Cumberland.
Prince Charlie is said to have twice found shelter within its walls. The existing building seems from its style to have been erected towards the
end of the seventeenth century. It is designed on the L Plan with an oblong staircase tower in the re-entering angle and a round tower at the north-east angle of the main building, which also contained a staircase."
Ruinous and fenced off, Invergarry Castle still impresses... 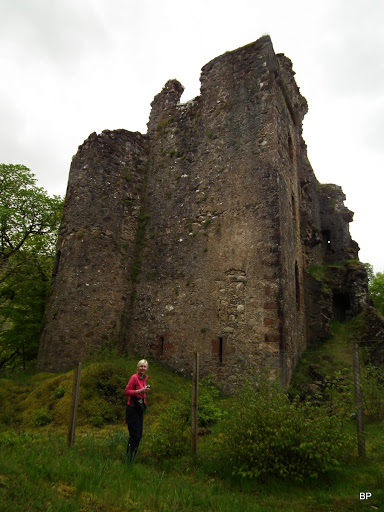 The inside of the building has been propped up to keep it standing. Hopefully, this magnificent building will be preserved properly for future generations 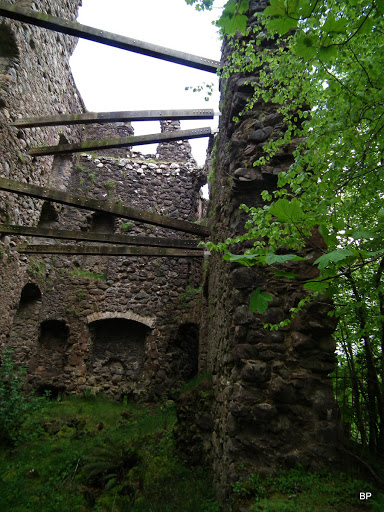 Back to the professionals...
"The main building measures about 55 feet by 32 feet over the walls, which have been carried to the height of five stories. The wing, which was on the west or landward side, has been almost entirely demolished, but enough remains to enable the plan to be traced. The entrance doorway is in the north wall of the wing, and has an architrave moulding.
Opposite the entrance a good square staircase seems to have led to the first floor, above which level the two next upper floors were reached by the very unusual form of a square or scale staircase in the oblong tower in the re-entering angle. Some portions of this stair still remain." 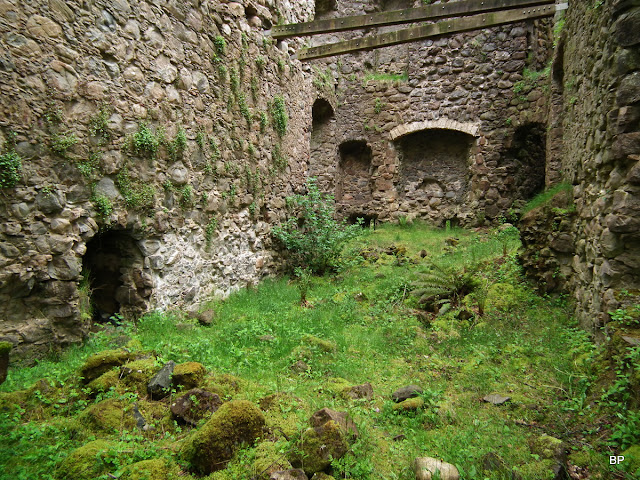 A beautiful yet very spooky ruin. Shame it's fenced off but even looking from the outside, I had goosebumps!

I still have one more TR to write, but with another busy week coming, I don't know when I will find time to do it...

Apologies for the delay...