Day three of our holiday in Roy Bridge and the forecast was for another good day, this is rare so we had to take advantage.
We spent the day before doing Stob Ban and Mullach nan Coirean in the Mamores and promised ourselves we'd spend another day Mamoring this holiday if the weather was kind and the Ring of Steall was a mountain day we really wanted to do.
I'd read a lot about this route and the only section I was a wee bit apprehensive about was the Devils Ridge but with the weather promising to be good, any slowing down on this section wouldn't be a problem.

We were dropped off at the top car park by daughter Louise and arranged to be picked up in the lower falls car park later on to save the walk back to the start point.
We followed the W.H.route up to Steall falls, Steall Falls, I think everybody's taken a shot similar to this.

chickened out on the wire bridge crossing and opted for the paddle across the river which was easy enough with boots on although a bit slippy in parts, found the path and started the long climb up An Gearanach. From the slopes of An Gearanach, The Ben. Not sure what the pointy ones are, Binnein Mor? Looking over to the last one of the day, Sgurr a' Mhaim. Close up of Sgurr a' Mhaim.

It was steep to start with but does ease higher up, height is gained very quickly and we were at the summit about 2.5 hours after starting. A view of the Ring.

From this first summit you can see the whole route on a clear day and the way over to Stob Coire a' Chairn, the next Munro, includes a nice ridge walk then a steep drop into the bealach followed by a fairly steep ascent to the summit. Denise on Stob Coire a' Chairn. From the second summit to the third, Am Bodach, the descent isn't too bad but the re-ascent onto the summit of Am Bodach is probably the steepest of the whole route and I found it a bit tiring. On Am Bodach, the view was worth the effort. Denise on the main Summit. There's another cairn on the S.E spur of Am Bodach, this is a view from the cairn.

Once at the summit the way forward changes from steep descents and re-ascents to a much easier broad ridge walk over much easier terrain and soon the top of Sgurr an Lubhair is reached. And looking towards Sgurr an lubhair to the right from the second cairn, Stob Ban appearing above it at right of centre of photo

From this summit there's a descent into a bealach and then an easy climb onto the start of the Devils Ridge.
I was a bit apprehensive about this ridge but in reality we found it to be great fun with no real exposure at all. Stob Ban from the start of the Ridge.

Once over the ridge the climb onto the last munro Sgurr a' Mhaim is steady enough but a bit of a trudge after a fairly hard day. Denise with The Devils Ridge behind, it was a good place to be, great fun, made all the better with the great weather. Sgurr a' Mhaim next. 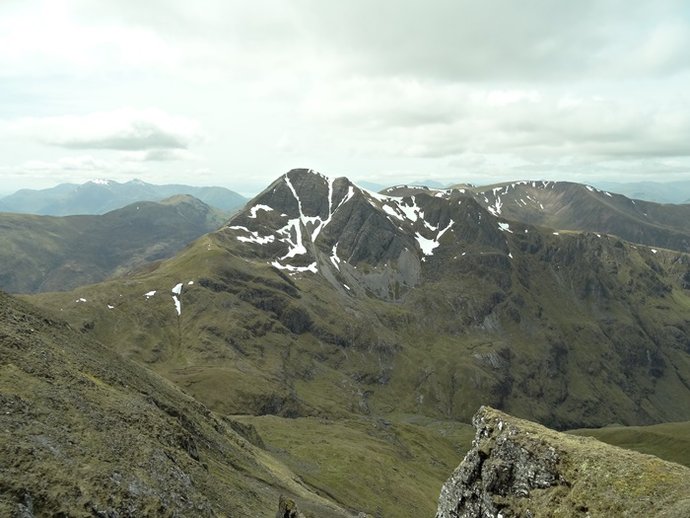 Stob Ban from the climb up Sgurr a' Mhaim Last look at the ridge.

Once on the summit we had a good rest and prepared for the descent. On the last summit, this was a great day out and the weather made it that much better.

This was easy and steady enough to begin with but it soon turned very steep and very tiring, in fact we both found this to be the hardest part of the route and from last summit to the lower falls car park it took us two hours, it was tedious.
The whole route took us 8 hours but it was very enjoyable, one I would recommend to anybody wanting to have a go.

You deffinately picked a good week after a very wet Saturday. Wonderful stuff in great weather conditions just what you need on these hills. I had forgotten you were based at Roybridge, I stopped off at the Bunroy campsite last Friday en route to doing the Lochaber Dirty Thirty, on the Saturday, excellent walking conditions again. Your totals looking very healthy Martin

Nice report Martin and useful; I am heading this way soon.

Thanks for this report - very helpful, hope to visit this group later this year.

Great timing for your holiday - about the best weather we've had so far this year!