Reaching 100 on the Creag Meagaidh circuit.

Reaching 100 on the Creag Meagaidh circuit.


Today our route included my 100th Munro, up until July 2013 I'd managed to collect 19 Munro's, not a massive tally by any standards considering my first munro was Beinn Dorain in 1974 but I've managed to increase this tally to 103 by the end of this walk so 84 munros in less that two years isn't to be sniffed at I guess. Our next target is to get Denise to 100 and hopefully by the end of this holiday we should need 5 to get her there, I'm lucky to be married to someone who wants to achieve similar goals and hopefully we'll get her there when we have our next trip up to Ullapool in July, fingers crossed.

The Creag Meagaidh Circuit was today's objective and we had the most fantastic weather you could wish for.

Our son Richard ferried us to the car park at the start of the walk because we wanted to have no restrictions as to how to finish this walk as I had a plan if we felt we had some energy left on Creag Meagaidh.

The walk from the car park starts on an excellent path View from the car park

About 1.5 km further on as the W.H. description says, look out for a small cairn that indicates the start of a rough path through the trees, we found it no trouble and it does go over some tricky ground but it soon clears the trees and is clear all the way to the summit of Carn Liath. As height is gained the views get better, Loch Laggan Coire Ardair and the Window.

Carn Liath was the "special" munro for me, number 100, and, although not especially spectacular, it was a nice Munro to start my second century on and I got to have my photo taken, woohoo!. 100 up and the weather couldn't be better Looking North, many mountains still to do.

From this summit the walk to the next Munro Stob Poite Coire Ardair is along a lovely broad grassy ridge which is very easy going although in clag I reckon it could be hard to navigate. So we must continue, our route ahead, Creag Meagaidh and Stob Poite Coire Ardair

The view of the cliffs on Creag Meagaidh became better and more spectacular the closer we got with plenty of snow high-lighting the rock. Snow and Cornices on the cliffs around Coire Ardair 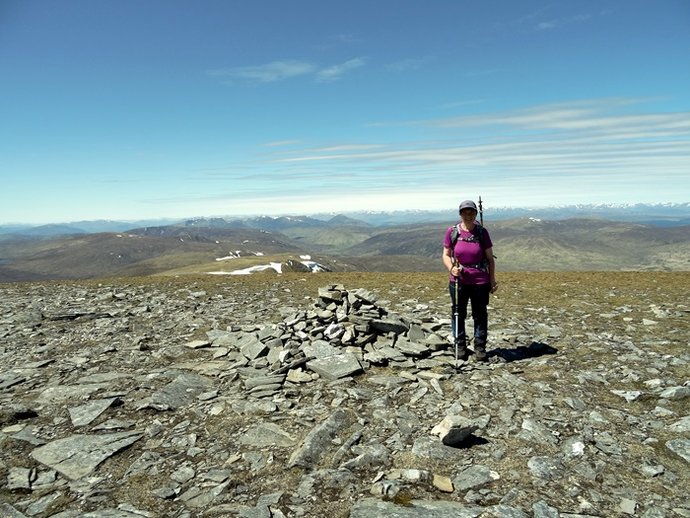 The summit cairn on Stob Poite Coire Ardair, we nearly missed it!

From Stob Poite Coire Ardair there's a descent into the window and then the pull onto Creag Meagaidh itself but this is not a particularly steep pull up just loose and a bit eroded compared to the terrain already covered. Creag Meagaidh from STPA you can see the climb up in the middle of the photo.

We stopped at Mad Megs Cairn for a quick photo and then set off for the summit, there was still a lot of snow up here, more than you'd expect when we are nearing midsummer but I think this year is an exception as far as late snow is concerned. Denise on her way to Mad Megs Cairn, loadsa snow. Nearly there, winter in summer. Great views all around, towards the Grey Corries and the Ben At the summit the plan came into play, we'd taken 4.5 hours to reach Creag Meagaidh's summit so I asked Denise if she fancied adding another munro to the walk and suggested Beinn a'Chaorainn, it looked along way but looking back at the distance we,d walked from Carn Liath it didn't seem to be too far so, all agreed, we set off, well we might as well take advantage of the brilliant weather. The summit at last.

The walk over to Beinn a' Chaorean was over similar terrain as to what had been walked already, we headed for Bealach a' Bharnish which is a bit wet then started the steady climb up to the summit,this was steady away and 1.75 Hours after leaving Creag Meagaidh we were at the summit, not bad. Approaching the summit of Beinn a'Chaorainn Denise on the Summit, Creag Meagaidh behind. Big cornices, looking over to the second cairn on the 1049 m top Looking back at the route, its quite a walk and that's not all of it.

We phoned Richard at the summit and told him we'd be at Roughburn in about two hours so please come and get us, great things these mobile phones they help when plans are changed especially when you can let folk know.
After another long descent (much easier than the one off The Ring of Steall) we were down at the roadside exactly two hours after leaving the summit and Richard was there waiting for us with a couple of cans of Lager and a change of foot wear, brilliant.
Another fanatstic day in the Scottish mountains, We've been lucky so far this year, not bad considering the recent weather patterns.

Well done for getting to 100, Martin

Well done Marts great achievement, next stop get Denise there too

Lots of snow up there, must of had a lot at Creag Meagaidh this year. That's nice circuit for the 100!

Congrats on the 100, and what a brilliant day and route

- I'm pondering an adaptation of that - thanks for the ideas

congratulations on getting to #100