Fionn Bheinn is a Fannich in geological terms, but stands well apart, while the "Cool Kidz" Fannichs, with all their airy ridginess, laugh and tease at the spotty little oik on the wrong side of the Loch. However, everything has it's niche and Fionn Bheinn's role in life is as a quickish half-day filler on a trip somewhere else, but only on a clear day as the joy is in the view from the top, not the ascent (which is dull, no getting away from that).
Reading the other reports on Fionn Bheinn, it doesn't get many laughs, but I guess many have the misery of climbing it's wet grassy slopes on a cloudy day. I was much more fortunate, and was grateful to have fine weather as I left the car at 2pm after a nearly 8 hours trip from York.
Tricky as it was to tear myself away from the wild temptations of Achnasheen, the path was easy to find as per the WH instructions and after a climb by the stream I strode over grass and peat to the south shoulder, and then skirted across to gain the summit ridge; there really isn't much more to be said about the route, other than don't do it in the mist if you can avoid it because the views are amazing when you get to the top. 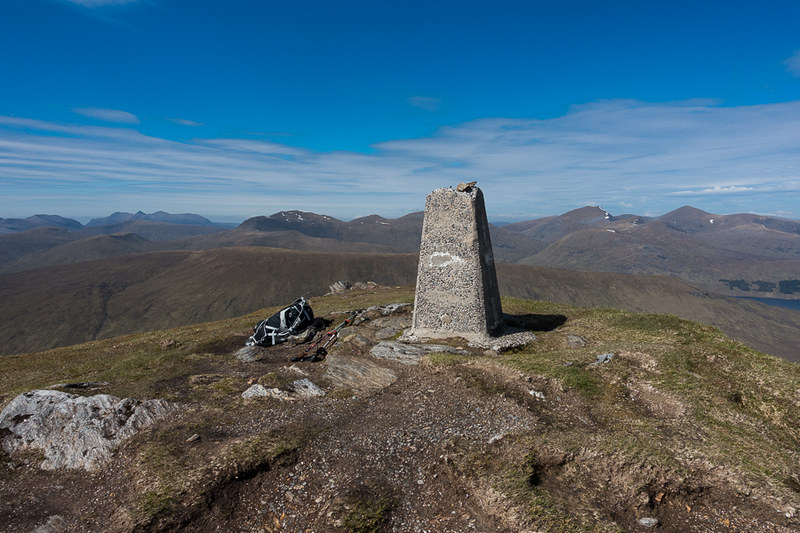 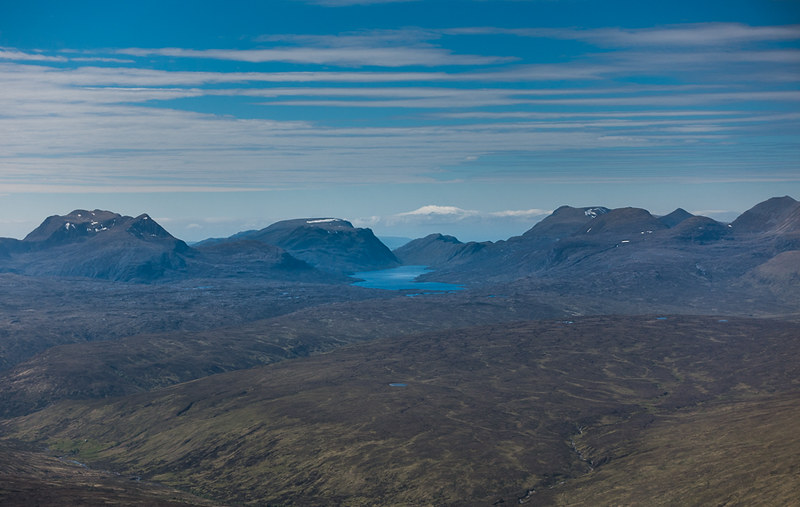 Liathach and Beinn Eighe - the destination for the next two days 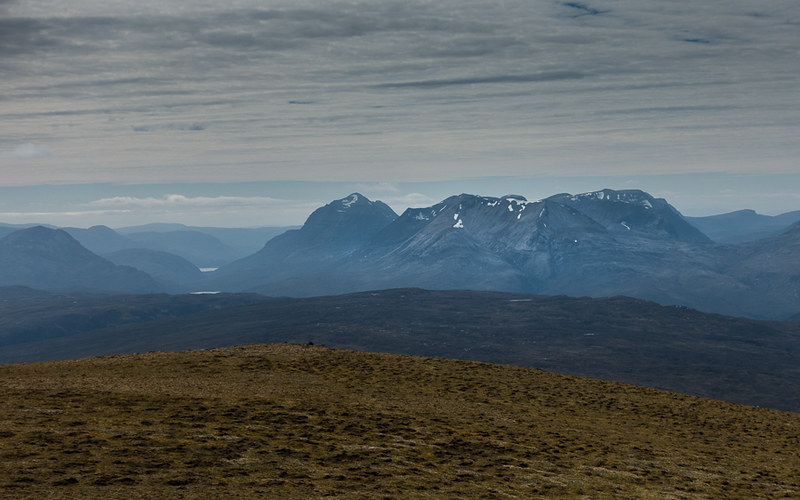 Obligatory pano (sorry Andy), from Torridon round to the Fannichs via Fisherfield & AT:

Some Fannichs (not done any yet, and the map's upstairs, so go figure): 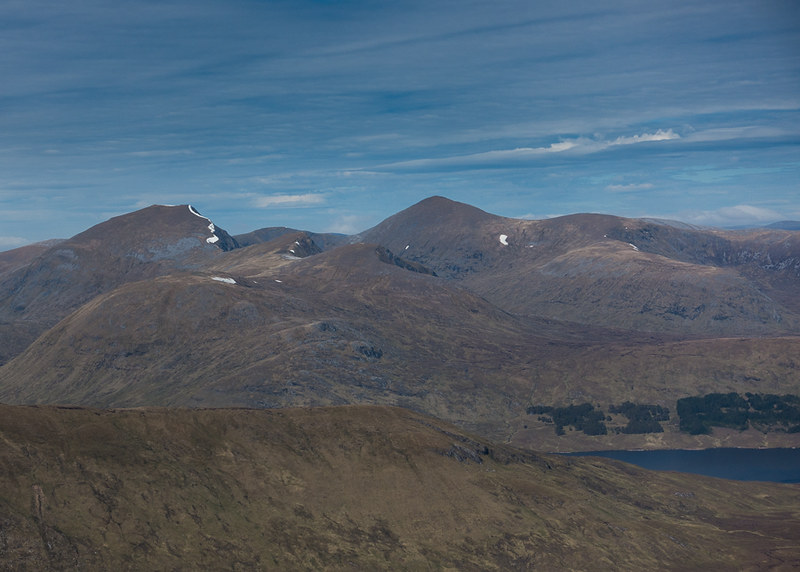 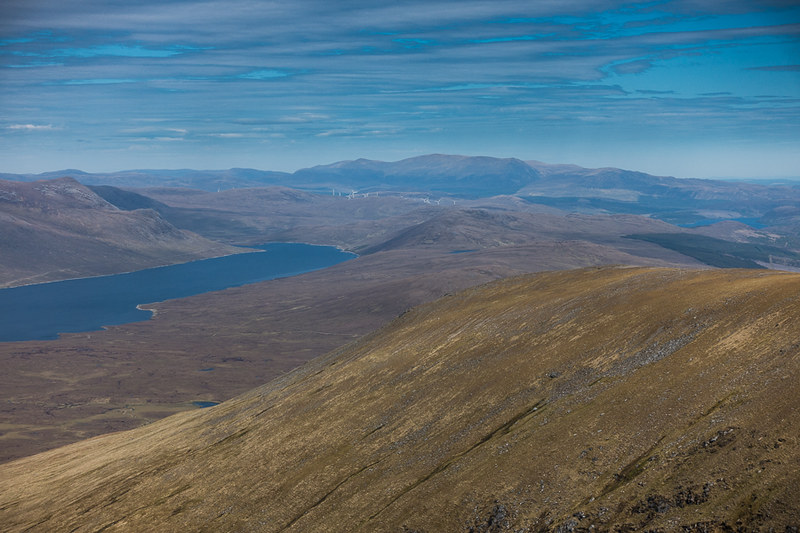 The north east Coire that gives some interest to the summit: 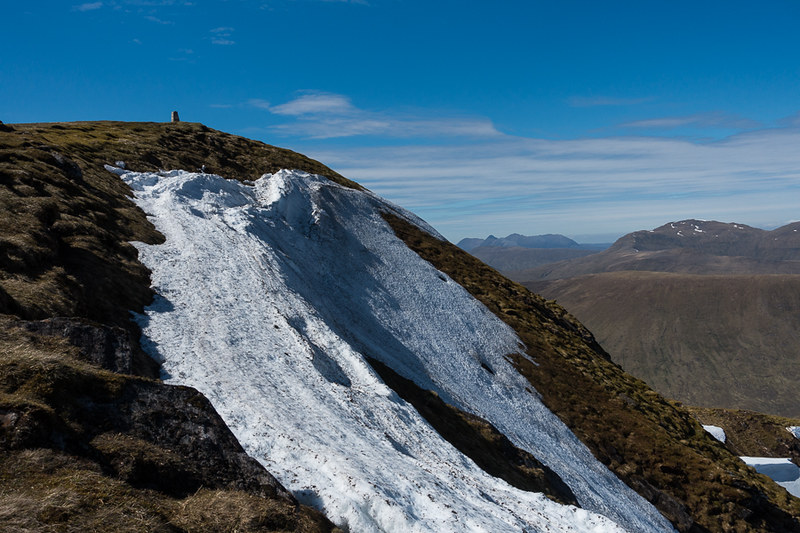 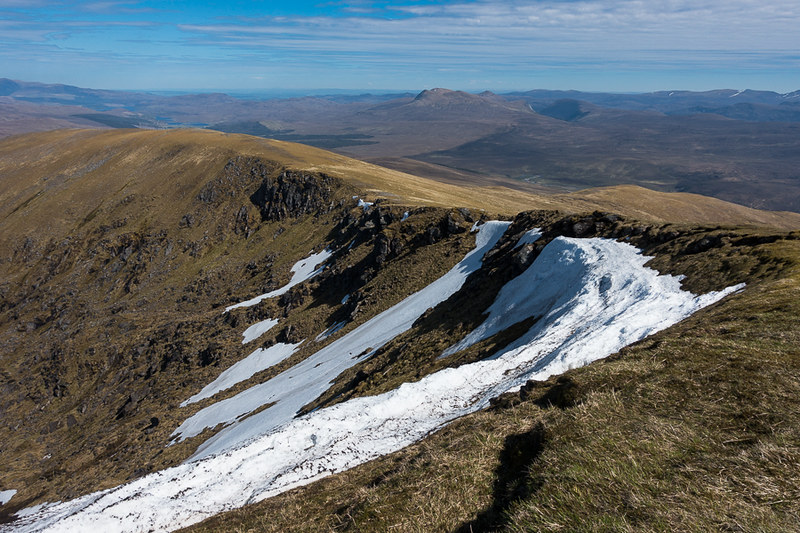 So there you have it. We climb Fionn Bheinn because a) it's over 3,000 feet and therefore meets the requirements, and b) because it's a fantastic viewpoint for the greatest hits of the magnificent north-west Highlands. You're on centre stage in a magnificent amphitheatre of mountains, much like being on the summit of Beinn na Lap (another uninspiring climb), where everywhere you turn there's mountain porn galore.
Down to the motor three and a half hours after leaving, and it was off to Kinlochewe to meet up with londonwalker, who I was hoping would have had the crumpets toasting nicely (he didn't, but the beer was a fine substitute - thanks Andy). We settled down for much nattering, drinking, chilli-eating and stove re-designing (another time).

I've not done this one yet but it's photos like this that prove there is no such thing as a dull Munro - they are absolutely gorgeous! Worth climbing 3000 feet just for a peek at that 2nd photo's view!

Agree completely, as your photos show it's a stunning view point

Gales , blizzard and no views for me on this one thanks for posting the reality ....nice

Didn't find this one dull at all. As your photos show, the views are great.

There is a school of thought that hills such as Fionn Bheinn - "dull", rounded and a short day - should be left for a bad weather day.

Your report & fine photos prove just the opposite, which is what I believe too. If a hill is rounded and fairly featureless, that means its finest attribute is likely to be views, so why would you want to do those when the cloud is down.

We were lucky to do this one on a crisp winter's day under blue skies. It was superb.

Mal Grey wrote:here is a school of thought that hills such as Fionn Bheinn - "dull", rounded and a short day - should be left for a bad weather day.

I've been promoting FBheinn as a clear day walk since I climbed it. Such a superb viewpoint should NOT be left for a bad day.

Nice to see the panoramas again, the Fisherfields look splendid! I will definitely repeat this mountain in full winter conditions

I totally agree. I don't like walking in crap weather anyway but had a similar day on Fionn Bheinn. It was a plan B due to oversleeping and wanting a short day, the weather was stunning and views great.

I think so called boring hills are usually regarded as such because people leave them for crap days but if you pick your day can be wonderful. For instance the East Drumochter two which we did on a glorious winters day.