Tha mi a tighinn faisg gu an deireadh agus abair rathad ........ Moving onto the final straight with these Munros and with a decent finishing run to complete of good groups to reach that magic number decided to undertake this round on Monday.

Set of late 11am and decided on anti clockwise route via Gleann an Sguab and an idea to overnight on Eididh Clach na Geala or Seanna Bhraigh ,take in the sunset with a beer or two before walking out the next day .

Ach dhìochùimhnich ... but I forgot it is only Summer yet ! An easy route up to the Bealach with weather overcast more like the back end than Summer but dry. Bha an sgothan a' bristeadh ...... cloud was coming and going by the time I reached the Famine dyke and the shoulder of Beinn Dearg An easy shift up onto Beinn Dearg having dumped the pack at the dyke , although no views to be had other than the cárn A quick return down saw the views begin to clear nicely although Beinn Dearg held onto most of the day and a clear route over to Cona Meall , into Coire Grunda and distant Seanna Bhraigh A long haul form here to Eididh Clach na Geala and I had thoughts of maybe pitching for the night on the Bealach between her and Meall na Cnapraichean but I could see a bank of cloud heading our way and decided to push on to the summit with the mist not taking long to reduce visibility to zero ! From the summit I took a NE bearing which eventually took me out of the ceo and above the Cadha Ruaidh avoiding crags either side which looked pretty fierce , pleased to site the Cadha and time to look for a camping spot lower down Abair rathad fada .... a long enough haul , damp ground and with wind strengthening but more smirry showers we soon pitched up in a hollow by the a burn 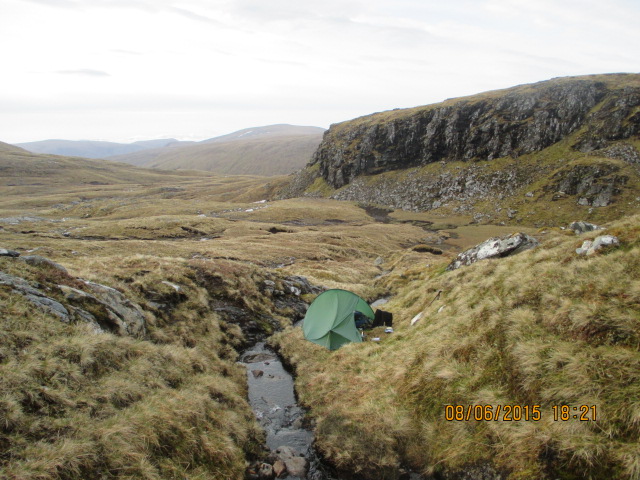 A reasonably comfortable night saw me asleep by 9.30am with only the noise of the water and the wind fairly brisk but not hitting us in our wee spot which was well sheltered .

Up and off at 8am in what looked like another misty day but I could tell the cloud was likely to break .... it did just as I took a bearing from the North top to Seanna Bhraigh itself We spent a fair while on the summit and a fine mullach and enjoyed the grand coire ,she is and a hard spot to reach Seanna Bhraigh , fairly remote indeed .

The walk out was long and a wee stop for tea helped break the exit up at the halfway mark. This is a good round and we were lucky enough with the weather , I guess navigation could be tricky if in constant mist /cloud especially around the Cadha Ruaidh below Seanna Bhraigh and I was glad I ticked Am Fhaoghach off in the Winter ! . Wester Ross suffered greatly between 1845-49 and the significance of An Gáradh Gort (the famine dyke) should not be underestimated , having being built by destitute Gaidhealachd families to mark sheep walks on land stolen from them in previous years, in return for meal to keep them alive .

It is a reminder for me not to forget the British State sponsored ethnocide of our people , nor the theft of our land and assets .

One day we will have our reparations .... thig an latha . Nice trip,shame the weather wasn't better.
Please fix the time on your camera I was confused

Collaciotach wrote:A reasonably comfortable night saw me asleep by 9.30am ....

Not many to go now.
Great walking area and also for a camping trip - one of my favourites - just a pity about the weather - cheers

Aye, pity you didn't get the views or weather your efforts deserved. A nap hand to soften the blow though.

Your getting there Colla, a fine way to see these mountains

Giant Stoneater wrote:Nice trip,shame the weather wasn't better.
Please fix the time on your camera I was confused

It has been removed

BoyVertiginous wrote:Aye, pity you didn't get the views or weather your efforts deserved. A nap hand to soften the blow though.

Going to pick n choose the days for the last ones ..... sunny and clear only ....could take a while to "complete"