Rough winds do shake the darling buds of May - An Caisteal

Rough winds do shake the darling buds of May - An Caisteal

Well this trip up An Caisteal and Beinn a Chroin did get me wondering if the English Bard had spent his missing years sampling the joys of Munro bagging.

The forecast was for sunshine and 'gentle breezes' (from yo.nr – which leads me to believe that the Norwegians have a different idea of a 'gentle breeze' from mine). The plan was for these two hills with an option on Beinn Chabhair. Well the best-laid schemes ... gang aft a-gley – and today was no exception. Living in the far north we didn't realize that the layout of the A82 just south of Crainlarich had changed and that there were engineering works (a new hydro scheme I think) just beyond the new roundabout. These engineering works cost us about an hour as we tried to find the lay-by at the start of the walk – this did include a test walk to see if we could get to the underpass from a different stopping point, only to discover a field of cattle, with calves, between us and our goal. Not going through that with 2 dogs, we thought. Added to which the promised sunshine looked more like threatening clouds and clag on the tops.

After much pondering and perusing of the map we figured out where we should have stopped – in the works site for the hydro engineering. So we drove slowly passed the site to realize that yes there was a parking lay-by open to the public just at the entrance to the site. OK then that's that sorted, and an hour late we started walking, but that lost hour did make the option on Beinn Chabhair seem unlikely. The good side was that the clouds were beginning to lift.

Many years ago we had an abortive attempt on these 2 starting from Darrydarroch, with a real bogfest across to the southern slopes of Twisting Hill. The start point advised by WH was wonderful in comparison – even allowing for ugly track being created by the hydro works – looking like a minor road here. 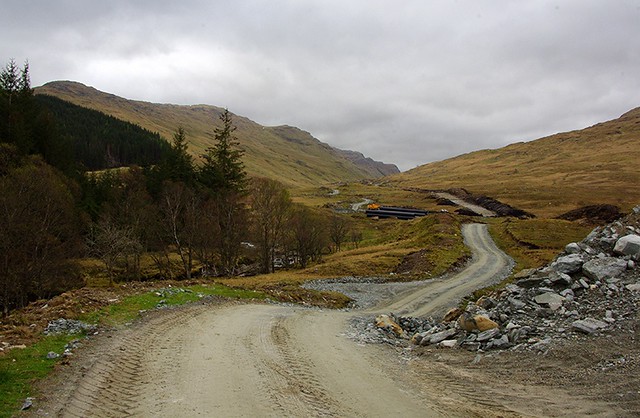 After the faffing around to get started we were happy to follow the track and had no difficulty finding the turn off to make a gentle diagonal climb up the northern side of Twisting Hill. As we did the views to the north west started to open up, the clouds drifted higher and the day was beginning to look altogether happier for the humans, 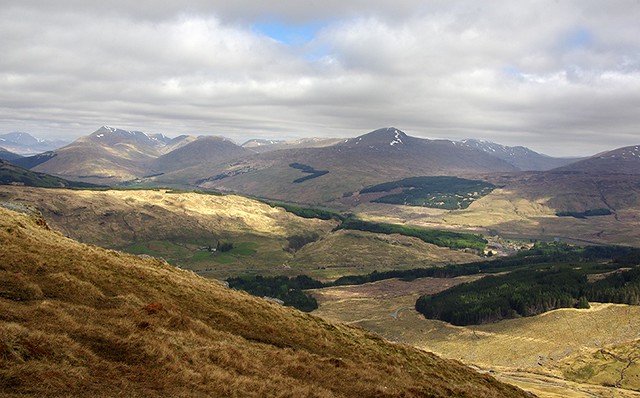 but there were sheep grazing on the hillside so B&B were kept under firm control. 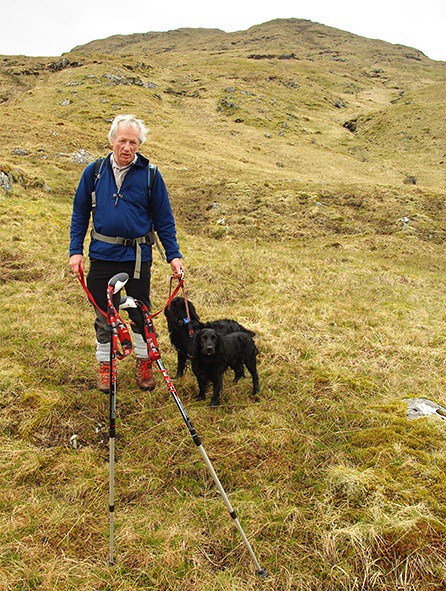 We kept a long diagonal route up the side of the hill to keep out of the wind – which was strongish and bitterly cold, eventually we topped out onto Twisting hill and onto the clear path to the first summit of the day. By now most of the cloud had lifted and the views in all directions were beautiful.

First sight of An Caisteal's fortress 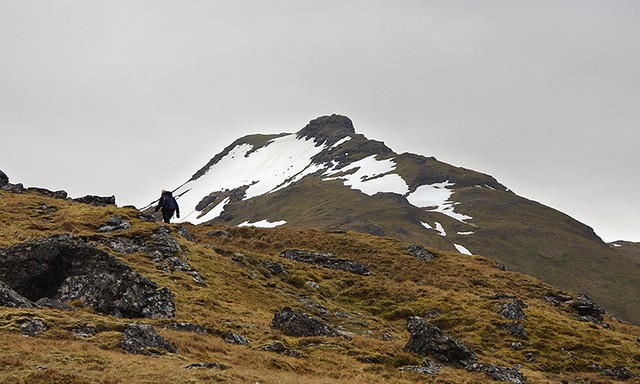 Looking along Twisting hill to the Bridge of Orchy hills 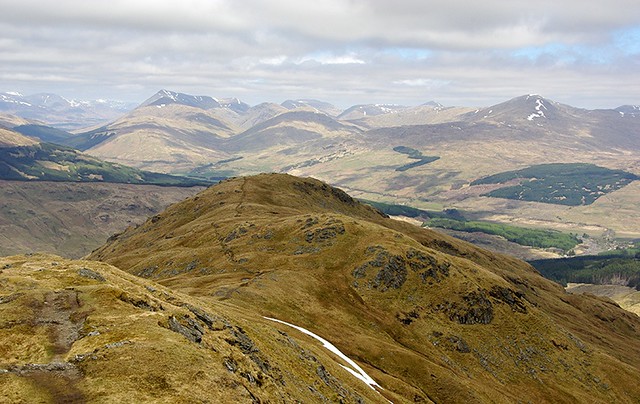 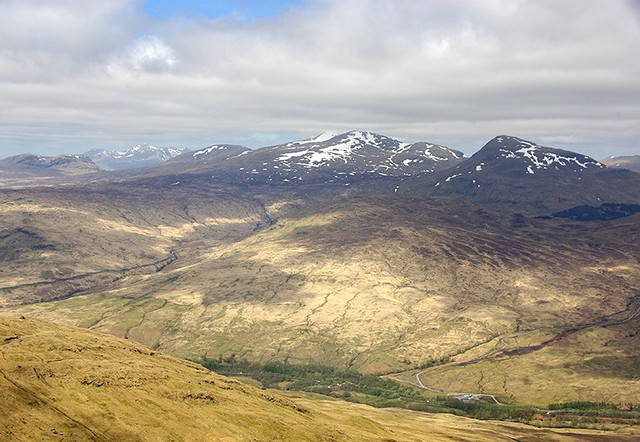 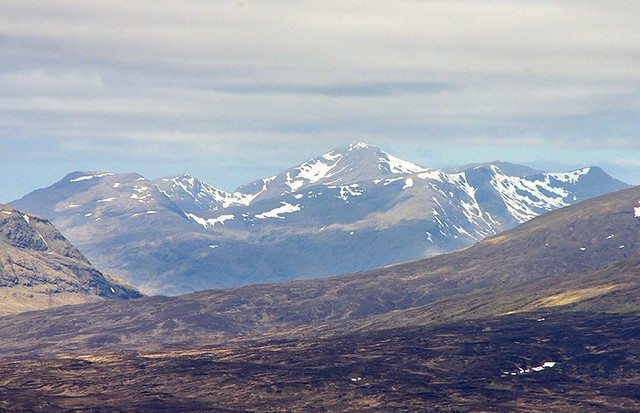 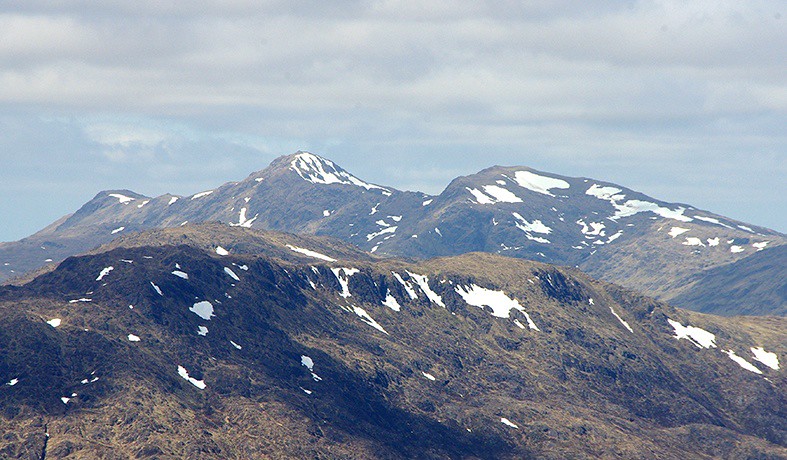 Only Ben More and Stob Binnein still had their heads in the clouds. 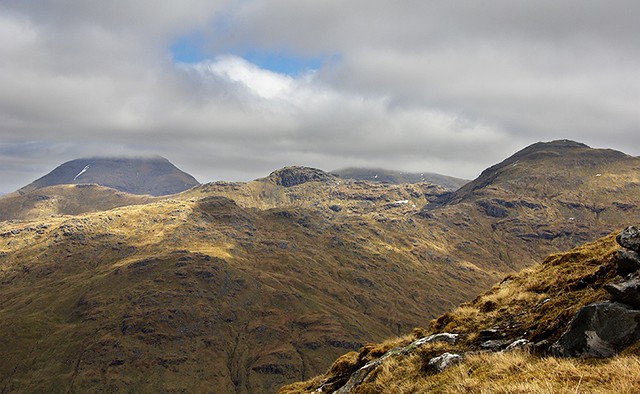 And canine relief – no sheep up here – freedom!

We followed the path across a snow slick, 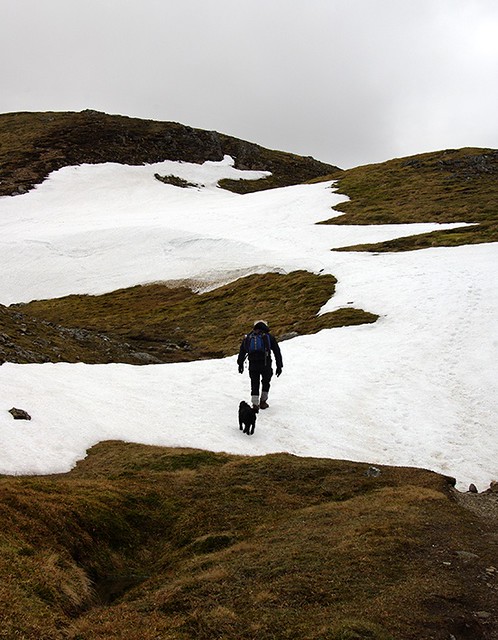 over the bad step (no problem for dogs) and to the slight scramble section around the tor and onto the summit of An Caisteal. The rocks were wet on the scramble so I ended up with rather wet gloves – which were to give me a sharp lesson in the consequences of wind chill after lunch.

Ben Lomond from the tor 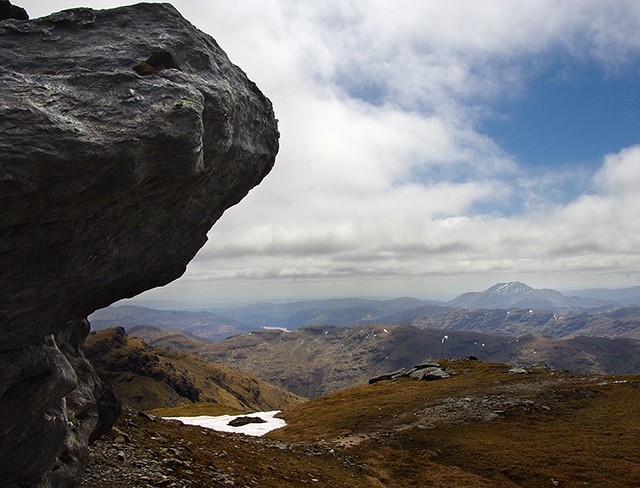 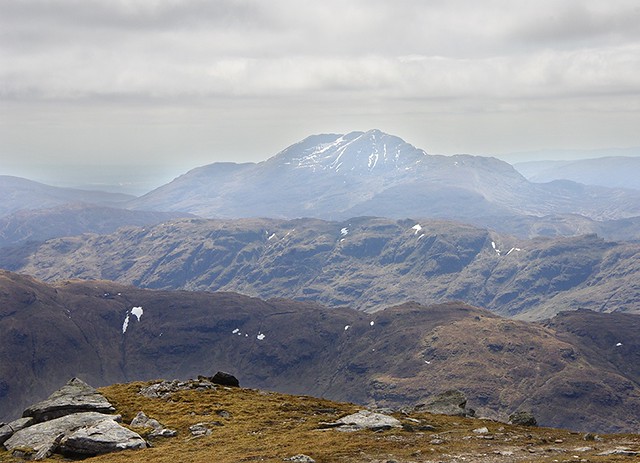 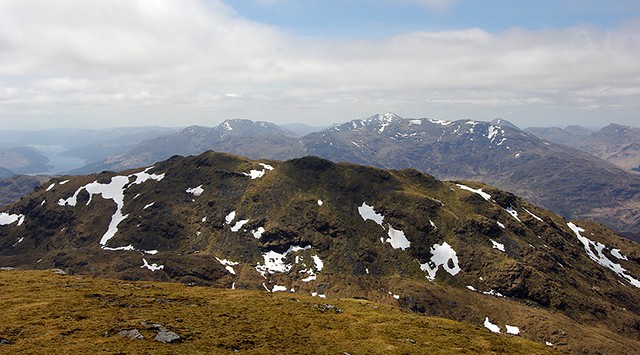 On the summit we met someone on holiday from England who had come up from Darrydarroch and told us what an unpleasant bogfest it was. We chatted for a while but despite the sunshine the wind was bitterly cold and we soon split up to find what little shelter there was to have some lunch. We decided to pass on the option to include Beinn Chabhair. The reality is that the DIY we've been doing since March (and which is still ongoing) has kept us off the hills and in my case has had a really negative impact on my fitness. So it will be a return trip for Beinn Chabhair. The positive side is that I'm really enjoying the Crainlarich hills so a return trip is not a hardship.

So on to the next goal of the day, Beinn a Chroin. Dropping down to the beallach the wind and wet gloves were making my hands painfully cold, so after taking this photo of the route to Beinn a Chroin 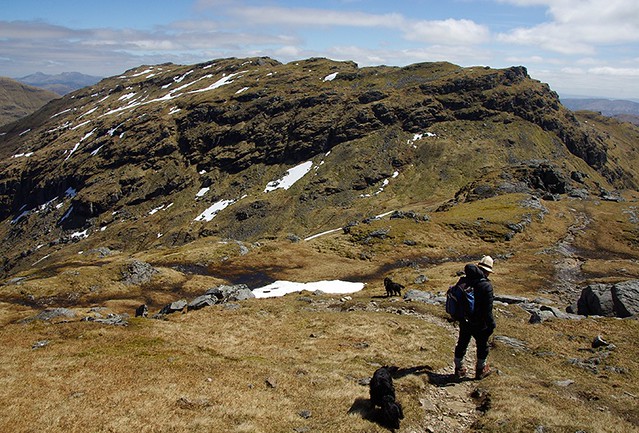 I stowed the camera and got out the winter gloves, lined and waterproof and very very cosy. There's a wee scrambly bit up Beinn a Chroin which is the only place where we've had to give our dogs a helping paw, only to have them stand on the ledge above and watch their humans faffing about trying to get up – couldn't find good foot holds so it was a case of upper body heaving to get up to the dogs, who in the meanwhile were barking (fairly critical) instructions to us.

Once on the summit ridge the walk turned easy again. We passed bonny looking lochans, 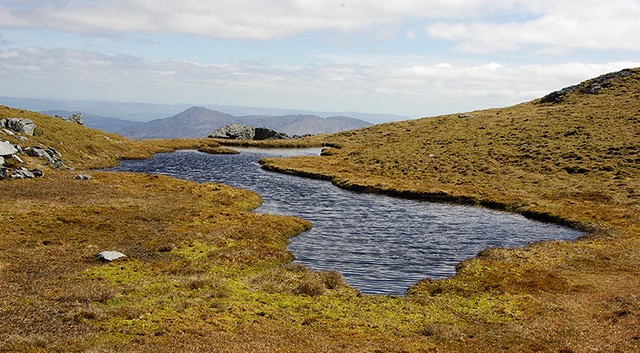 including one that looks like a bird of prey in flight 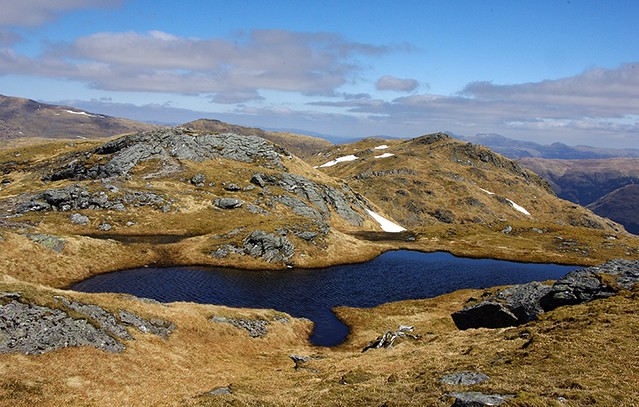 Got views back to An Caisteal 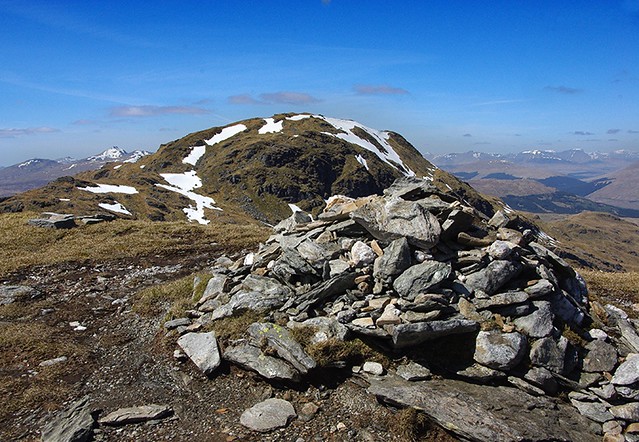 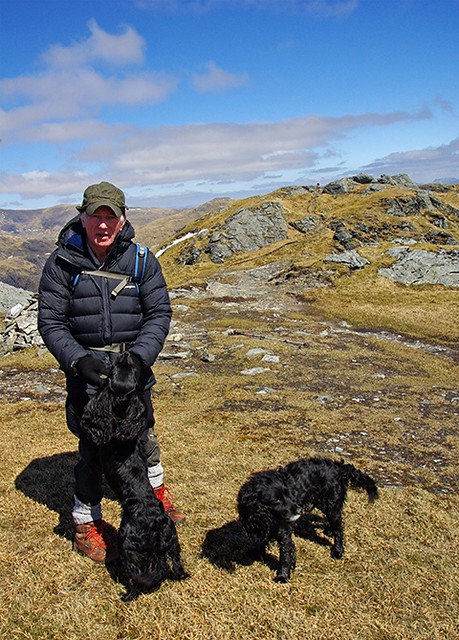 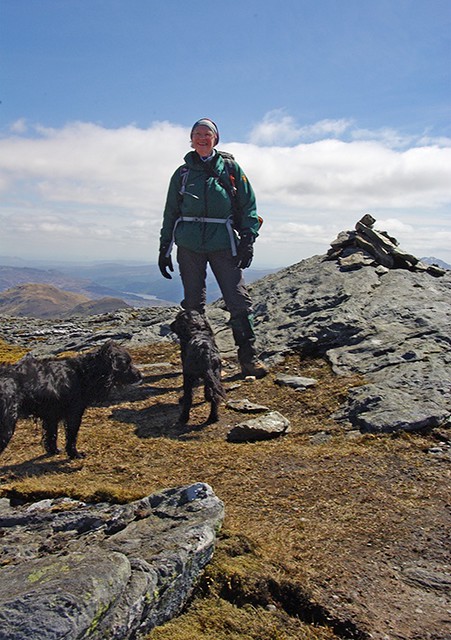 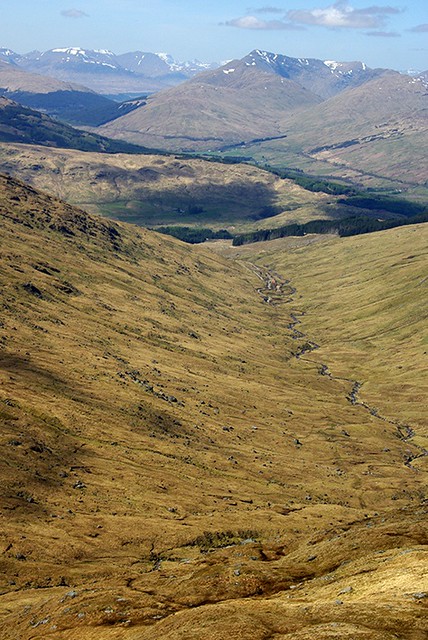 The path down was straight forward – a bit relentless and boggy in places. 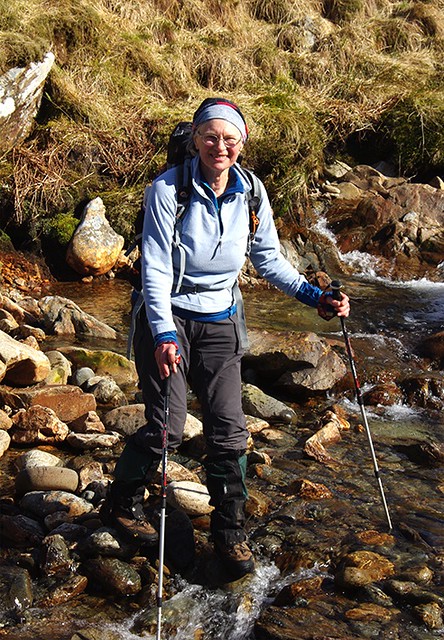 and found one of Scotland's most photographed erratics 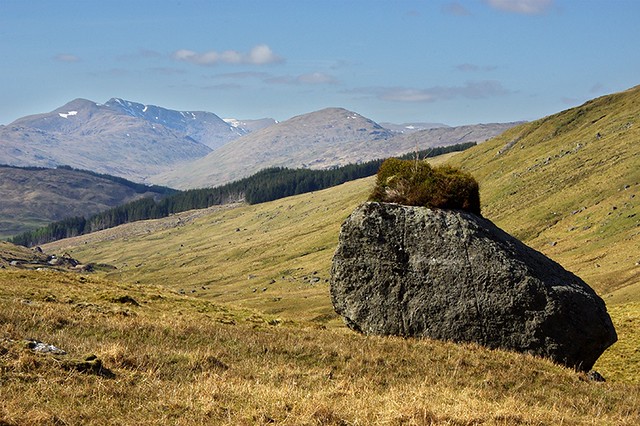 and just behind it a less photographed, but interesting example of rock formation. 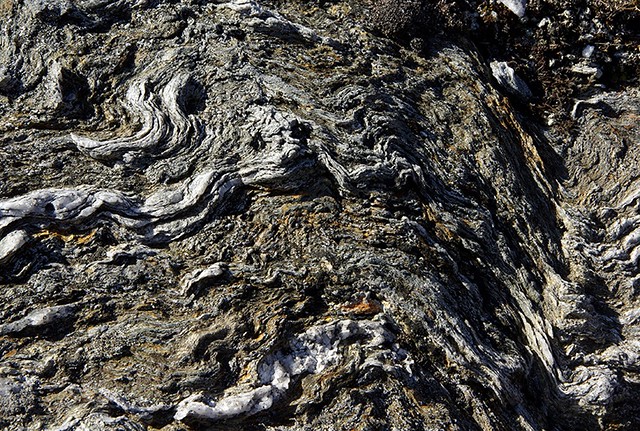 We wandered down the path and onto the hydro road, then back to the car in a lovely evening and out of the wind. Sadly we were retuning to do more of the dreaded DIY back in Dundee and but we were very glad of a day's respite on a pair of really enjoyable hills. At least the DIY project is giving us a chance to explore parts of the country I don't really know.

Your frozen hands make it seem a far cry from the heat of last week on same Crianlarich hills!

It's no hardship having to go back for Chabhair, it's a right fine summit in my opinion

Glad you got a break from DIY

Great photos - certainly looked a nice day despite the cold. Weather has been strange - like you am still wearing winter gloves, even got caught in a snow shower yesterday and not even at munro level

dogplodder wrote:Your frozen hands make it seem a far cry from the heat of last week on same Crianlarich hills!

You're right, the problem then was overheating - I didn't have your foresight in bringing shorts

Beaner001 wrote:It's no hardship having to go back for Chabhair, it's a right fine summit in my opinion

Glad you got a break from DIY

Yes, your pics of it are very tempting, I really like this group of hills and we'll be back in the south next week so it's on the to do list

rockhopper wrote:Great photos - certainly looked a nice day despite the cold. Weather has been strange - like you am still wearing winter gloves, even got caught in a snow shower yesterday and not even at munro level

It certainly makes packing the rucksack a chore. On our last outing I was prepared for winter and got a hot summer's day, so the problem was over heating, still it's always possible to strip off when the going gets too hot