My first attempt at Beinn Sgritheall had been in the winter months, a gorgeous day that belied the weather higher up and more importantly the snow conditions underfoot, on the steep approach up its south ridge. Windslab forced a retreat. I also remembered the steep ascent not just the south ridge but the approach ascent too and it was pretty much straight up so the return would be by the northern approach, the route of descent on the WH route.
Now I’m no fair weather walker

, as yesterday’s outing to Seana Bhraigh shows but I would suggest saving this one for a fair day. I knew the views would be good, its position right on the coast for starters, but before you even arrive at the start the journey via Cluanie and Glenelg over the Ratagan pass is a delight with sufficient views and photo opportunities you may not make it to the walk

View from Ratagan towards Beinn Fhada and A Glas bheinn. The start point has no parking as such although there is a small pull in with enough room for a single car and a cairn marks the start of the path that leads directly up above, one look up will confirm it’ll be a steep one.
Steep in short measure is fine by me, it gains height quickly, the wonderful views open up, but I couldn’t help feeling a tumble here would land me on the roof of my car

The view to Knoydart. You need make no excuses to stop on ascent the views are simply stunning, and even the ascent through the birch woods is delightful, and very soon over, although the ascent continues. Out of the woods and the first glimpse of the summit, and yes it is steep. But with just under 45 minutes elapsed I was at the crest.
Views now opened up.
Knoydart and Barrisdale Bay zoomed. Checking out an approach by canoe for these hills. The ascent continues, well of course it does

, with a couple of level sections to ease it slightly, but before you know the final assault looms large above. As you climb up the final slopes the steepness of this mountain reveals itself, plunging to the turquoise edged sea, inviting as it looked I had left the swimwear at home The path is good all the way up, with a couple of small boulder fields and you arrive at the summit, and what a vista in all directions.
The Torridon peaks to the left Alligins multiple tops through the peaks of Kintail closer to hand.

South with Ben Nevis centre, and too many mountains to name even if I could. The full route from road to lochan and up with Eigg and Skye. Skye ridge zoomed, with Alisdair, the Inn Pinn right across to Gillean all clear today. Knoydart with Ladhar Bheinn directly across, its two neighbours left and Sgurr na Ciche pointing to the sky across Barrisdale Bay.

The tiny village of Arnisdale below with the alternative ascent route.

The view down showing the steep flanks dropping straight to the sea. Cripes !! So all smiles today, it had taken 2 hours to reach the summit 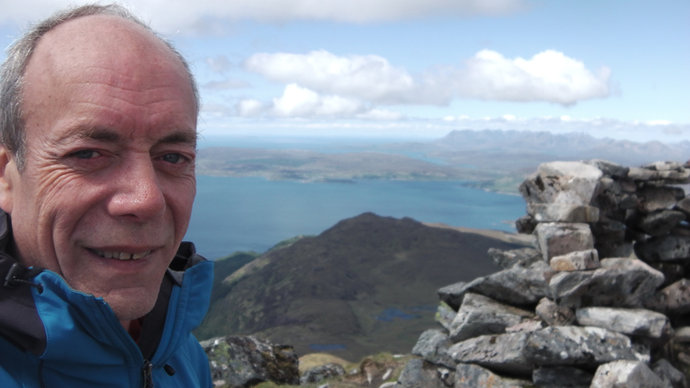 Despite the sun it had been fresh on top, jacket and gloves were needed, but descent underway things warmed up rapid and after the left turn at the cairn down into the woods which opened up more vistas not seen on ascent (head down I guess). And one last look back at Beinn Sgritheall. 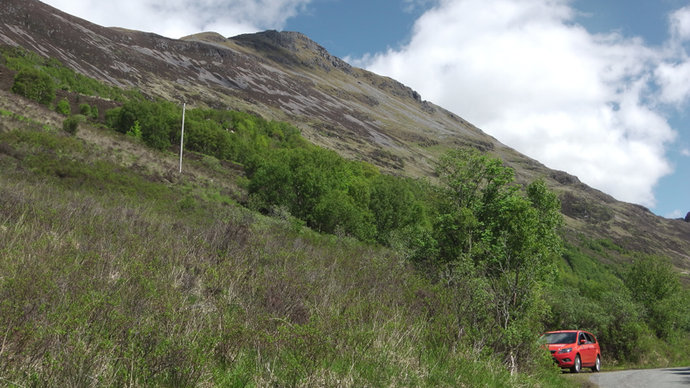 So this is one for a fair day, yes you could scoot up and down, it only took me 3 hours 15 to ascend and descend, but I was there much longer and had Sgritheall all to myself with the wonderful drive out ahead. How many days wasted putting things off, delaying doing something or another for one reason or another...this most certainly was not one of those, I wondered why I hadn't been here sooner (but you had in winter

I was going to suggest you'd missed a trick by doing Seana Braigh on Saturday instead of Sunday, but you seem to have made up for it here

Beautiful mountain and some great photos

Superb photos and a grand hill ,only got partial views on this so a return one day .

Great report. Totally agree this is one you HAVE to do when there's a view.

malky_c wrote:I was going to suggest you'd missed a trick by doing Seana Braigh on Saturday instead of Sunday, but you seem to have made up for it here

It did improve on Saturday, just as was cruising back along the A96, skies brightened to the west. Timing is all

Collaciotach wrote:Superb photos and a grand hill ,only got partial views on this so a return one day .

Many thanks all, nothing to do with me, its just the scenery, speaks for itself