That there is a route by the name of curved ridge on the wall of Stob Dearg seems impossible. The sheer face of the Buachaille looms, sentinel like at the head of that great corridor in the earth, presenting an impenetrable air. Graded 3 the ridge is the next logical step from the Aonach Eagach which we conquered not one month ago. 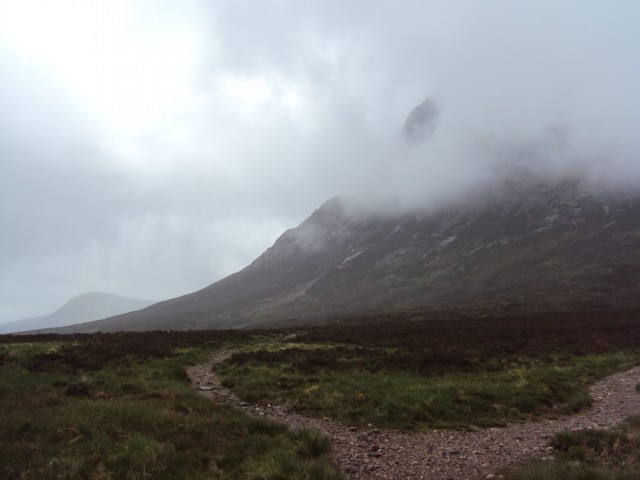 The weather as we left the central belt was blue sky and broken cloud, hardly ominous but as we approached Glencoe the cloud closed in and was holding only just above the summits. Leaving the car the air was damp as we made our way past Lagangarbh cottage, skirted the foot of the NE face and on to the marker of waterslide slab. Following the line of the water we soon gained height and the scrambling began in earnest with sharpened rocks and steeper ground. The path was less than apparent and with the numerous scree slopes it was difficult to discern route from rock. Despite this we gradually made our way higher, now rapidly approaching the descending cloud. Taking what we now know was a bad decision we ascended a gully directly below a sheer rock face and saw no apparent way across a deep gorge. Electing to descend back to what resembled a split in the path we gained the curved ridge once more, now certain of the correct route as the sheer face materialised as the Rannoch Wall. We had now hit the ceiling and entered the cloud with only crampon scratches to guide us. 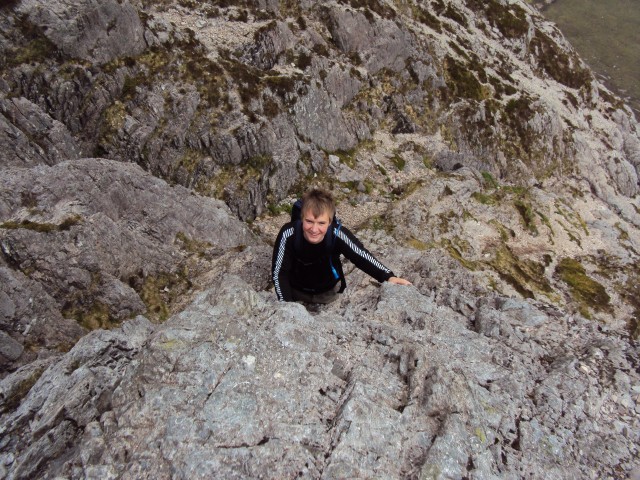 The ridge started to live up to its reputation as the scrambling intensified and the ascent of a near vertical section required us to balance on ledges consisting of no more than a foots width. To compound this the crux of the climb was now upon us as we gained the foot of a narrow chimney with no obvious holds. Requiring the firm placement of boot on smooth rock, perhaps the encircling cloud masking the exposure was now a relief rather than a disappointment. A few nervous moves later we gained the 'safe' ground once more and, after a brief scramble reached the cairn marking the summit of the ridge.
Crowberry tower was now off the agenda as the cloud had saturated the rock and thus we elected to scramble directly on to the summit, suddenly tripping onto the sheltering rock, exhausted but elated. A handshake and a sandwich later we began our descent of the Coire nan Tulaich. Losing height quickly the cloud lifted to reveal the glen below. The Curved Ridge was exhilarating to say the least but only left us wanting more and we resolved in the near future to move up another notch with the conquering of Castle Ridge, Ben Nevis. Maybe I should write my obituary now rather than later.

Hi Murphy,
Enjoyed reading that report. Got the heart pounding when you reached the shear rock face with the deep gorge.

. Think I'll be taking the tourist route on this one for the time being though.

Well done though and the pics are great.

Sure the likes of Smith, MacInnes and Marshall were watching you, egging you on....nice one!

Hitting Creise on Thursday this week, hopefully I will get a better view of what I climbed. Thinking about the Inglis Clark ridge, any thoughts?

Well done on that one anyway - it's way beyond my capabilities unfortunately... that pic of Coire na Tulaich and the low cloud is absolutely superb - really atmospheric! Stunning!

murphy999 wrote:Hitting Creise on Thursday this week, hopefully I will get a better view of what I climbed. Thinking about the Inglis Clark ridge, any thoughts?

You might want a rope for it, and of course know how to use it

Users browsing this forum: Alan B, Andihorne, hairywol and 90 guests