Factor 40 and the Drumochter Four

Factor 40 and the Drumochter Four


Note: I don't carry GPS so the distance and ascent figures I've given are approximate based on other reports I've read.

This was my third trip to the area in as many weeks. The first was for the Sow of Atholl followed by a quick recce up to the cairns on Geal-Carn. The second an attempt to do at least Geal-Charn and A'Mharconaich which was terminated prematurely due to wind, horizontal rain, zero visibility, and negative levels of enjoyment. Finally with the high pressure and superb visibility last week, there was an opportunity to do all four and this time there was no turning back.

I left the car around 09.20 am at Balsporran with the aim of being back somewhere between 5 and 6 pm. This used to be a bleak spot, but with the renovation to house and garden, it's been totally transformed. Start of the walk from Balsporran with the path on the left ascending the shoulder of Geal-Charn.

Once across the railway and about five minutes walk up the path you come to a junction with a sign-post weathered blank. Continue left on the path across a bridge, and eventually you reach the next junction where you take the right-hand fork. The path is still under construction, and after five or ten minutes walking it ends abruptly and you are onto finest Drumochter glaur. Actually it was a lot better than a couple of weeks ago and I got to the cairns in around 50 minutes or so. The cairns on the shoulder of Geal Charn with Schiehallion ever-present on the horizon.

I've seen these referred to as the "memorial cairns" or "seven cairns for seven brothers". Hamish Brown calls them the "stonemen" and they were clearly in much better nick when he did his walk in the 1970's. If anyone has the full story, I'd be interested to hear it.

Once past the cairns, it was a pleasant 15 minutes walk to the summit of Geal-charn and the first view down Loch Ericht. Summit cairn on Geal-charn and the view south-west down Loch Ericht. It was warm by this time and a layer came off, Factor 40 went on, and my sun-hat was retrieved from it's winter refuge at the bottom of the sack. Whilst doing this, I was joined by a second walker who'd left Balsporran a few minutes behind me. He was also aiming to do the four so we chatted for a while before setting off. Our routes and schedules were slightly different, but our paths crossed and re-crossed several times during the day. Heading off down the south flank of Geal-charn with Ben Alder magnificent on the right.

Once down around the 800 m contour you join a land-rover track that winds round the base of A' Mharconaich. 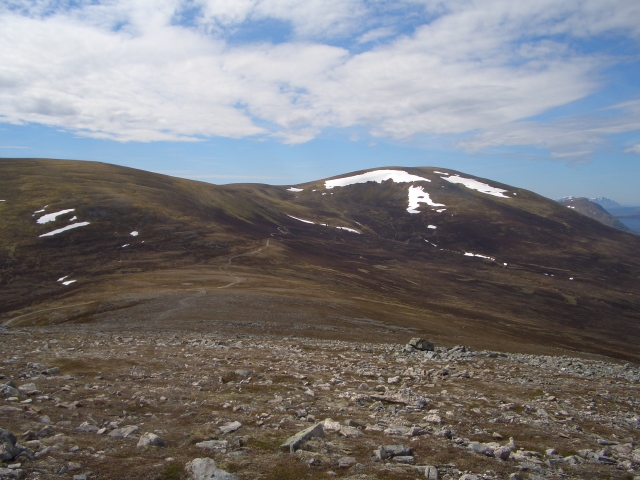 The land-rover track along the base of A'Mharconaich with Beinn Udlamain ahead.

I walked along the track for a bit hoping for a wee cairn or marker indicating the point at which to head south-east up onto the flank. And lo ... Turn left here and on up the flank of A' Mharconaich. Ben Alder lodge is across the loch.

Once up on the plateau, it was pleasant walking to the summit cairn of A'Mharconaich, which I reached about an hour and ten minutes after leaving Geal-charn. Along the plateau to A'Mharconaich. It was time for a snack and a bit of a view up through the Drumochter Pass. North through Drumochter to Meall Chuaich. The "summit" of Carn na Caim is somewhere in the folded quilt of hills in the foreground and there is probably someone blundering around up there trying to find it.

My erstwhile companion had caught me up by this point and had already left for the Udlamain summit. I dawdled to take more photos, the schedule was slipping, the walk became a stroll, but in weather like this, who cares. West to Ben Udlamain. The cairn was visible as a tiny pimple.

Made the summit cairn of Ben Udlamain in about fifty minutes and time for lunch. The multi-apartment cairn was already full with a couple of walkers and Molly the dog doing the four in the opposite direction to me, having walked down the A9 from Balsporran and up Sgairneach Mhor. I decided to walk west a little to get a view of the loch and I was glad I did ... By this time the schedule had gone totally out the window. I had lunch and just lay out in the sun. The silence was total and the visibility incredible. At 1.30 I told myself I had to go and packed up, but flopped down again reluctant to leave. At 1.45 I took a last look at the great wilderness around and behind Ben Alder and swore that I would get down there one day. Then I headed back to the cairn and on to Sgairneach Mhor.

There's a faint path running south off Beinn Udlamain that takes you down to the head of Coire Dhomain, across the burn, and then east up onto the west flank of Sgairneach Mhor. Looking east from the head of Coire Dhomhain.

Eventually you come to a cairn but you're not there yet. It marks the spot-height at 932 m. The wee cairn at 932 m looking back to the summit of Ben Udlamain.

From there, it's up onto the plateau ... Rolling prairie above the spot-height.

and then finally along to the summit cairn. The summit cairn on Sgairneach Mhor. Last of the day. Schiehallion centre and (I'm guessing) Ben Lawers on the right. East through Coire Dhomhain. The Boar of Badenoch on the left and the Sow of Atholl on the right. 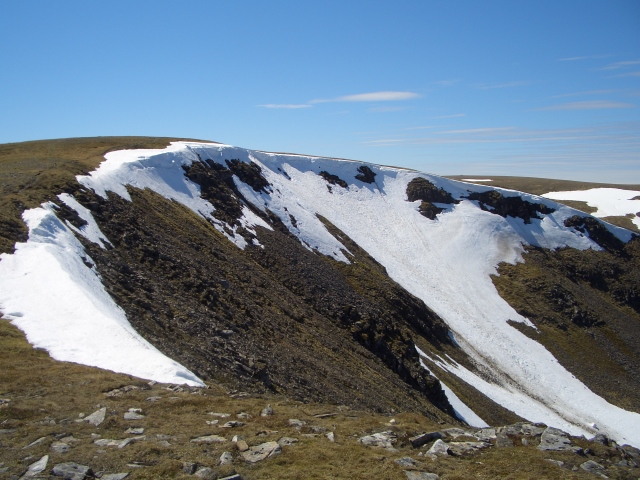 Last of the snows in Coire Greagach.

Coming off, you have a choice of routes, both now served by bridges connected to the main path. I just went for the upper (nearest) one. The way home. The nearest bridge is on the branch path in the centre.

Once down, the burn looked too inviting and you can guess what happened next. The walk out from this upper bridge to the railway underpass took 35 minutes. Then I slapped on some more Factor 40, took a deep breath and slogged back up the cycle-track by the A9, reaching the Balsporran car-park in 45 minutes. So I was back at around 5.15 pm.

These are not the most spectacular of hills but the weather, views and visibility made this a fantastic day out.