Various options for the corbetts in this area; multiple single trips means driving in between, cycle in from the east (Newton Bridge) or west (Ardtalnaig) meant ascent/descent by same route so had a look for alternatives. A loop from Glen Lednock seemed to fit the bill albeit that it would mean returning over Ben Chonzie – but it did allow for the addition of the Graham, Shee of Ardtalnaig.


Lednock 14jun20156 activelog.gpx Open full screen  NB: Walkhighlands is not responsible for the accuracy of gpx files in users posts

Up (very) early and drove via Comrie to the wee car park at Invergeldie. Not surprised to see no-one else parked at that time. Away from the car just on 0500hrs walking NW towards the reservoir. Light rain at this point with forecast not exactly inspiring until late morning.

Followed the track which ascended up from the start of the reservoir then more steeply northwards uphill until it turned into a more faint atv track.

NW over Meall Dubh Mor with some boggy ground en route. More persistent rain, clag down and nothing to see.

Arrived at the trig point on Creag Uchdag. So far the forecast was proving disappointingly accurate.

Now to get the best way to the Shee of Ardtalnaig. The map shows cliffs so basically two options – NE to Dunan then an up/down or head north over Meall nan Oighreag then descend eastwards. Opted for the latter and headed off.

Just after leaving the summit, the wind got much colder and it started snowing – must have kept up for about 20 minutes. Bit of a zigzag route here trying to get through a large area of boggy peat hags. There were to be quite a few areas of these throughout the day but this bit was probably the worst.

Clag starting to lift after turning eastwards and heading down towards the track from Ardtalnaig.

Crossed the track then straight up the hillside. Cleft in the rock at the top.

Then off SE in the direction of Dunan

View over towards Creagan na Beinne

Skirted to the north of Dunan, short section on the track then quite steeply up the hillside to the summit of Creagan na Beinne

Views to Lawers hills, An Stuc and others

From here the plan was to pick up the hill track over Lechrea Hill to get down to the River Almond.

Auchnafree Hill in the distance

Back down to the floor of the glen, continued eastwards. Past the monument marked on the OS map.

Had hoped to pick up a hill track which started around NN798334 but there was no bridge and couldn’t be bothered removing my boots.

Instead continued eastwards to the bridge at Larichfraskhan

Weather starting to clear up quite nicely now – hot when the sun came out. Followed the hill track steeply up Auchnafree Hill. 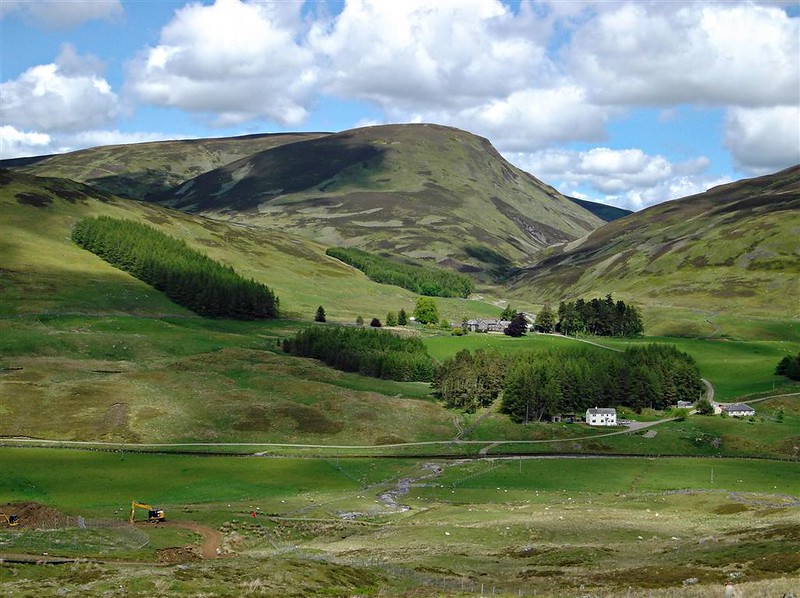 Track stops only a short distance from the summit.

Found two cairns – smaller one seemed to be higher than the larger one.

Now on the final leg – returning via Ben Chonzie. Headed west to the north of A’Chairidh then over Moine Bheag. Tried to stay high but had drop down to the track before the climb up to find the fence posts.

Followed the track up close to the fence posts

Arrived at the summit cairn and shelter – stopped for more food with the sun now quite strong. Then off SW to find the hill track back to Glen Lednock.

Fence posts at start of descent

Had run out of water so filled up in the wee stream just before getting on to the hill track – much prefer the filter to the bottle drops. Then back to the car for drive back home for a late dinner.

. I've looked at something like this before, as well as an overnighter approaching from Kenmore and finishing in Crieff...but I keep circling back around to the idea of cycling up Glen Almond. We'll see what the outcome is soon enough I'm sure. Anyway, big day in both distance and ascent

A grand route you indeed

Back to your best RH, nice round that

I’m glad the weather got better for you, on such a long day. You’re progressing steadily on the non-munros!

Enjoyed reading that, thanks, brought back memories of shorter tramps in the area

Great report RH but where the hell do you guys get the energy for this kind of distance over and over again, 13.5 hrs wandering over 44km would leave me on stumps

Looks like a great expedition: smashing report and pics of a long walk, done in double quick time! You must be training for a double marathon....

I don't know this area at all, so thanks for posting: it's always great to get a flavour of unknown places when mountain time is at a premium

I was expecting to see you pitch a tent when I seen the distance involved, but nope...nothing

Looks like you're back to big epic days eh - fantastic

A big round in a nice area. Lednock is an attractive glen.